It appears Nick Cummins’ gym sessions have paid off.

The rugby star, nicknamed ‘The Honey Badger’ flaunted his ripped physique while filming a date with a mystery brunette on Wednesday.

Show me the Honey! The Bachelor’s Nick Cummins flaunted his incredibly ripped body while on a date with a stunning bikini-clad brunette on Wednesday

The former Wallabies star’s bulging biceps and washboard stomach were on full display as he chatted to his mystery lady.

Nick and his date looked like the perfect match, as she also showed off a flawlessly toned body.

The young woman displayed her strong yet feminine frame in a semi-sheer black bikini which offered a generous glimpse of cleavage. 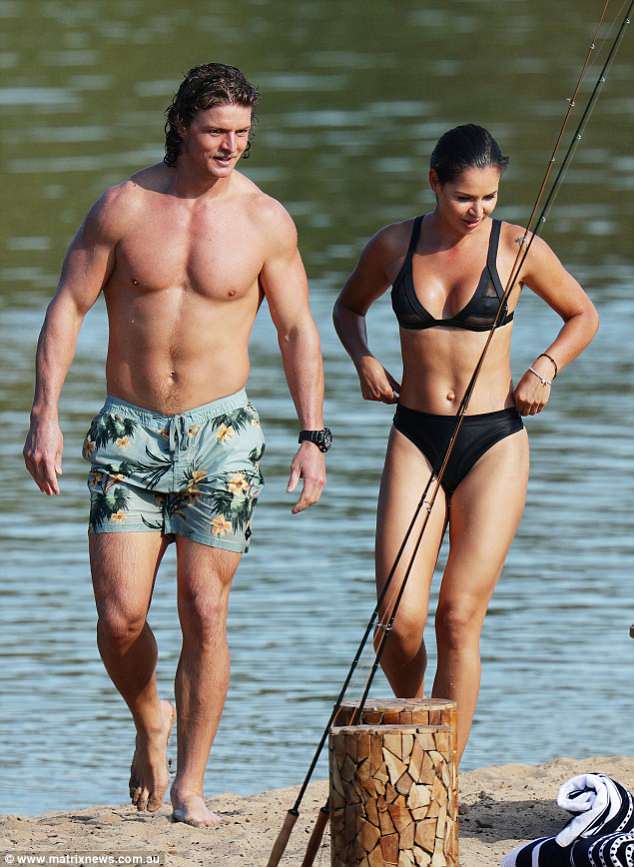 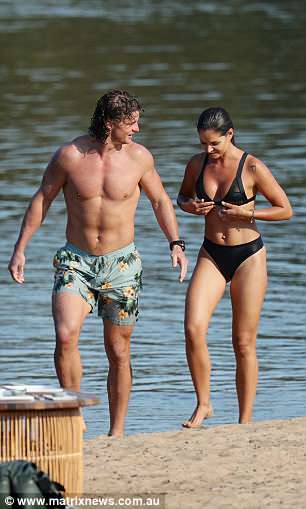 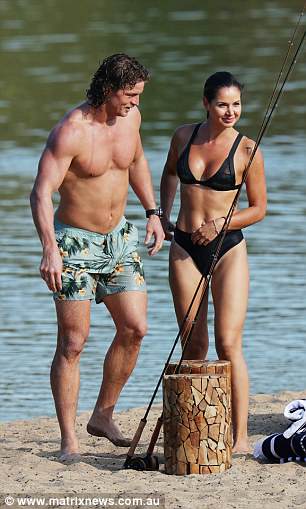 Sun’s out, guns out! Wearing just a pair of tropical-patterned shorts, Nick looked as though he was impressing his date with his well-sculpted physique 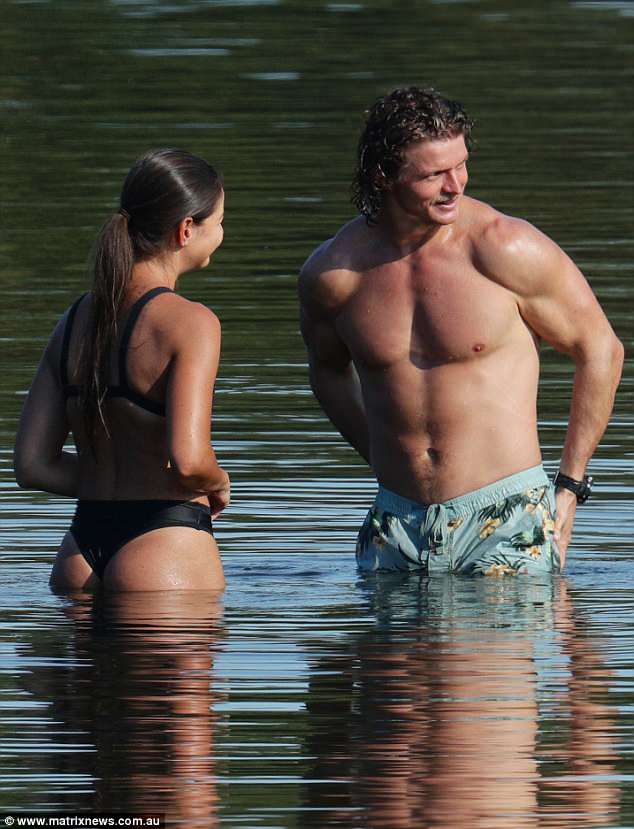 Woah! Nick’s days as a professional sports star was done wonders for his body shape

During the date, the genetically-blessed pair got up close and personal in the water.

As the cameras rolled, Nick gripped the woman’s hands tightly as they recreated a the iconic Dirty Dancing lift.

As she was swept up into the air, the female contestant’s peachy posterior was on full display. 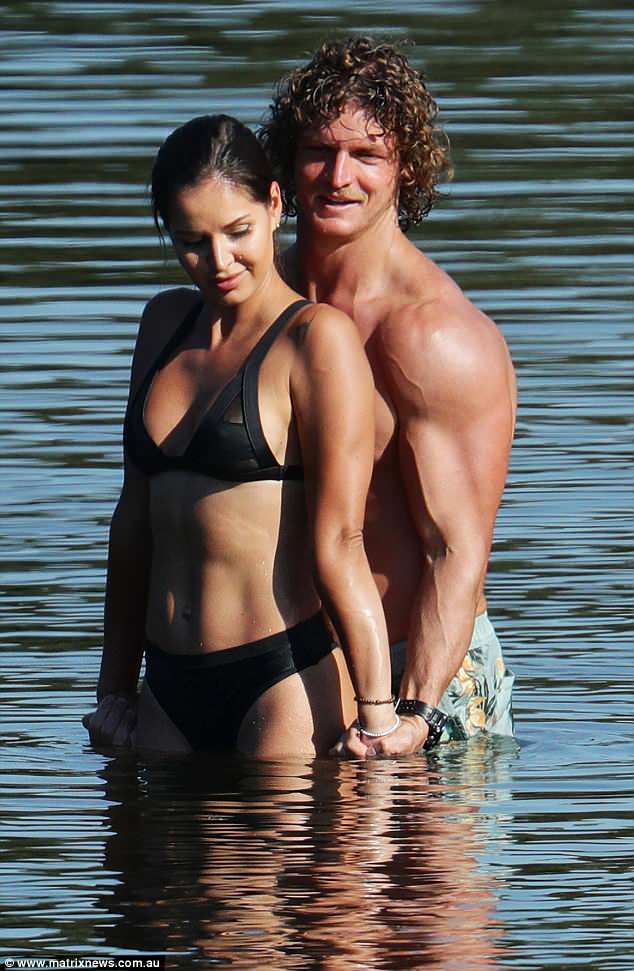 Getting steamy! As the cameras rolled, Nick gripped tightly to the hands of bikini-clad babe as the veins in his bicep muscles showed he was putting in his best efforts

Beauty in black! The mystery brunette’s figure was just enviable, with  as stunner showing off her curves in a revealing two-piece 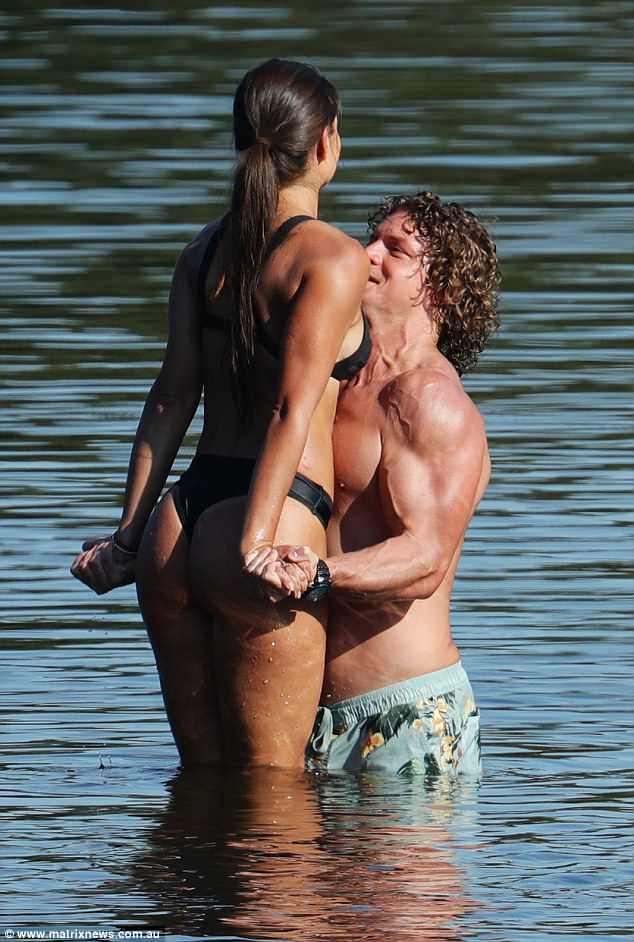 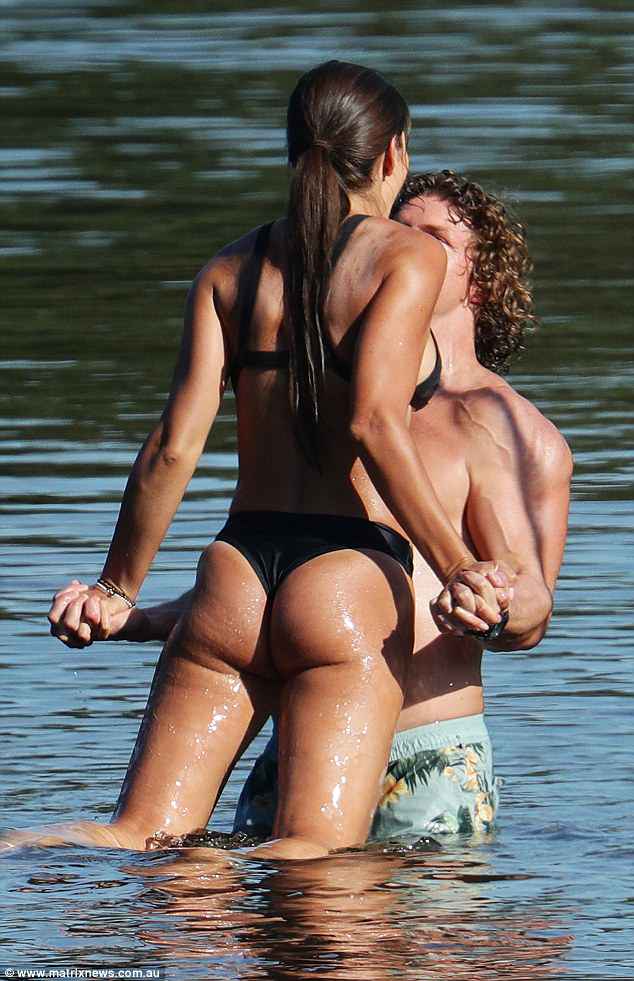 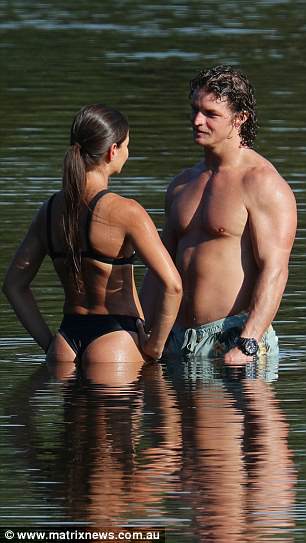 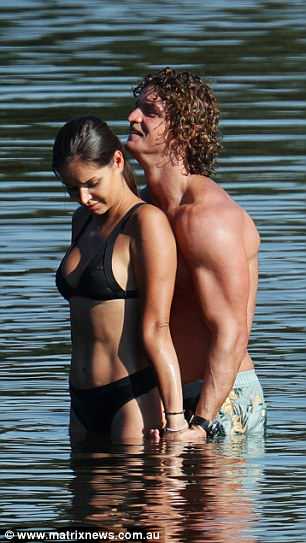 Going swimmingly: The pair seemed to get along well as they got up close and personal while partially submerged in the river 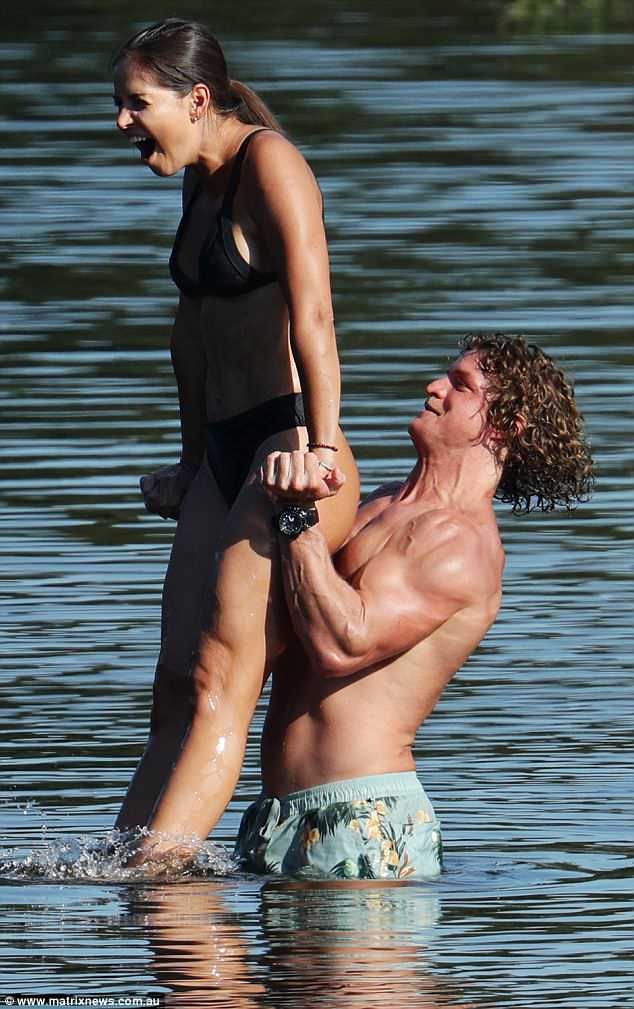 Copping an eyeful: At one point, the scantily clad woman’s derrière veered perilously close to Nick’s face as the duo grappled with a difficult dance attempt 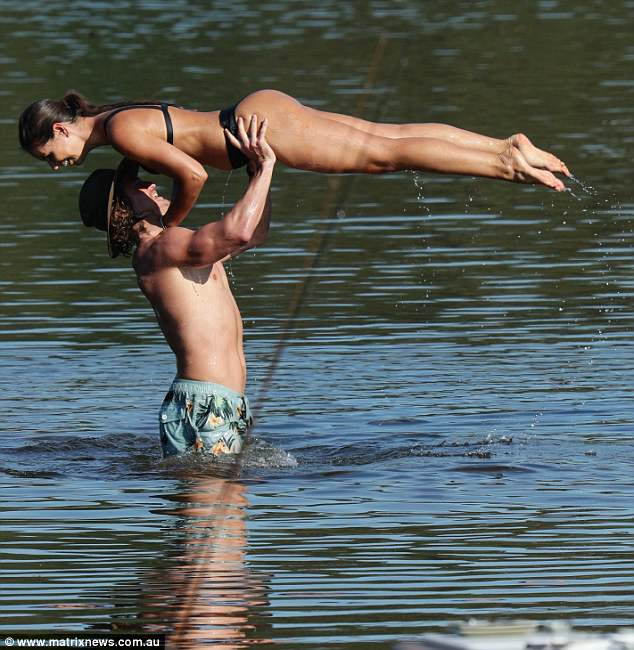 Nobody puts baby in the corner! During the date, the duo attempted to recreate the iconic Dirty Dancing lift 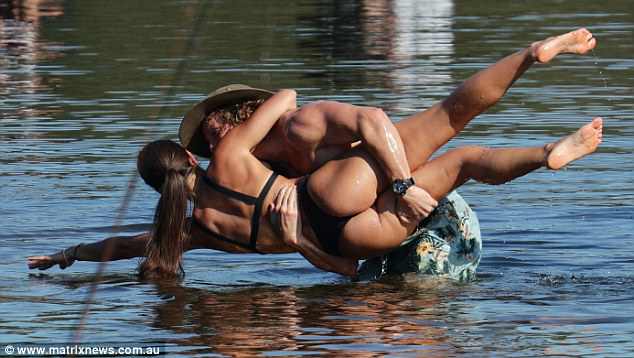 Putting those muscles to good use! Nick kept a strong hold of the brunette beauty

The ladies will be impressed! A shirtless Nick proved why The Bachelor women will be flocking to him while on the show

After the young lady collapsed into Nick’s arms, the pair exuded sexual chemistry as they moved in for a kiss.

Meanwhile, back on shore, Nick acted like the total gentleman.

He offered his date a black-and-white striped towel to cover up and keep warm after their dip in the river. 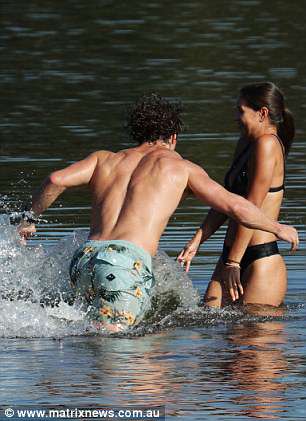 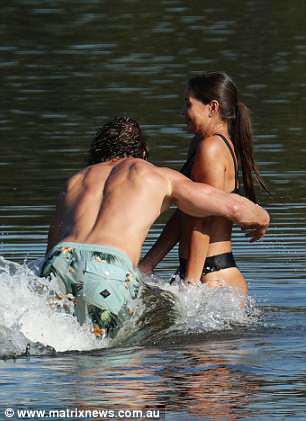 Mucking around: The pair put on a playful display during what looked to be a fun date 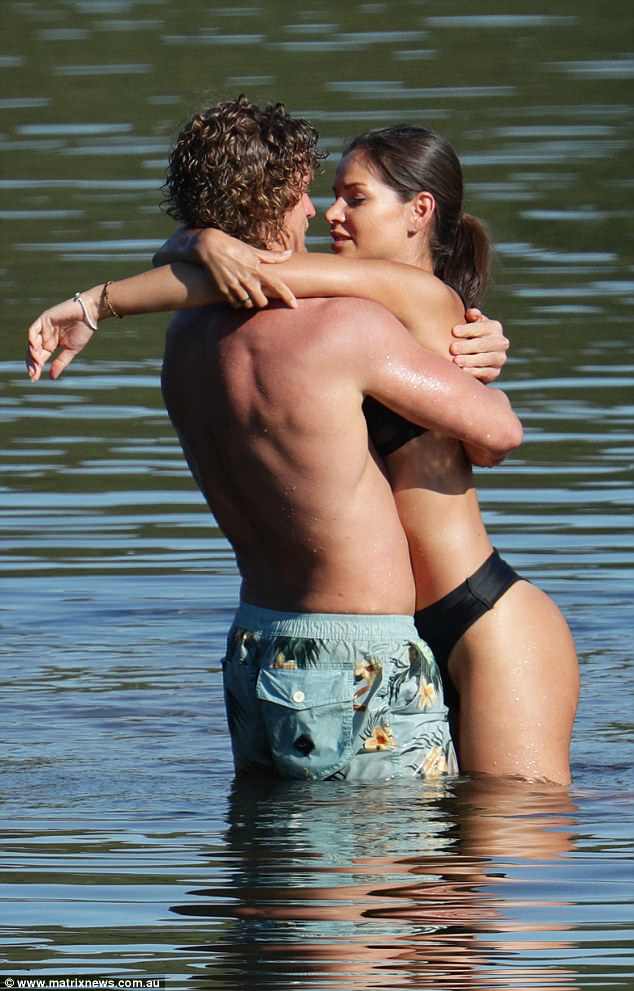 Pucker up! Other images show the pair wrapped in a steamy embrace in the river, looking very close to locking lips as their faces are within inches of touching each other 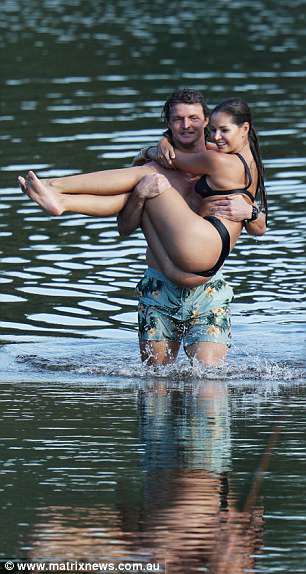 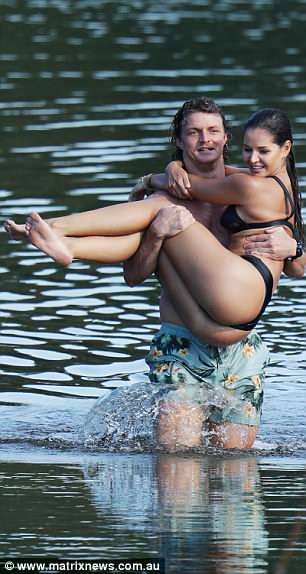 Could this be love? Nick held the brunette in his arms as he navigated the waters

It comes after reports emerged that the sports star may have been forced to re-film certain scenes on the Channel Ten reality show for not being affectionate enough.

At a previous paddle boarding date, Nick reportedly failed to impress when he didn’t kiss his date, despite the two of them getting along well.

‘It looked as if the producers wanted him to turn on the fireworks and passionately kiss the girl but he didn’t,’ a source told Sydney Morning Herald’s The Goss on Sunday.

‘So they kept making him go in and out of the water where the rose was placed in a canister in the hopes that he might have a better reaction.’ 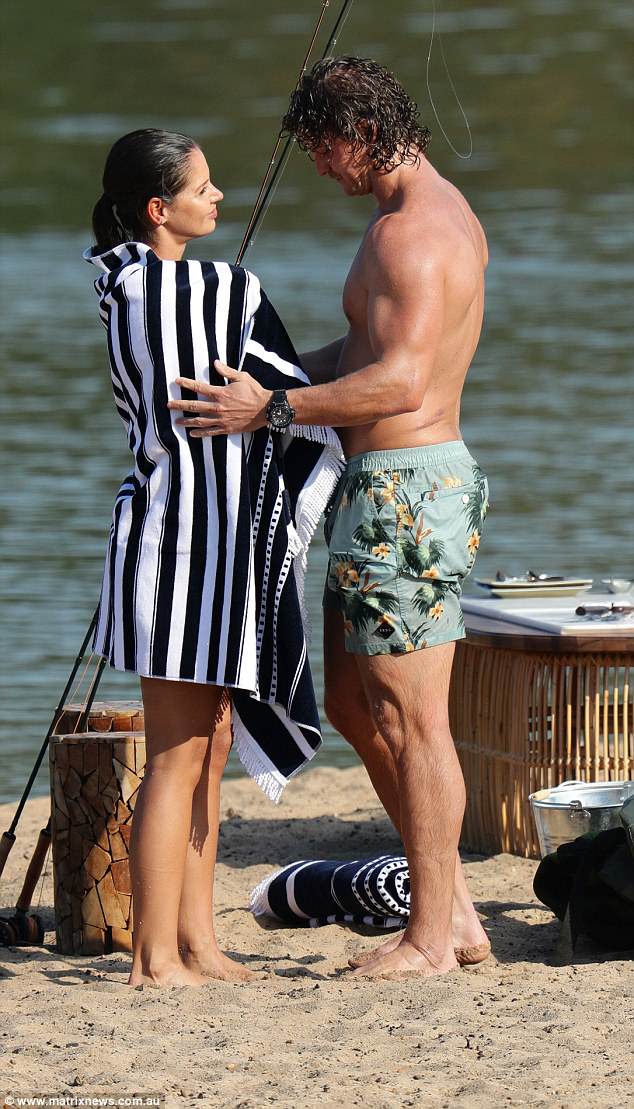 What a gentleman! The Honey Badger helped the soaked stunner cover up by handing her a black and white striped towel 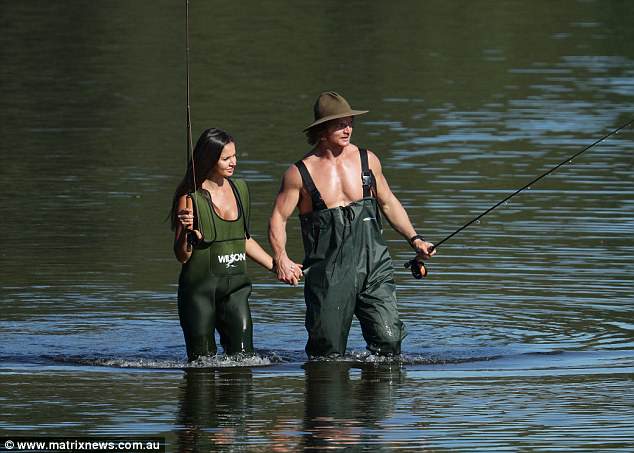 Endless activities: The two soon-to-be reality stars also seemed to indulge in a spot of fishing as they got to know one another better