The Batman: Robert Pattinson is seen on set for FIRST time as he shoots funeral scene in Liverpool

Robert Pattinson was seen on the set of his upcoming movie The Batman for the first time on Wednesday morning, as he arrived at Liverpool’s St George’s Hall to shoot a funeral scene.

Cutting a dapper figure in a black suit, the 34-year-old screen star covered up in a smart woollen coat as he stepped out of a chauffeur-driven car ahead of filming the scenes at the venue, which is doubling for Gotham Hall.

With his raven locks slightly obscuring his famous features, the actor stood under the protection of a large black Slazenger branded umbrella as a downpour swept over the city.

Star: Robert Pattinson was seen on the set of his upcoming movie The Batman for the first time on Wednesday morning, as he arrived at Liverpool’s St George’s Hall to shoot a funeral scene

Ahead of the actor’s arrival on the rain-soaked set, hundreds of extras were seen gathering at the venue. Gotham Police cars seen parked outside the venue as extras filed in by the dozen while cameras rolled.

Uniformly clad in black, castmembers were seen carrying wreaths and various other floral arrangements as they gathered for the service. Putting safety first, they wore face masks in between shooting scenes.

Also on site appeared to be a vintage version of the iconic Batmobile, which was parked at the steps of the imposing building, and guarded by a security team, also wearing black. 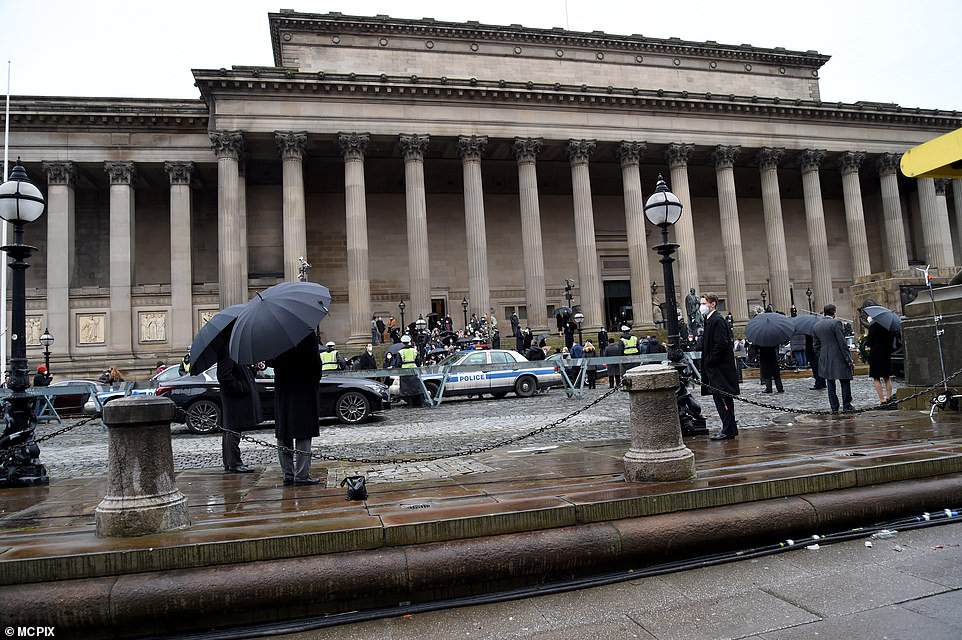 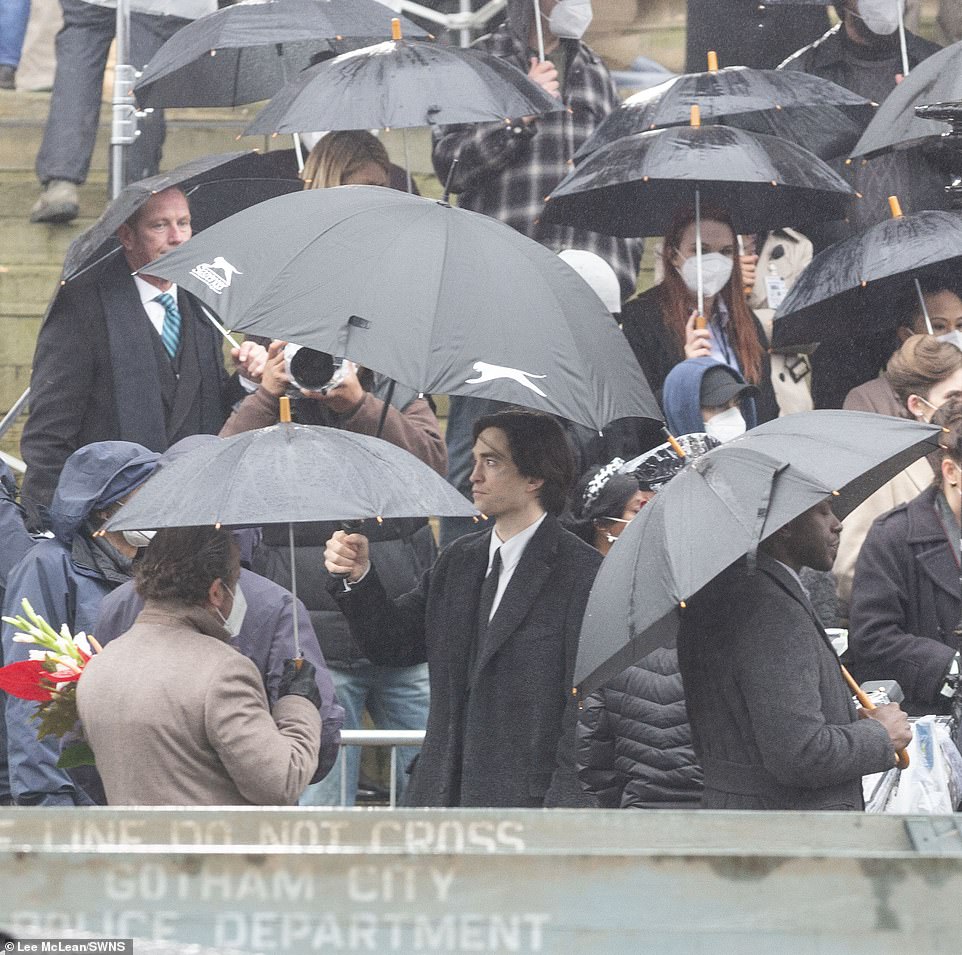 It was revealed on Wednesday that filming had started on the highly anticipated film, after the cinema release date was delayed until 2022 due to fears over the novel coronavirus pandemic.

A vintage cream and red car with a wedding ribbon tied across the bonnet was parked outside the historical building, possibly teasing a romance for Batman – played by newcomer Robert Pattinson – in the film.

The building was cordoned off with railings to stop the public getting too close to filming, as workmen set up the location before the cameras rolled again.

None of the cast, including Robert, were seen on set but it is likely that they will be filming in the area in the coming days.

Dozens of vans could be seen parked outside the hall as member of the crew lifted plastic-covered items into the building – including what appeared to be a security body scanner.

Filming for the £100million movie is expected to last around a week with roughly 100 actors and crew sticking to strict quarantining rules. 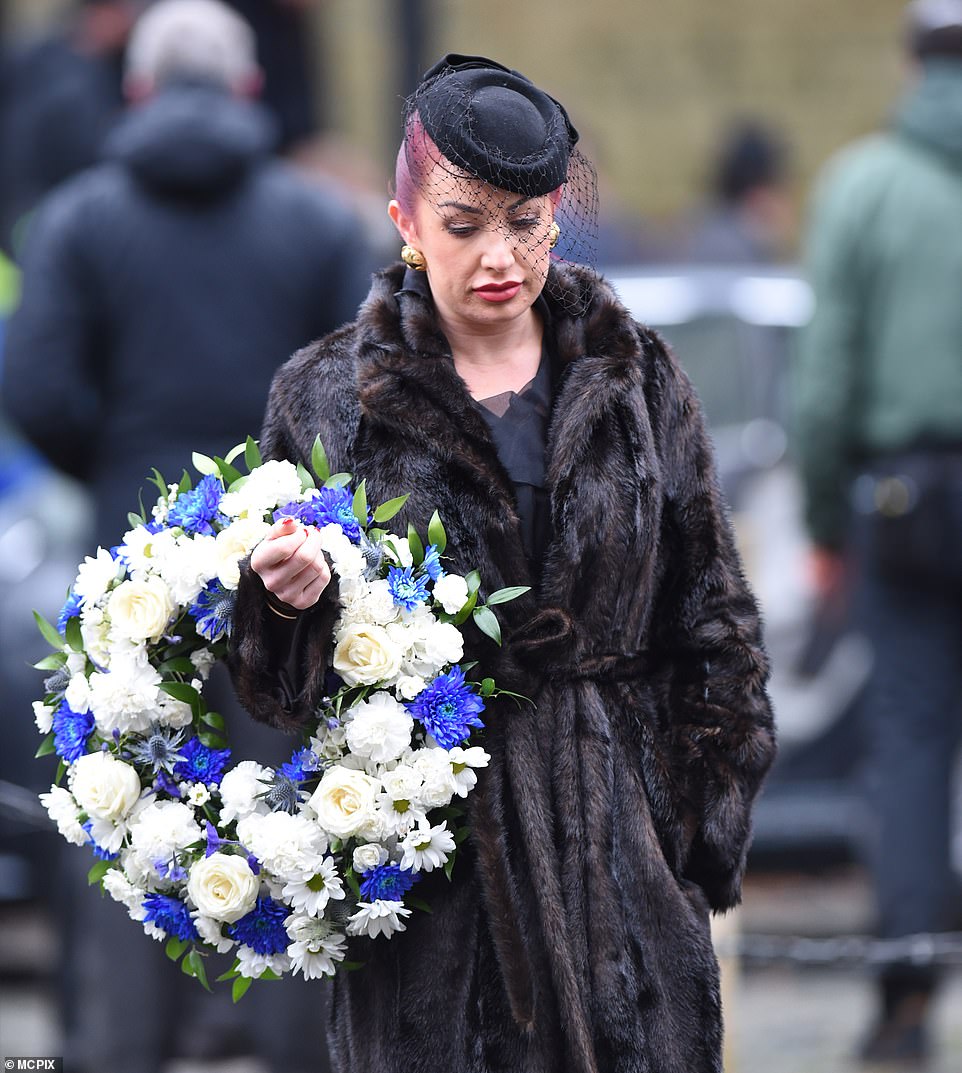 Before relocating to Liverpool to shoot for the blockbuster, production workers were working in the relatively low risk COVID-19 area of Leavesden in Hertfordshire.

One insider told MailOnline: ‘Quite a few of us are surprised to say the least that around 100 people based in a film studio in Hertfordshire are being asked to go to a high risk area in the North West.

‘However to be fair to the production company they do test for coronavirus.

‘We have been told it is strictly work, eat and sleep. We even have to eat meals alone in our hotels rooms. Despite it being a Hollywood film, it is not exactly glamorous.’

On Wednesday, studio workers were seen erecting the set at St George’s Hall which will double as Gotham City Hall.

A sign which read ‘City Hall’ could be seen in the entrance to St George’s and an old fashioned red and white car was parked nearby.

However there was no sign of Twilight star Pattinson or the Batmobile. One worker said: ‘It’s just prep work at the moment. We certainly haven’t seen Robert Pattinson or anyone else yet but it will start very soon’

The Batman is the latest blockbuster to be delayed because of coronavirus, raising fresh doubts over the future of hundreds of UK cinemas.

On Monday, Warner Brothers said it would push back the release of the superhero epic, starring Twilight actor Robert Pattinson, from October 2021 until spring 2022. 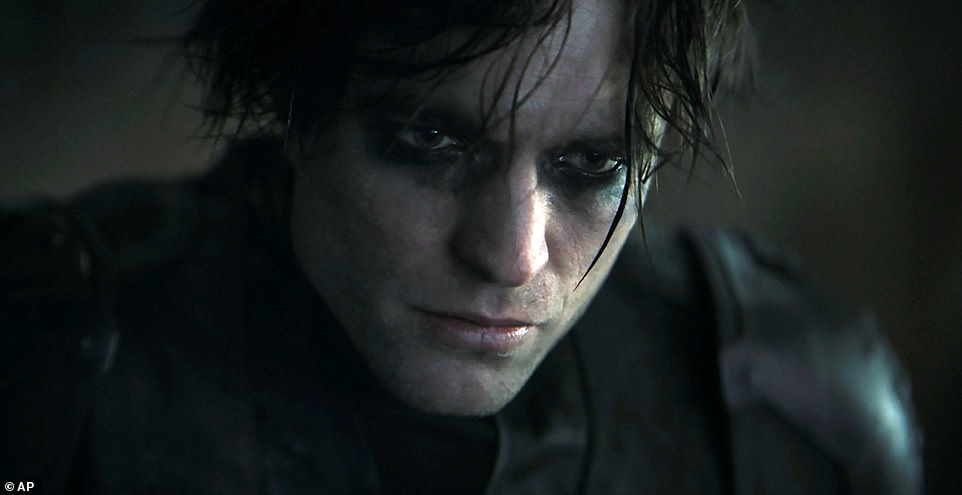 Cast: Robert and the rest of the cast were absent from the filming location on Wednesday

It also revealed that sci-fi film Dune, has been postponed from December to October next year. Cinemas now face an existential threat from a drought of big releases.

On Monday Cineworld shut all its 128 UK cinemas, putting 5,500 jobs at risk, until the spring after the release of the latest James Bond movie, No Time to Die, was postponed.

Odeon has said it will only open 30 of 120 sites at weekends. Social distancing coupled with people’s fears of catching the virus mean most viewers are staying at home.

The subdued response spooked executives and sparked a rash of postponements.

The Batman was forced to delay filming last month when its lead star contracted coronavirus, parts of which were due to be shot in the Liverpool location.

An insider told MailOnline: ‘Today is the first day the main production unit has returned to filming and there seem to be no other hiccups at the moment.’

While a Warner Bros. Pictures spokesperson confirmed: ‘Following a hiatus for COVID 19 quarantine precautions, filming has now resumed on The Batman in the U.K.’

The source added that a significant part of the film was supposed to be shot in Liverpool but due to coronavirus the shoot had been cancelled and re-arranged several times, shifting the completion date for the project back even further.

Liverpool will play an important role in The Batman as American filmmaker Matt Reeves, who is directing the upcoming superhero film, revealed recently at DC FanDome, a virtual convention held by DC Comics and Warner Bros.

During an interview, he confirmed Liverpool would be the backbone for Gotham City as they shoot the remaining 75 per cent of the film.

In September, MailOnline revealed that production crew were ‘working round the clock’ to try and film scenes without Robert after he contracted Covid-19 and was forced to self-isolate for two weeks.

The Hollywood actor, who was understood to have turned up on set with a temperature, had to stay away from filming for 14 days while he recovered.

It came amid fears that halting production could cost as much as £5 million with the film’s director Reeves trying to film as much as he could at the Warner Bros. Studio in Leavesden, Hertfordshire, without the leading man.

Any of the 130-strong crew who did not have direct contact with Pattinson were asked to return to work and sets that had been prepared were moved from studio G to another studio.

‘Anything that can be shot and does not involved Pattinson will now go ahead,’ a set insider told MailOnline at the time.

‘That includes scenes with his body double. The aim is to get as much done as possible before he returns and the hope is that none of the other actors get the virus.

‘Crew can be replaced as most are freelance and hired for the duration of the shoot but it would be disastrous if another major actor gets the virus.

‘Production staff are working round the clock to get things moving and allow some filming to take place.’

MailOnline revealed how The Batman was thrown into chaos after Pattinson tested positive for COVID-19.

He had arrived at the studio and told the on-set nurse he had an ‘elevated temperature.’

A subsequent electronic temperature test meant he was sent home and told to undergo a test for the virus.