These photographs are a tonic for troubled times.

They’re MailOnline Travel’s pick of the 50 images shortlisted in a contest called #Spring2020, run by photo app Agora. It asked photographers around the world to send in their best shots of the season that breathes new life into the world.

In total 14,596 photos were submitted from snappers across the globe, with judges whittling them down to 50 finalists. After that, it was all down to Agora users, who were tasked with selecting the overall winner.

The magical entries in the final reckoning include mesmerising pictures of blooming flowers in Vietnam, a chick being fed by a dedicated parent in Bangladesh and a dreamy Tuscan landscape.

Octavi Royo, Agora’s CEO & co-founder, said: ‘Spring is the symbol of life and rebirth in all civilisations, a time when seeds come to life and flood our beloved Earth with colours. Through Agora, we get the opportunity to discover the best images of this wonderful period of the year.’

He added: ‘Enjoy the show!’ And to do that, just scroll down… you’ll find the winning image at the bottom. 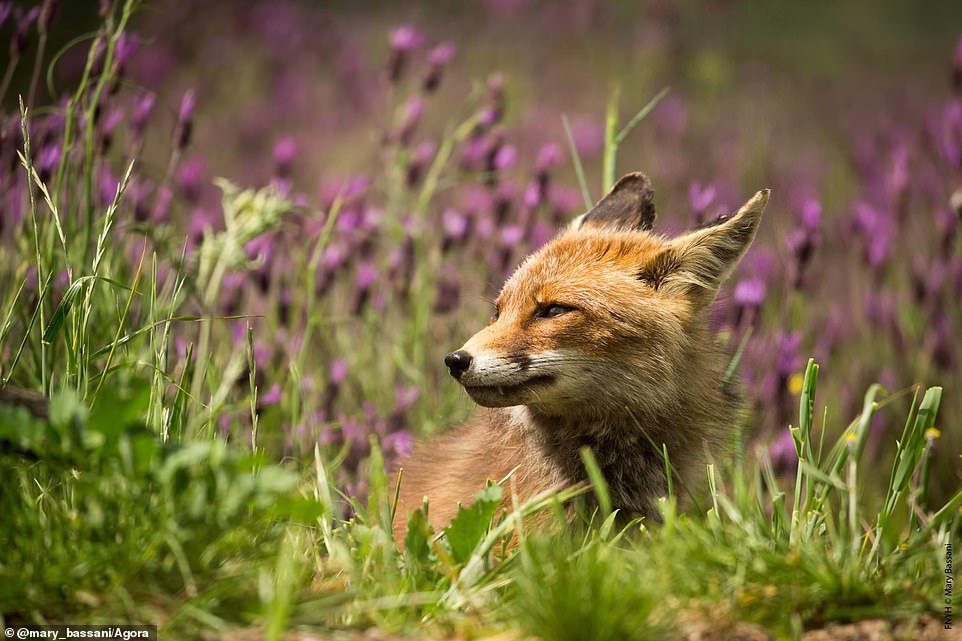 This striking red fox was captured on camera by Italian photographer Mary Bassani in Castilla y León, Spain. She said: ‘I was photographing blue magpies and suddenly this beautiful red fox appeared from the bushes. The fox is one of my favourite animals and I never imagined seeing it in these circumstances, surrounded by lavender flowers. It was an exciting day!’ 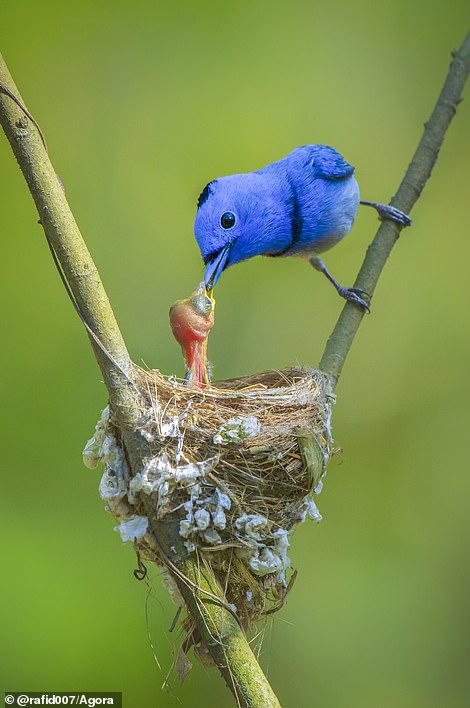 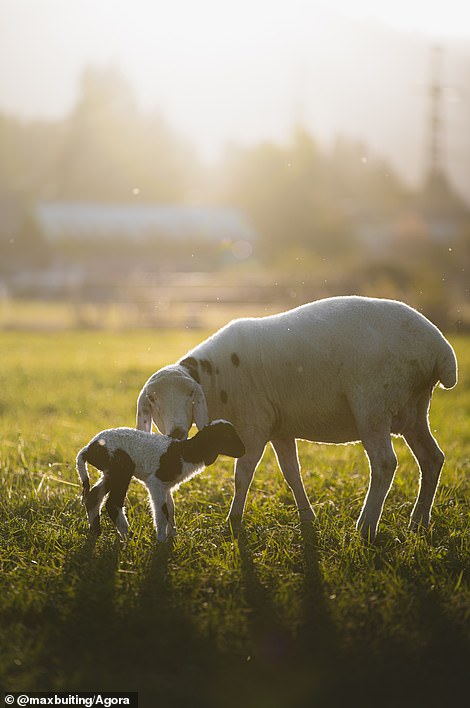 The heartwarming scene on the left was captured by Bangladeshi photographer Rafid Yasar in his home country. He said: ‘The black-naped monarch is a small bird that lives throughout tropical Southeast Asia. During spring, the female lays three eggs in a small cup-shaped nest up in a tree. In the photo, you can see the male bird feeding its newborn chick. Unfortunately, it’s the only hatchling that remained alive in the nest, as it has been previously destroyed by a bunch of local kids who stole the two other eggs’. Dutch photographer Max Buiting took the sweet image on the right of a newborn lamb in the Netherlands 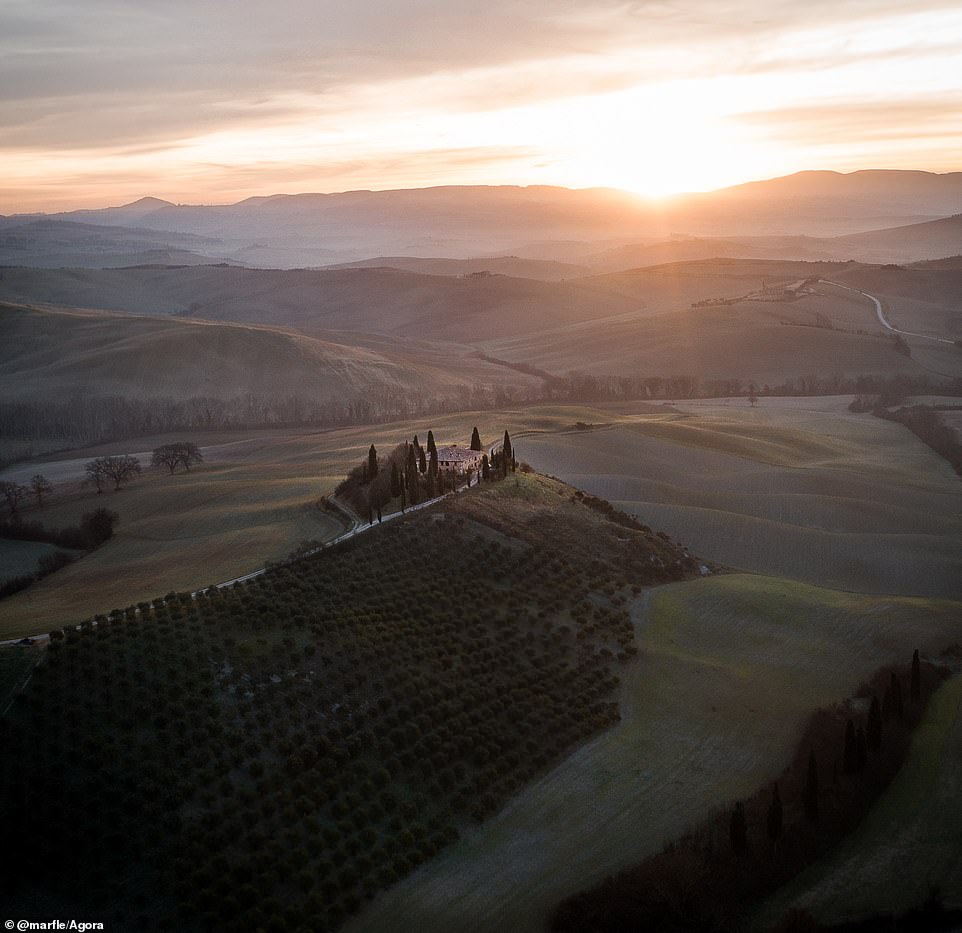 German photographer Marian Flessa took this jaw-dropping image of Italy’s Tuscan landscape. He explained: ‘On this particular morning, we went to a spot renowned for its great view over the valley. Because of the popularity of the place, it was impossible for me to get a good view without a telephoto zoom lens, so I flew my drone. The final result seems so quiet – just a new peaceful day starting in Italy’ 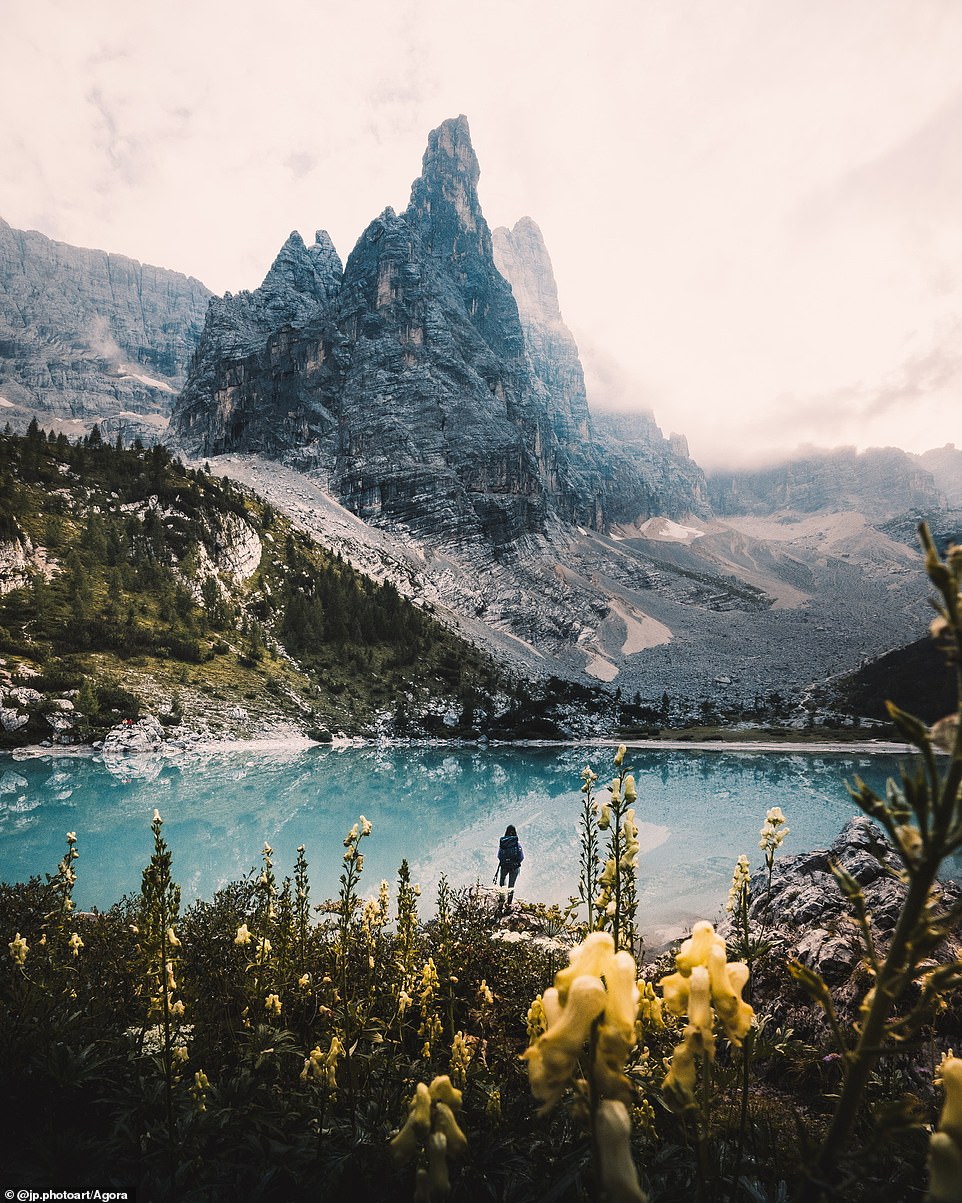 This incredible scene at Lake Sorapis in Italy was captured by German snapper Jörg Petermann. He called the image ‘Flower Bloom’ 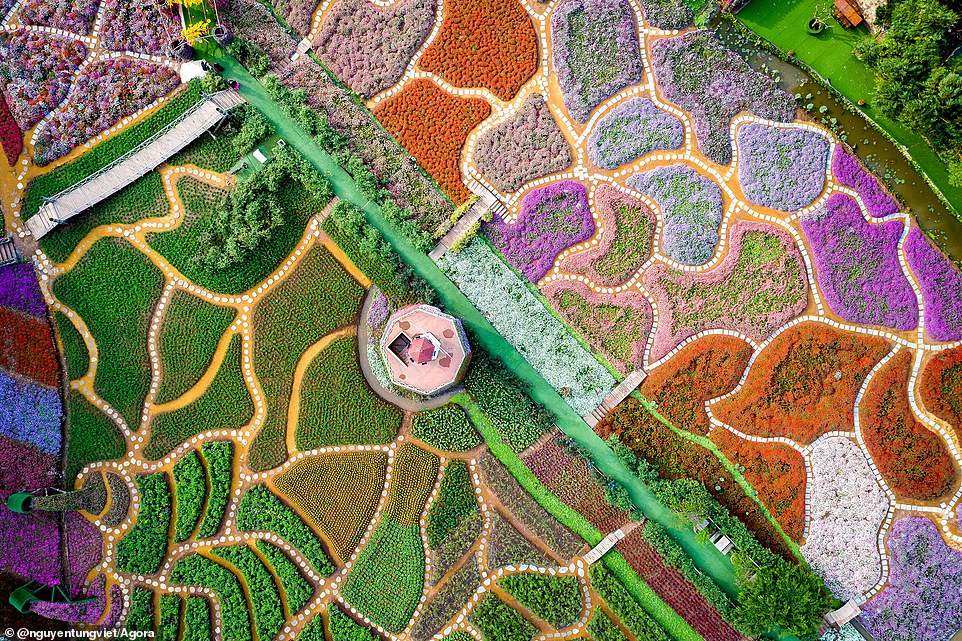 Vietnamese snapper Nguyen Tung Viet took this colourful shot in the Ho Tay flower valley in Hanoi. He said: ‘When you step into this place, you step in a bubble of peace and quiet away from busy and noisy Hanoi. In this vast flower garden, there are thousands of flowers displaying their beauty, thousands of colours are opening before your eyes’ 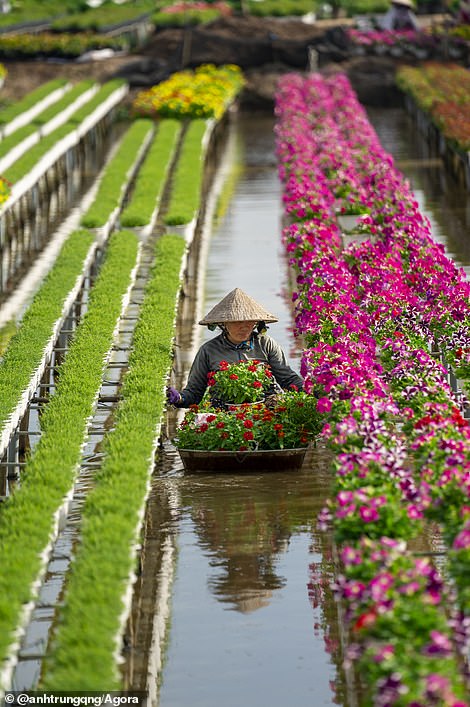 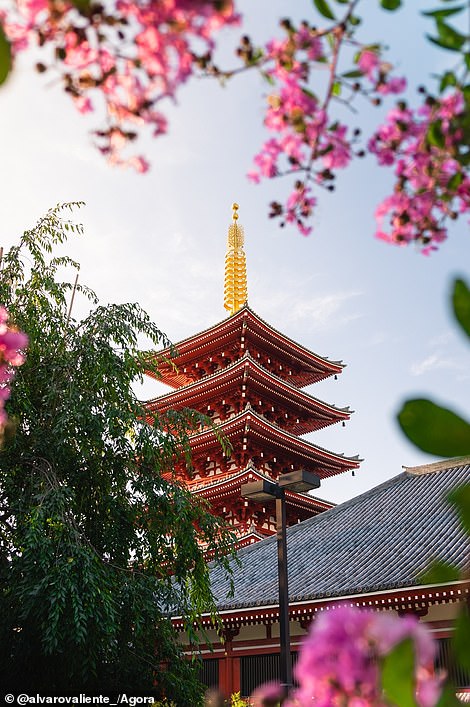 The image on the left shows the captivating Sa Dec flower village in Vietnam and was taken by local Luong Nguyen Anh Trung. He said: ‘Sa Dec flower village provides a large number of trees and flowers to the southern Vietnamese regions, especially during the Vietnamese Lunar New Year or Tet Festival. Unlike normal plantations, flowers in Sa Dec are grown on high pergolas and water from nearby canals.’ Spanish photographer Alvaro Valiente took the stunning photo on the right of the Senso-Ji shrine in Tokyo. He said: ‘Waking up at 4am was worth it to capture this beautiful, soft light. The place is normally crowded with tourists, but we had it to ourselves for a short time. The vibe you get from this place is absolutely magical. I can’t wait to go back to Japan again! I left part of my heart there’ 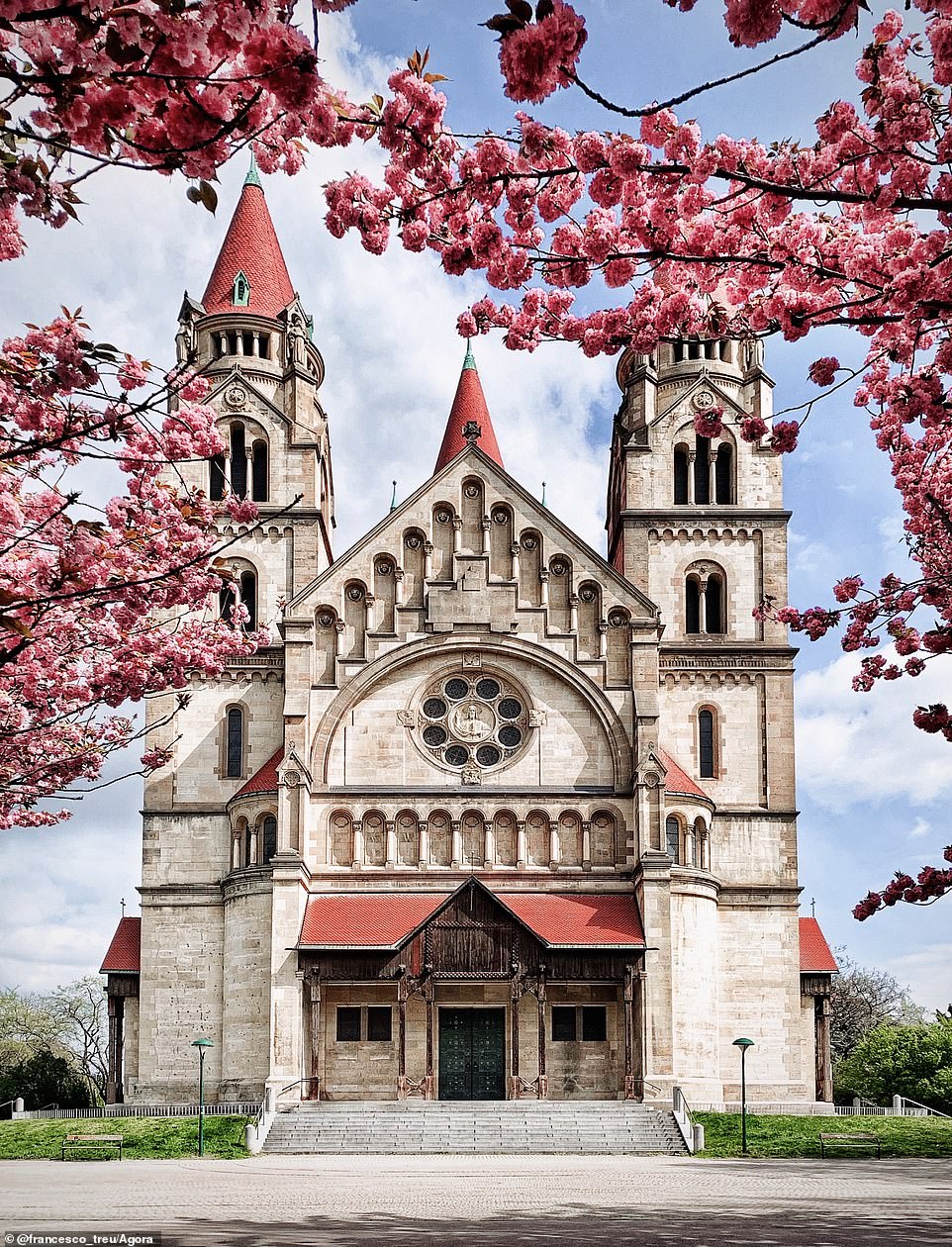 Francesco Treu from Italy captured the St Francis of Assisi Church in Vienna, Austria, in this beautiful shot. He said: ‘It was incredibly windy on this day and it wasn’t easy to get the framing right, as the blossoms went in and out of focus constantly. I wanted to combine the softness of the blossoms with the imposing structure behind them, creating a strong yet beautiful contrast between nature and architecture’ 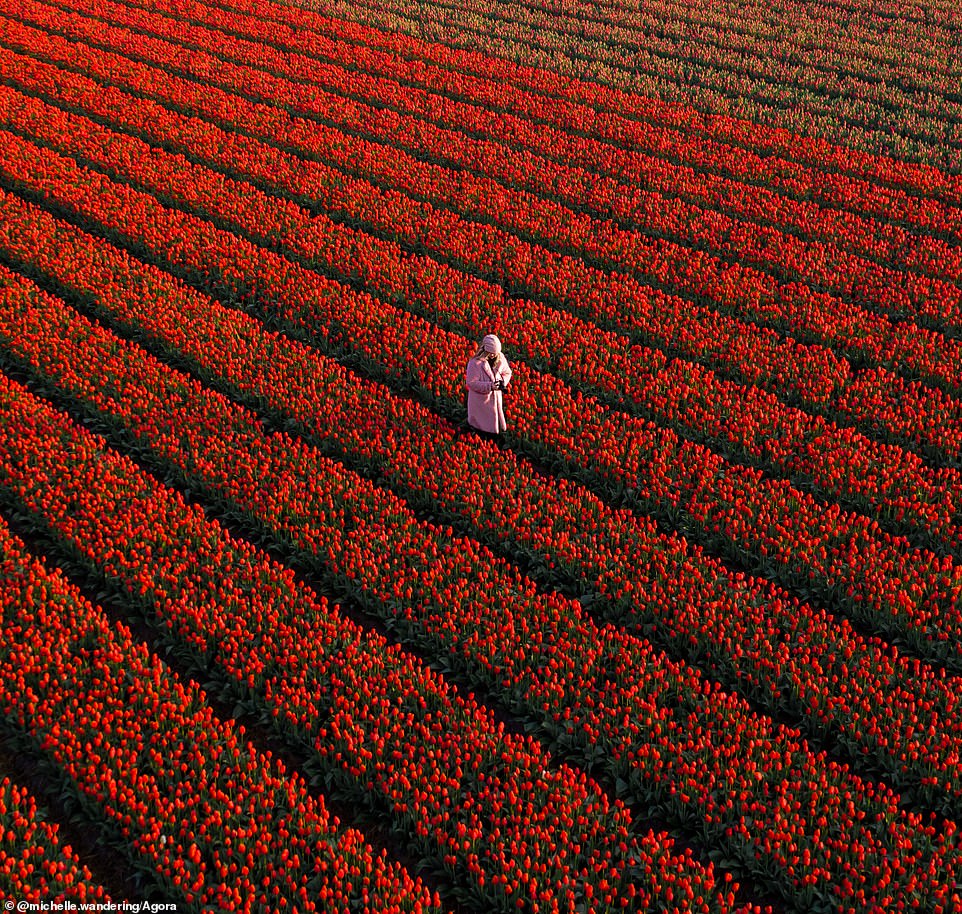 Michelle Loois got up at 5am with her partner and mother to capture this beautiful tulip field in Noordwijkerhout in the Netherlands. She called it ‘I took my mom on a sunrise mission’. She explained that the tulips are the first sign of spring in Holland and that her mother was ‘pleased to model’. She added: ‘The happiness she radiated is something I will never forget’ 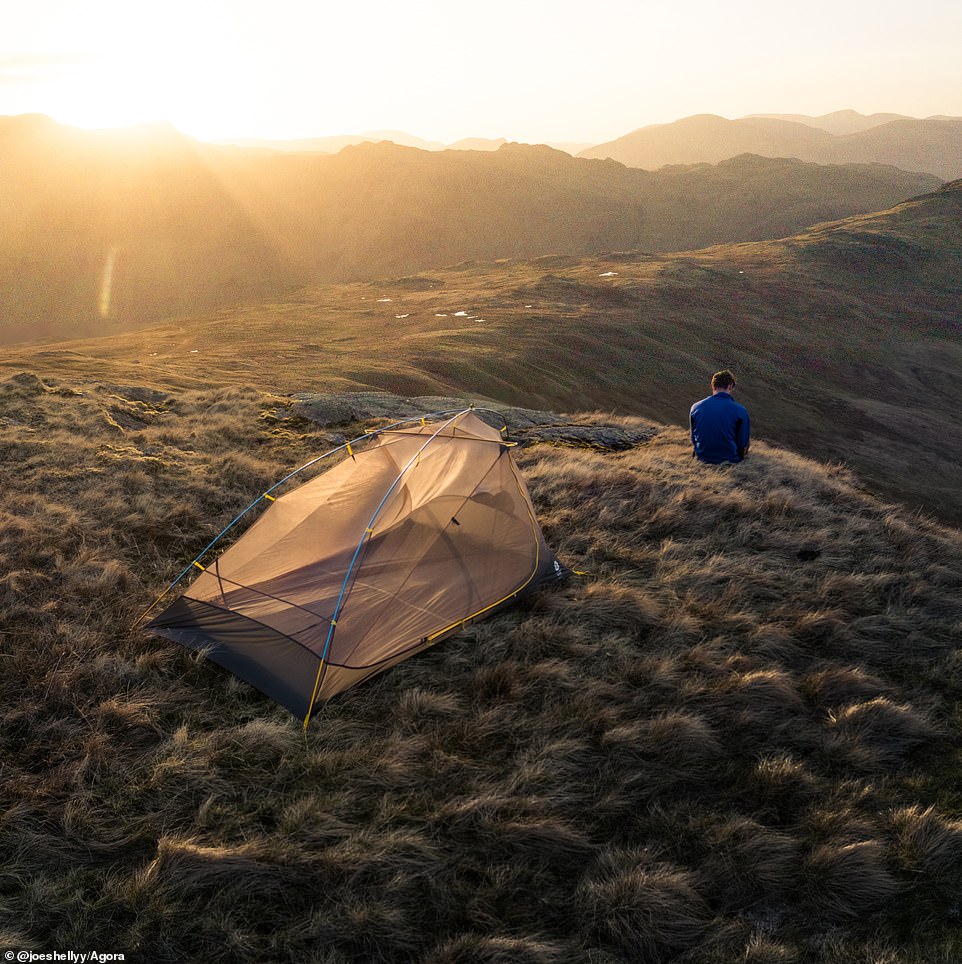 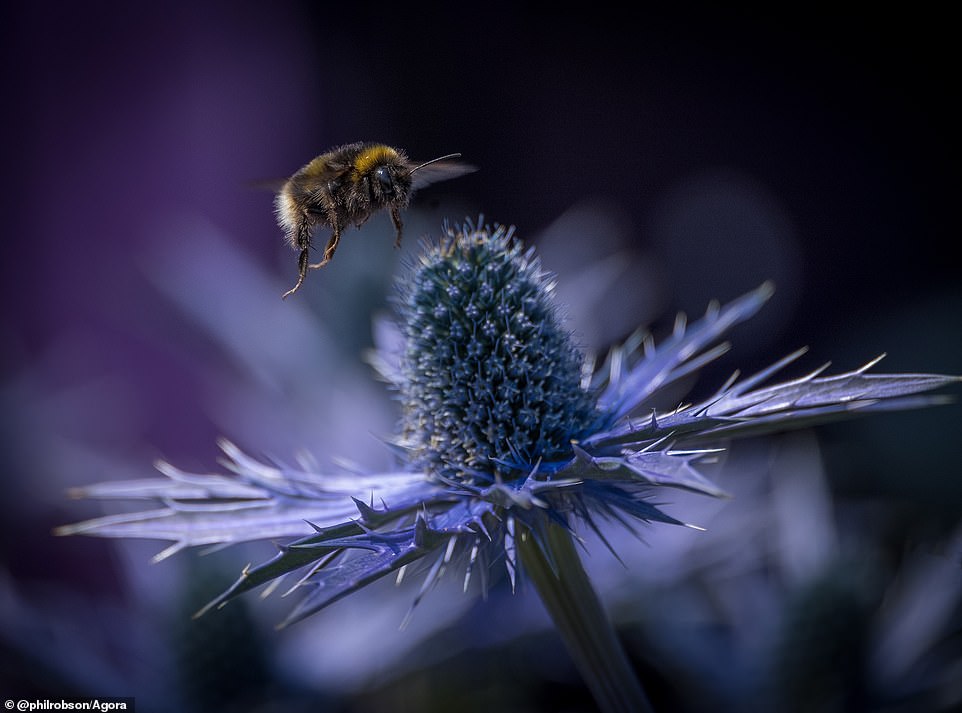 British photographer Phil Robson snapped this extreme close-up of a bee in Newcastle. He said: ‘Bees move erratically all the time, taking such a neat picture wasn’t easy’ 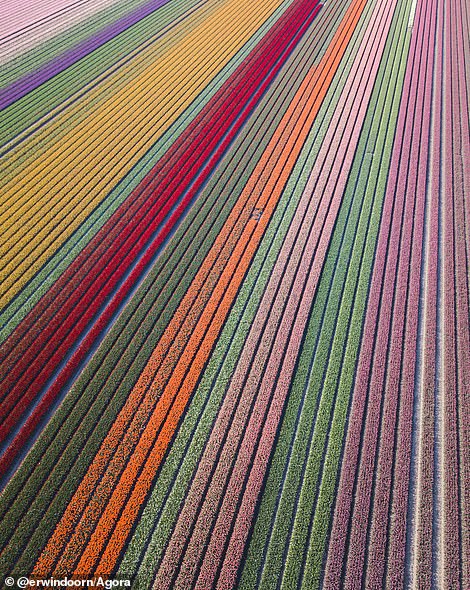 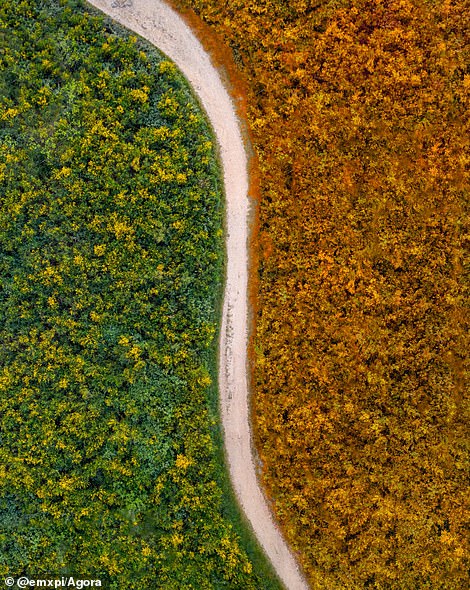 On the left is an incredibly colourful shot of the dazzling tulip fields of Noordoostpolder in the Netherlands. It’s the work of Dutch photographer Erwin Doorn, who said: ‘The blooming tulip fields make every spring special in the Netherlands. Seeing them from above makes it even more special!’ The image on the right is a composite of two shots taken in the same place in France’s Loire-Atlantique region. French photographer Maxime Pontoire explained: ‘Six months had passed between the two shots taken at the same location. I stitched together springtime (left) and autumn (right). I wanted to share the different colours announcing the seasons when nature turns orange and comes back to life again with beautiful flowers and lavish green grass’ 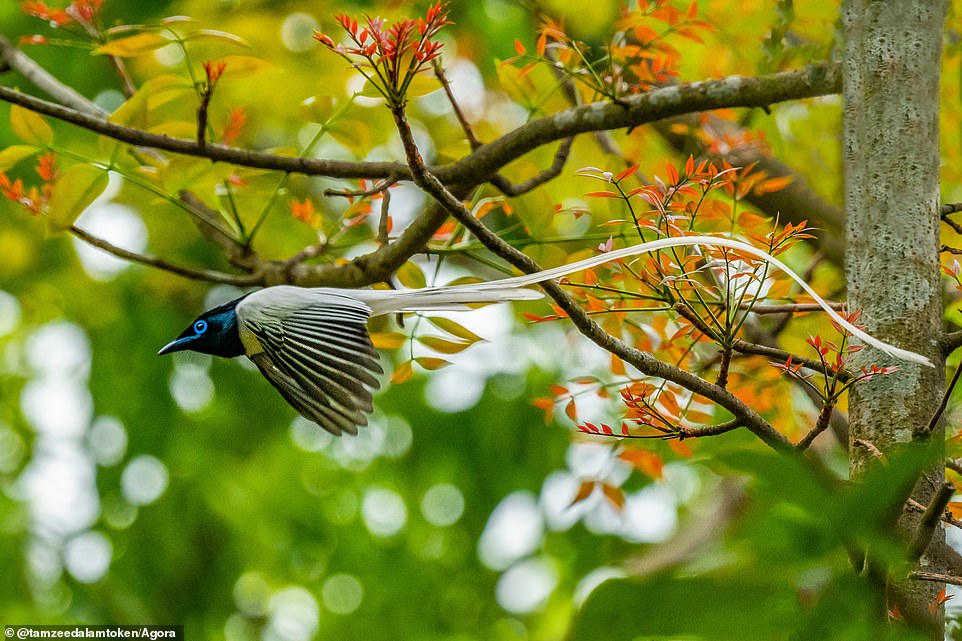 Bangladeshi Tamzeed Alam Token took this jaw-dropping image of a bird in Rajshahi, Bangladesh. He said: ‘I went out to take a picture of this Indian paradise flycatcher in the scorching heat that morning, and it only appeared around noon. After running after it for a while, I was able to take some good pictures’ 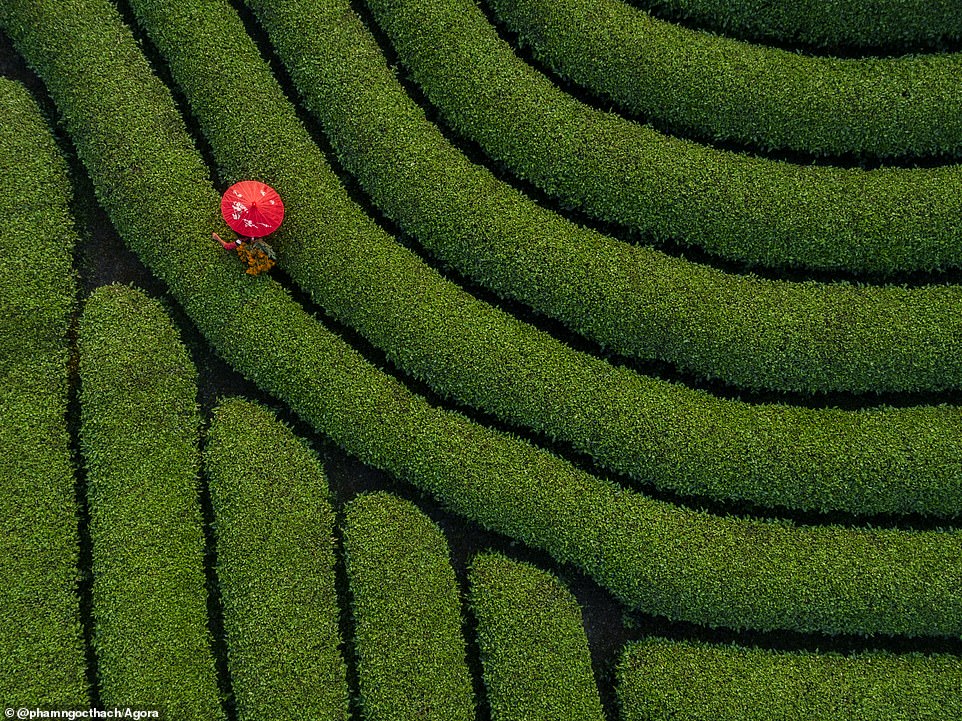 Pham Ngoc Thach is behind this mesmerising shot of Moc Chau tea hill in Vietnam, for which he deployed a drone. He said: ‘While flying my drone above the tea plantations, I noticed a red dot running in the middle of the vibrant green alleys. Rather intrigued by that beautiful contrast, I decided to lower my drone to follow the red dot who happened to be a Hmong girl protecting herself from the sun with an umbrella’ 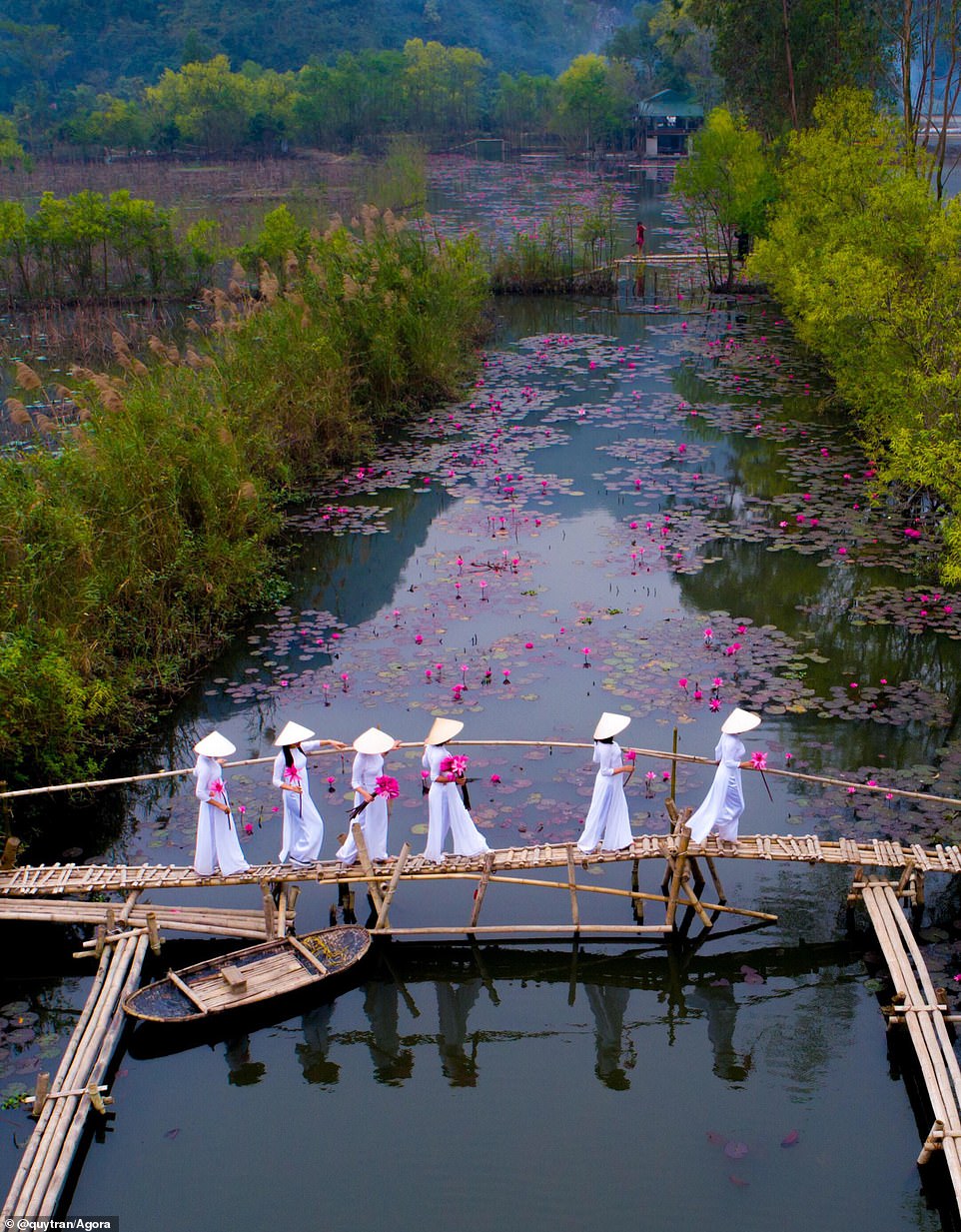 The overall winning image, by Vietnamese photographer Tran Quang Quy. It’s called ‘Water Lily Season’ and was taken at Yen Stream in Hanoi. He said: ‘With this photo, I wanted to show the beauty of Vietnamese culture to the world. This group of friends were all wearing an “Ao Dai”, Vietnam’s national garment. This outfit is inseparable from the image of Vietnamese women, both within Vietnam and beyond its borders, and especially at official ceremonies, conferences, and weddings. It is also one of the most popular uniforms for Vietnamese high school and university students. In this poetic setting with blooming flowers floating on the river, the authentic bamboo bridge symbolizes the connection between the past and the present.’ As well as earning the title of #Spring2020 Hero, Tran also scoops the $1,000 top prize