The best and worst of the fashion at the AACTAS 2023

Australia’s top film and television stars have stormed the red carpet at Sydney’s Hordern Pavillion for the tight-knit industry’s night of nights – the AACTAs – with many spending days, even weeks, crafting the perfect outfit.

And while many nailed it in form-fitting, glamorous get-ups, others rocked ‘fits that ensured eyes for on them for all the wrong reasons.

Matty Mills, Georgia May Davis and Suzan Mutesi, led the worst dressed list with their misguided take on the latest rising trends while Elsa Pataky, Aisha Dee and Sonia Kruger were flooded with praise on their daring choices that flattered their figures to perfection. 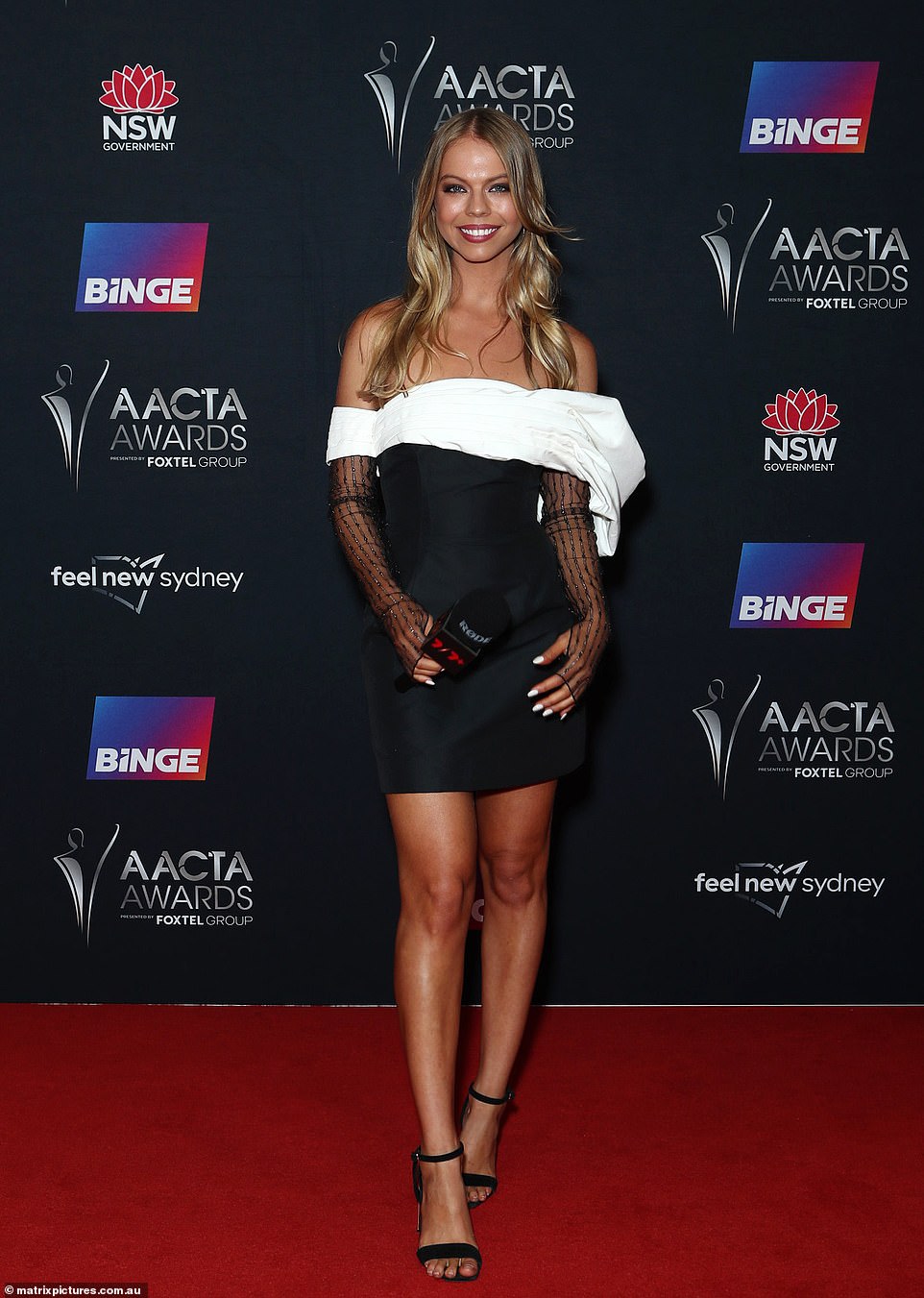 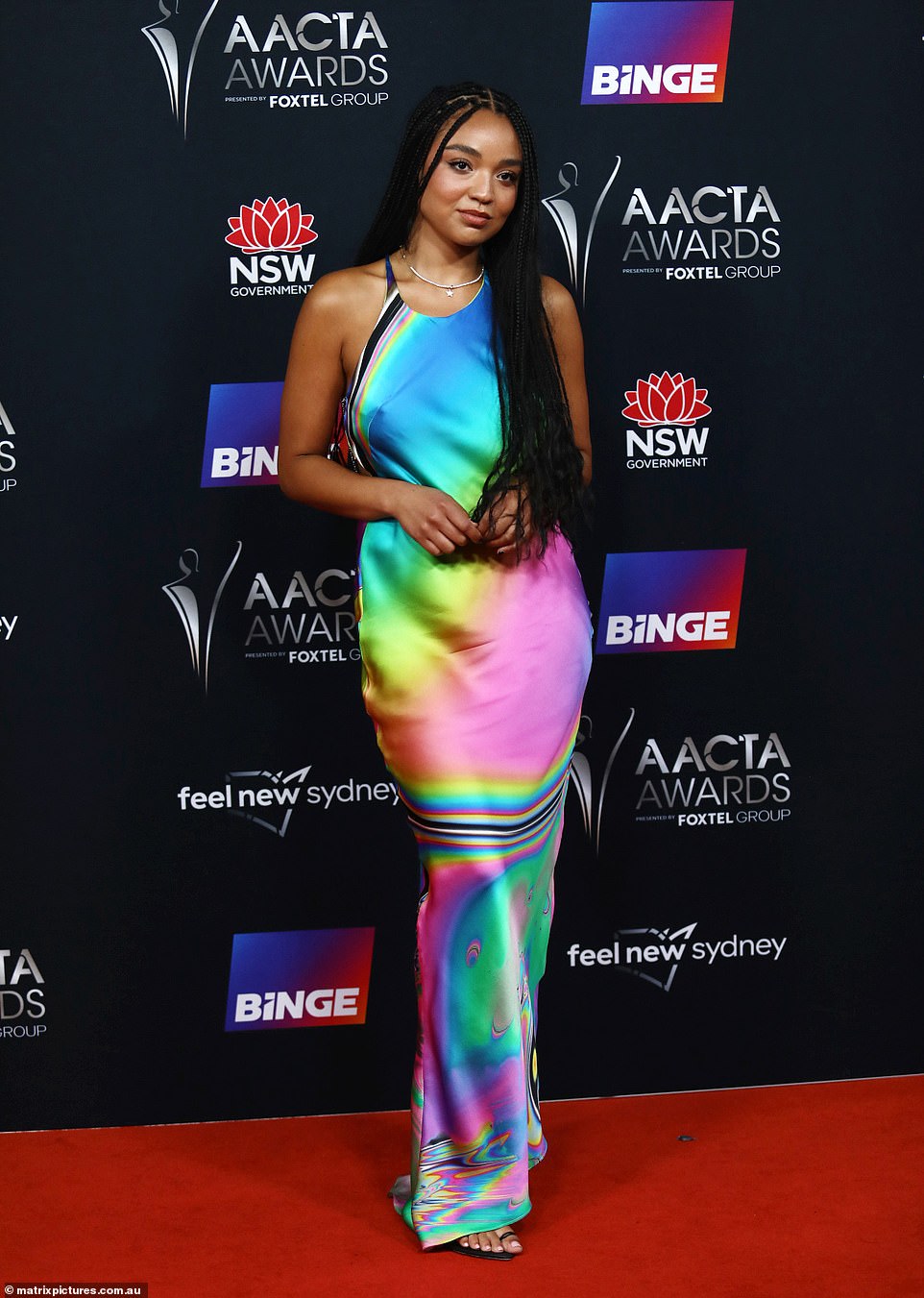 Actress Georgia May Davis was among the first to appear on the 2023 ‘worst dressed’ list.

The Dive Club actress wore a simple black and white off-the-shoulder cocktail dress. Unfortunately the bizarre fishnet sleeves through off the look and it looked unfinished.

The young actress was in good company on the worst dressed list, however, with television presenter Angela Bishop joining the ranks. 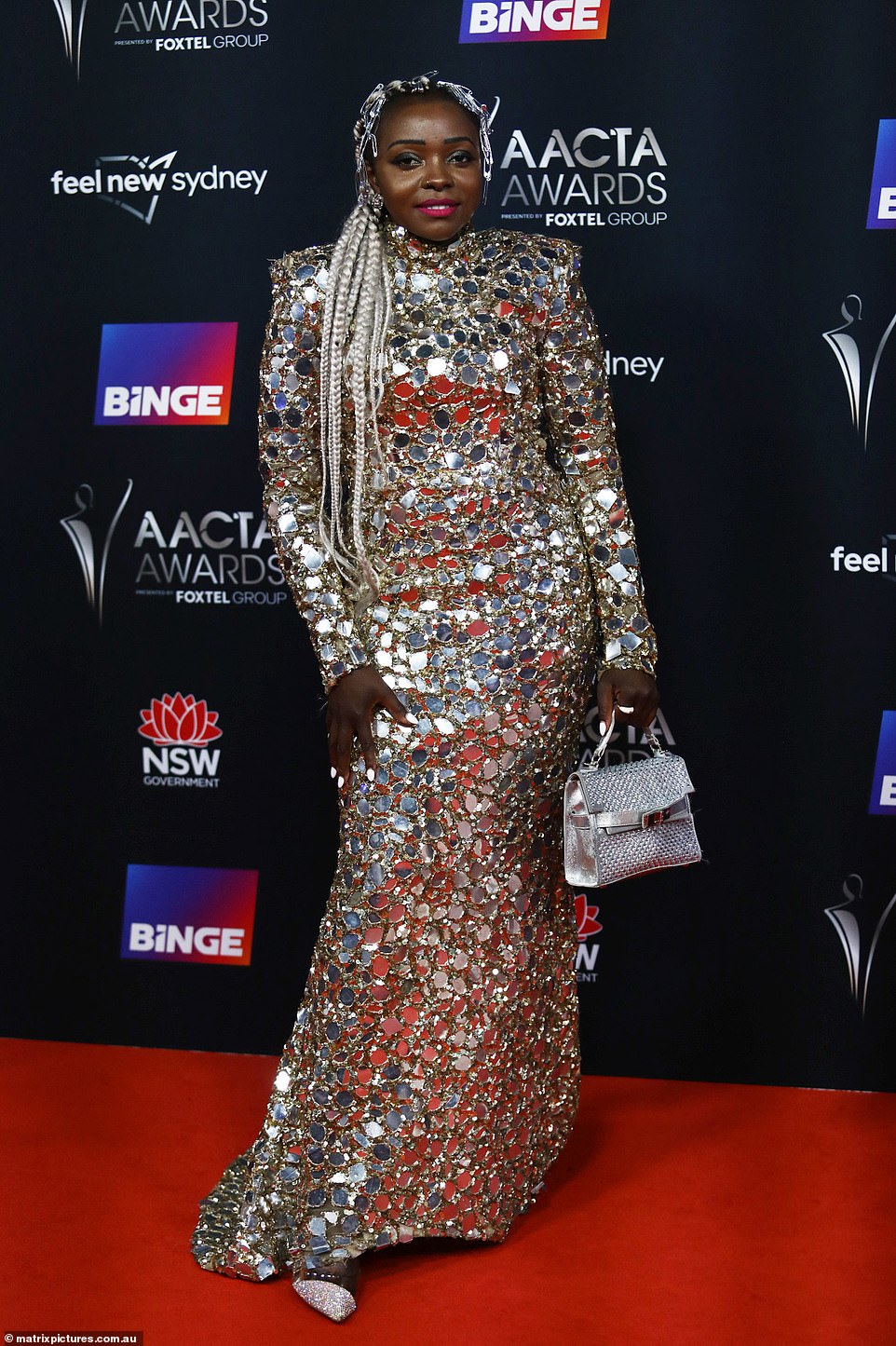 Suzan Mutesi looked like a human mirror ball in her gown, not quite pulling off the sequin gown trend 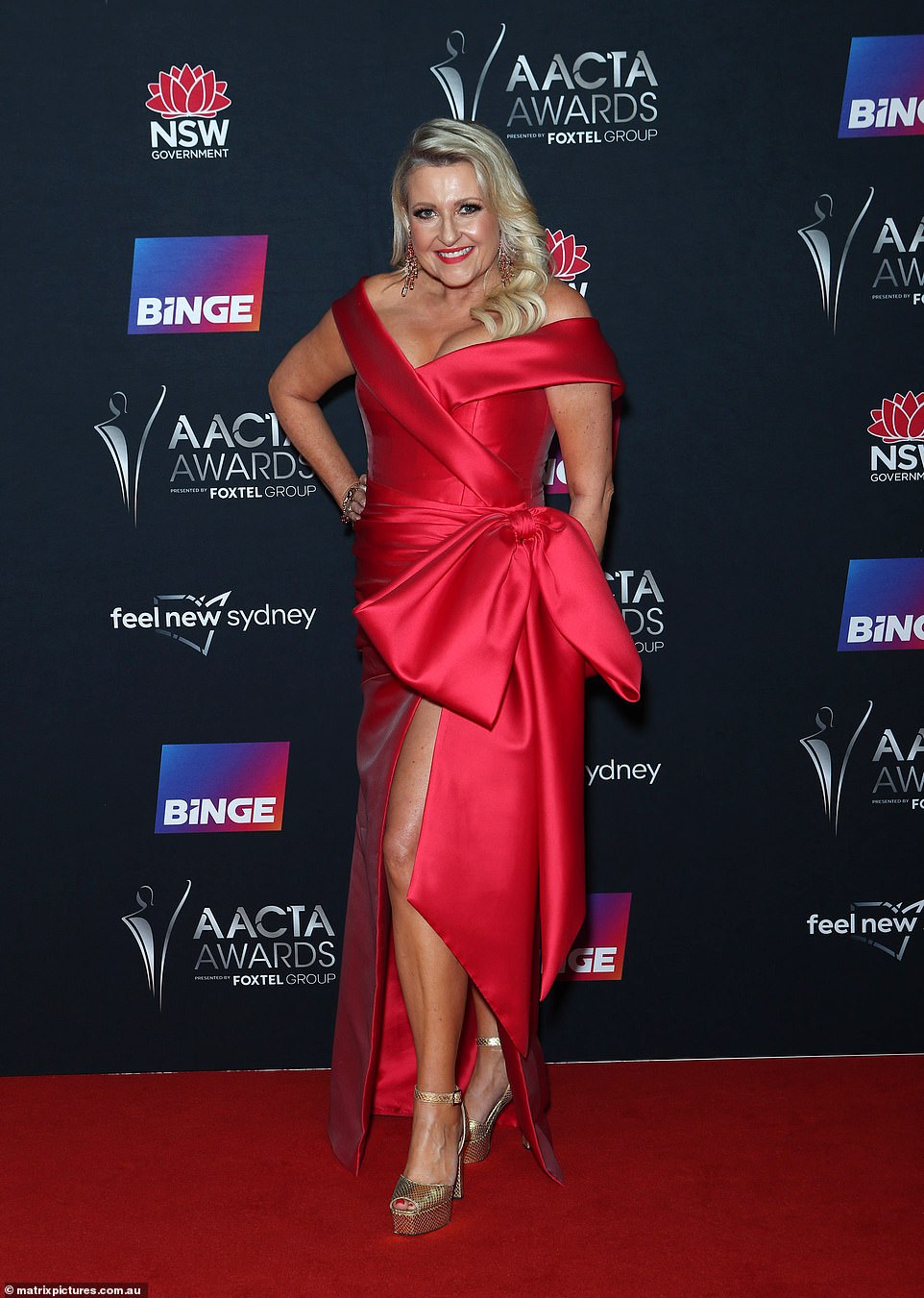 Suzan Mutesi, was the next to miss the mark at the event, looking like a human mirror ball in her long-sleeved, floor-length sequin ball gown.

The influencer and actress, recently made headlines when she was accused of ‘buying 100,000 followers’ on Instagram, but has told Daily Mail Australia the rumours are fake and being spread by trolls. 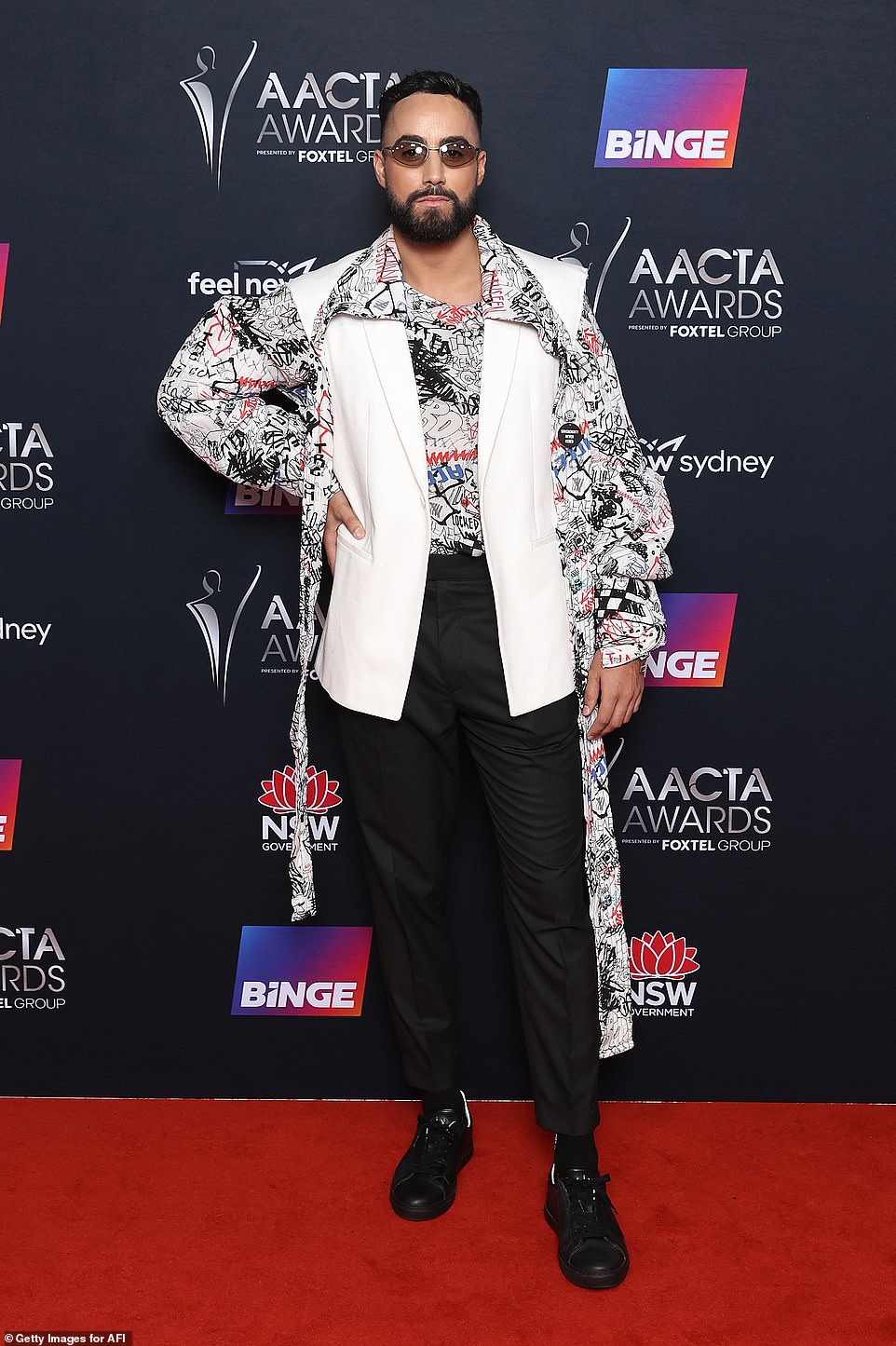 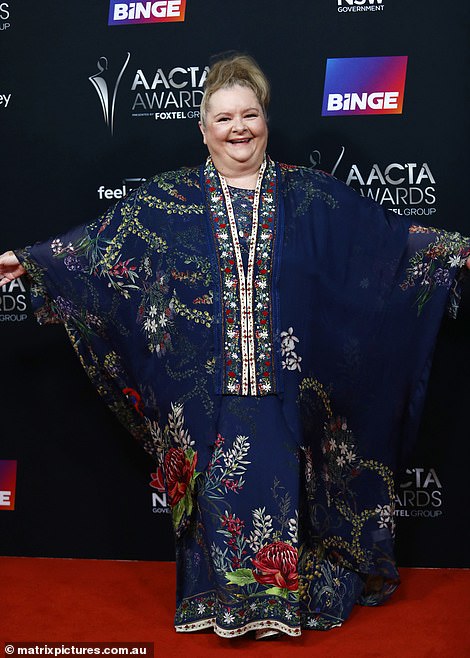 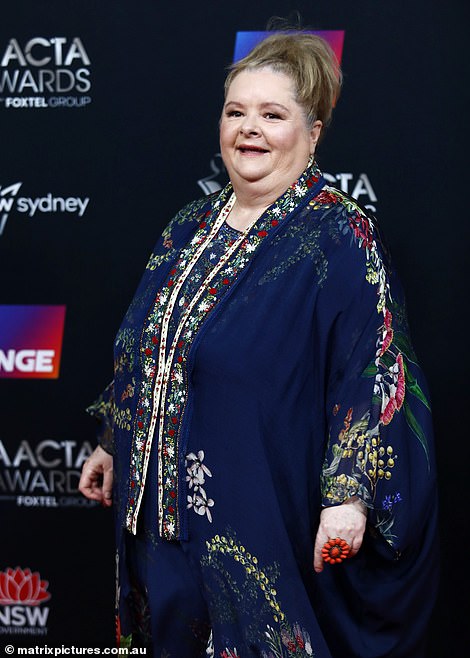 Matty Mills was the first man to earn his place on the worst dressed list after pairing a very loud party shirt with black suit pants and a large vest which looked out of place and appeared to swamp the popular entertainment reporter.

Emily De Margheriti didn’t manage to pull off the trend though and looked awkward in her three-piece suit which looked far too big on her petit frame.

The young Sissy actress also paired her outfit with mixed metals, a very cool trend, but didn’t manage the level of sophistication of Sonya Kruger or Jessica De Gouw.

Magda Szubanski didn’t quite nail the red carpet look in a camino-style gown which landed her toward the top of the worst dressed list on the night.

The derisive comic paired the outlandish dress with a statement orange ring and smiled broadly for the cameras.

Elsa Pataky arrived on the tail end of the red carpet opening, blowing the crowd away in a stunning red dress which featured silver detailing and a long train.

She finished the look off with a unique snake bracelet and was accompanied by husband Chris Hemsworth who dressed in black, with his top button undone instead of a tie.

Socialite Christian Wilkins was among the first to step out onto the red carpet, redeeming his ‘worst-ofs’ outfit from last month’s ARIAS with a stunning, bejewelled bodice and oversized suit pants. 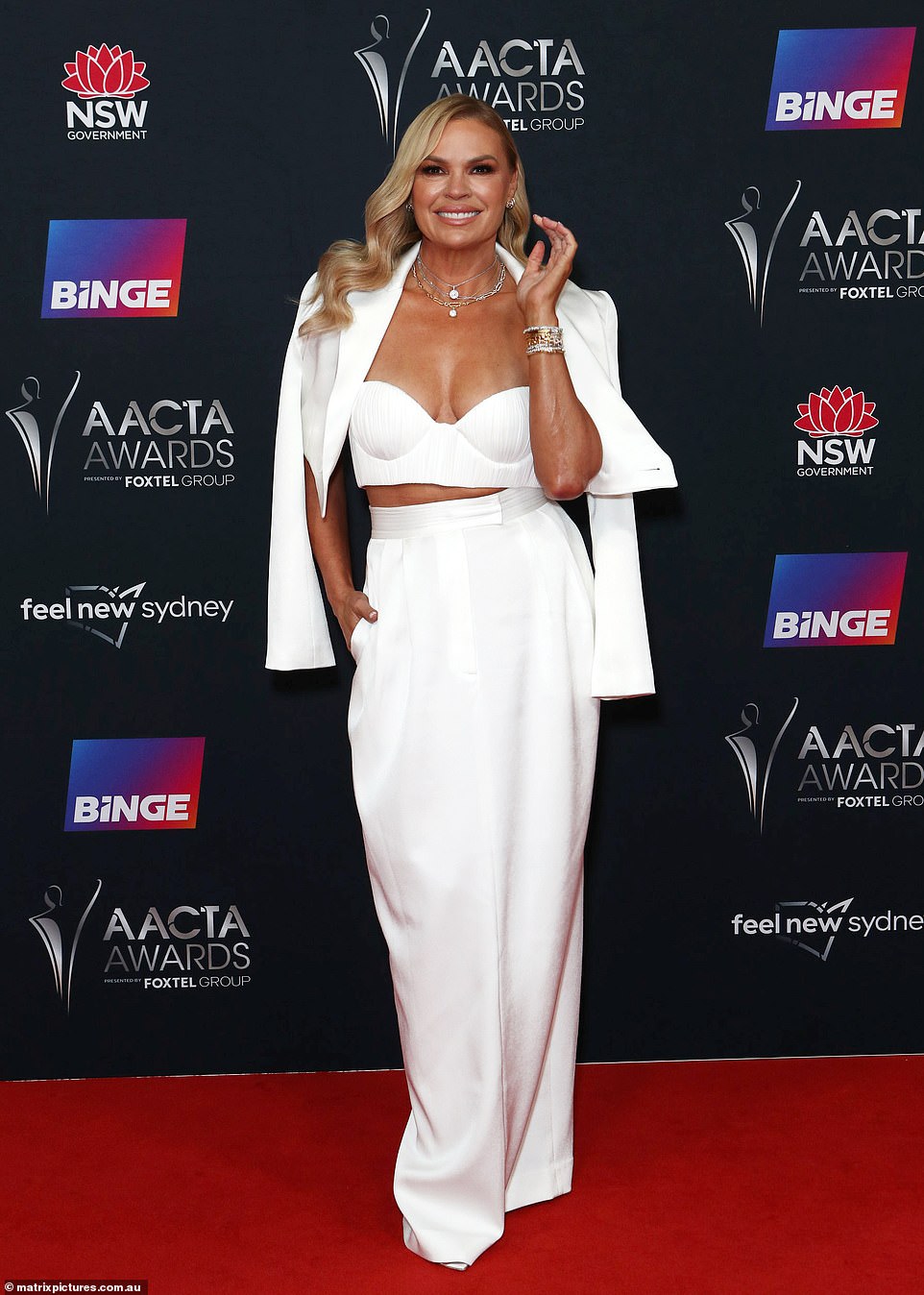 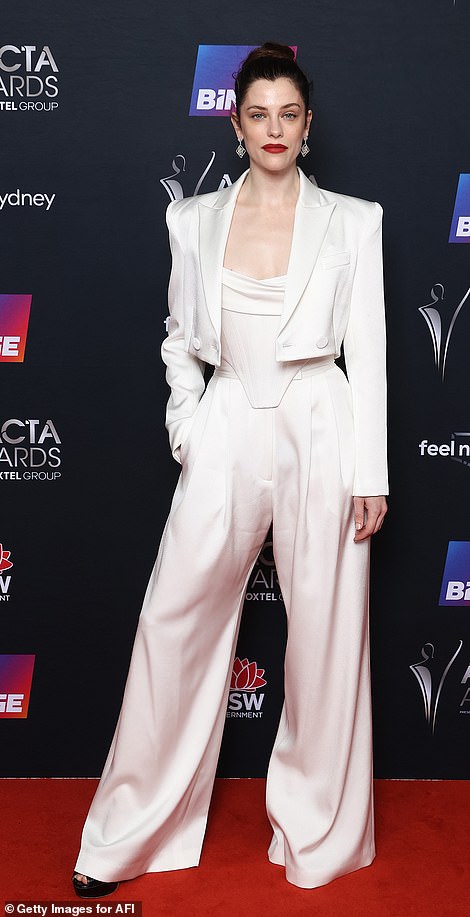 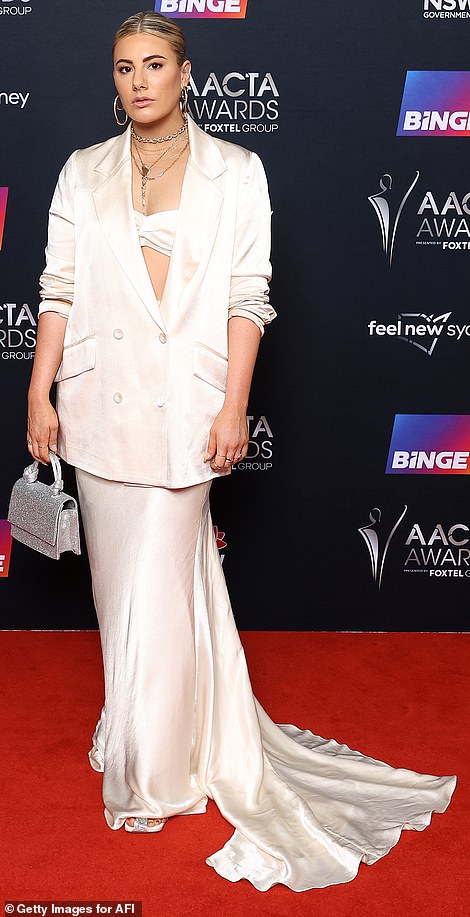 The Huntress Jessica De Gouw also pulled off the white three-piece suit trend, wearing a corset over oversized pants and black strappy shoes for the occasion. Emily De Margheriti didn’t manage to pull off the trend though and looked awkward in her three-piece suit

He added a dramatic train ‘bow’ to the outfit and wore a simple necklace and his luscious locks down for the event, giving them a flick as he faced photographers at the end of the runway.

Francesca Hung managed to impress in a sherbet orange mini dress which she paired with 70s style orange hoops and fun green heels.

Amanda Keller shone in this gorgeous black sequin gown, wearing her hair slicked back to show off her eyes and statement earrings, earning her a place on the best-of list for this year’s awards. 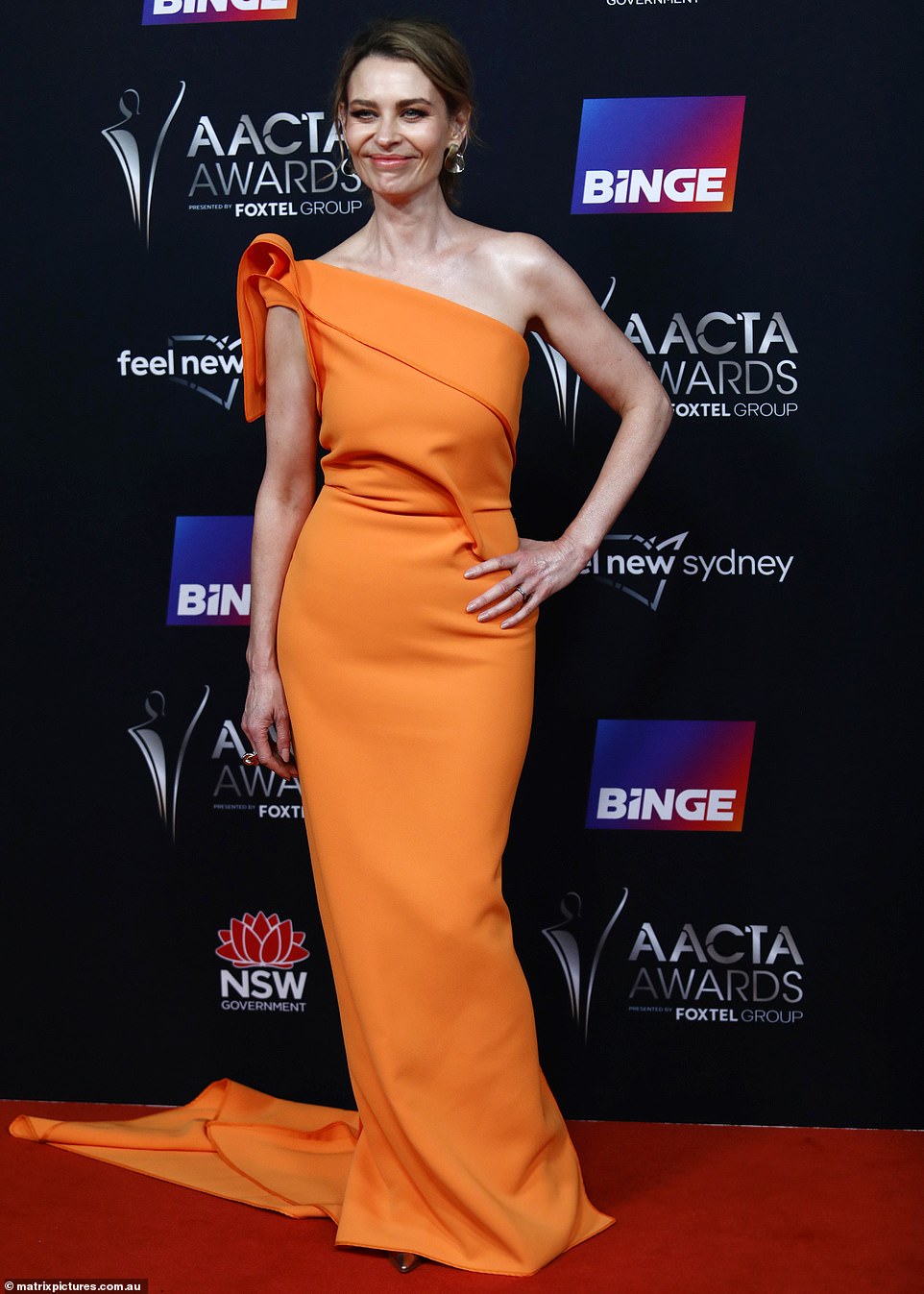 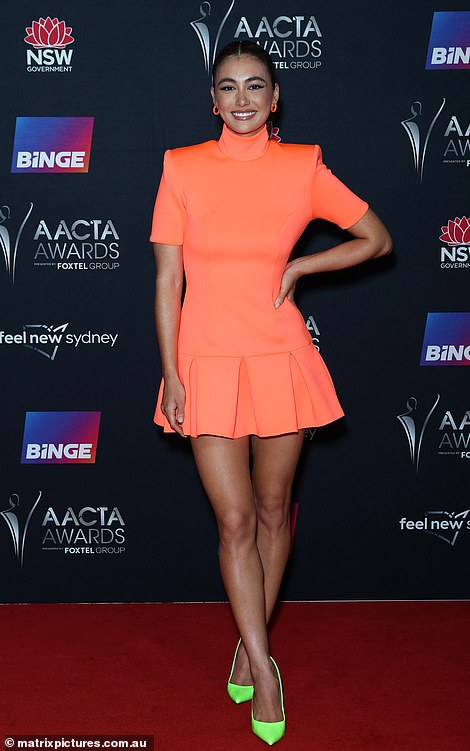 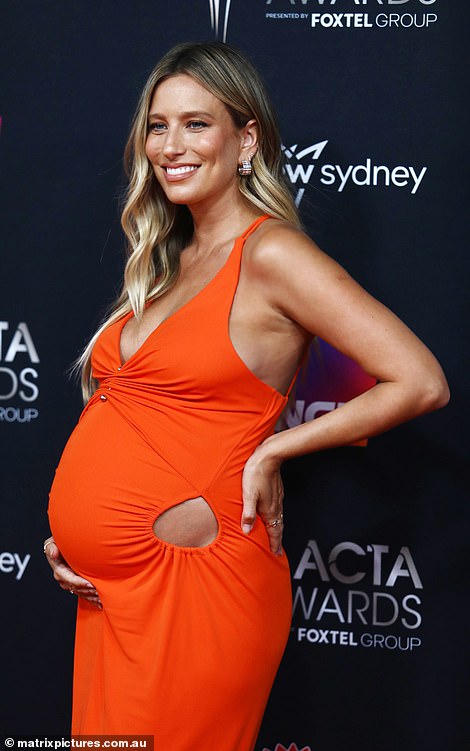 Francesca Hung proved she belongs on the best dressed list with this orange and green outfit while Renee Bargh glowed as she walked the red carpet in a bold orange gown, with one hand on her baby bump 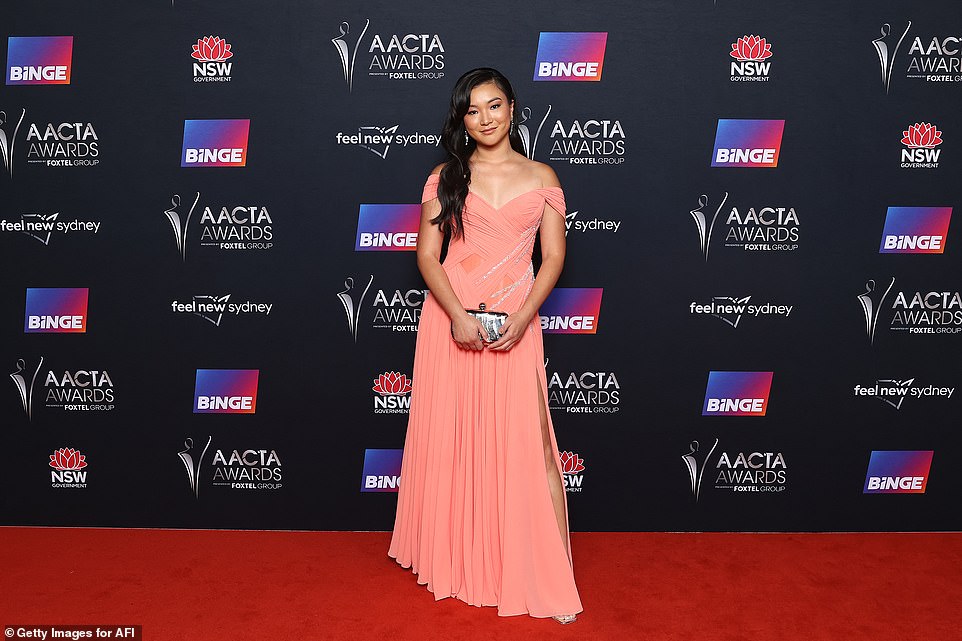 Goldstone’s Michelle Lim Davidson looked beautiful  in her off the shoulder gown, the side slit adding a sexy touch to the otherwise sweet look

The Huntress Jessica Se Gouw also pulled off the white three-piece suit trend, wearing a corset over oversized pants and black strappy shoes for the occasion.

She looked powerful with her hair pulled back and dark red lipstick to add a pop of colour to the look.

Offspring’s Kat Stewart stunned in an epic one-shouldered tangerine gown which she paired with metallic point-toe shoes and statement earrings.

The veteran television star proved the trend toward orange statement outfits can be done in a sophisticated way.

Goldstone’s Michelle Lim Davidson looked beautiful in her off the shoulder gown, the side slit adding a sexy touch to the otherwise sweet look. 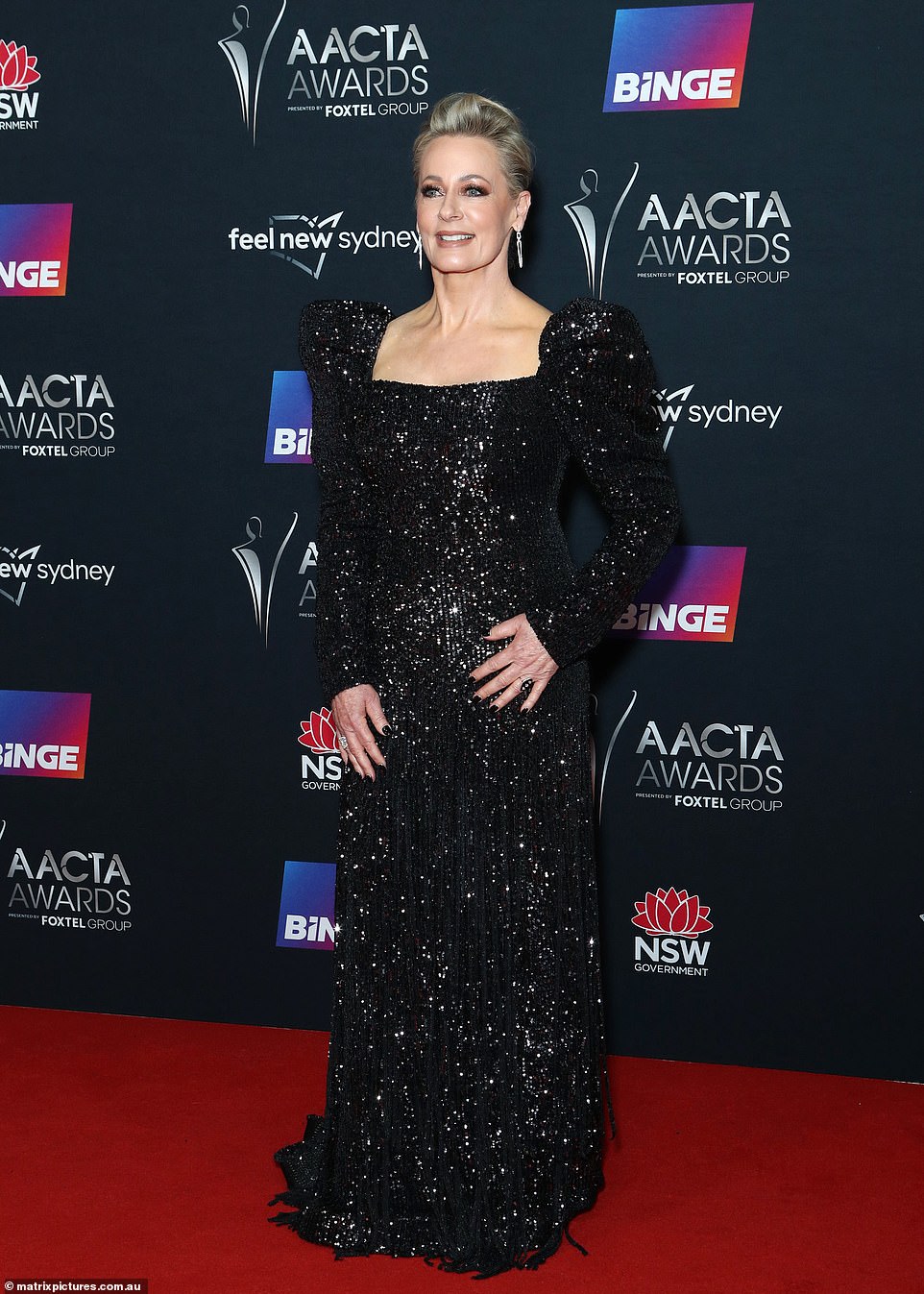 Amanda Keller shone in this gorgeous black sequin gown, wearing her hair slicked back to show off her eyes and statement earrings

The E! presenter, who is known for her impeccable taste, wore her hair pulled back tight and grinned as photographers stopped her for photos.

Sonia Kruger stunned in a three-piece white skirt suit which she paired with gold and silver accessories and pointed shoes, creating a flawless look.

The popular television presenter looked relaxed as she smile for the cameras, with one hand in her pocket and her blazer draped effortlessly across her shoulders.

Entertainment reporter Renee Bargh glowed as she walked down the red carpet in a bold orange gown.

The mother-to-be held her baby bump and grinned at the media pit before embracing friend Christian Wilkins, who also made it onto the best dressed list. 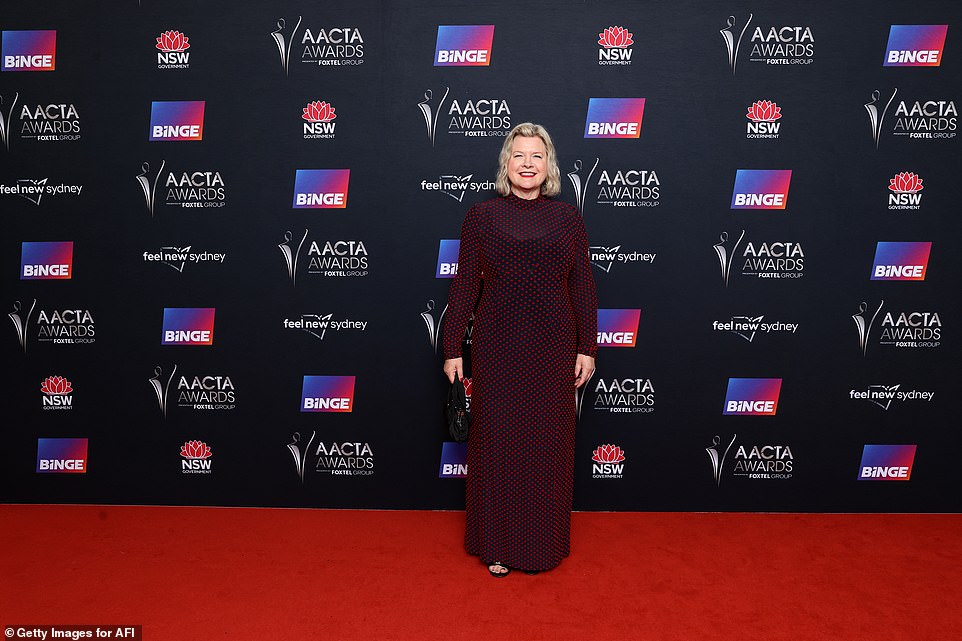 Award winning cinematographer Mandy Walker played it sage in a humble gown, but looked excited ahead of the evening 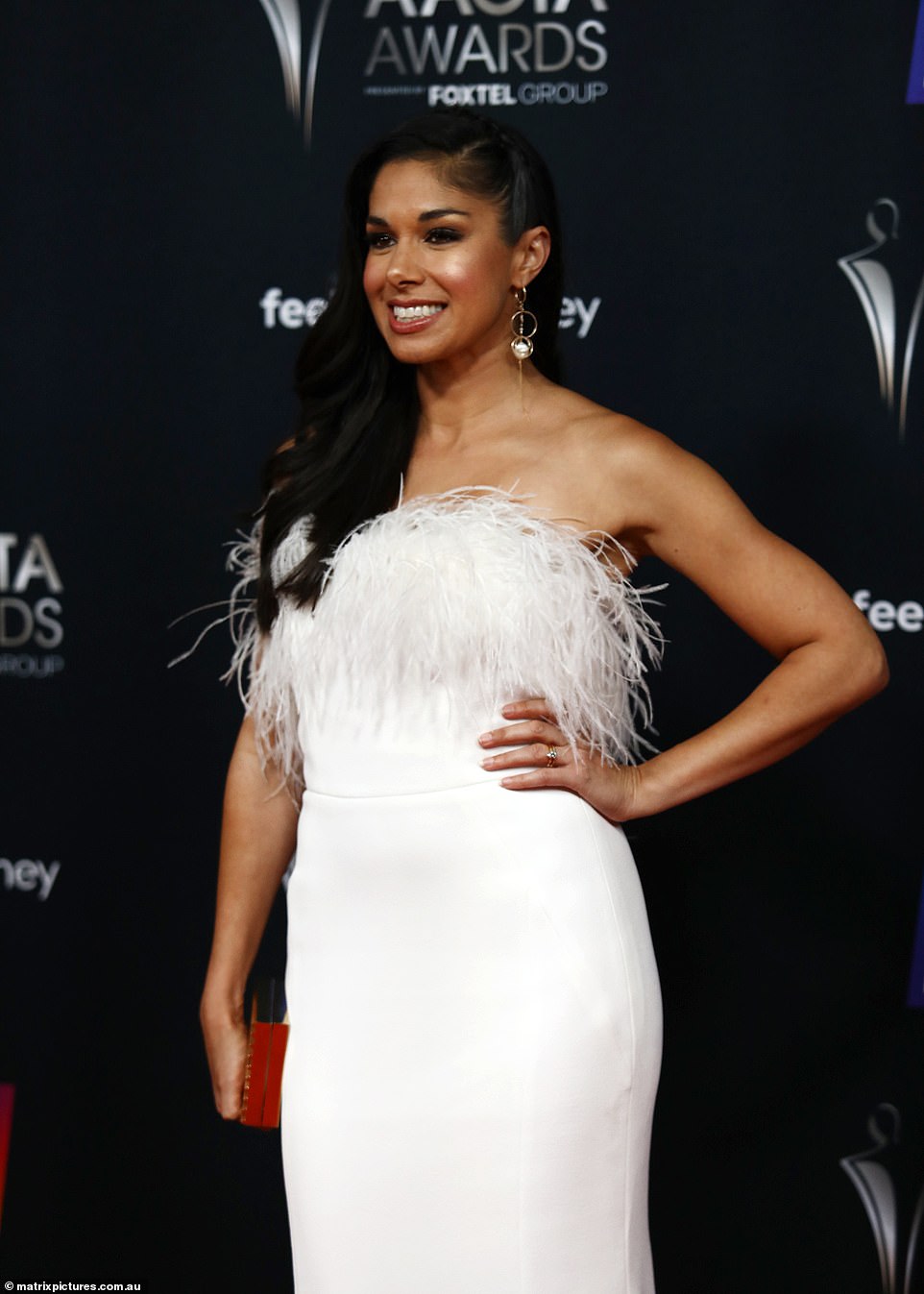 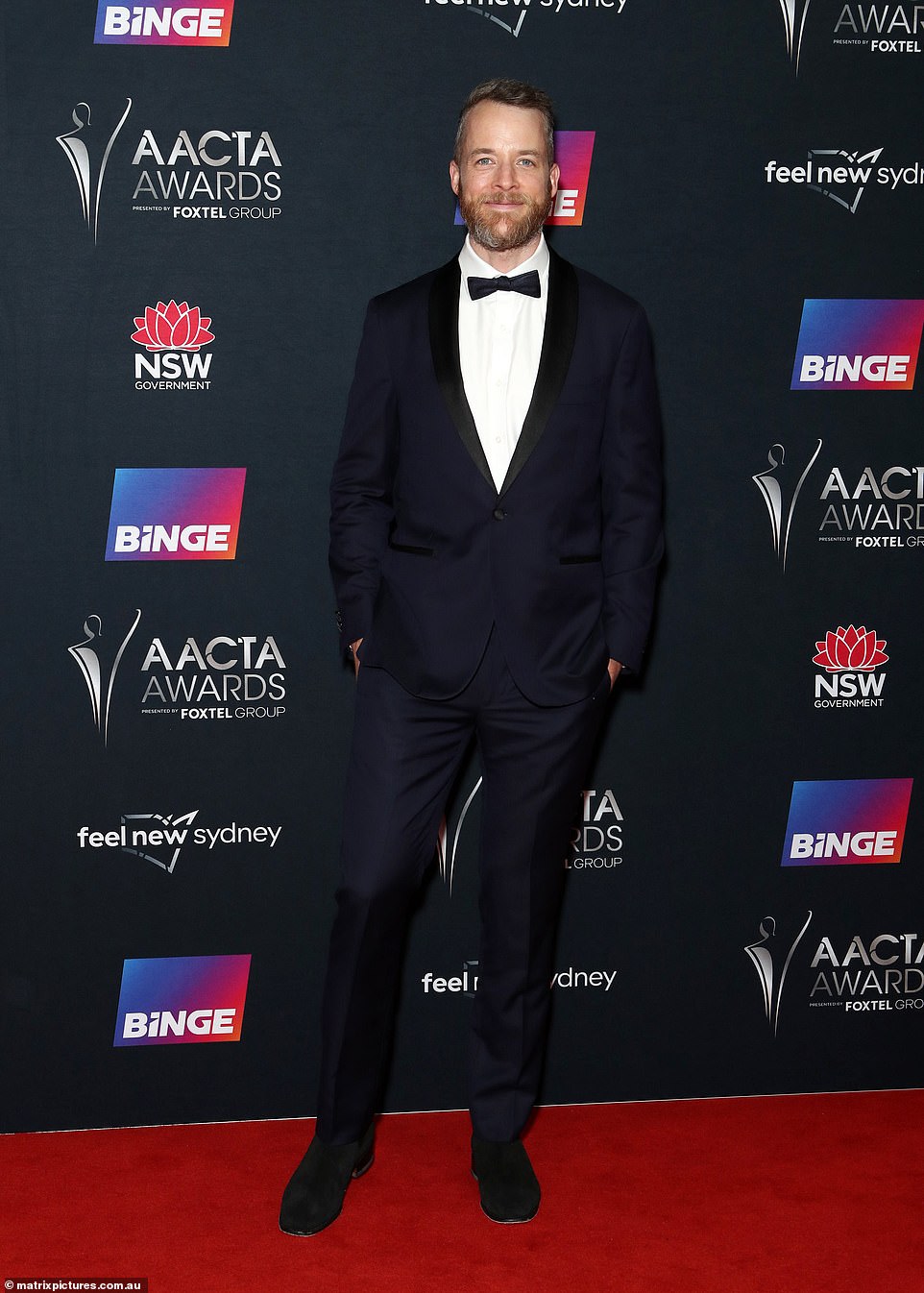 Cinematographer Mandy Walker, Home and Away’s Sarah Roberts and funny man Hamish Blake played it safe with their looks, which failed to impress but weren’t offensive enough to land them among the worst-dressed attendees at this year’s event.