The best cider farms to visit this autumn in Somerset, Devon, Gloucestershire and North Yorkshire

The harvest is now in and the fruity golden glow of cider is inextricably linked to the glorious season that is a British autumn. There’s nothing more relaxing than walks in orchards and tastings on farms surrounded by the wonderful smell of fresh apples. And cider is no longer a rough and ready drink – consider it to be artisanal, small-batch and award-winning.

Soil conditions and climates in counties such as Somerset, Devon and Gloucestershire are perfect for apple cultivation. Indeed, the West Country dominates cider production and is home to the world’s largest cider-maker, HP Bulmer.

However, a good place to start on a cider tour is at the Brogdale Collections in Faversham, Kent, home to the National Fruit Collection. It’s one of the largest in the world and includes more than 3,500 apple, pear, plum, cherry, bush fruit, vine and cob nut cultivars.

Harvest festival: One of Somerset’s most picturesque spots is Burrow Hill near Martock, where cider has been made for more than 200 years

Owned by the Department for Environment, Food and Rural Affairs (Defra), it is part of an international programme to protect plant genetic resources for the future. Visitors can take daily orchard walking tours or tractor trailer tours until the end of October. Fancy learning how to make cider? Choose a day course this month or in November (brogdalecollections.org).

Alternatively, head towards Canterbury to Woolton Farm, where four generations of the Mount family have grown apples. They’ve now opened their Kentish Pip farm shop and bar in a spectacular wood and thatch barn, and visitors can explore paths through pretty orchards. There are weekend barbecues, and regular tours and cider tastings. Make a real break of it by staying in one of their self-catering cottages, glamp in fruit garden bell tents, or treat yourself to a luxury converted riverside oast house (wooltonfarm.co.uk).

Near Rye in East Sussex, Tillingham vineyard and hotel makes cider sold in pottery jars. Explore its autumn woods, then try gourmet creations such as roast lamb and fried marrow in a converted Dutch barn restaurant.

If you want to stay, check in to one of the chic bedrooms in an old hop barn. B&B costs from £165 a night (tillingham.com). 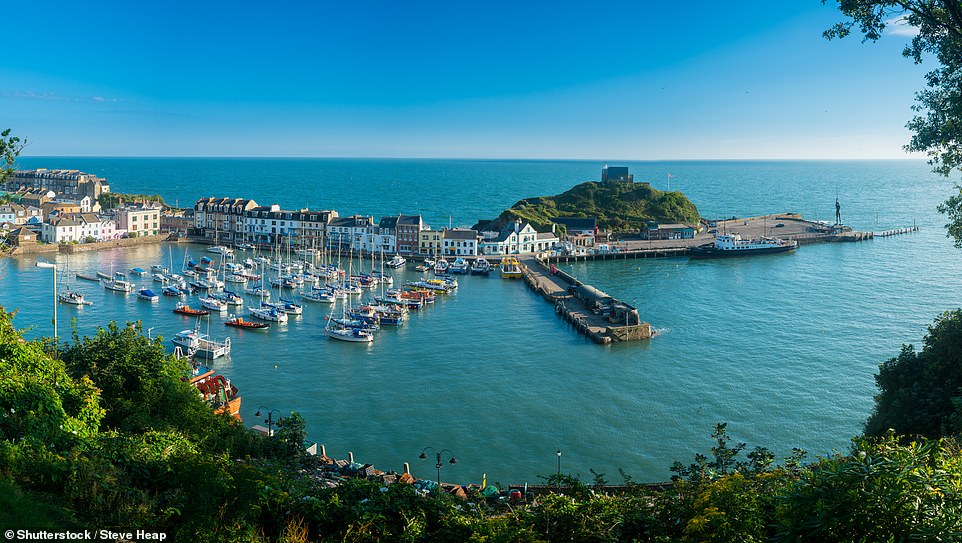 Further west, under a South Downs ridge near Lewes in East Sussex, you’ll find Middle Farm. Its National Collection of Cider showcases a massive range of more than 350 ciders, housed in a picturesque brick-and-flint barn where heavy ploughing horses once rested.

There’s plenty for non-drinkers, with a prize-winning farm shop, a delicious menu in a wooden-beamed cafe and a family nature trail (middlefarm.com).

Surrealist artist Salvador Dali was an unlikely fan of cider and admired West Dean Gardens, near Chichester. It’s a heavenly retreat of Victorian riverside gardens, with 13 glasshouses of exotics such as orchids and nectarines. Cream teas are served in a gardener’s cottage and you can get lost on leaf-crunching arboretum walks. Best is a high-walled orchard with more than 100 apple and pear varieties, some forming a spectacular tree tunnel. Scores of apple varieties are displayed inside a cute round apple house with flint walls and a tiny thatched roof (westdean.org.uk). 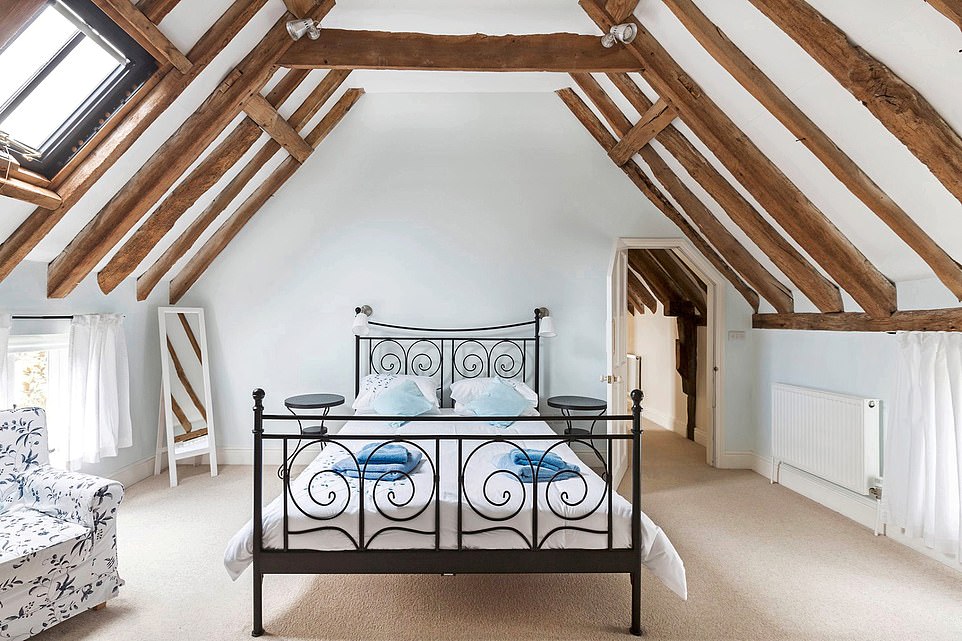 Full beam: A spacious bedroom at the family-run Woolton Farm near Canterbury 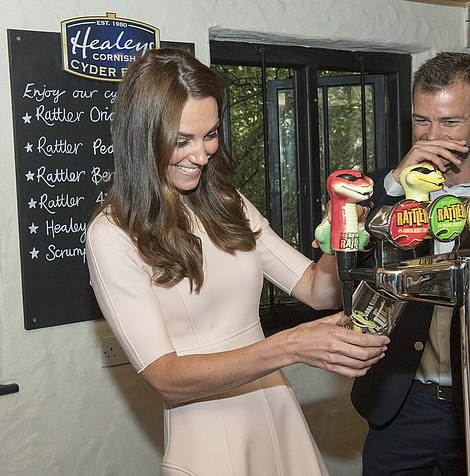 The most famous visitors to Healeys Farm near Perranporth, Cornwall, were the Duke and Duchess of Cambridge in 2016. It’s home to Rattlers cider and locals remember Kate giggling as she poured William a pint

To stay near Chichester, check in to Crouchers Orchards, a hotel, restaurant and self-catering cottage complex on a former cider-making farm. There are 36 acres of canalside orchards to explore. B&B costs from £130 a night, and two-bed cottages start at £200 a night (crouchersorchards.co.uk).

An eccentric take on apple fizz can be found at Mill House Farm’s Cider Museum near Dorchester. It’s a quirky introduction to the Hardyesque world of Dorset cider.

Be warned – it’s not easy to find (through a five-bar gate off a leafy country lane) but visitors are proudly shown more than 40 old cider presses in a cattle shed, plus apple paraphernalia collected from West Country farms.

In neighbouring Devon, Whiteways orchards, surrounding the thatched whitewashed cob cottages of Whimple, were once Europe’s biggest. It even exported thousands of gallons of cider to America during the post-Prohibition era.

Visitors to Courtney’s farm shop can still walk through large areas filled with historic apple trees, which in late summer are laden with fruit (courtneysofwhimple.co.uk). The family cider farm is also running fun day-courses in making cider this month (virginexperiencedays.co.uk).

For a taste of Exmoor sea air, visit Caffyns Farm in Lynton, which offers a wealth of rural experiences, with clifftop horse rides, five fields to camp in, cream teas in an old barn and Exmoor cider on tap. Its 2,000 apple trees overlook the sea and the owners spend autumn making cider with a traditional press, and hold day-courses in cider-making for visitors.

Camp (from £10 a night) or stay in the farmhouse, where B&B costs from £35pp (exmoorcoastholidays.co.uk/cider.html).

After Darts Farm near Topsham won the 2020 UK Farm Shop of the Year, it opened a Cider Innovation House showing how cider is made, with a chance to sample a huge cider stock, including the family’s own cider made on their 100-year-old press. There’s also a drinks cellar and tastings bar.

This once humble riverside farm is now a very lavish enterprise which boasts a thriving lifestyle and artisan hub that includes an Aga shop, Fired Earth and Orange Tree store and a spa. There are also bike trails, bird hides, nature walks and fishing ponds. For food, choose from The Fish Shed, The Shack or The Restaurant. Visitors can book for a West Country cider-tasting experience for £35 (dartsfarm.co.uk). 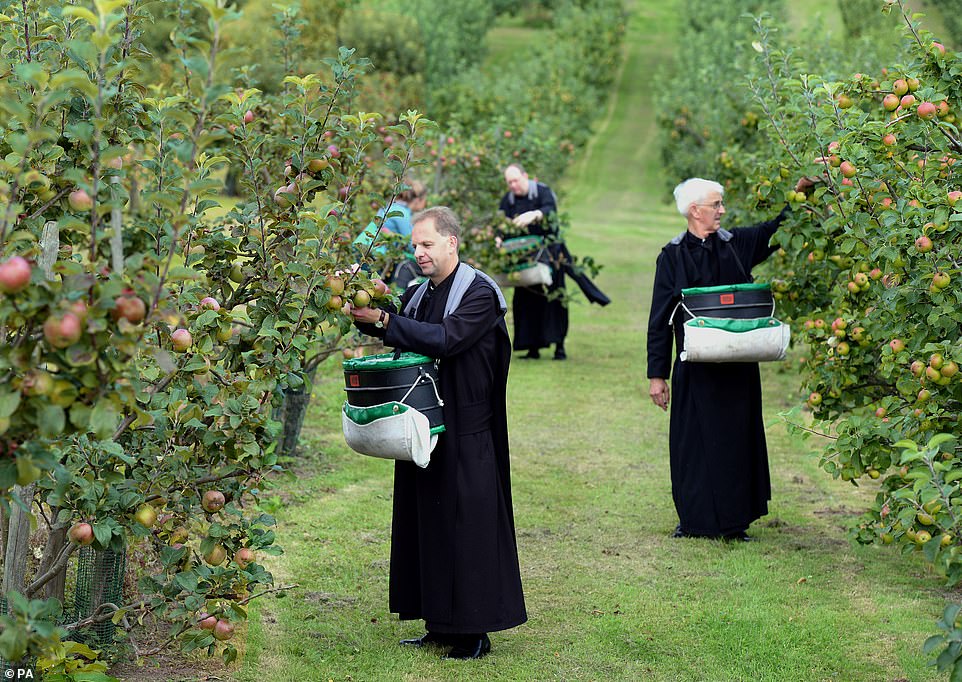 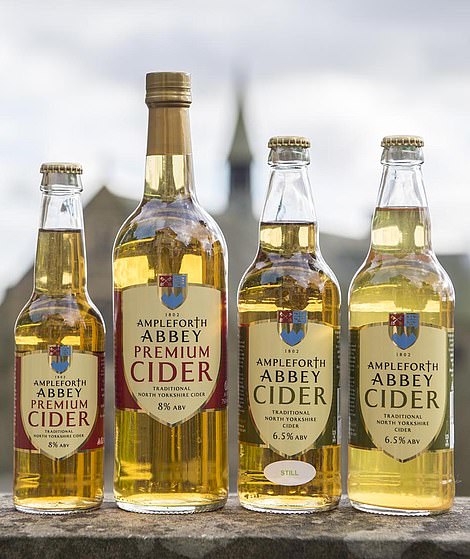 Cider is no longer a rough and ready drink – consider it to be artisanal, small-batch and award-winning. Pictured is Ampleforth Abbey Cider

To keep up the rural bliss, check in to Mary’s Cottage near Ilfracombe (indicknowle.co.uk/marys-cottage/), a pretty holiday cottage in a historic cider farm. See how the farming family uses heritage apple varieties such as Sweet Coppin and Cornish Gilliflower to make Indicknowle Cider (hint: they use wood-and-straw presses and oak barrels unchanged since 1870). The property sleeps six and costs from £320 a week.

The most famous visitors to Healeys Farm near Perranporth, Cornwall, were the Duke and Duchess of Cambridge in 2016. It’s home to Rattlers cider and locals remember Kate giggling as she poured William a pint. Sit back and relax as you trundle through orchards pulled by a vintage tractor, tour the cider works and sample ciders. There’s also a small farm animal zoo, produce shop and cream tea cafe (healeyscyder.co.uk).

Stay close by at Tremayna Farm in Bude, where Crackington cider is served. The owners have built a new outdoor bar to safely serve samples and visitors can see the old cider equipment in the barn next door.

Stay in the luxuriously converted Old Cider House and find complimentary cider in the welcome pack. The property, which sleeps two, costs from £296 a week (crackingtoncider.co.uk) 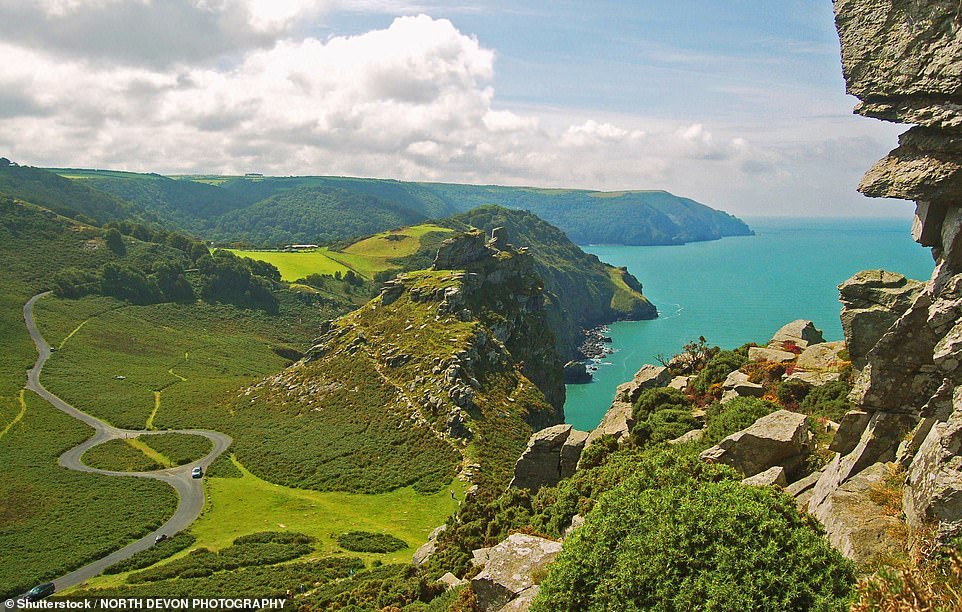 Lynton is home to Caffyns Farm, which offers a wealth of rural experiences, with clifftop horse rides, five fields to camp in, cream teas in an old barn and Exmoor cider on tap

One of Somerset’s most picturesque spots is Burrow Hill near Martock, where cider has been made for more than 200 years. Climb Burrow Hill’s prominent mound for staggering views of 180 acres of orchards and across prime cider country, the Somerset Levels. Then walk on organic orchard trails next to grazing sheep among trees laden with 40 vintage varieties of cider apples, see house-sized piles of apples in the yard and ancient oak vats, barrels and presses in the cider house.

A 90-minute tour shows how they make cider and their speciality, a distilled cider brandy. Check in at nearby Haselbury Mill hotel, which serves Burrow Hill ciders in its apple-themed restaurant. B&B rooms cost from £120 a night (haselburymill.co.uk). Close by is The Rusty Axe, Somerset’s Gastropub of the Year, serving scrumptious classics such as prawn cocktail and beef and ale pie (therustyaxe.co.uk).

No cider tour would be complete without mentioning the Cotswold village of Slad where Laurie Lee wrote his autobiographical account of a rural upbringing, Cider With Rosie. Lee’s grave is close to the honey-coloured stone pub, The Woolpack, which featured heavily in the story. Today The Woolpack celebrates his memory with four ciders on tap, a collection of Laurie Lee artefacts and a bookshop. Diners can enjoy great views while sampling mussels in leeks and cider (thewoolpackslad.com). 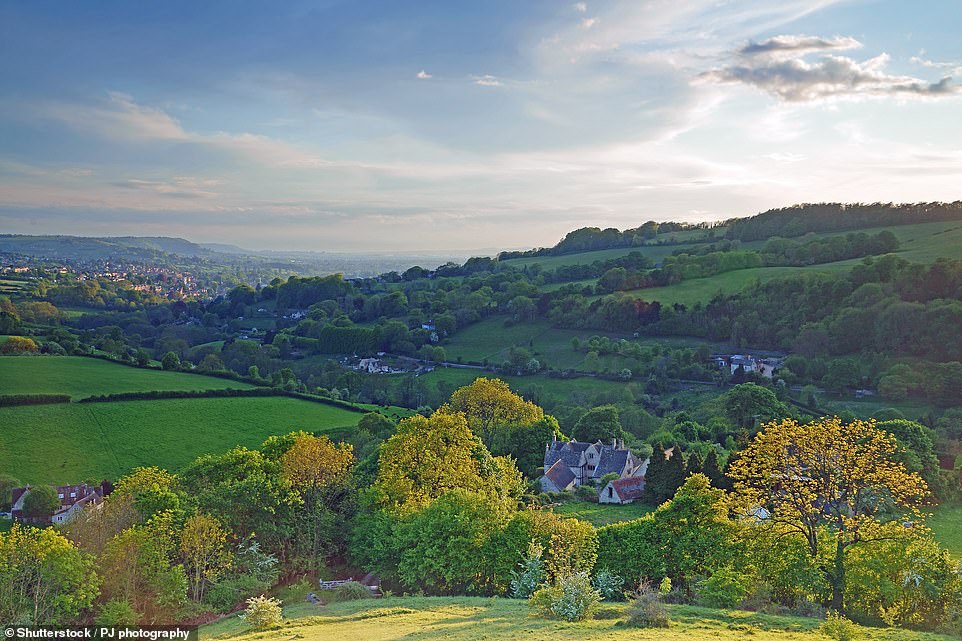 No cider tour would be complete without mentioning the Cotswold village of Slad where Laurie Lee wrote his autobiographical account of a rural upbringing, Cider With Rosie

There are orchard walks on the estuary banks if you visit the award-winning Severn Cider, Newnham, in the Forest of Dean. The family cider farm and mill runs regular tours, cider-making sessions and tastings-with-food-pairings. Visitors can stay on the farm in elegantly converted wooden-beamed stables from £120 a night (airbnb.co.uk/rooms/39230116).

In the North, Ampleforth Abbey in North Yorkshire is home to Benedictine monks who make some of Britain’s most highly acclaimed ciders in the heart of the rolling Howardian Hills. Divine walks pass the heavily laden orchards and cider mill en route to the teashop for applecakes and Abbey cider (ampleforth.org.uk/visitors).

Holmfirth in West Yorkshire may be better known for the TV series Last Of The Summer Wine, but it’s also home to Pure North Cider Farm, where you can take an orchard and cider press tour. There are lamb burgers or pork with home-made apple sauce in their cafe (purenorthciderpress.com).