The best glamping sites in the UK, from Henley to the Highlands

Glamping? That’s not real camping! This is my husband’s response when I suggest we upgrade from tents for a family holiday in Norfolk. He proceeds to wax lyrical about the joy of dewy grass underfoot on the morning dash to the compost loo and the incomparable closeness to nature that only a night spent with a thin layer of canvas between you and the elements can provide.

We’re a family of seasoned campers. I was weaned on spaghetti hoops cooked over a Primus stove and introduced my husband to the delights of the outdoors life. He and our children have taken to roughing it with gusto, so much so that he’s now sceptical about stepping up to glamping.

For the kids, it’s an easier sell. My seven-year-old daughter takes a literal approach and sets about packing her most glamorous sequinned outfits, while my ten-year-old son asks hopefully about charging facilities for his iPad.

Eve McGowan stayed at Wild Luxury in Norfolk, just outside the village of Thornham, and was impressed with her comfy surroundings

It’s this clamour for outdoor living but with the convenience of modern luxuries that have seen glamping sites pop up all over the country, from the safari tents of Bainland Lodge Park in Lincolnshire, with hot tubs and welcome packs for dogs, to the isolated hideaways of Idaho Cabin in East Sussex or a taste of off-grid life on the shores of Loch Rusky in the Highlands.

On arrival at Wild Luxury in Norfolk, just outside the village of Thornham, we’re greeted by bubbly camp manager Tash. She whisks away our bags and children on her motorised buggy, leaving us to follow along with the rest of our kit in wheelbarrows. No cars are allowed on site, adding to the sense of peace.

It’s in marked contrast to how these trips usually begin. Instead of a good hour or two of frenzied action setting up camp, within minutes I’m enjoying a cup of tea on our safari lodge’s corner sofa. 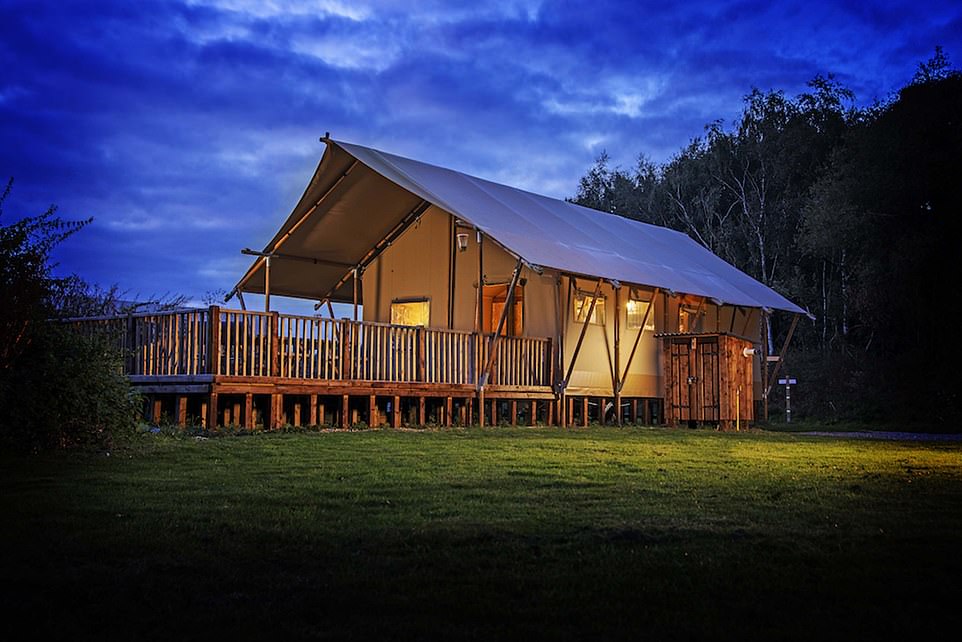 Roughing it in style: Top UK glamping sites include Bainland in Lincolnshire

There’s something instantly relaxing about the setting, a comfier and warmer version of camp life than we’re used to that still feels immersed in the natural surroundings. Just outside our lodge is a firepit for the all-important campfire experience (a deal breaker for my husband) and plenty of space for ball games and kite flying.

Our lodge is in Top Camp and one of just three spread across a large field next to an apple orchard. It’s part of a family fruit business that’s been here for generations. There are eight further lodges in Home Camp, a few fields along. The lodges are fundamentally the same, although the Top Camp lodges have the added bonus of charge points, fridges, hairdryers and even electric blankets. Home Camp has a Pamper Pod with hairdryer and straighteners, make-up stations and a treatment room for massages and facials.

The lodges are spacious, with a large open-plan dining/living area, two double bedrooms as well as the delightful cabin bed in a cupboard where the children are excited to be sleeping. We discover our neighbours have comfortably fitted five children in theirs, while the family of four in the other lodge have brought along the grandparents.

Throw in the flushing toilets, fully plumbed sinks and hot showers, not to mention a well-equipped kitchen, and it’s not far off your average holiday cottage.

Tucked away in a private lane behind Drove Orchards, the site is an attractive set-up that includes Drove Farm shop, Gurneys fishmongers – where we bought cooked lobster and dressed crab for picnics – some lifestyle stores, a yurt cafe and a play area. We adored Eric’s, an upmarket fish and chip restaurant (the delicious chips are cooked in beef dripping). And if you’re craving a strong coffee, Thornham Deli is a ten-minute walk away through the fields and a great spot for brunch.

Camping in spring and autumn can be touch-and-go. While we’ve enjoyed heatwaves (Easter 2011 was a vintage year), we’ve also suffered cold nights when no amount of blankets can keep out the chill.

Thankfully that’s not an issue at Wild Luxury. All lodges come with a wood-burning stove – what my husband gleefully calls the ‘monster’. His eyes light up at the supply of logs in the woodstore behind our shed, which is replenished daily, and I sense his attitude towards glamping is beginning to thaw.

The lodges also have super-comfy beds with duvets and pillows. I don’t think I’ve ever felt cosier, snuggled up with my book listening to the owls hoot in the woods outside. 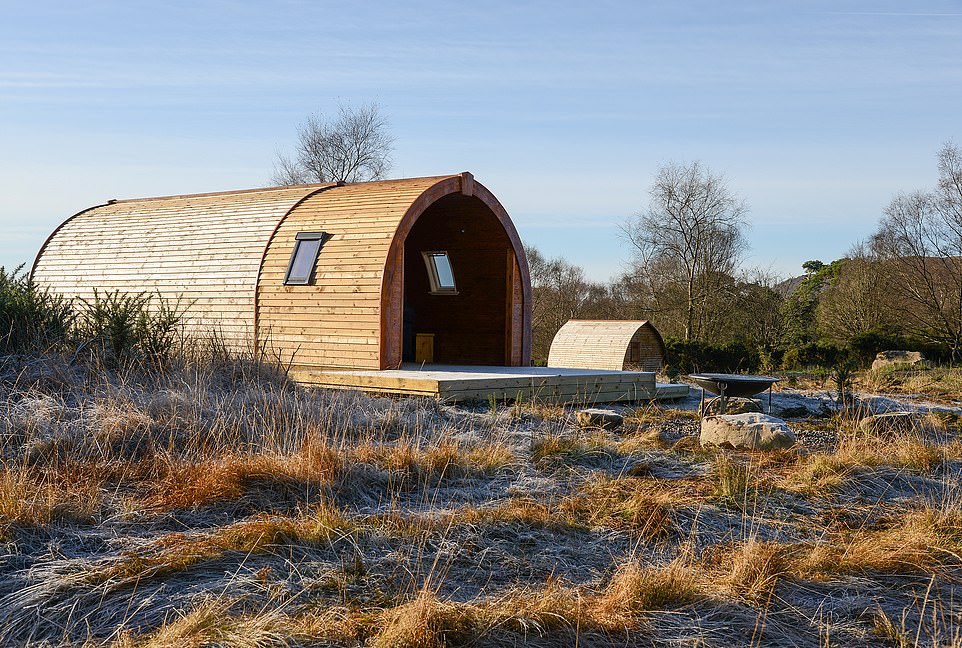 Consider renting a pod at Loch Rusky in the Highlands, pictured above, for a taste of off-grid life

On our first morning, we take a windy walk to Holme Dunes – a stunning wide sandy beach 25 minutes from the gate at the bottom of the field.

We find a sheltered spot in the dunes while the children play, but for keen walkers the North Norfolk Coast Path runs from here through every coastal village as far as Cromer. You could walk the path for the day and then catch the Coasthopper bus back to camp. The camp is brilliantly located for exploring the picture-perfect north Norfolk coast. We take a trip with Beans Boats to see the seals at Blakeney Point. The boat sets off from Morston quay, a 40-minute drive away (do book in advance).

We also paid a visit to the gorgeous beach at Wells-next-the-Sea, walking past the pastel-coloured beach huts on stilts, along the sand dunes to Holkham Bay, stopping to build sandcastles and collect shells along the way. We walked back to Wells through the pine forest for a well-earned ice cream from the van in the beach car park. 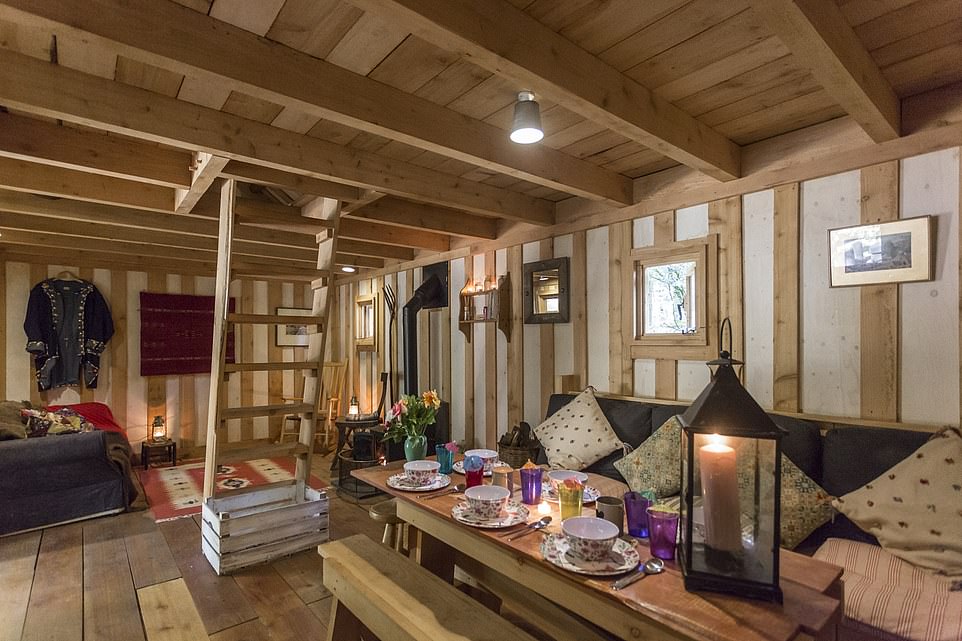 Live out your Little House On The Prairie fantasies in a quaint Idaho cabin in Forest Garden, near East Grinstead in East Sussex

On our last evening, we picked up takeaway fish and chips and ate them on the beautiful Old Hunstanton Beach, a five-minute drive from the campsite, watching the sun set.

Probably our favourite thing, though, was relaxing at camp and enjoying games of cricket and swing ball and toasting marshmallows over the firepit, watched by the odd passing pheasant, before cosying up in our lodge for the evening. Refreshed, rested and relaxed, this was definitely not camping as we know it. I just hope that our glamping experience hasn’t ruined us for the ‘real’ thing.

Eve McGowan was a guest of Wild Luxury (wildluxury.co.uk). The site reopens on July 4 and can be booked for weekend, midweek and full-week stays. Prices cost from £295 in low season to £1,395 for a week in August.

Henley to the Highlands… Staycations for everyone

Glamping’s scenic locations, generously spaced pitches and lashings of fresh air mean you would be hard-pressed to come up with a safer holiday option in these socially distanced times.

The popularity of glamping was already soaring prior to Covid-19, according to Martin Smith, founder of the website Campsites, which lists more than 3,000 locations across the UK. He says: ‘Since restrictions have lifted we’ve seen record numbers of bookings – campers can finally book with confidence and look forward to a summer under canvas.’

If glamping is about going off-grid, then the pair of cabins on the shores of Loch Rusky in the Scottish Highlands deliver this in spades. Set in 160 idyllic acres of pine forest on a working deer farm, you’re likely to spot wild roe deer, ospreys and red kites. 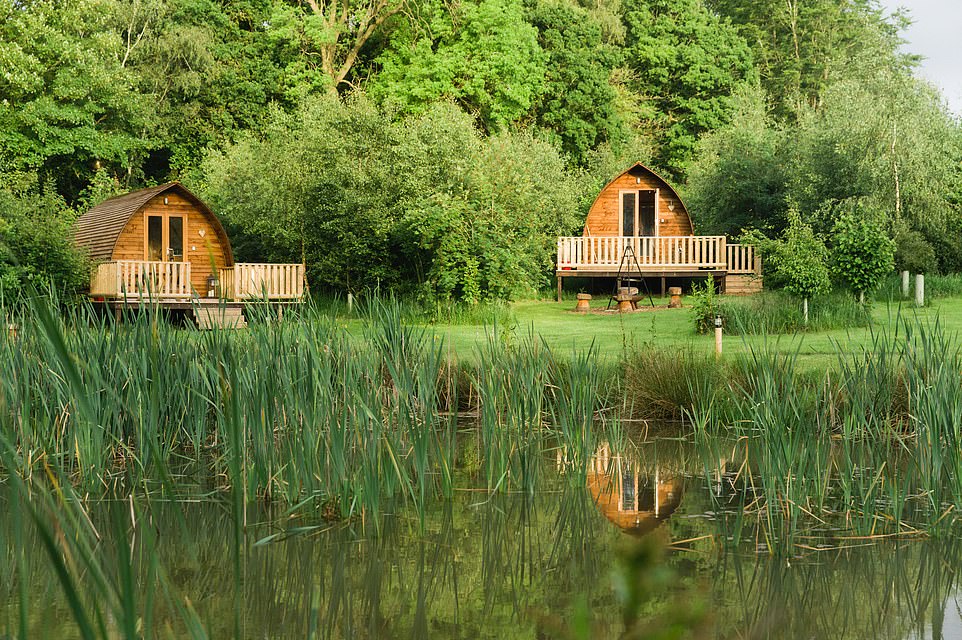 Secluded: The glamping site in Charnwood Forest, near Leicester, overlooks a wildlife pond

Each cabin comes with a kingsize bed, kitchenette and shower, as well as cosy blankets and sheepskins. Loch Rusky is an hour’s drive from Edinburgh and Glasgow, or the owners can collect you from the railway stations at Bridge of Allan or Stirling (kiphideaways.com).

Families, ours included, return year after year to camp by the sea at Eweleaze Farm in Dorset, which opens for just four weeks every August. Pitch up your own tent, or hire a bell tent complete with comfy beds, bunting and fairy lights, and enjoy views across the bay to Weymouth and Portland Bill.

Go rockpooling or take a dip at the private beach, and enjoy refreshments at the site’s patisserie, farm shop, juice bar and pizza van. Outdoor yoga classes every morning are not to be missed. Bell tent hire costs from £50 a night, or regular camping is from £9 per adult per night and £4.50 per child per night (eweleaze.co.uk).

Embers Camping has five glamping sites in the UK. These include one on the Pylewell Estate, close to Lymington in Hampshire’s New Forest, with stunning views of the Solent and Isle of Wight, and another on the River Thames, just outside the picturesque town of Henley-on-Thames, Oxfordshire.

Each peaceful pitch comes with a fire basket and you can hire a bell tent or take your own. There’s a well-stocked shop and the wood-fired pizzas come highly recommended. Stays cost from £20 per adult per night plus £50 for a bell tent per night, with a £50 set up charge (emberscamping.co.uk).

Live out your Little House On The Prairie fantasies in a quaint Idaho cabin in Forest Garden, near East Grinstead in East Sussex. It’s set in a glade in several acres of ancient woodland and sleeps four. The owners offer activities such as woodwork classes, mushroom foraging, willow weaving and cooking up lip balm from their own beeswax. A three-night weekend stay is from £490 (canopyandstars.co.uk). 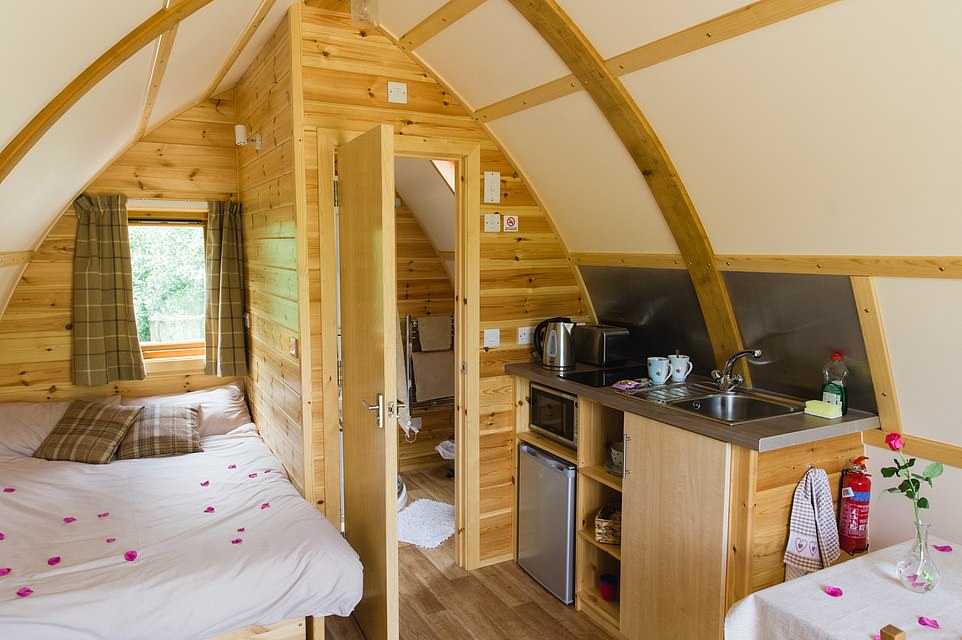 Comfy: Wigwam’s heated pods come with most mod cons including firepits on private terraces as well as en suite bathrooms

At Alderfen Marshes in the Norfolk Broads National Park, campers are given use of their own Canadian canoe to explore the labyrinth of waterways. The remote adults-only campsite has four pitches but has cut it down to two for this summer. Two nights for two adults costs £130, or three nights is £180. Hire a teepee or use your own tent (campsites.co.uk).

Wigwam has more than 80 glamping sites across the UK. Its heated pods have firepits on private terraces as well as en suite bathrooms. The site at Charnwood Forest near Leicester is particularly appealing as it overlooks a wildlife pond. Prices in high season start at £90 per night, based on one cabin and two people sharing (wigwamholidays.com).

New to camping? Then dip your toe in at the luxurious end with a safari tent at the 45-acre Bainland Country Park in Woodhall Spa, Lincolnshire, and you won’t have to sacrifice any of your creature comforts.

An on-site Starbucks delivers to your door plus bike hire and tennis is available. All lodges come with hot tubs on the deck.

Tents sleep up to six people, or the new two-storey ‘big beasts’ sleep up to eight. All come with a log burner and