Summer has made way for autumn, and the leaves of mighty oaks, towering beeches and Japanese maples are changing from shades of green to mellow yellows, flaming reds and deep browns.

As October clicks in, ‘leaf peeping’ adventures — the term coined by our friends across the Pond to describe seeking out the season’s boldest colours — are increasingly popular.

They are a double delight. For while Mother Nature brandishes a paintbrush over the northern hemisphere’s most beautiful woodlands, it’s also the time when tour operators, hotels and airlines send prices falling along with the leaves.

As October clicks in, ‘leaf peeping’ adventures — the term coined by our friends across the Pond to describe seeking out the season’s boldest colours — are increasingly popular

But how can you tell if we’re poised for a cracker when it comes to colour?

There are, explains National Trust gardener Toby Yorke, a few factors that can predict whether a showstopper is on its way. He says: ‘Throughout the year, factors such as temperature, moisture and sunlight all contribute to the vibrancy of the colours.

‘A wet spring and a hot summer, followed by sunny autumn days and frosty nights, usually make for a dazzling leaf display.’

The science behind the colour wheel is that chlorophyll, the pigment that gives leaves their greenness, ebbs away as shorter days and cooler temperatures set in.

Other pigments — copper, amber and crimson — formerly masked by chlorophyll, start to shine through, boosted by surging sugar concentrations. When those nutrients have gone, the leaves drop.

North America would waltz off annually with gold in the leaf peeping Olympics — few destinations can conjure up the bewitching ‘fall’ foliage that Vermont or New Hampshire can — but Japan’s autumn, koyo, is a close rival. The country’s many sub-species of maple create a scarlet mosaic that endures until early December. 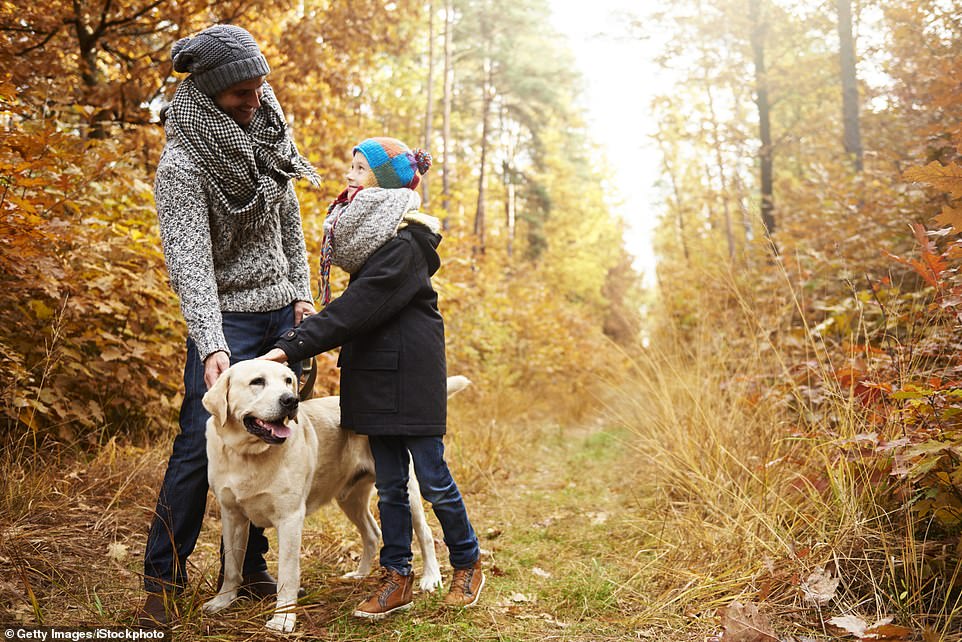 While Mother Nature brandishes a paintbrush over the northern hemisphere’s most beautiful woodlands, autumn is also the time when tour operators, hotels and airlines send prices falling along with the leaves

If only a shorter — and more affordable — break will do, Britain’s woodlands are just as soul-lifting, especially when days are bookended by a hearty breakfast and a cosy rural pub.

Around 13 per cent of our own land is covered by trees, with everything from orchards to medieval royal hunting forests and formal avenues, such as the soaring limes in London’s Regent’s Park.

Its cloak of green is already being shrugged off in favour of warmer hues, says Alan Power, head gardener at the National Trust’s 18th-century Stourhead estate in Wiltshire, who argues autumn is the best season to be among nature.

‘It’s my favourite time of year, and you can feel the change coming as early as late August,’ he adds.

‘At Stourhead, the yellow buckeye tree next to the Pantheon is usually the first to turn, followed by the red oaks, golden beeches, yellow tulip trees and a host of other species that create a vivid natural tapestry.’

The curtain is just about to rise on autumn 2019. Here are ten great holidays guaranteed to showcase the best of the season . . . 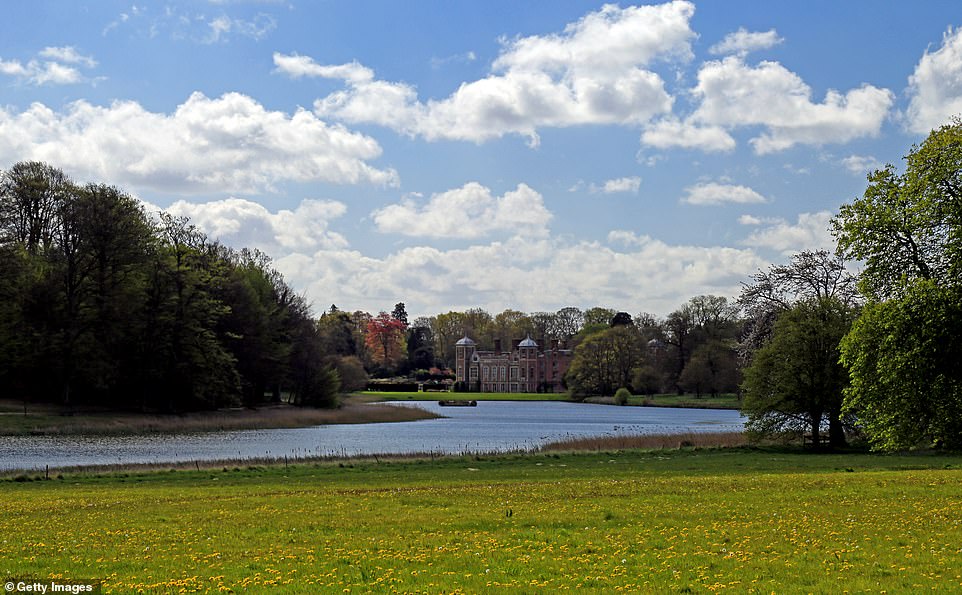 The handiwork of garden designer and socialite Norah Lindsay is the star turn at North Norfolk’s Jacobean Blickling Estate.

Amble through Lindsay’s formal gardens, designed in the Thirties, which frame the house where Anne Boleyn was born. For bolder colours, strike out for the fringing woods.

BOOK IT: Stay at The Tower, the Earl of Buckinghamshire’s former race stand, at Blickling for three nights from £809, based on four sharing (nationaltrust.org.uk/holidays, 0344 800 2070). 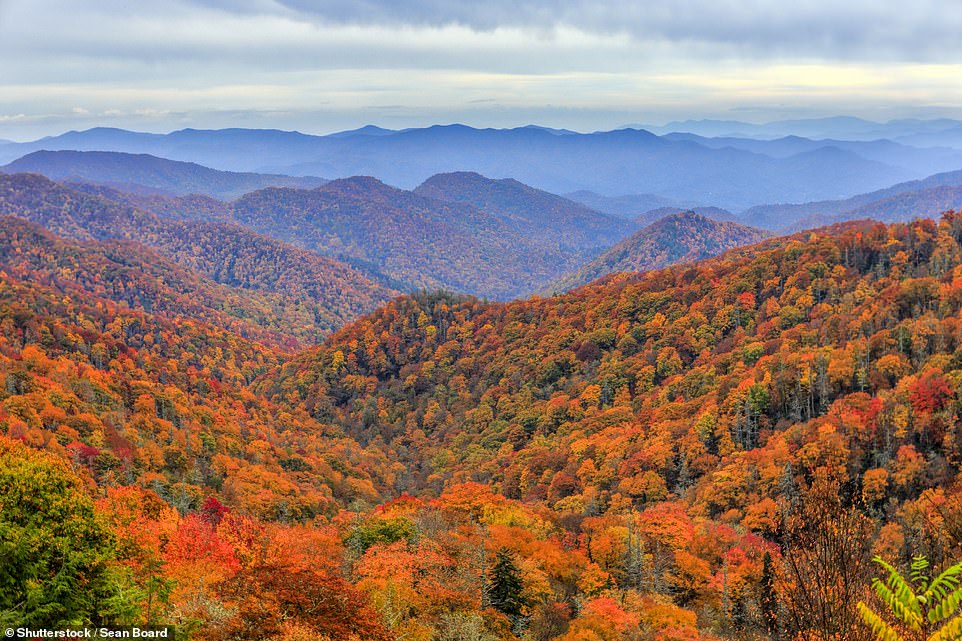 In the Great Smoky Mountains in America’s Deep South, there are among 100 varieties of native tree changing colour in the autumn

Hear the rustle of leaves underfoot — and the lilting sound of bluegrass music — in the Great Smoky Mountains in America’s Deep South, where hickories, sweet gums and scarlet oaks are among 100 varieties of native tree changing colour.

AUTUMN THRILLS: Hike under the sun-dappled tree canopies on the Oconaluftee River Trail in North Carolina.

BOOK IT: A week-long road trip in the Smoky Mountains costs from £1,295 pp with Vacations To America. Prices are based on two sharing and include flights, car hire and B&B accommodation (vacationstoamerica.com, 01582 469777). 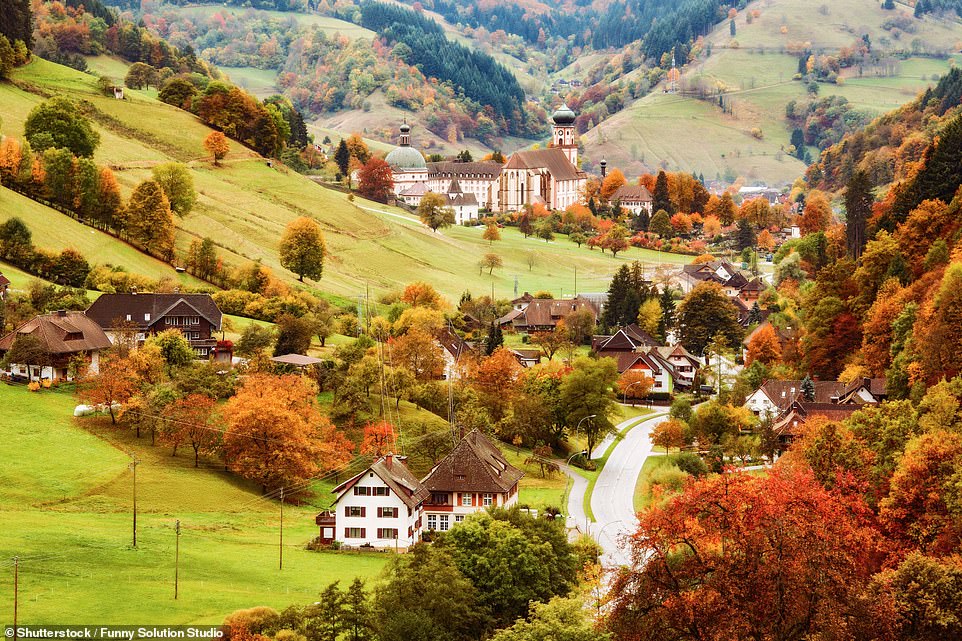 The Black Forest, pictured, is a 100-mile portion of southern Germany that inspired Grimms’ Fairy Tales

October is a mystical month in which explore Schwarzwald — or the Black Forest — the 100-mile portion of southern Germany that inspired Grimms’ Fairy Tales.

The deep-green firs look ever-more Christmassy against the fiery colours of their deciduous neighbours.

Wrap up for misty morning hikes, knowing that a slab of the region’s famous chocolate and cherry cake awaits in a kaffeehaus.

BOOK IT: Doubles with breakfast at Hotel Alemannenhof cost from £124 (hotel-alemannenhof.de). Flights to nearby Zurich from £80 return (swiss.com). 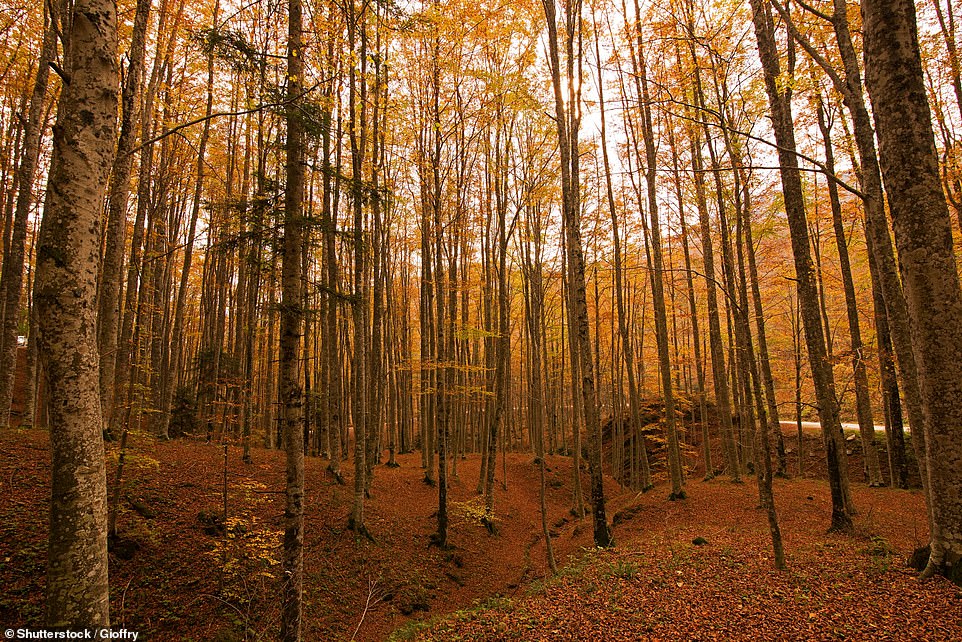 Flee Florence’s tourist crowds and make for Casentino Forest National Park, where you are competing for space only with oaks and chestnuts.

Carve a path through one of Europe’s largest woodlands and head up to Monte Penna in northern Italy for views of the colourful canopy as far as the eye can see.

BOOK IT: A three-night B&B break, departing on October 31, at the Renaissance Tuscany Il Ciocco costs £417 pp, based on two sharing a room and including Ryanair flights to Pisa (renaissancetuscany.com). 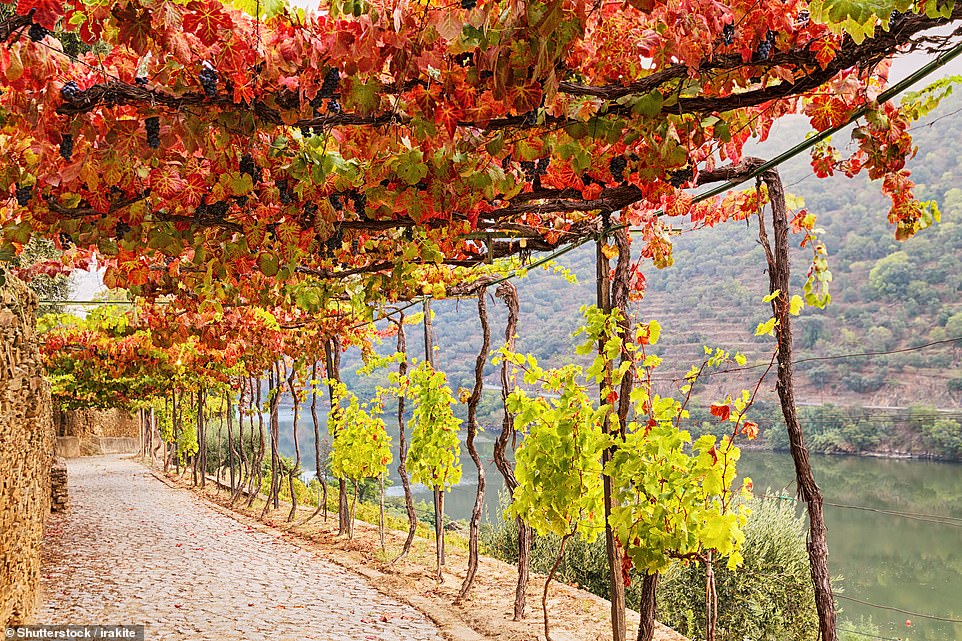 Portugal’s northerly Douro region, famous for its winelands, takes on a honeyed hue as autumn wanders in

Heaven-sent for photographers, the steep, ancient winelands in Portugal’s northerly Douro region take on a honeyed hue as autumn wanders in.

The weather is mild, and an electric bike (e-bike) is a great way to cover miles in these sloping lands, punctuated by remote villages and quintas, the port and wine estates.

AUTUMN THRILLS: Watch the Douro river winding between picturesque Régua and Pinhão on its journey to Spain.

BOOK IT: An e-bike tour of the Douro region with BSpoke Tours costs £1,185 pp, including cycle hire, transfers, hotel accommodation based on two sharing and flights (bspoketours.com, 020 3740 3966). 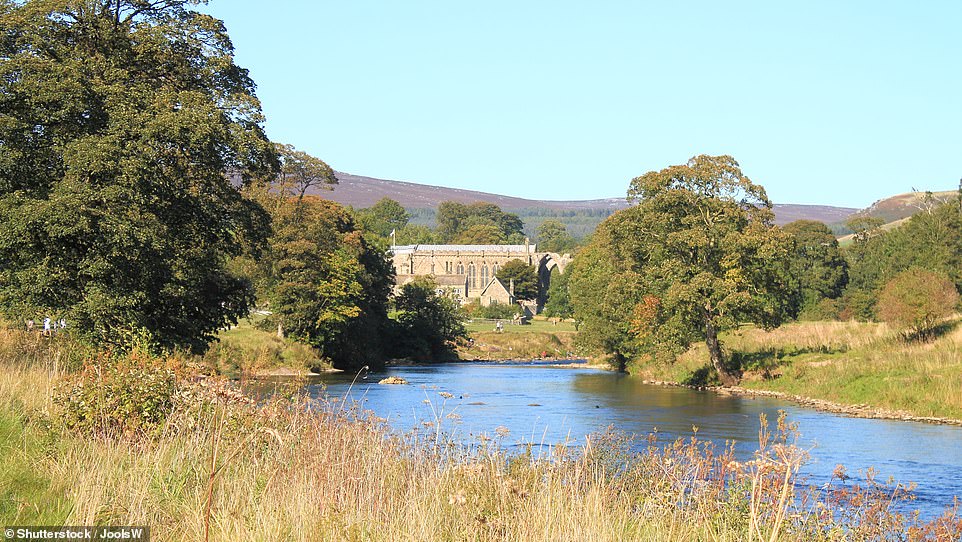 Bolton Abbey, in the heart of the Yorkshire Dales, has  30,000 acres of green — which becomes a mass of caramel brown at this time of year

Browse a map of Bolton Abbey, in the heart of the Yorkshire Dales, and you’ll see 30,000 acres of green — which becomes a mass of caramel brown at this time of year.

See the best of it from one of the 80 miles of footpaths crisscrossing this slice of God’s Own Country, taking time to see the 12th-century priory. 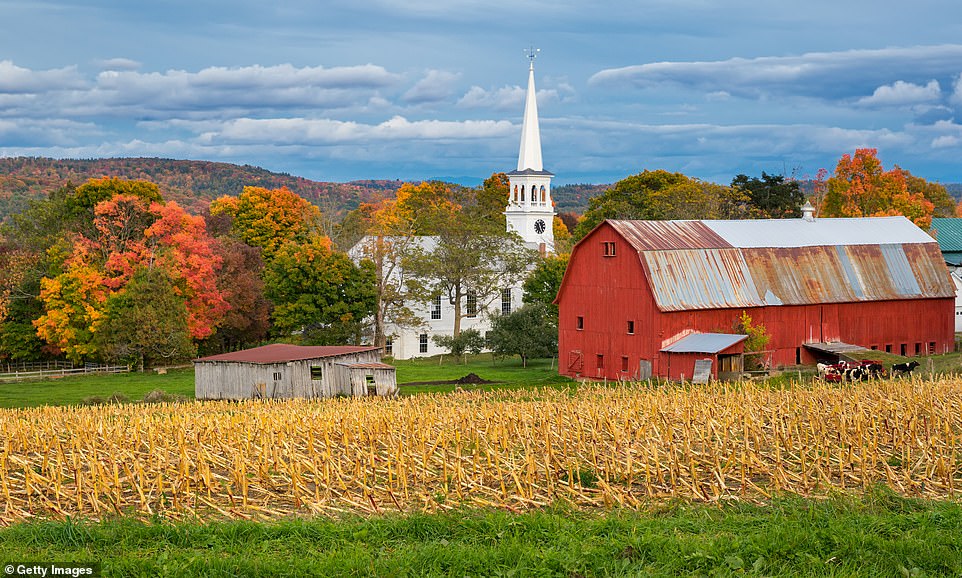 Pull on to Route 100 and watch Vermont’s Green Mountains belie their name as shades of amber and ochre drench the landscape.

This scenic 146-mile road courses through farm country and doubles up as an artisan food tour: pick up craft beer, grass-fed beef and raw honey at pretty pit-stops.

BOOK IT: A seven-night stay in Vermont costs from £1,323 pp, including flights, hotels in four locations and car hire, based on two adults sharing and October departures (americaasyoulikeit.com, 020 8742 8299). 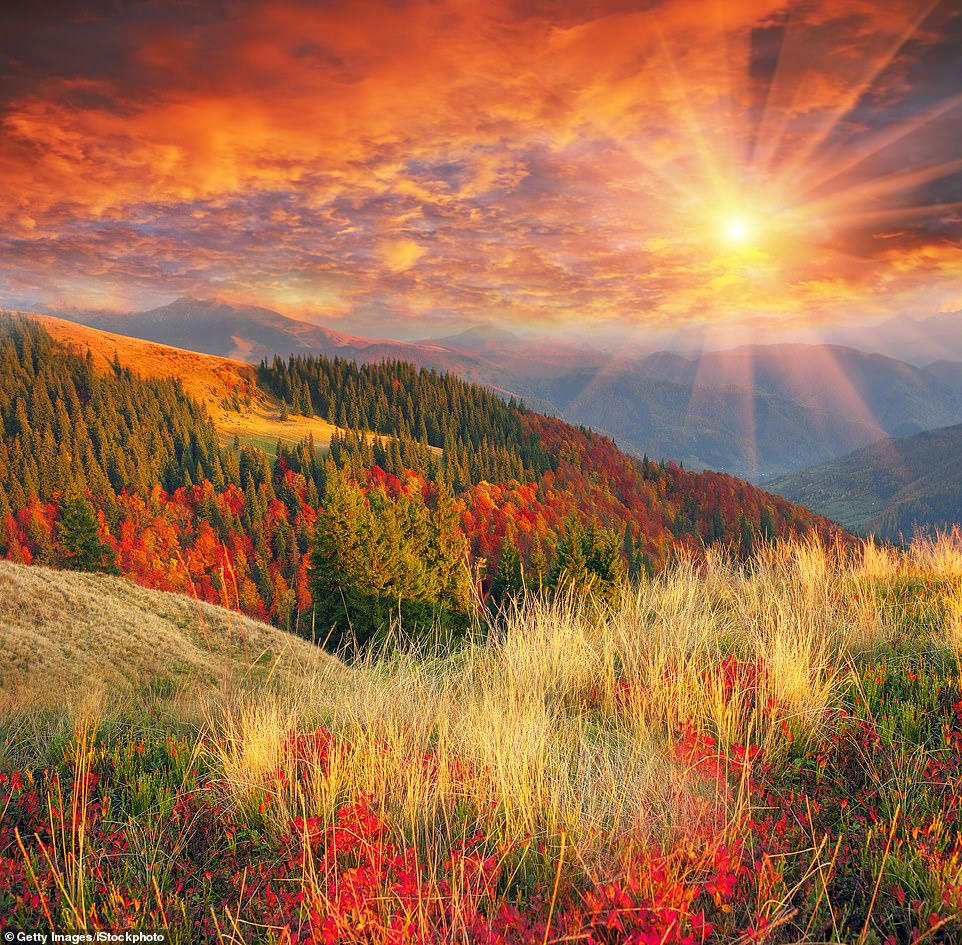 The forested southern Carpathian Mountains, pictured, are soon to be seen in sublime shades of sienna

That autumn coincides with Halloween makes a jaunt to Transylvania twice as fun.

Bran Castle, the inspiration for Dracula’s creepy abode, is in the heart of the forested southern Carpathian Mountains, soon to be seen in sublime shades of sienna. (Side-note: Prince Charles loves these peaks so much he has a home here.)

BOOK IT: Riviera Travel offers a five-night escorted tour of Transylvania and Bucharest from £769 pp, based on October 2020 departures, including flights, transfers and four- star accommodation (rivieratravel.co.uk, 01283 245322). 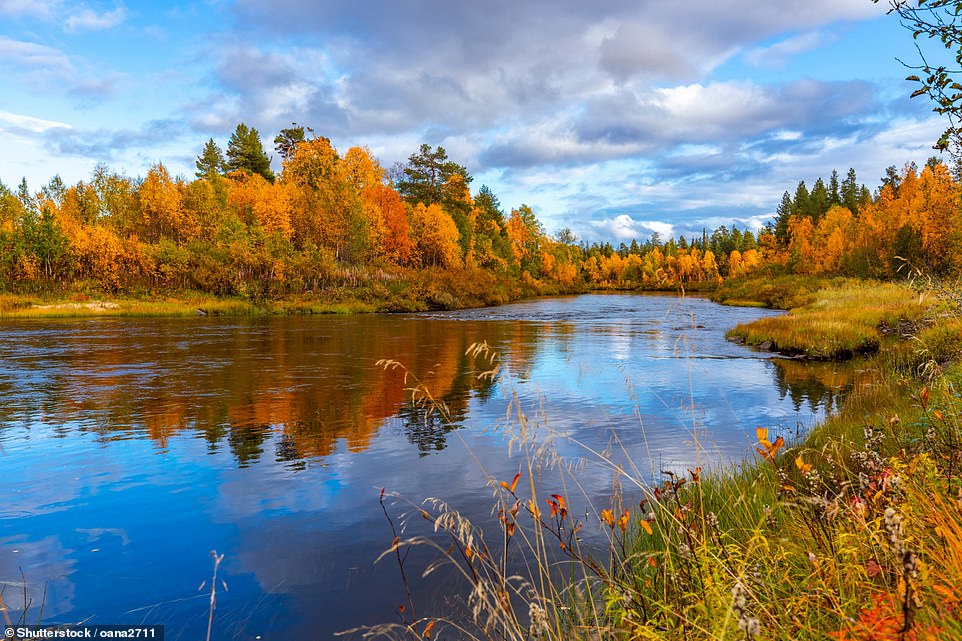 Finland in autumn is known by the indigenous Sami people as ruska. It sees silver birches adorned with gold leaves and bright red lingonberries — a Finnish favourite — on the woodland floor

Banish thoughts of Old St Nick and piles of snow — try Finland in autumn instead.

Known by the indigenous Sami people as ruska, this short period sees silver birches adorned with gold leaves and bright red lingonberries — a Finnish favourite — on the woodland floor.

Expect big blue skies, crisp weather and even a light show from the Aurora Borealis, or Northern Lights.

AUTUMN THRILLS: Board a boat on Lake Inari and enjoy ruska from the water

BOOK IT: A four-night, full-board stay in the Wilderness Hotel Inari including activities, flights and transfers costs £1,395 pp based on departures until November 15, (theaurorazone.com, 01670 785012). 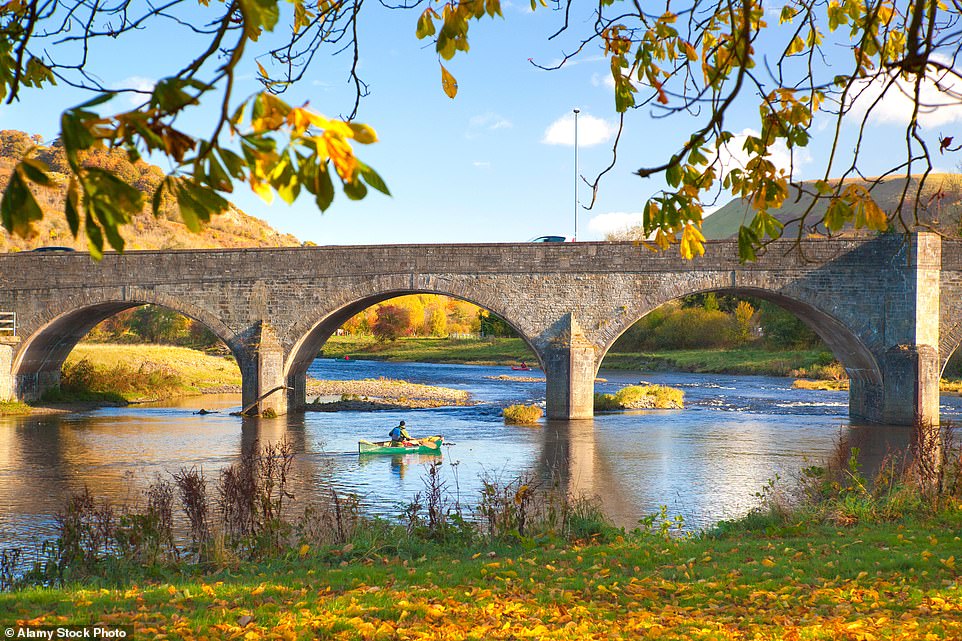 Foliage fans in the Forest of Dean, Gloucestershire, and the Wye Valley, which straddles the border between England and Wales — have devised an official ten-mile leaf-peeping drive. Pictured is the River Wye

Foliage fans in the Forest of Dean, Gloucestershire, and the Wye Valley, which straddles the border between England and Wales — have devised an official ten-mile leaf-peeping drive that promises to signpost the biggest photo opportunities.

A soggy June, say the experts, means colours will be especially strong in this tree-lover’s paradise, which has 20 million mixed species over 200 square miles.

BOOK IT: A two-night stay in Wharton Lodge Cottages, near Ross-on-Wye, Herefordshire, starts from £390, based on two sharing (leafpeeperscottages.co.uk, 01989 750140).