The best fine-dining restaurants have been named by Tripadvisor, with The Old Stamp House Restaurant in the Lake District rated number one in the UK and the world for the second year running.

The Michelin-starred Cumbrian eatery has been awarded the accolade as part of Tripadvisor’s 2022 Travellers’ Choice ‘Best of the Best’ Restaurants Awards, which are decided by an algorithm that analyses the millions of reviews and ratings collected in a year from travellers around the world.

Oro Restaurante in Rio de Janeiro, Brazil, is the second-best restaurant in the global ranking, followed by Madonnina del Pescatore in the Italian seaside town of Senigallia. Number one in America is Lahaina Grill in Maui, Hawaii, which ranks 19th overall, and Wild Harvest in Tasmania is Australia’s top-ranking fine-dining restaurant, though no Australian restaurants make the global top 25.

The Old Stamp House Restaurant (above) in the Lake District is the number-one-rated fine-dining restaurant in the UK and the world for the second year running, earning the accolade as part of Tripadvisor’s 2022 Travellers’ Choice ‘Best of the Best’ Restaurants Awards 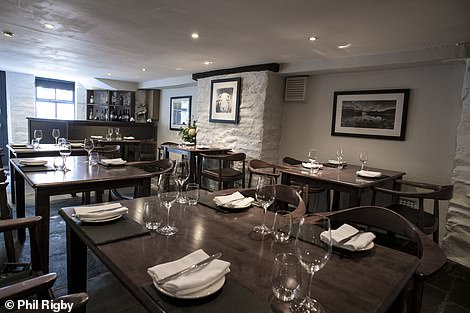 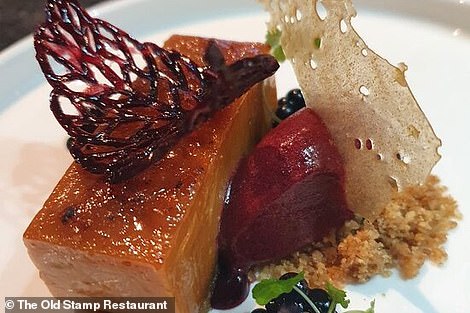 The Old Stamp House Restaurant serves dishes that give a ‘unique glimpse into the food and cultural heritage of Cumbria’. On the right is an artfully presented dish at the restaurant

The gold-medal-winning Old Stamp Restaurant, which lies in the picturesque town of Ambleside, is housed in the former office of the Romantic poet William Wordsworth.

With head chef Ryan Blackburn at the helm, the 28-cover restaurant serves dishes that give a ‘unique glimpse into the food and cultural heritage of Cumbria’. A tasting menu might feature tomatoes from the north of Cumbria, mushrooms found in the woods around Ambleside, and turbot from the English Channel.

It has rave reviews – Tripadvisor user ‘Mull2345’, who visited this month, wrote: ‘Exquisite food and wine flight to match. Give this place another star!’ Another recent reviewer described the food as ‘culinary wizardry’.

Blackburn – who is also chef patron of the nearby restaurant Kysty, which was named the UK’s fifth-best date spot in the awards – commented: ‘It’s incredible that we’ve been recognised with the Travellers’ Choice Awards from Tripadvisor for Best in the World, Best in Europe and Best in the UK, based on community reviews, for the second year in a row, as well as being listed fifth in the UK for Kysty in the Date Night category, an improvement of two places on last year. 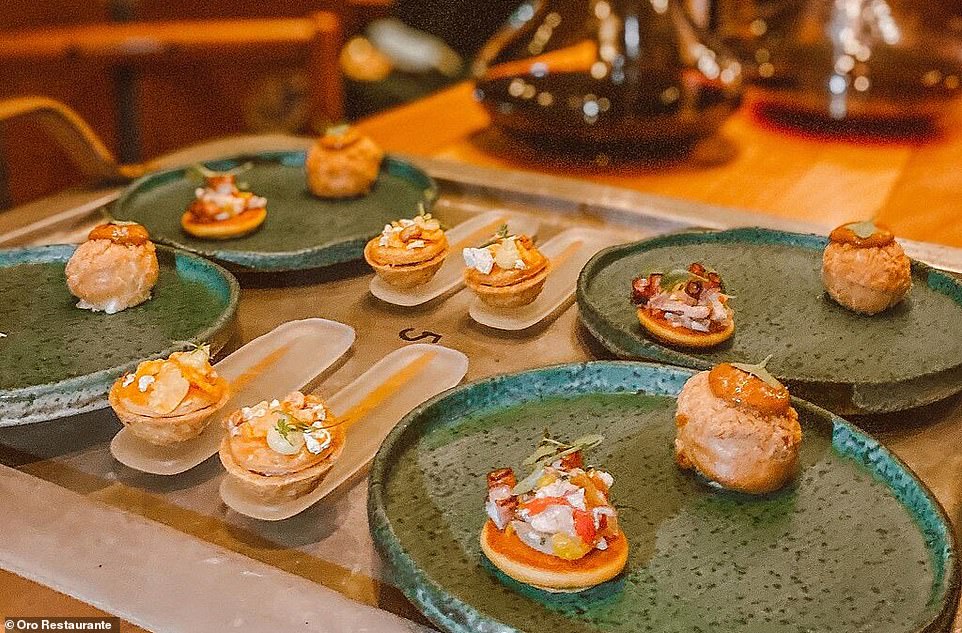 Oro Restaurante in Rio de Janeiro, Brazil, is the second-best restaurant in the global ranking 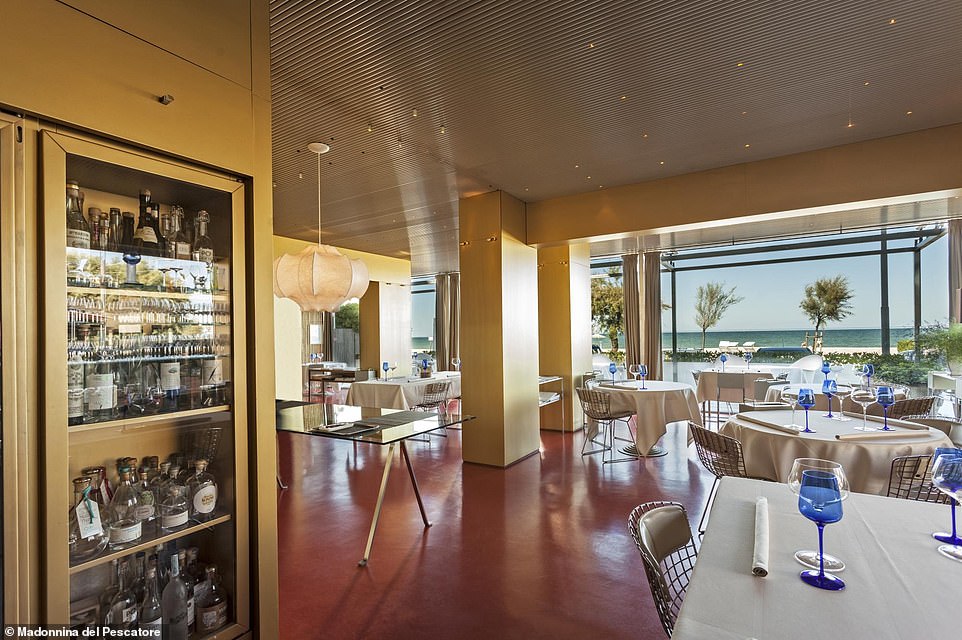 Madonnina del Pescatore in the Italian seaside town of Senigallia, pictured, is third worldwide. ‘Fish lovers need to try this place at least once,’ a recent review reads 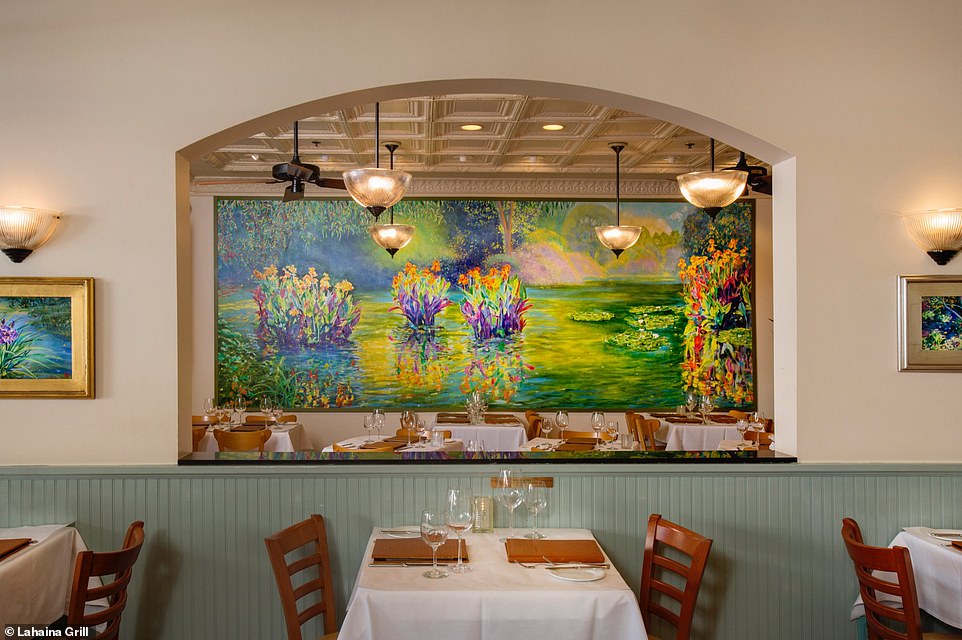 Number one in America in the fine-dining ranking is Lahaina Grill in Maui, Hawaii, which ranks 19th overall. Its menu revolves around the ‘freshest ingredients cultivated by Maui’s local farms, dairies and surrounding waters’ 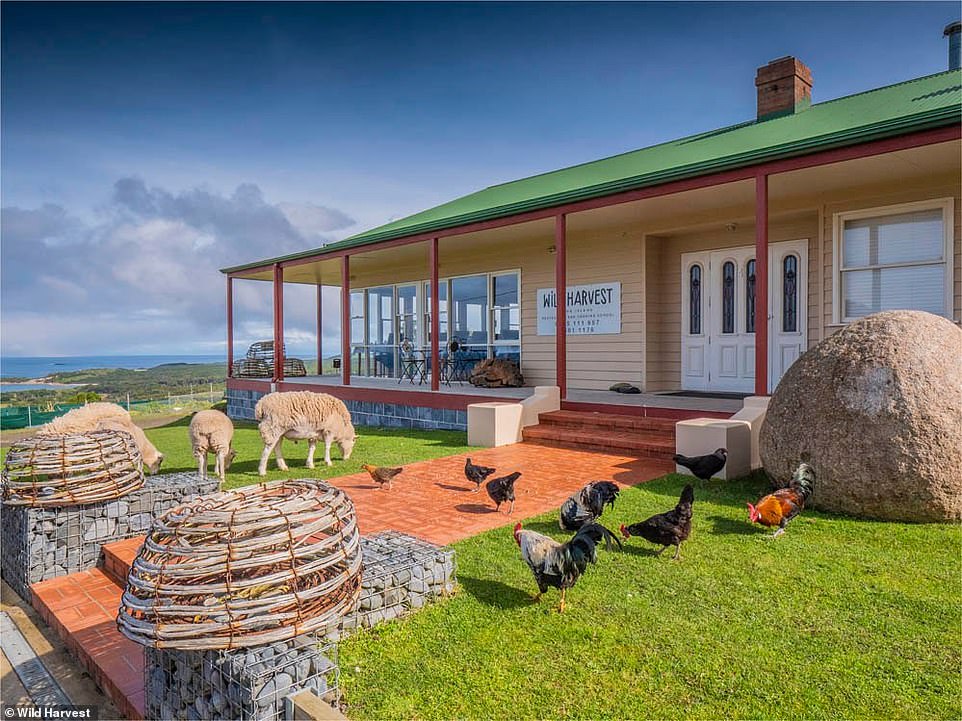 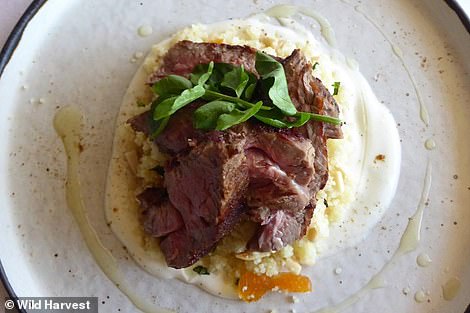 Wild Harvest has a ‘paddock to plate’ philosophy

‘Both teams constantly listen to what our guests have to say and the feedback they give us helps us deliver consistency and excellence across every aspect of what we do. Both restaurant teams are a little bit lost for words and just want to say thank you to the wonderful guests that have taken the time and trouble to help us continue to develop and improve as both evolve.’

Second-place Oro Restaurante, meanwhile, plates up cuisine that’s a ‘fusion of Brazilian roots and cutting-edge gastronomy’, according to the Michelin Guide, while bronze-medal-winner Madonnina del Pescatore offers diners views of the Adriatic Sea and a menu that’s rich in seafood to match. ‘Fish lovers need to try this place at least once,’ a recent review of the latter reads.

Two Spanish eateries make up the rest of the top five – the French-inspired, three-Michelin-starred restaurant Martin Berasategui (fourth) in the town of Lasarte-Oria in the north of the country, and El Xato (fifth) in Alicante, which has been running for over 100 years and specialises in contemporary Mediterranean cuisine. 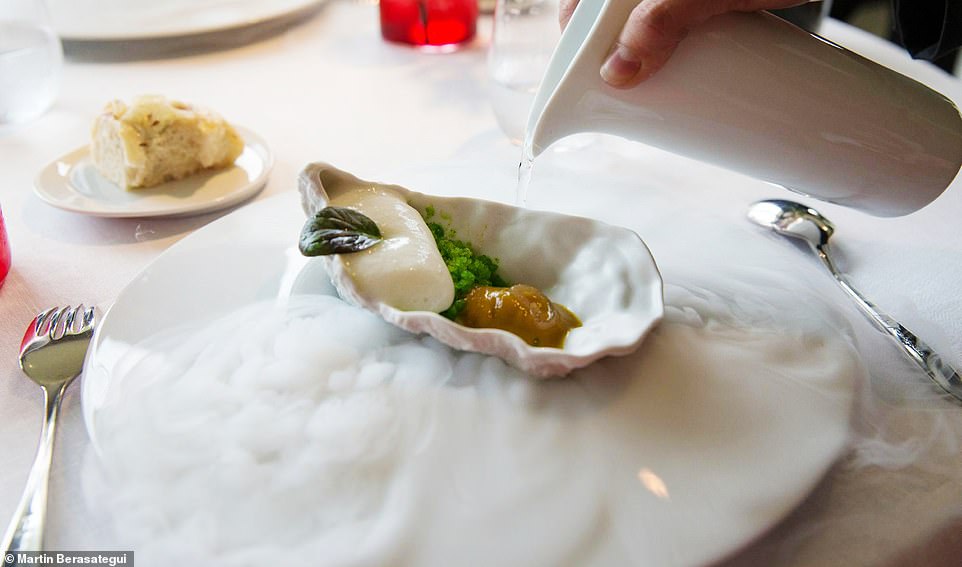 The French-inspired, three-Michelin-starred restaurant Martin Berasategui (fourth) in the town of Lasarte-Oria in the north of Spain is fourth overall 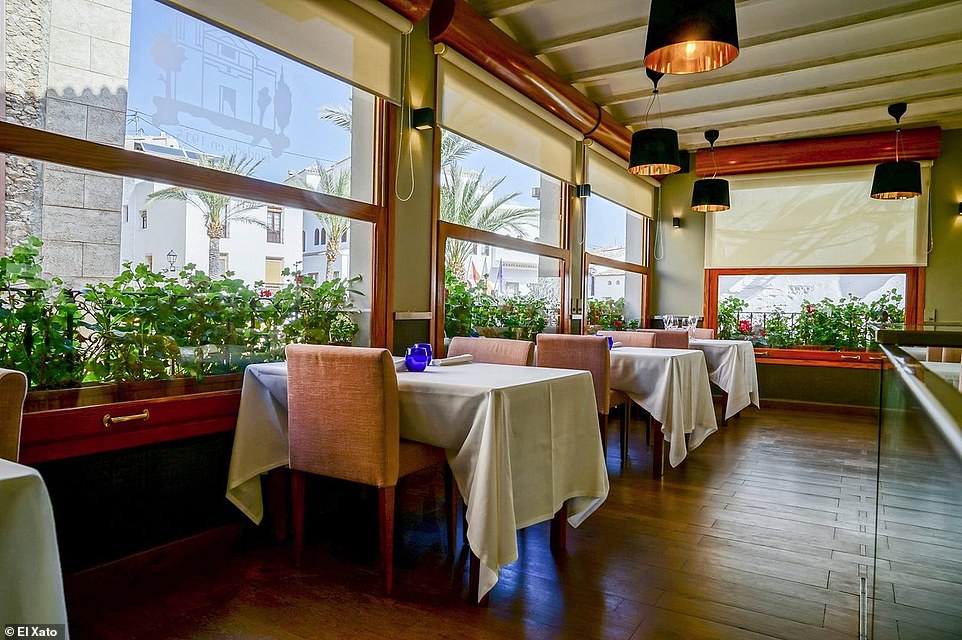 El Xato in Alicante, which has been running for over 100 years and specialises in contemporary Mediterranean cuisine, ranks fifth globally

As for the UK fine-dining ranking, The Old Stamp Restaurant is followed by Paul Ainsworth at No. 6, a restaurant in Padstow, Cornwall, that presents ‘modern British’ fare.

Hide and Fox in Kent – a ‘hidden gem’, according to a recent review – is third; London’s Frog By Adam Handling, where guests can expect a ‘theatrical dining experience’, is fourth; and the ‘fabulous’ Olive Tree in Bath is fifth.

In the U.S ranking, first-place Lahaina Grill offers a menu that revolves around the ‘freshest ingredients cultivated by Maui’s local farms, dairies and surrounding waters’. It’s followed by The Restaurant at Gideon Ridge (second) in North Carolina, where an outdoor terrace offers stunning views of the Blue Ridge Mountains, and the ‘outstanding’ Lincoln Inn & Restaurant At The Covered Bridge (third) in Woodstock, Vermont.

Family-owned Cafe Monarch in Scottsdale, Arizona, is fourth in the U.S, while Halls Chophouse – a fine-dining restaurant that’s known for its steaks – in Charleston, South Carolina, is fifth.

Set on rugged King Island, Australia’s number one fine-dining restaurant Wild Harvest has an ‘ocean to table’ and ‘paddock to plate’ philosophy, with menus that include local scallops and ‘Wild Harvest-raised’ pork sausage.

2. Paul Ainsworth at No. 6, Padstow, Cornwall

9. Dean Banks At The Pompadour, Edinburgh

3. The Lincoln Inn & Restaurant At The Covered Bridge, Woodstock, Vermont 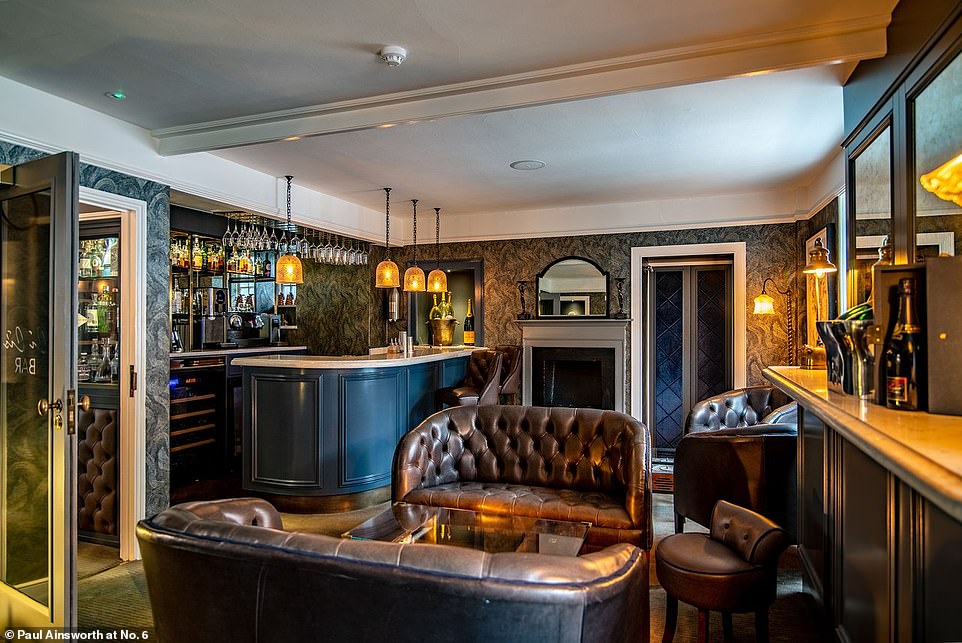 Paul Ainsworth at No. 6, a restaurant set in the Cornish fishing town of Padstow, is second in the UK fine-dining ranking 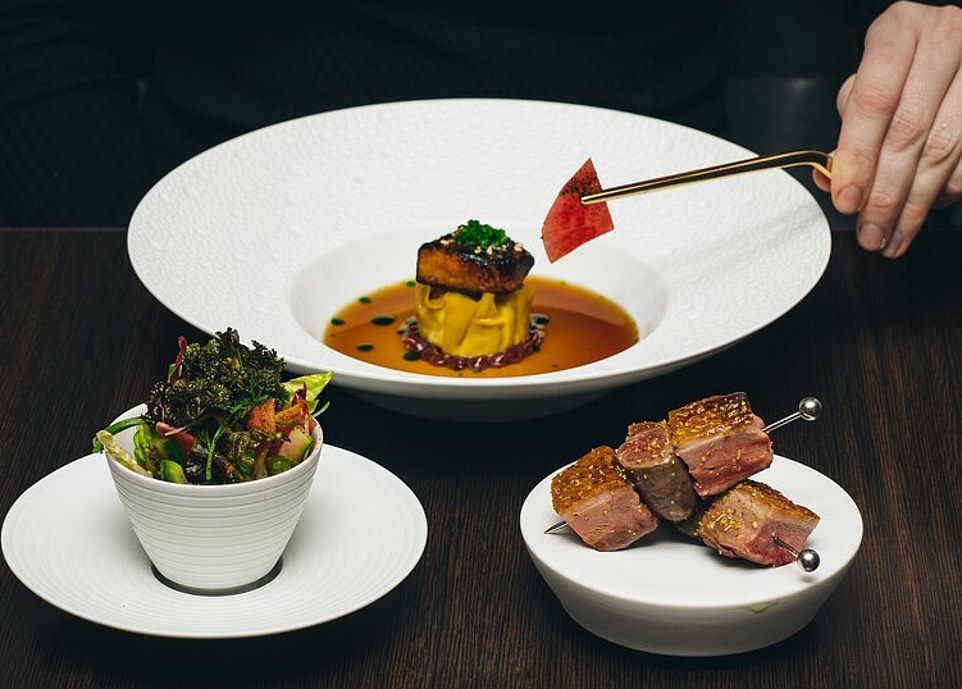 Paul Ainsworth at No. 6 presents diners with ‘modern British’ fare, pictured above 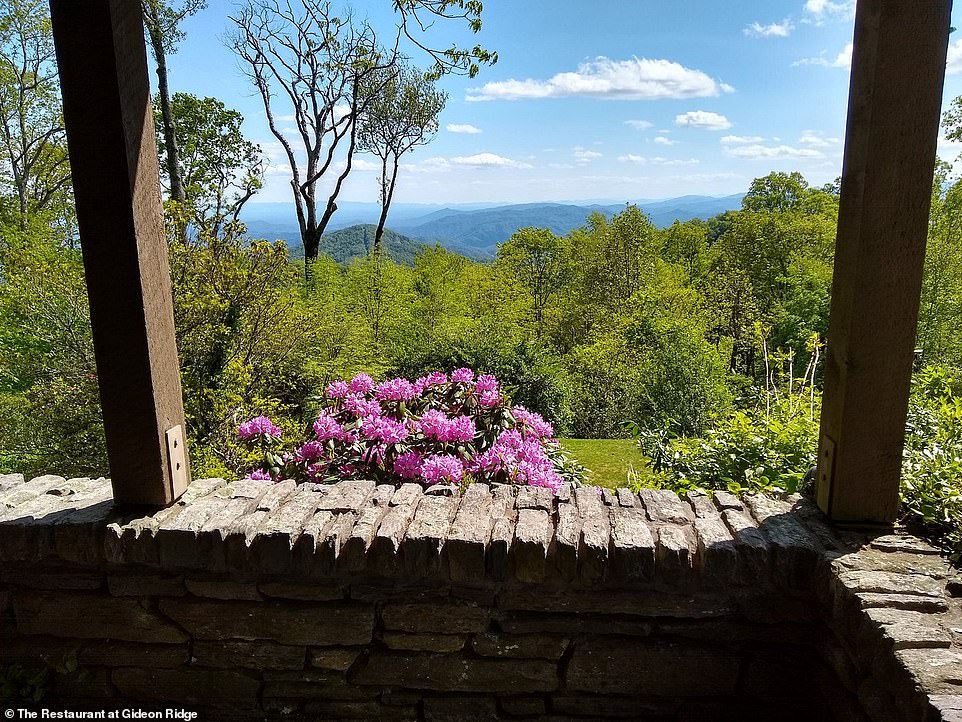 The Restaurant at Gideon Ridge in North Carolina is second in the U.S fine-dining ranking and has been named the best date night spot in the U.S. Its outdoor terrace offers stunning views of the Blue Ridge Mountains 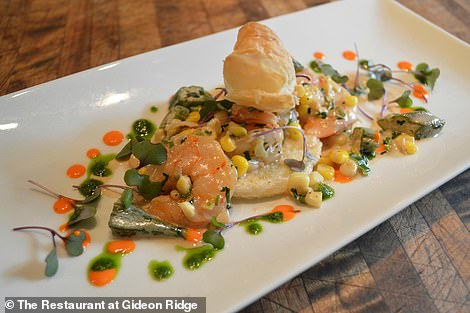 A dish at The Restaurant at Gideon Ridge

The ‘dark, moody and intimate’ EXP Restaurant in New South Wales lands second place in the ranking and the rest of the top five comprises Melaleuca (third), a restaurant run by a husband-and-wife team in Queensland; the ‘relaxed’ Charred Kitchen & Bar (fourth) in New South Wales; and Sokyo (fifth), an ‘elegant’ Japanese eatery in Sydney.

Brand-new category ‘Hidden Gems’ showcases the ‘lesser-known spots and places locals love’, with Green Point, – a ‘plant-based culinary experience’ that will ‘impress vegans and meat eaters alike’ – in Cusco, Peru, taking the top spot worldwide. The number one ‘Hidden Gem’ in the UK, meanwhile, is La Fiesta Restaurant in Doncaster, Yorkshire. Tripadvisor reviewers praise the restaurant for its all-you-can-eat tapas option and ‘great’ atmosphere. Elsewhere, Joe’s At The Jepson in Savannah, Georgia, is top in the U.S and The Currant Shed in Greater Adelaide reigns supreme in Australia.

BEST QUICK BITES IN THE U.S 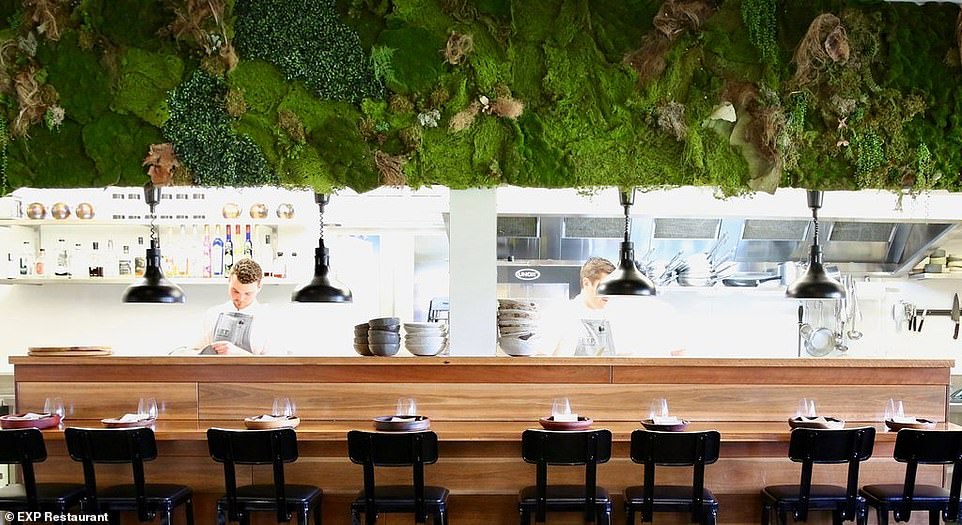 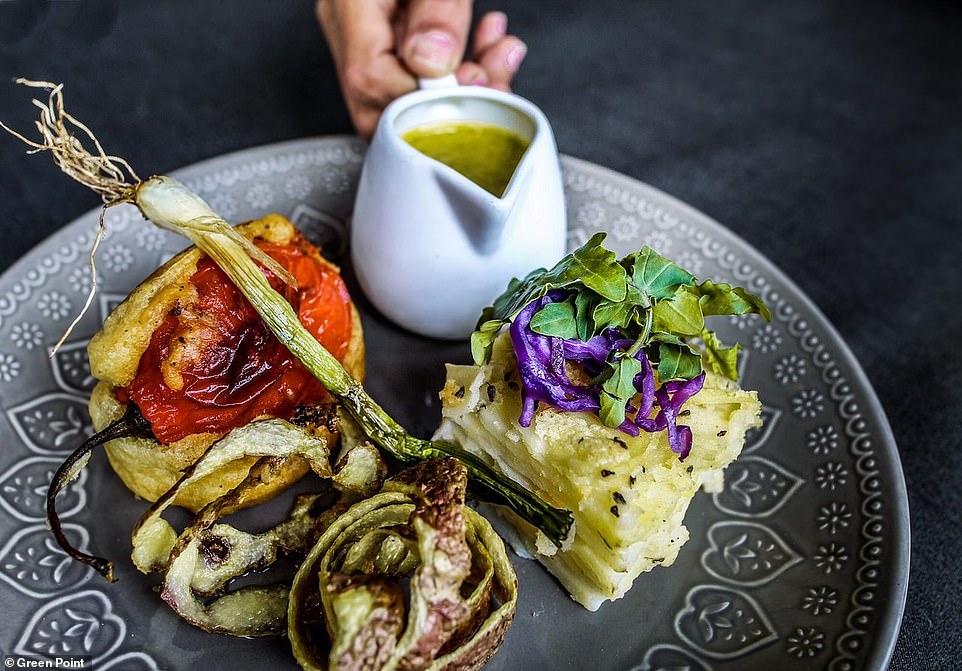 Enjoy plant-based food at Green Point in Cusco, Peru, a restaurant that takes the top spot worldwide in the Hidden Gems category 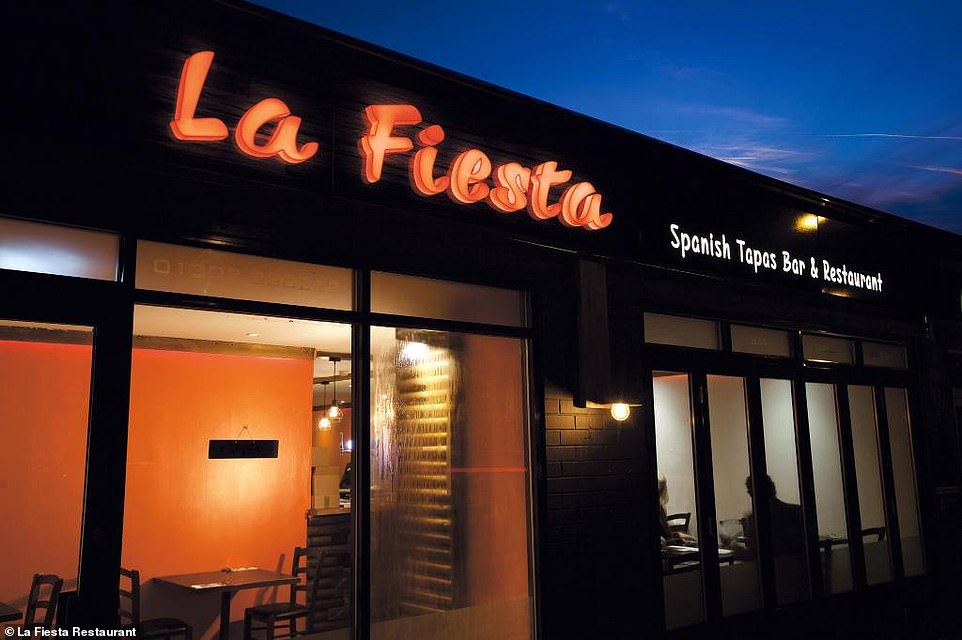 Tripadvisor reviewers praise La Fiesta Restaurant in Doncaster for its all-you-can-eat tapas option. The eatery is the number one ‘Hidden Gem’ in the UK

In the Date Night category, Altto Ristorante & Lounge Bar in the Brazilian resort town of Armacao dos Buzios has been crowned the most romantic restaurant in the world for 2022. ‘With a breathtaking view of the Bay of Armacao and [an] unparalleled gastronomic experience, it’s clear why couples love dining here,’ says Tripadvisor. Salamander Restaurant, which lies in the picturesque Cornish fishing village of Mevagissey, has been branded the best spot for a romantic meal in the UK, The Restaurant at Gideon Ridge scoops up another accolade as the best date night spot in the U.S and Watergate Restaurant & Lounge Bar in Queensland is top in Australia.

The Picture Perfect category is the one no doubt most keenly noted by snap-happy foodies – and this year’s winner, we can reveal is last year’s No.14 – Sunset Monalisa, in Cabo San Lucas, Mexico. ‘You will experience a cracking sunset here, topped off with the sound of waves crashing while you eat,’ says Tripadvisor.

There’s no global winner in the Everyday Eats category, but Edinburgh’s Makars Gourmet Mash Bar – a restaurant that serves up nine variations of mash potato including chilli mash, smoked bacon and spring onion mash and black pudding mash, as well as a variety of classic Scottish dishes – is top in the UK. Meanwhile, Timber Kitchen and Bar in the city of Bangor, Maine, is number one in the U.S and Bella Venezia Restaurant and Bar in Queensland leads the pack in Australia. 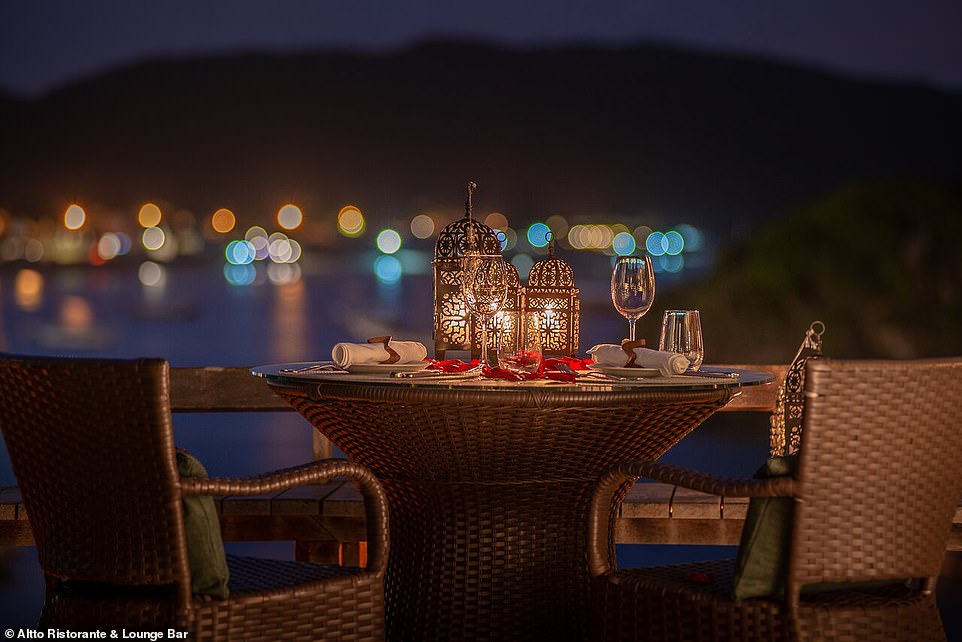 In the Date Night category, Altto Ristorante & Lounge Bar (above) in the Brazilian resort town of Armacao dos Buzios has been crowned the most romantic restaurant in the world for 2022 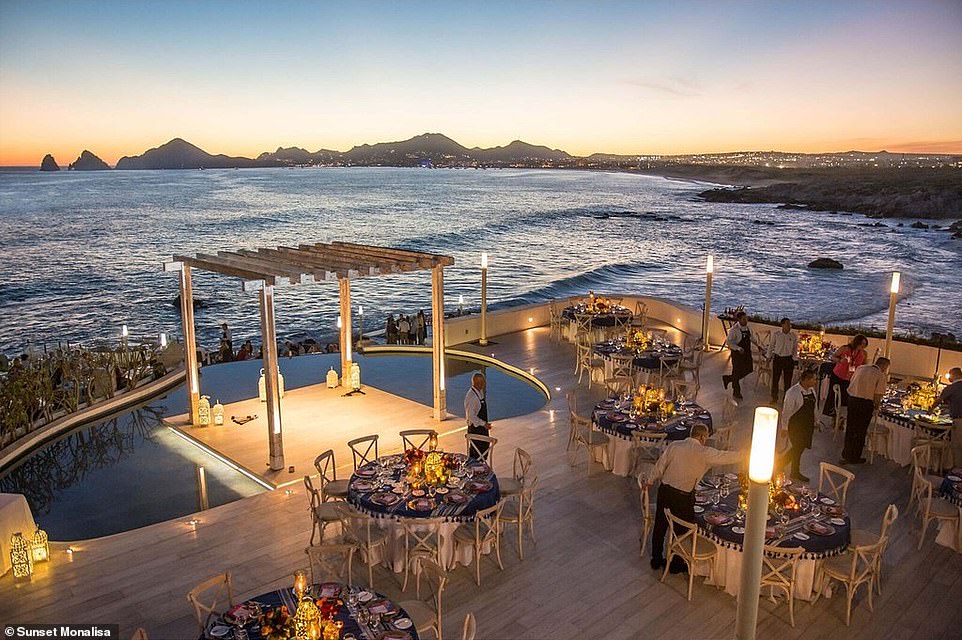 Commenting on the awards, Lauren Murphy, Vice President and General Manager of Hospitality Solutions at Tripadvisor, says: ‘Dining out is an internationally beloved pastime: for many restaurant-goers, it’s frequenting their favourite neighbourhood eatery and for others, it’s snagging a table at a top-rated restaurant on holiday. More than half of consumers in a recent survey told us that food is the most exciting component of their trip.

‘Like searching through a big menu for the perfect meal, recommendations can be helpful in decision-making, and our community’s guidance makes choosing from the wide array of restaurants easier. Tripadvisor’s Travellers’ Choice Awards, decided by people who visited and reviewed these places in the past year, offers authentic recommendations for the best places to eat no matter the occasion!’

For more on the ranking, visit tripadvisor.co.uk/TravellersChoice-Restaurants.