Holidaymakers heading abroad this summer are in luck as prices are down by as much as £750 when compared to last year, new data has revealed.

Offering a ray of hope to those watching worriedly as the pound has slid, the average cost of a family holiday has dropped by £76, with six out of ten popular holiday hotspots seeing a reduction in price over the last year, according to research by M&S Bank.

Sunny Beach in Bulgaria remains the cheapest location for families, staying at the top of the table for the fourth year running.

A week long holiday for a family of four on the Black Sea coast will cost just £2,596, equivalent to £649 per person this summer, down 17 per cent from last year.

M&S Bank analysed holiday costs for a family of four for one week, including seven nights accommodation, flights, dinner, spending money and one activity in 10 of the most popular holiday destinations.

All flights and accommodation were booked from Saturday 27th July to Saturday 3rd August 2019 and compared to prices for the same dates for a year prior.

The decline in cost comes despite the pound’s slide against major currencies as fears of a no-deal Brexit grow. Sterling has dropped from almost €1.18 at the end of April to €1.11 today, having climbed slightly  from recent lows earlier this week.

However, the pound is only slightly lower than its level against the euro at this time last year, when it stood at just over €1.12.

All flights represent the cheapest direct flight cost (wherever possible) from Skyscanner, departing from any London airport. Accommodation costs are based on the most affordable three-star option for a family room from Expedia.

Meal costs are sourced from Numbeo for the nearest available city and represent basic dinner out in the neighbourhood.

The research found that the Algarve in Portugal is offering the biggest overall saving this year, making it the second best value destination.

Antalya in Turkey followed closely behind, reaching third position for the most affordable destinations – costing £3,072 for a family of four or £768 per person.

Bulgaria and Turkey benefit from both affordable accommodation and low-cost options for eating out.

Although accommodation and dining costs are higher in Portugal, this is offset to an extent by cheaper flights.

Holidaymakers can also find themselves big savings in Zakynthos, Greece which has seen a year on year reduction of 13 per cent, whilst tourists heading to Dordogne in France will also benefit from a fall of 11 per cent.

Conversely, Toronto has seen the biggest year on year increase, coming in at a massive £862 more expensive than in 2018 – a rise of 21 per cent.

Any families looking to head to the Canadian city will be paying £5,076, the equivalent of £1,269 per person.

The popular family resort of Orlando comes in just slightly cheaper at £4,792, or £1,198 per person, equivalent to an increase of 19 per cent in comparison to last year.

Dubai is the third most expensive destination at £3,576 for a family trip – despite being the fourth cheapest option last year. 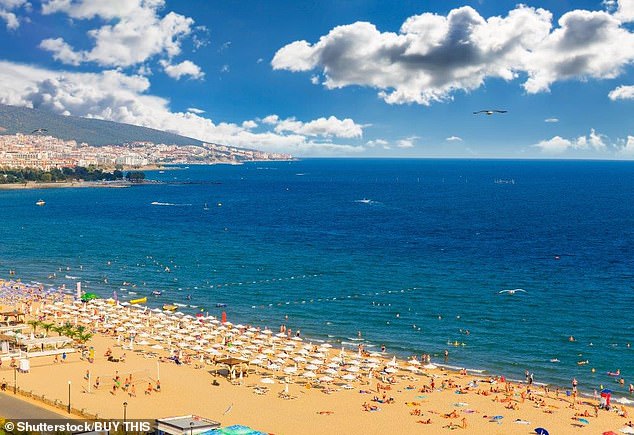 Croatia has recently seen a growth in popularity which could explain why prices are up 0.7 per cent on last year, making it the fourth priciest location.

Rising flight costs have been largely to blame for the increase in price to transatlantic destinations.

Flights to Orlando and Toronto now cost £2,759 and £2,874, respectively, which would cost Britons more than the total cost of a family holiday to Sunny Beach.

Other costs have also contributed to the high price of the most expensive locations as the USA, Canada and UAE are the destinations that have the highest cost for eating out.

Paul Stokes, head of products at M&S Bank said: ‘It’s great to see that the majority of holiday destinations we looked at were in fact cheaper than this time last year, meaning that with a little research, holidaymakers could make their money go much further.

‘To make the most of their budget, we would also encourage holidaymakers to compare local costs before they go away.’

Top tips to save on holidays

M&S Bank have revealed their top tips to help holidaymakers save when booking their vacations this year.

• Try to be flexible with flight times – an indirect, night or weekday flight could all prove cheaper

• Always set a budget and remember to factor in travel money for snacks, excursions, taxis, tips and other costs, even if you are travelling half-board or all-inclusive

• Research to find out if buying tickets in advance and online, such as attraction passes, is any cheaper than waiting until you arrive

• Don’t leave your holiday money until the last minute; airport bureaux often offer less competitive rates and may not have a wide variety of note denominations