‘We’re rooting for you Peter Kay’: Fans express concern as comic returns to screens on Big Night In after taking time off for ‘unforeseen family circumstances’ but appears ‘less than 100%’

Viewers have expressed concerns Peter Kay is ‘not well’ after his appearance on the BBC’s The Big Night In coronavirus fundraiser.

The comedian, 46, appeared in a clip from his Bolton home to introduce his classic Comic Relief track Is This The Way to Amarillo.

But fans claimed he looked ‘far from 100 per cent’, despite his colourful shirt, sunhat and sunglasses.

Kay cancelled a tour in 2017 and has rarely been seen in public since. He was last on TV in 2018 when he appeared in two special episodes of Car Share. 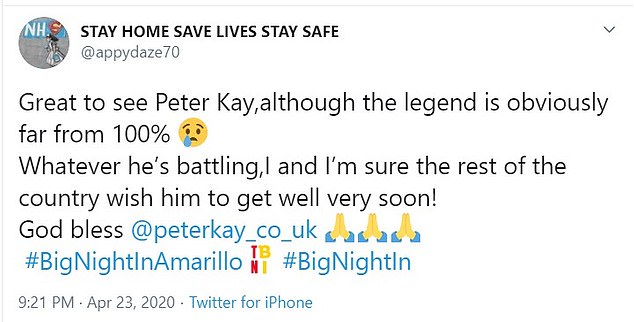 He said this evening: ‘Hello everybody. I’m just sitting outside enjoying the ratgher clement weather, which is rare for Bolton.

‘Fifteen years ago I did a sketch for Comic Relief. I never imagined that it would go down so well and make everybody happy, and I thought what a perfect time to recreate it again, so I’ve asked a lot of you to film yourself and send it in’.

Kay ended his message saying ‘take care and enjoy yourselves lots of love to you all’.

The Big Night in then showed people up and down the country joining in and miming to the Tony Christie song.

Someone else wrote: ‘Peter Kay didn’t look or sound well on the Tele then didn’t he. Sad to see! #BigNightIn’

Another fan commented: ‘Great to see Peter Kay, although the legend is obviously far from 100%

‘Whatever he’s battling,I and I’m sure the rest of the country wish him to get well very soon! God bless.’

Someone else asked: ‘Anyone else worried about Peter Kay. Great to see him, but something didn’t seem right #BigNightIn.’ 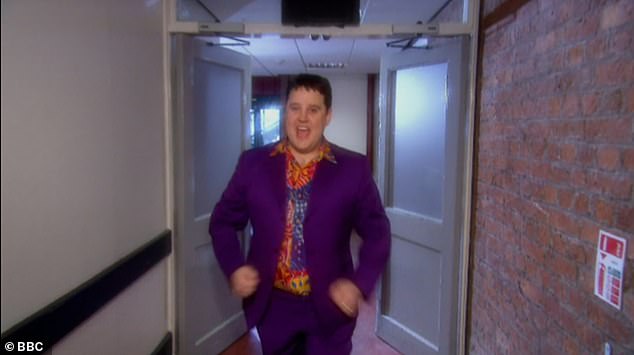