A glamorous woman dubbed ‘One Shot’ who was known for crocodile hunting with flashy red fingernails shot the largest reptile ever caught in Australia.

Krystyna ‘Krys’ Pawlowski rose to fame in 1955 when a massive saltwater crocodile came creeping towards her three-year-old daughter Barbara in Karumba in Queensland’s Gulf Country.

‘My brother came out and saw it and yelled “Barbara, crocodile!” and my parents grabbed a rifle and shot it square between the eyes,’ Krys’s son George Pawlowski told Daily Mail Australia.

The Polish immigrants, who had been struggling to get by, realised they’d struck gold.

Pictured: The 8.6-metre saltwater crocodile believed to be shot by Krystyna and Ron Pawlowski in 1955 at the Norman River, Karumba 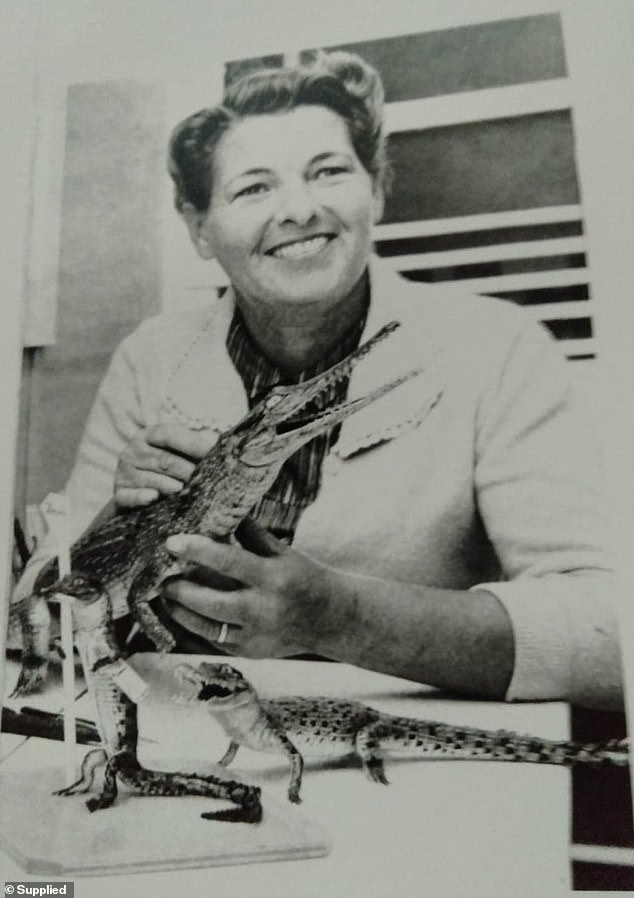 ‘When we shot that croc, it was hard to make a living, but we knew crocodile skins went for a lot’ Mr Pawlowski said.

‘An old-timer in the town helped us skin the crocodile and we sent it off to a dealer in Brisbane and finished off getting 10 quid for it.

‘In those days 13 quid was the basic wage, so Dad (Ron Pawlowski) thought we were on to something.’

Despite having never shot a rifle prior to immigrating to Australia, the petite 5’4″ woman quickly gained a reputation for being able to take a beast down in one move.

Legend had it the mother-of-three only missed three shots in her life out of the estimated 10,000 crocodiles she shot with her husband, and was able to hit a moving target with ease.

Ron praised his wife at every opportunity for being able to skin the reptiles faster than anyone else, and she would usually do it right after the kill – on the spot amid the mangroves and mosquitoes. 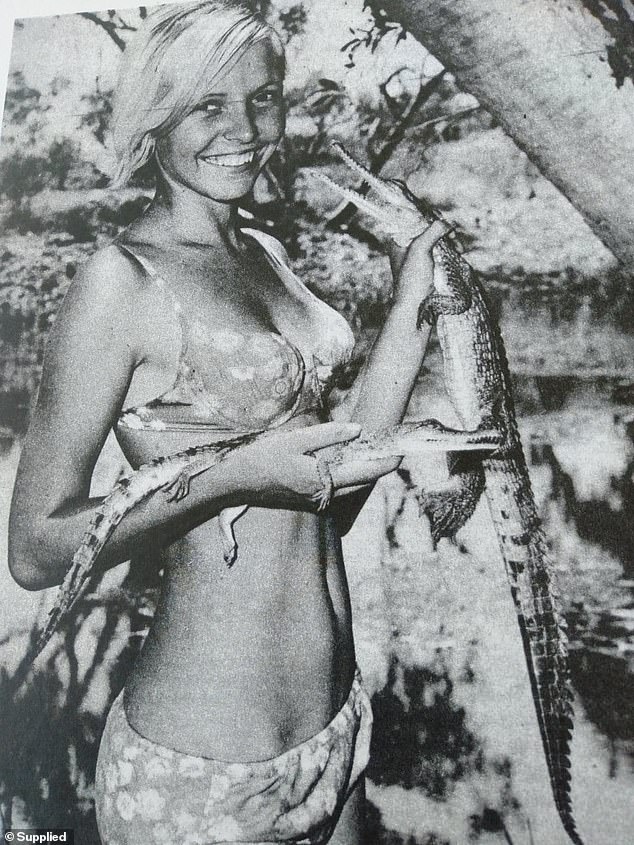 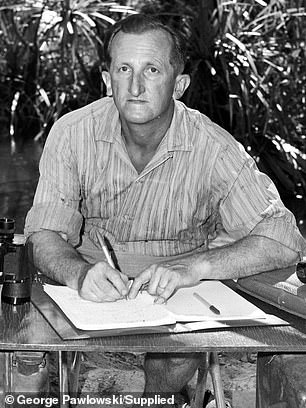 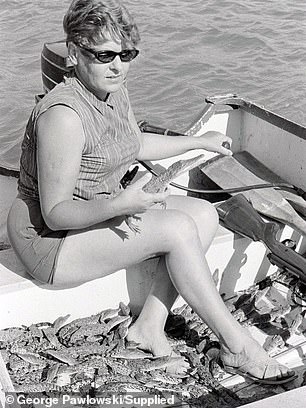 Ron (left) praised his wife (right) at every opportunity for being able to skin the reptiles faster than anyone else, and would usually do it right after the kill

‘She was better than me with a pistol and she was much better with a rifle at moving targets from a boat,’ Ron once told reporters.

‘We both could hit a bottle top at 100 yards, but Krys could shoot through the same hole the second time.’

After taking the 8.6-metre monster down, Ron built a small boat out of scraps and called it ‘Joey’ and the family started their new lives as crocodile hunters.

‘My parents were both legends in their own right, but my mother was something else,’ Mr Pawloski recalled. 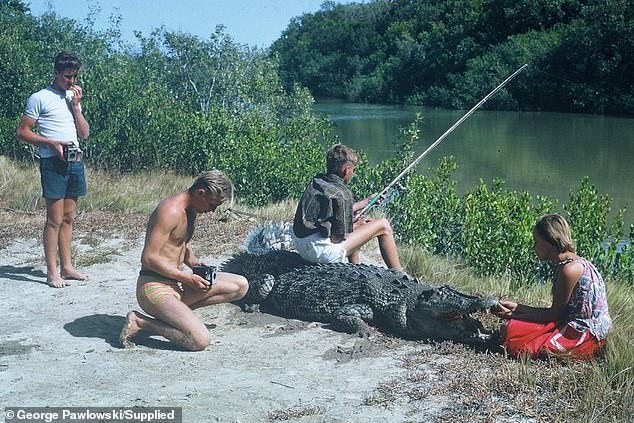 After taking the 8.6-metre monster down, Ron built a small boat out of scraps and called it ‘Joey’ and the family (pictured) started their new lives as crocodile hunters 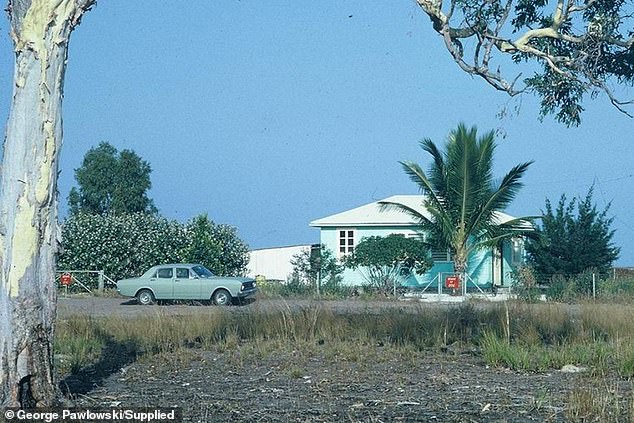 ‘She’d be up to her waist in thick mud but she always had lipstick on and the red nail polish – I think it contrasted with what she did for a living, and made her feel a bit different.’

He also explained fashion was important to his croc-hunter mother, and said she’d get home and change out of her muddy greens into traditional 50s dresses to relax around the house.

‘Even though I spend hours, day and night, wading thigh-deep through mud and swamps, it’s good to catch a glint of my nail polish as I pull the trigger of the rifle,’ Krys once told reporters in Brisbane, champagne in-hand.

Mr Pawlowski backed up his father’s claim and said his mother actively refused to be ‘put down’ by her male counterparts.

‘There was this guy up north who said no one could skin a croc faster than him.

‘They had a competition one day, and she’d skinned the croc, cleaned it, salted it, rolled it up and was having a coffee before he was anywhere near finishing.’ 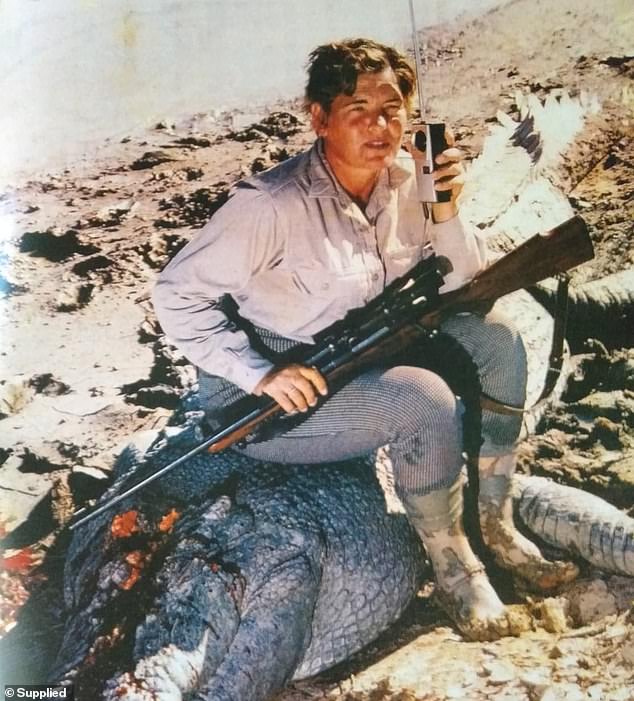 Despite having never shot a rifle prior to immigrating to Australia, the petite 5’4″ woman (pictured) quickly gained a reputation for being able to take a beast down in one move

Mr Pawlowski said his parent’s profession rubbed off on his siblings, and recalled finding his brother Stefan hovering over one of the deadly creatures one day.

‘He was so proud of himself for taking down such a big one, but I looked at him and said “that’s the closest I’ve seen anyone to a croc that’s still alive”.

‘And it was – it’s two eyes were open and staring at me. I’ve never seen anyone move so quickly – he screamed and jumped up, and shot it again to make sure it was dead.’

Despite the obvious dangers with croc hunter parents, Mr Pawlowski insisted he never felt as though his life was at risk.

‘We never felt threatened,’ he said.

‘You know, people ask what my life as a crocodile hunter’s kid was like and how dangerous it was and all that, but it was just life.’ 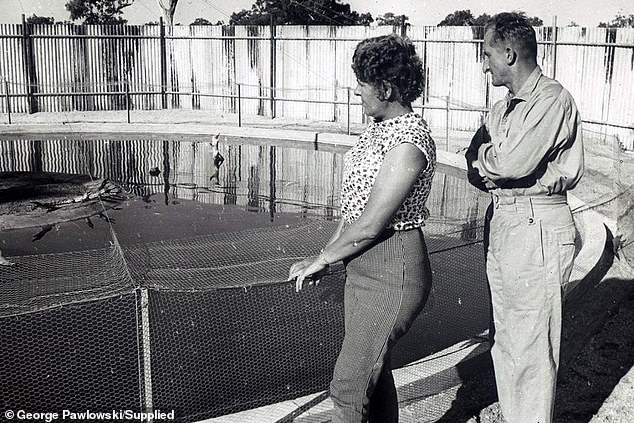 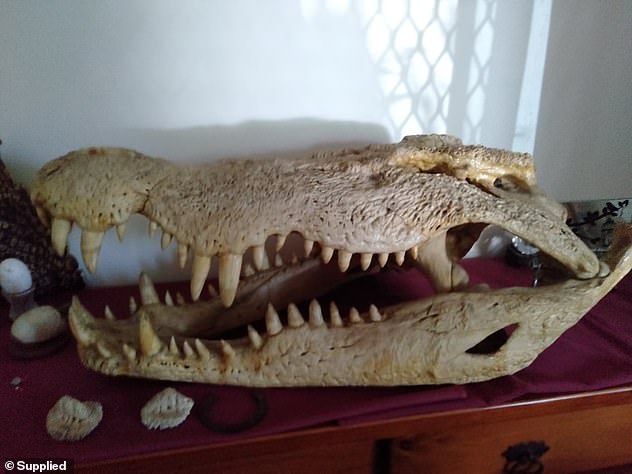 Pictured: the skull of the third largest crocodile Krys shot

Mr Pawlowski explained that crocodiles weren’t aggressive when he was a child, claiming they largely left he and his family alone.

‘Tourists have agitated the crocodiles by not reading the signs, or by baiting them in the hopes that they’ll jump out of the water – they’ve been taught to do that.’

Over time, Mr Pawlowski said his parents tired of shooting the creatures and began to work on conservation.

‘Back then, conservation wasn’t really something people spoke about,’ he shared.

‘They were shooting a lot of them and realised it was threatening the reptiles, so they set up the first crocodile conservation farms in the country, and possibly the world.’

Mr Pawlowski said his family’s greatest legacy is their work with conservation, and explained their work laid the foundations for conservation all over the world.

He is writing a book on his experiences growing up surrounded by saltwater crocodiles.