The biggest general election in the world begins in India

The biggest general election in the world got underway in India on Thursday, where 900million voters are expected to head to the polls over the next six weeks.

Voting took place in 17 Indian states and two Union Territories Thursday in the first of a seven-phase election staged over a month and a half which many people see as a referendum on Prime Minister Narendra Modi and his Hindu nationalist Bharatiya Janata Party.

At least one person was killed on the first day of polling in India’s general elections, a local leader of Andhra Pradesh state’s ruling Telugu Desam party who police identified as Sidda Bhaskara Reddy.

Reddy was killed in a confrontation with supporters of a regional opposition party, YSR Congress as violent clashes were also reported elsewhere in the state, where voters are casting ballots for 25 members of India’s lower house of Parliament, the Lok Sabha, and 175 state assembly seats.

With 900million of India’s 1.3billion people registered to vote, it is officially the world’s largest democratic exercise. Over the course of the election, 543 Indian Parliament seats will be decided from about a million polling stations across India.

With Modi as their frontman, the BJP won a clear majority in 2014 elections. Under the leadership of political dynasty scion Rahul Gandhi, India’s National Congress party, which ruled the country for about half a century since the 1947 independence, has struggled to coalesce India’s many opposition parties into a coherent effort that could go head-to-head with the BJP. Surveys show the ruling party projected to come out first again in this year’s polls, though with a smaller mandate.

Indian citizens of Masaladanga enclave queue up to cast their vote at a polling station in Cooch Behar on Thursday this week. The enormous election process will see nearly one billion voters turn out in almost a million polling stations across India over the next six weeks 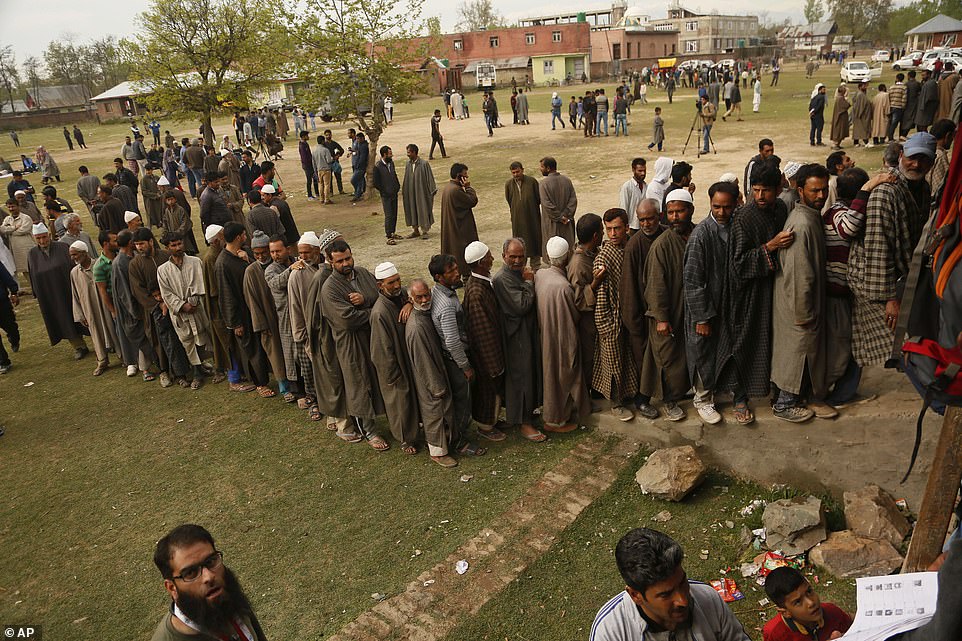 Kashmiri voters stand in a queue to cast their votes outside a polling station at Shadipora, on the outskirts of Srinagar in the country’s far north 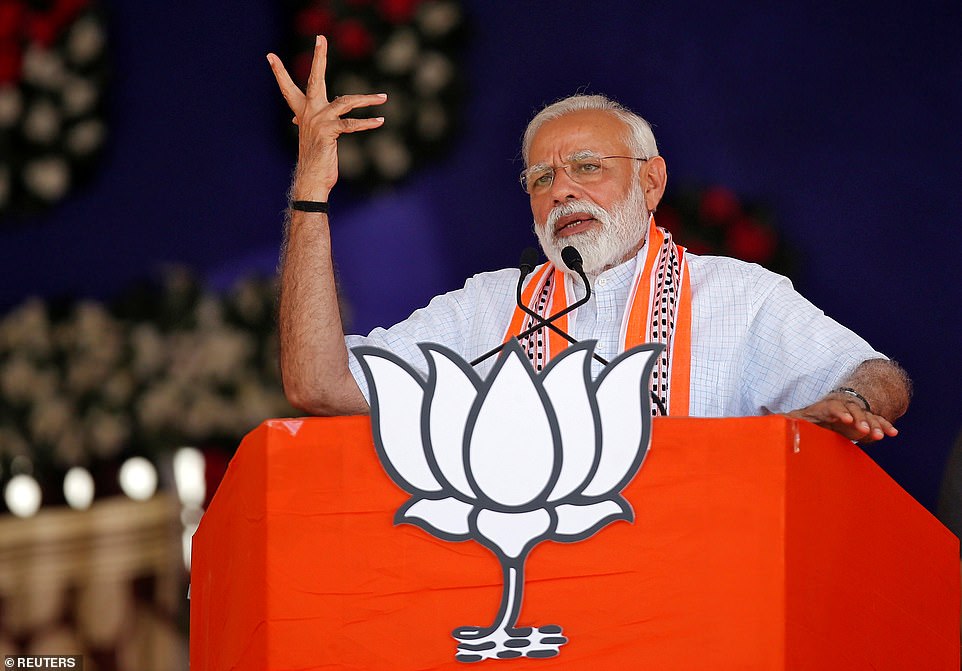 Polls show the ruling BJP party, headed by Prime Minister Narendra Modi (pictured on the campaign trail in Gujarat on Wednesday), is projected to come out first again in this year’s polls, though with a smaller majority

Supporters of Modi say the tea seller’s son from Gujarat state has improved the nation’s standing in the world. India’s economy has continued to grow under Modi, jostling with the United Kingdom for the fifth-largest in the world.

‘I vote for the progress of my country,’ said businessman Manish Kumar after casting his ballot for the BJP in the Ghaziabad district of Uttar Pradesh state.

Tapan Shome, an accountant, said he and his wife voted ‘to make India a good, prosperous country.’

But India’s growth hasn’t meant a better employment outlook in the country, where an estimated 1 million people join the labor pool each month. According to the Centre for Monitoring the Indian Economy, employment contracted in the year following a 2016 demonetization program to remove most of India’s banknotes from circulation by 3.5 million jobs.

And Modi’s critics say his party’s Hindu nationalism has aggravated religious tensions and violence against Muslims and other minorities in constitutionally secular India.

Since a suicide bombing in disputed Kashmir killed 40 Indian paramilitary forces in February, the BJP campaign has played up the threat of Muslim-majority Pakistan. 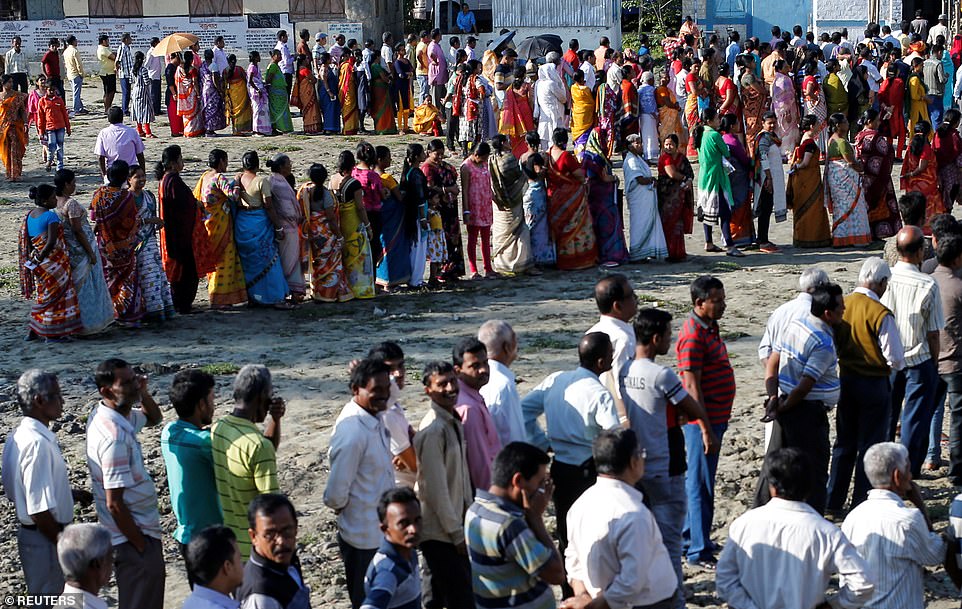 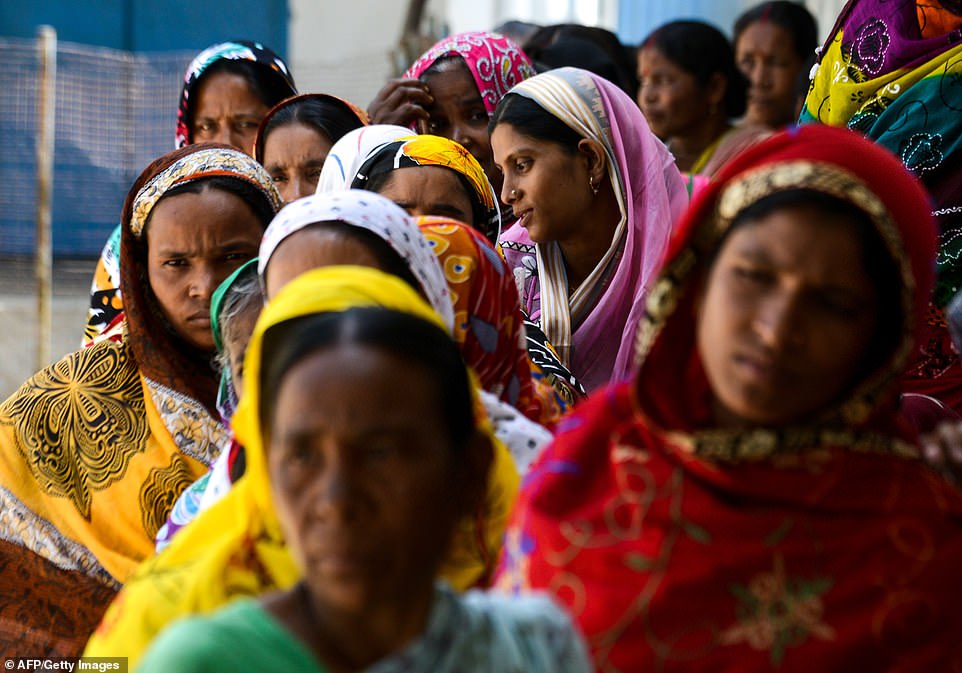 A group of women dressed in brightly-coloured saris wait in line to cast their vote in Cooch Behar, west Bengal on Thursday morning 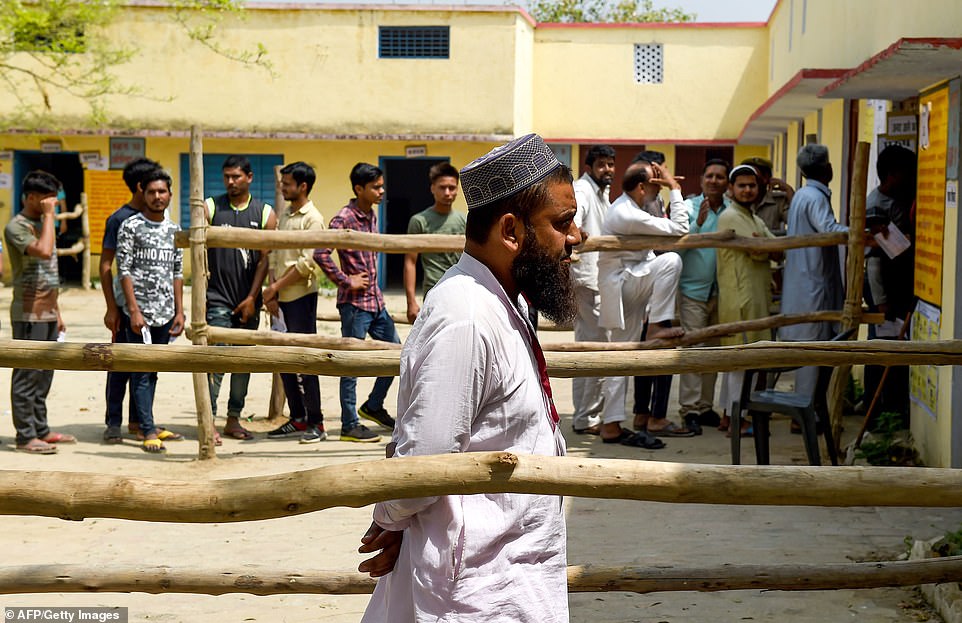 The election will decide who sits in India’s lower house of Parliament, the Lok Sabha, as 543 Indian Parliament seats will be decided from about a million polling stations across India 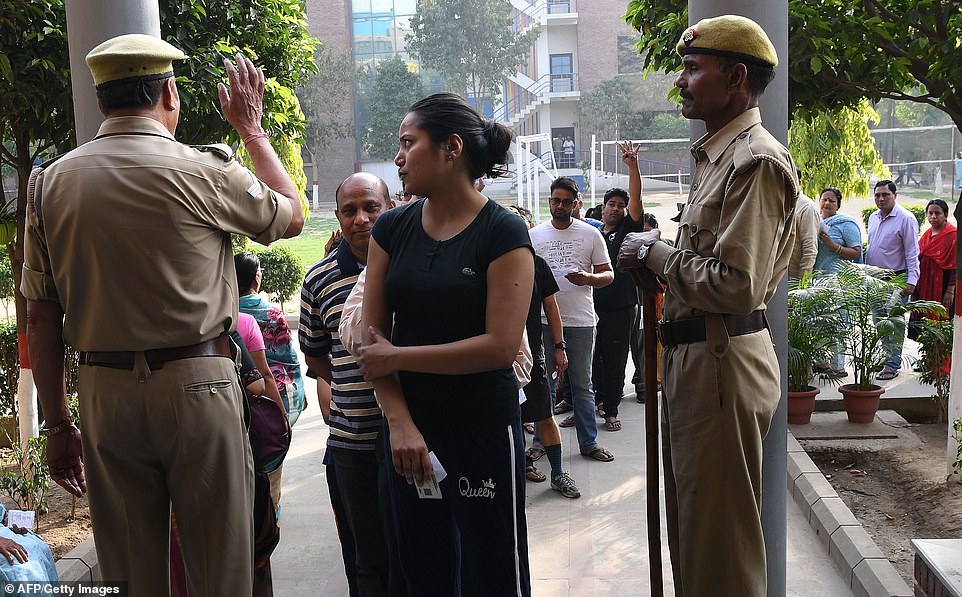 Security has been drafted in across India to keep control of the elections. At least one person was killed on the first day of polling in Andhra Pradesh 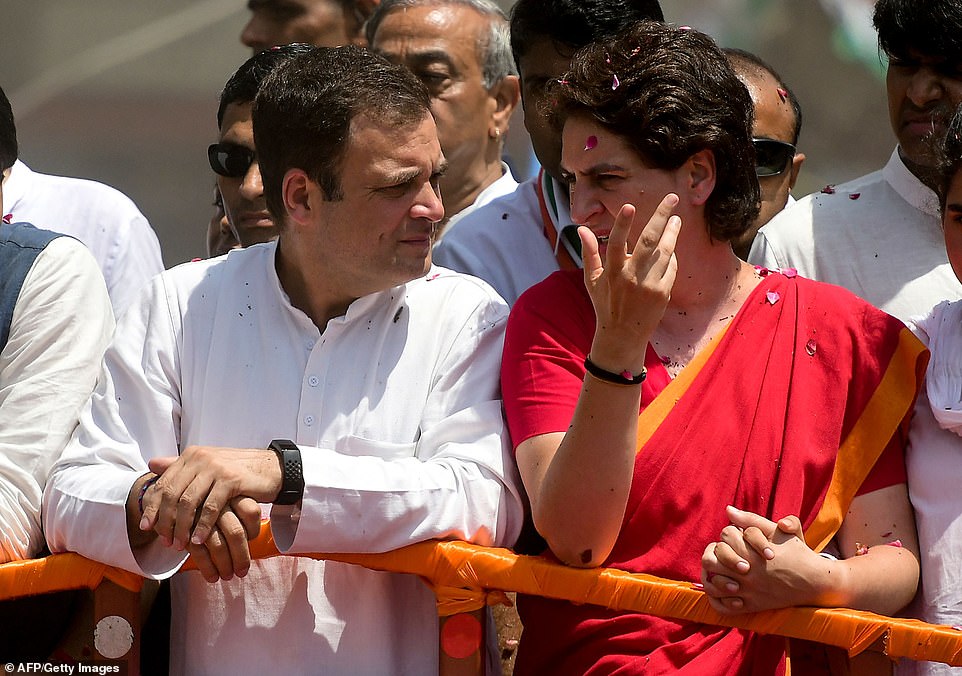 Voting also began Thursday for two parliamentary seats in Kashmir, a Himalayan region split between India and Pakistan and claimed by both in its entirety, amid tight security and calls for a by Muslim separatists who say the polls are an illegitimate exercise. Armed police and paramilitary soldiers in riot gear guarded polling stations and nearby roads.

In the northern Baramulla area, many people said they came out to vote only to express their disapproval of the BJP, calling it an ‘anti-Muslim’ and ‘anti-Kashmiri’ organization. The BJP’s election manifesto promised to scrap decades-old special rights for Kashmiris under India’s Constitution that prevent outsiders from buying property in the territory.

‘I didn’t want to vote but then there’s an imminent threat by politicians like Modi who are up in arms against Kashmiris,’ said Abdul Qayoom, a voter in Baramulla town. ‘They’ve taken our rights, now they want to dispossess us from our land. We want to stop people like Modi.’

The voting follows a sweeping crackdown with police arresting hundreds of Kashmiri leaders and activists. Authorities also banned the movement of civilian vehicles on a key highway to keep it open exclusively for military and paramilitary convoys two days a week during India’s general election.

The first round Thursday could prove important for the BJP, which won only 32 of 91 seats in 2014 elections. It is seeking to improve its tally this time. 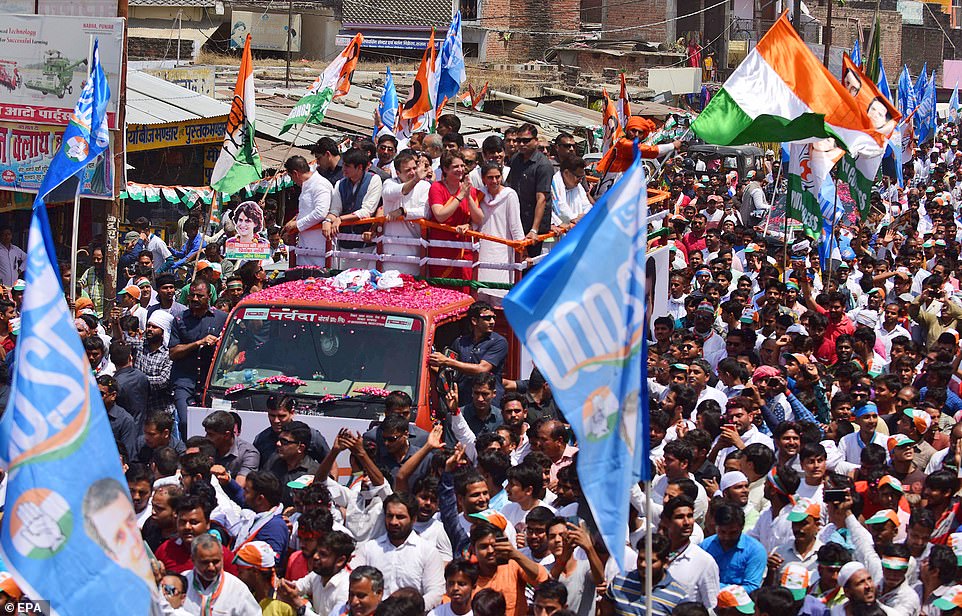 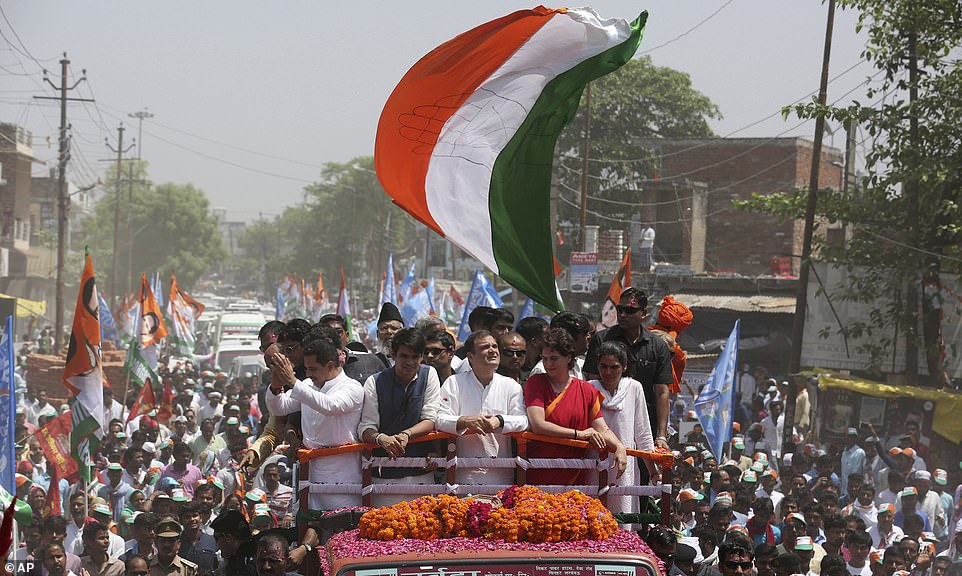 Under the leadership of political dynasty scion Rahul Gandhi, India’s National Congress party, which ruled the country for about half a century since the 1947 independence, has struggled to coalesce India’s many opposition parties into a coherent effort that could go head-to-head with the BJP 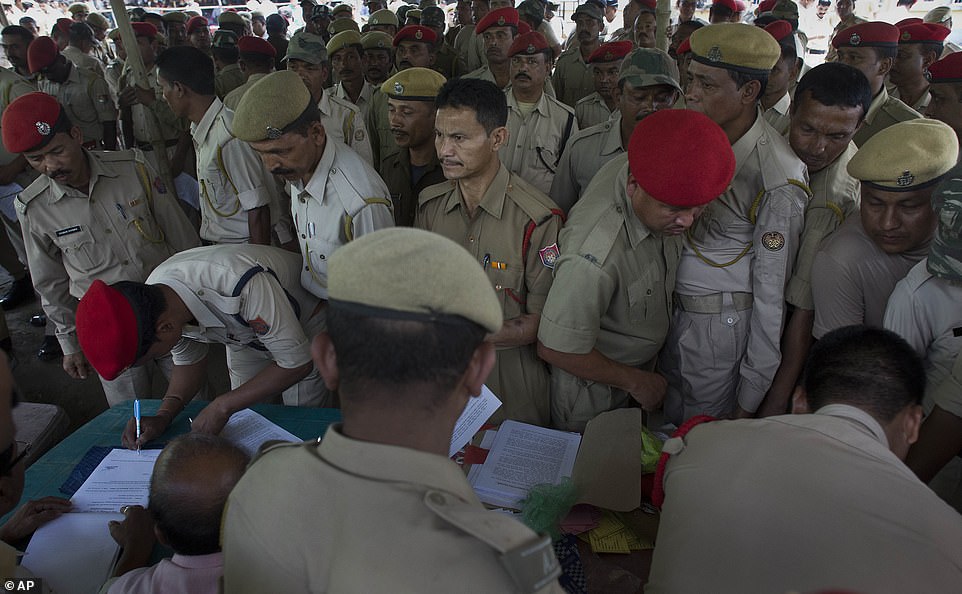 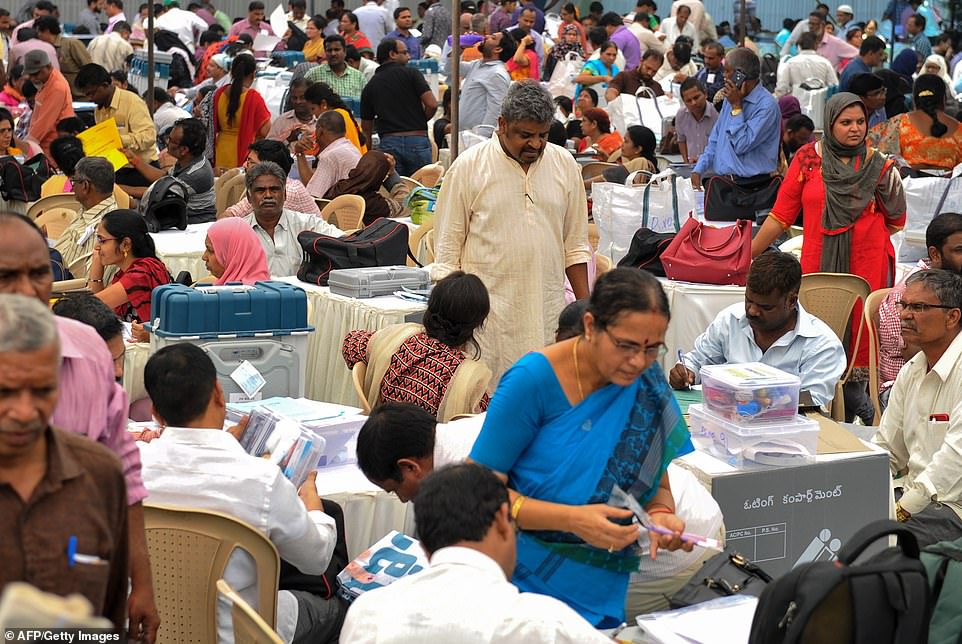 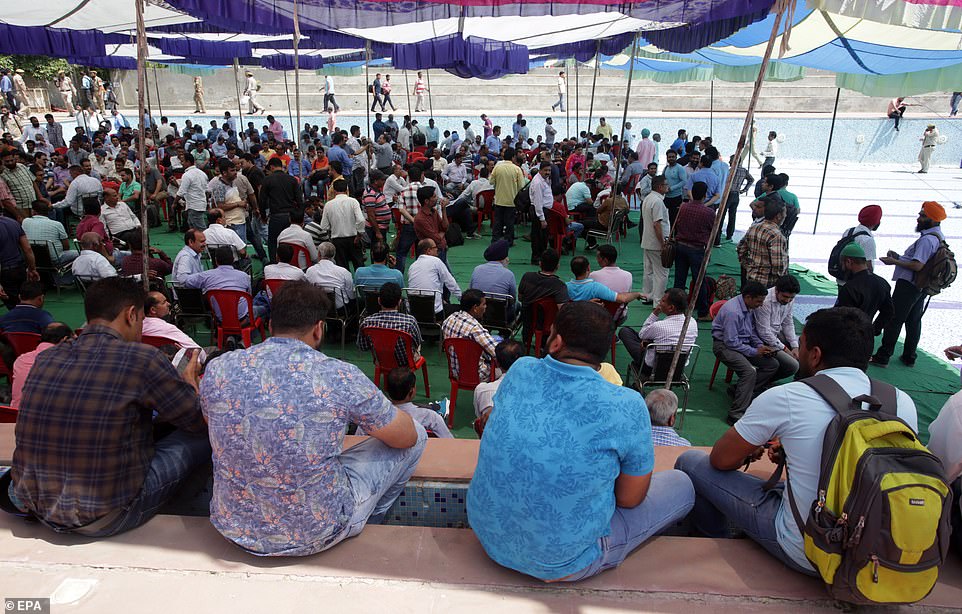 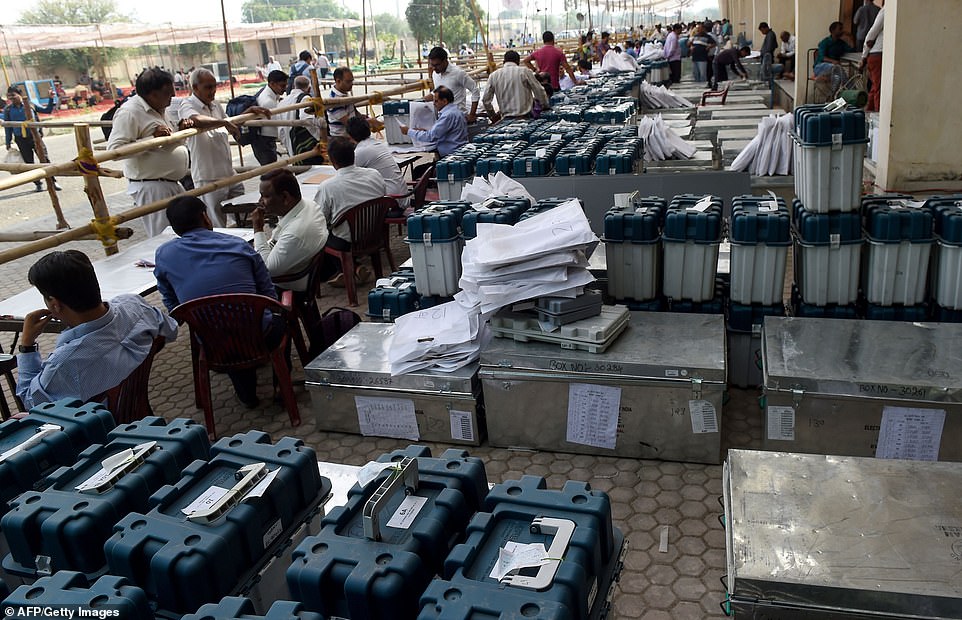 With 900million of India’s 1.3billion people registered to vote, the election is officially the world’s largest democratic exercise 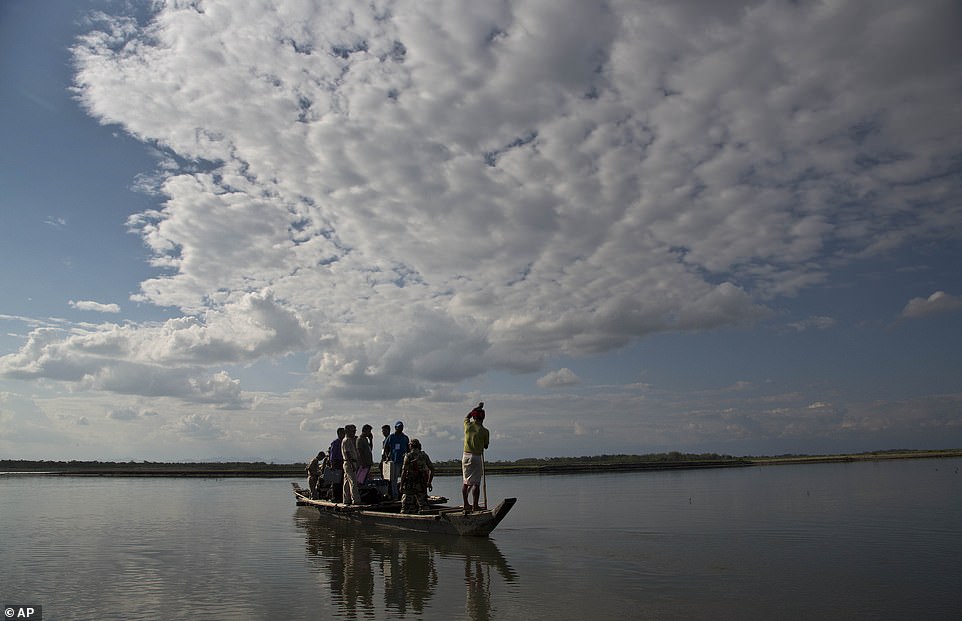 Indian election officials and paramilitary soldiers with election materials travel on a country boat to cross the river Brahmaputra on the eve of first phase of general election in Majuli, Assam on Wednesday