The biker’s guide on e-fatbikes and electric mountain bikes 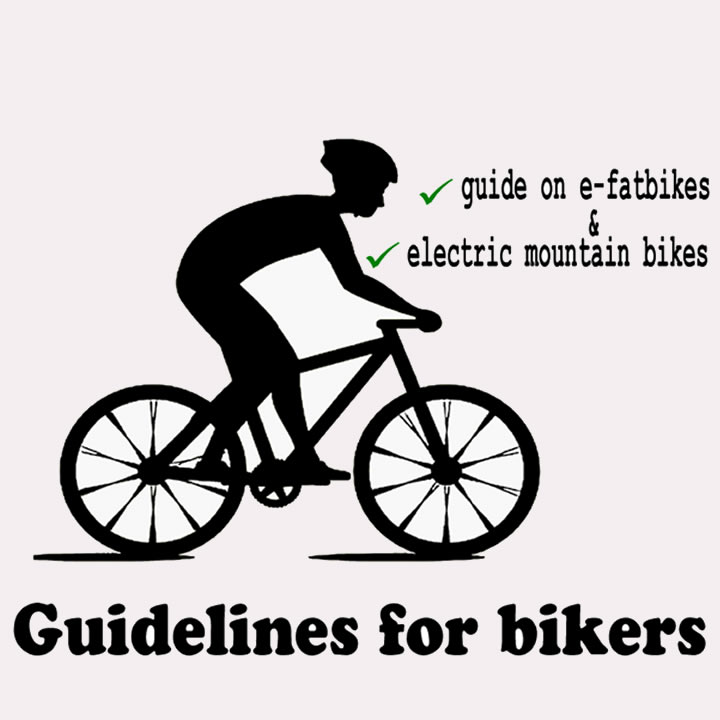 If you are looking for information about what an electric mountain bike is but you find yourself a little lost. Here you can read from its origin to some reasons to buy it. A lot of useful information for anyone who is thinking of starting the world of electric bikes.

History of the electric mountain bike:

The electric bicycle dates back – this will surprise many – in the late 19th century! And, after all, it is something as simple as a traditional bicycle with a small motor or electric battery inserted. And yes, the first batteries date back to the last decades of that century, the years when bikes became a global boom and cycling, as a sport, began its international development.

However, it was not until the 80’s, the decade of expansion for mountain biking, when e-bikes – that’s how they have become known – began to be produced on a large scale. Since then and until today development and innovation have been a constant in the world of electric bicycles.

The choice of the fatbike:

More and more we can see bicycles with large tires on the roads. Called Fatbike, these bikes are not intended for winter snow rides only and can also be used in all weather conditions. So much so that the Fatbike geometries allow better stability and grip in all circumstances. You will be forgiven for all driving errors and obstacles will seem easier. Even though the rider needs to be physically fit to steer the fat wheels of the Fatbike, the bike is very easy to ride and when you use it it is very comfortable.

The fatbike can overcome all types of terrain:

Through the snow, sand or mud, a (electric) Fatbike will adapt perfectly and will provide you with incredible motor skills that will allow you to maintain a constant speed despite the very soft ground. But contrary to preconceptions, the Fatbike is also an effective weapon in crisp, dry singles. Its wide covers combined with low inflation pressure allow the rider to keep a bike comfortable and stable. Fatbikes are therefore capable of passing fast over all difficult terrain.

The only enemy of these thick wheels is the asphalt where the tires must be slightly overinflated to maintain good performance.

Fatbike practice is an interesting alternative to normal MTB practice. It is ideal especially for cyclists who have to face harsh environments throughout the year, such as the mountains. Due to their simple design, lack of complex pivot point and generally suspension, Fatbikes are sturdy, rustic bikes. They require little maintenance and can therefore be perfect for riders who don’t want to have to repair or adjust their MTBs every week. They will also be able to rise as a traveling companion on a multi-day getaway. Finally, the Electric Fatbike is a pleasant alternative to maintain the power of a normal bicycle and the comfort of a Fatbike.

The reasons are endless, but we will try to reduce them to the ones we consider most important, the five strengths why someone should buy one, the five reasons that define it and give it value in the market.

1.The same cycling, but more comfortable:

One of the most reiterated arguments by detractors of e-bikes is that they eliminate the main factor of those who see this exclusively as a sport, and that its usefulness is reduced to those who want to use it in the city, as just another mean of transport and with minimal effort.

Sorry to end your argument, but if they ever tell you that, know it beforehand that is false. On an electric bike you pedal, you pedal a lot, only you have the possibility of making your outings more comfortable. Do 60 kilometers when before you did 30, thus reaching different places; reach a summit without having to set foot on land, when before you were frustrated having to do it. It is an accompaniment, a complement to your effort that allows you to go further, not a motorcycle.

2.They are not dangerous:

Or at least you will not run more risks than the relative -but existing- ones to which we all expose ourselves practicing mountain biking. Most automatically cut off power assistance when they reach 25 mph, a speed usually exceeded on propitious terrain.

3.They respect the environment:

Here comes a factor more related to its urban use, but no less important. For a long time in much of Europe, and increasingly in Spain despite the scarce tradition, electric bicycles -and traditional ones- are becoming the daily means of transport for many people, something vital when it becomes increasingly evident the bill that our planet is passing through climate change.

Its price, obviously, is considerably higher than that of a traditional bike. However, the sale price to the public is becoming more adjusted, since the expansion of the market has generated great competition in the sector, which is struggling to offer the best qualities at a competitive price.

5.They weigh more, but it’s not a problem:

Yes, an electric bike weighs more than traditional ones in the same range.In the case of the fatbike, its thick tires will add an extra load. But it must be said that this, in no case should it be a problem to decide to acquire it or not: there are those that comfortably drop below 20 kg, and the power of its battery more than compensates for the overweight that we must bear.

What to consider when choosing our electric mountain bike?

When choosing our electric bike, certain details must be attended to, in addition to those that must be evaluated on a traditional bicycle (suspension, components, price, warranty, frame, wheels, etc.).

One of them is the battery, its useful life and the capacity it has to operate on a single charge (autonomy). We must ensure that it is lithium – today it is rare that it is not – and ask about the charging time, since there are those that need up to 9 hours to complete the process. Around three hours is acceptable. Both this and its capacity and the rest of the technical specifications it is advisable to consult with the clerk of the store we go to.

The position that the motor takes inside our bicycle: in our opinion, anyone who has it installed on both the front and rear wheels, especially the latter, should be ruled out; always opting for an electric bike with a central motor or bottom bracket. The pedaling aid is instantaneous, without any lag, its driving is more comfortable and safe due to the reduction of the center of gravity and they incorporate a system that optimizes the energy consumption of the batteries, thus increasing their autonomy.

One of the accessories that without being absolutely necessary does add a plus to our electric  bike is the presence or not of an on-board computer. In addition to the usual features, it becomes more necessary -in case of lacking automatic control- to control the speed at which we circulate.

In this article we have wanted to unravel much of the information necessary to enter the knowledge about these electric bikes, but there is much more available in which we have not wanted to go deeper to make this text as concise and enriching as possible.