An ‘unpredictable’ family board game starring characters from popular Australian children’s cartoon Bluey has sparked frustration and confusion among parents and kids alike.

The Bluey Shadowlands Board Game has players of all ages tearing their hair out about everything from the vague instructions on how to assemble the game and a spinner that doesn’t work, to the inability to make sense of the rules.

Described as ‘fun and unpredictable’ for ages three and over, the aim of the game is to remain in the shadowy bits, collect Cupcake Cards and be the first to the picnic rug.

Based on the fun adventures of much-loved blue heeler Bluey and her friends, players spin a palm tree in the centre of the board to move the shadows as they play.

Unable to make sense of the rules provided, one Sydney family resorted to making up their own, which ended with a frustrated toddler throwing the game across the room.

The websites of retailers selling the game have been flooded with negative reviews and families sharing their nightmare ordeals of playing.

So unpopular has the game become that Amazon slashed its price from $22 to just $7, but even that was too high a price for some unhappy customers.

‘My daughter loves Bluey, however this game is poorly designed and made. The palm tree is difficult to spin and needs an adult to twist. Wish the design and concept of the game was better. Would not recommend,’ one mum wrote on Target’s website.

Another added: ‘The adults had trouble keeping up with what the heck to do, much less a child. The directions are vague at best as to who moves when and it gets very confusing.

‘The excitement quickly wore off and turned into frustration and impatience.’ 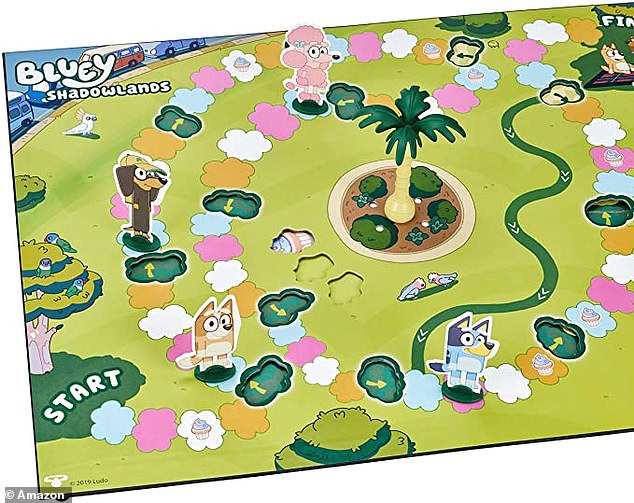 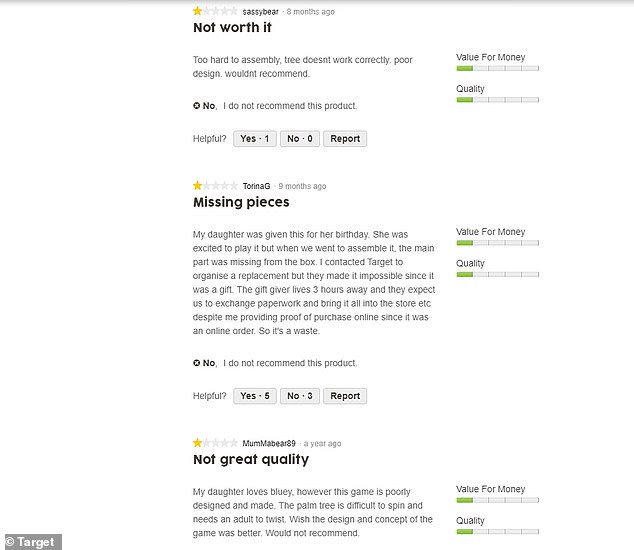 Retailers selling the board games have been inundated with negative reviews, including Target (comments pictured)

Amazon is inundated with similar reviews.

‘We are Bluey obsessed so we were excited to get this – I can’t even explain the ways this game was a fail,’ one mum wrote.

‘The kids didn’t finish one single game before they quit. It wasn’t fun, it wasn’t clear, the setup made no sense- all in all, I have no idea how this game was picked up/developed/produced.’

Another wrote: ‘This game is terrible. The cardboard doesn’t click into place as is needed, the tree is impossible to turn, and the dynamics of the game are very vague and we can’t figure it out. I don’t know who tests the games or if they get tested at all.’

Bluey is an Australian television series that follows a lovable family of blue heelers.

The cartoon is now a worldwide hit and is wildly popular in the US after premiering on the Disney Channel, Disney Junior and Disney+ two years ago.

The Brisbane-produced show was recently named on Rolling Stone’s 100 Best Sitcoms of All Time list. 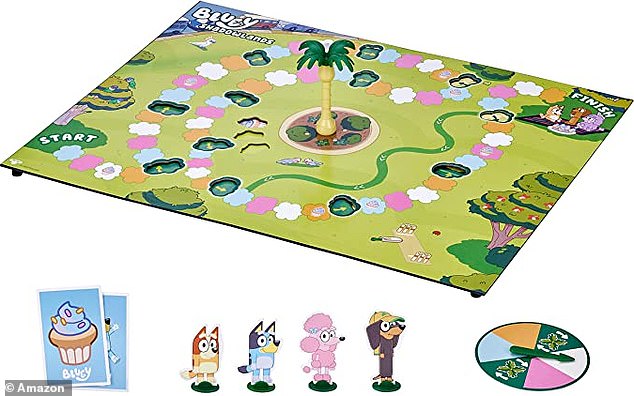 Many parents complained about the game’s pieces, including the spinner (bottom right)