The brightest breaks in the world

These vibrant destinations are guaranteed to brighten up your day and bring a smile to your face.

And one thing is for sure, they need no Instagram filter.

From the vividly painted townhouses of Copenhagen to the rainbow-drenched streets of Venice, scroll down for our pick of the world’s brightest breaks…

Imagine the scene. You’re a sailor heading back to port when the mist descends and you’re lost. Then, through the thick, grey fog some flashes of vivid colour appear – they’re the brightly painted buildings of your home village, guiding you back to safety. This is the popular tale of how the houses of Burano, in Italy’s Venetian Lagoon, got their breathtaking colours. Today, government regulations ensure the colours are maintained to guarantee the spectacular Insta-worthy effect. Snap them as you explore the streets at the northern end of the lagoon, where there’s also great seafood, locally made butter biscuits and lace, and the Church of San Martino – featuring a leaning bell tower almost as alarming as Pisa’s – to admire.

Travel details: Fly to Venice from most UK airports with BA, easyJet, Ryanair or Jet2 then take a 45-minute journey on the number 12 vaporetto via Murano. Stay at Casa Burano. It’s a ‘hotel diffuso’, which means rooms are spread across several buildings, in this case 13 rooms in five colourful houses. B&B starts at £120 a night per room (casaburano.it).

This neighbourhood – formally called the Malay Quarter – is known for its vibrant houses sitting side by side like blocks of colour in a paint box. Most of the houses were built in the 1760s as ‘huurhuisjes’ or rental houses leased for slaves and were painted plain white. The story goes that, when freedom came, the former slaves decorated them in bright colours to symbolise the joy of liberty. Muslim residents added even more colour, painting their houses to celebrate the annual festival of Eid one year and keeping them that way ever since. Today the area is gentrifying fast and several walking tours take you round the cobbled streets of what is the most colourful part of the Rainbow Nation.

Travel details: Premier Holidays has a six-night Cape, Wine and Whales self-drive tour to South Africa (from £549pp with car hire) including a two-night stay at Protea Hotel in Cape Town, which is a 20-minute walk or ten-minute drive from Bo-Kaap (marriott.co.uk). 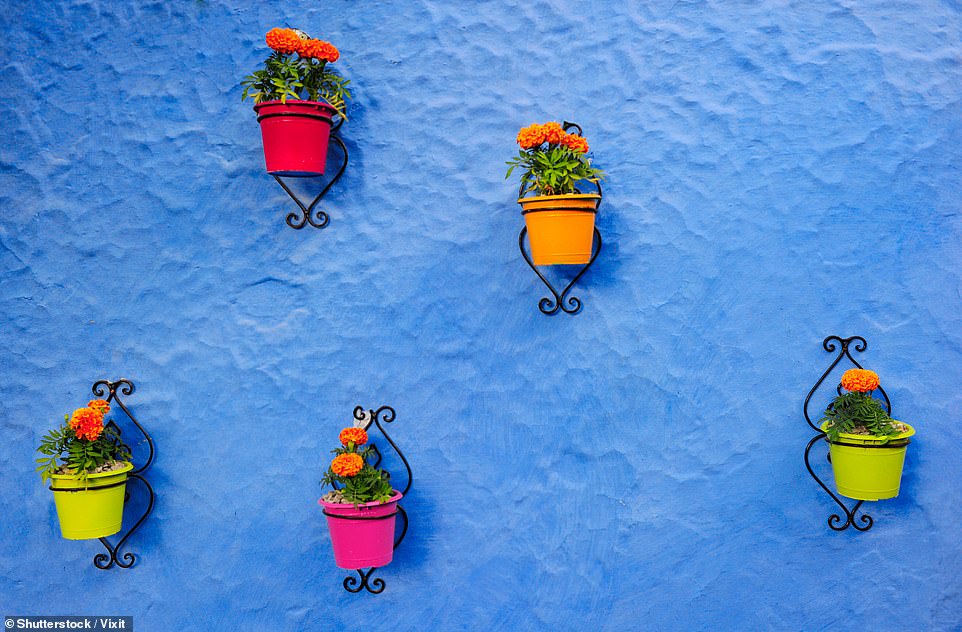 The little town of Chefchaouen, above, is known for its colour-washed buildings that mirror a cloudless Moroccan sky

Tucked away at the foot of the Rif Mountains is a stunning vision of blue. The little town of Chefchaouen is known for its colour-washed buildings that mirror a cloudless Moroccan sky. It is said the colour was introduced in 1930 by Jewish refugees as a symbol of sky and heaven while others say it goes back to the 15th Century when Jews lived alongside local Moroccans and Moriscos (Muslims who converted to Christianity) and painted the buildings as a nod to celestial powers and to represent peace and safety in their pluralistic hometown. Visit the Kasbah Fortress Museum or hike to a hilltop Spanish mosque to get a very blue, bird’s-eye view.

Travel details: The nearest airport is Tangier, a two-hour drive away. Air Arabia Maroc has direct flights from London from about £150 though Ryanair and others have cheaper deals involving stops in Spain. Stay at the Casa Perleta hotel, a colourful, traditionally built house in the old walled city. Rooms from £38 a night. (casaperleta.com).

Down the coast from Porto (itself a colourful place) is the diminutive Praia da Costa Nova in the town of Gafanha da Encarnação. Along the white sandy beach are rows of houses known as palheiros, characterised by wood or concrete façades and decorated in bright stripes alternating with white. Back in the 19th Century, these buildings were ‘haystacks’ – basic elevated structures with no internal walls – used by fishermen to store their materials. These days they’ve been re-imagined and partly rebuilt as homes and holiday cottages with internal decoration that often matches their exterior – splashes of red, blue and yellow against cool white. While you’re there, think about a picnic on the edge of the Aveiro Lagoon, where flowers, fishermen and bird lovers abound.

Travel details: Stay in a typical Costa Nova ‘haystack’ through Airbnb from about £45 a night for a two-bedroom flat. BA, TAP Air Portugal, easyJet and Ryanair all fly to Porto, from £45pp return. 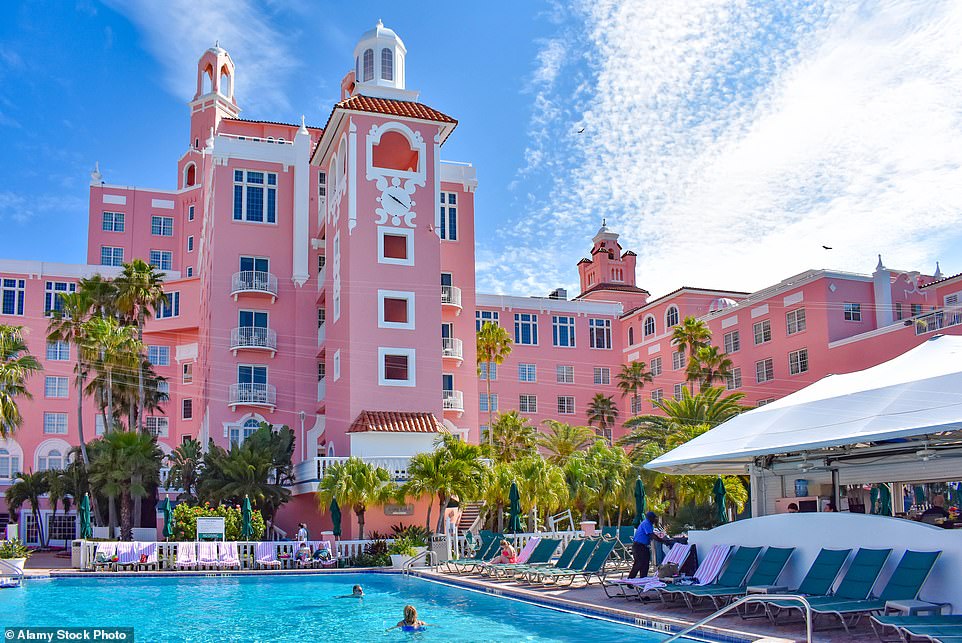 Pretty in pink: The very grand Don CeSar Hotel in St Petersburg is also known as the ‘pink palace’

Locals call it St Pete’s and there’s colour around almost every corner in this Gold Coast city. More than 70 urban murals of all sizes, shapes and styles have appeared in the past decade, from small abstract designs on roadside power boxes to large-scale designs on buildings. The most colourful examples include whimsical figures by Jennifer Kosharek in collaboration with renowned mural artist Thirst, and a 60ft abstract multi-coloured mural by Erik Jones. Join a guided tour by Florida Craft Art to have the stories explained (£10 floridacraftart.org). Award-winning beaches and the world-renowned Salvador Dali Museum are other attractions of the increasingly vibrant St Pete’s. 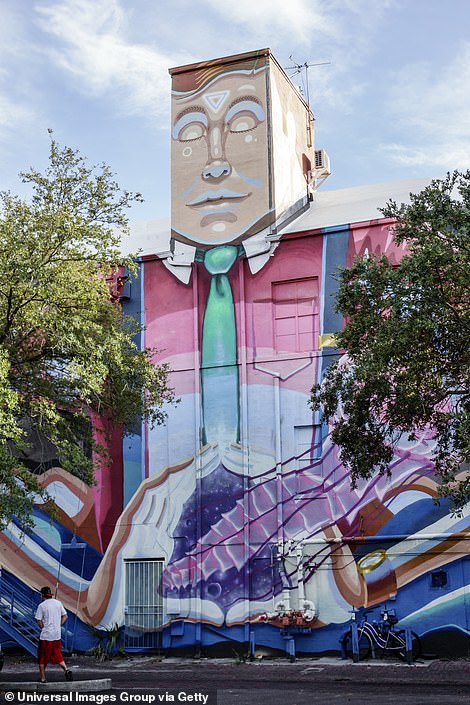 Pictured above is a vibrant mural in Florida

Travel details: St Petersburg is a half-hour drive from Tampa. Fly there with BA or Norwegian from about £275pp return. For a bit more colour, stay at St Pete’s ‘Pink Palace’, the very grand Don CeSar Hotel, from £203 per room a night (doncesar.com).

One of the oldest cities in Canada, Saint John has become known for its charming, brightly coloured houses. In downtown Saint John City you’ll find what locals call ‘Jellybean Row’. It’s where properties built as temporary accommodation after the Great Fire of 1892 have endured. They are now painted everything from banana yellow and jade green through to pumpkin orange. St John is one of the oldest cities in Canada and the idea of painting the houses began in the 1970s in a bid to inject new life into the declining downtown area. It worked – so as you snap the colours you won’t be short of equally vibrant, independently owned places to eat or drink.

Travel details: The nearest airport is in Moncton – you can get there via Halifax on WestJet from £442 return. Stay in a yellow, clapboard hotel, the charming Maplegrove Inn from £110 a room per night, or the similarly priced Shadow Lawn Inn nearby (shadowlawninn.com). 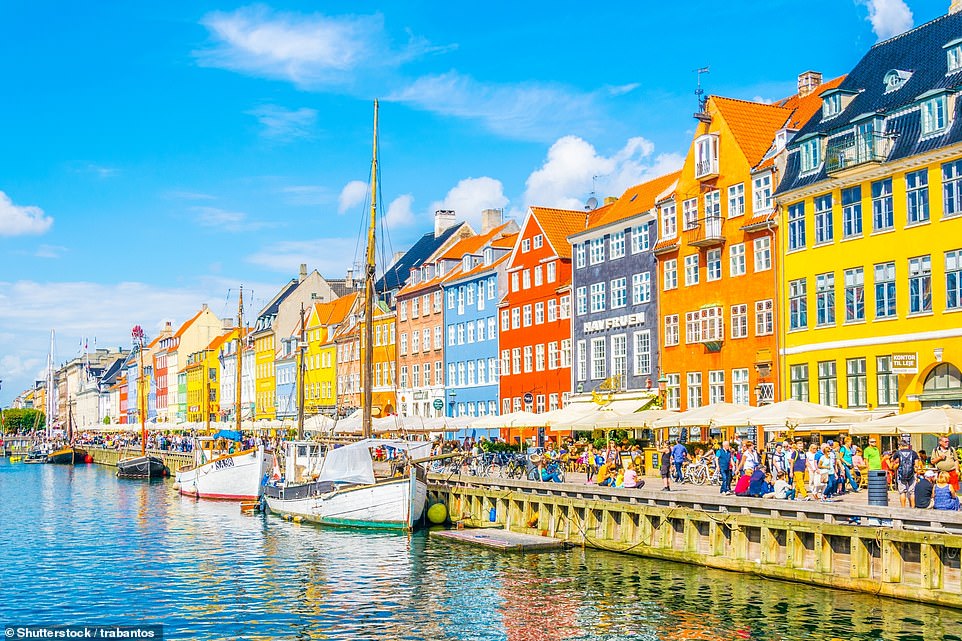 Years ago, Nyhavn was a busy port, with ships visiting from all over the world and filling the area with sailors, pubs and vice. Now, the stunning 17th and early 18th Century townhouses, painted in colours as diverse as pea green, sunflower yellow and burgundy, have been renovated and the area is filled with music, food and a wonderful atmosphere.

These colourful properties have long been favourites with creatives, most famously Danish fairy tale writer Hans Christian Andersen who wrote The Tinderbox, Little Claus And Big Claus and The Princess And The Pea while living at No 20. Nyhavn has also appeared in several films including Ingmar Bergman’s A Lesson In Love and The Danish Girl with Eddie Redmayne.

Travel details: Stay at the waterfront 71 Nyhavn Hotel from £280 a room a night. 71nyhavnhotel.com. BA, Norwegian, easyJet and Ryanair all fly to Copenhagen from London airports from £40pp return. 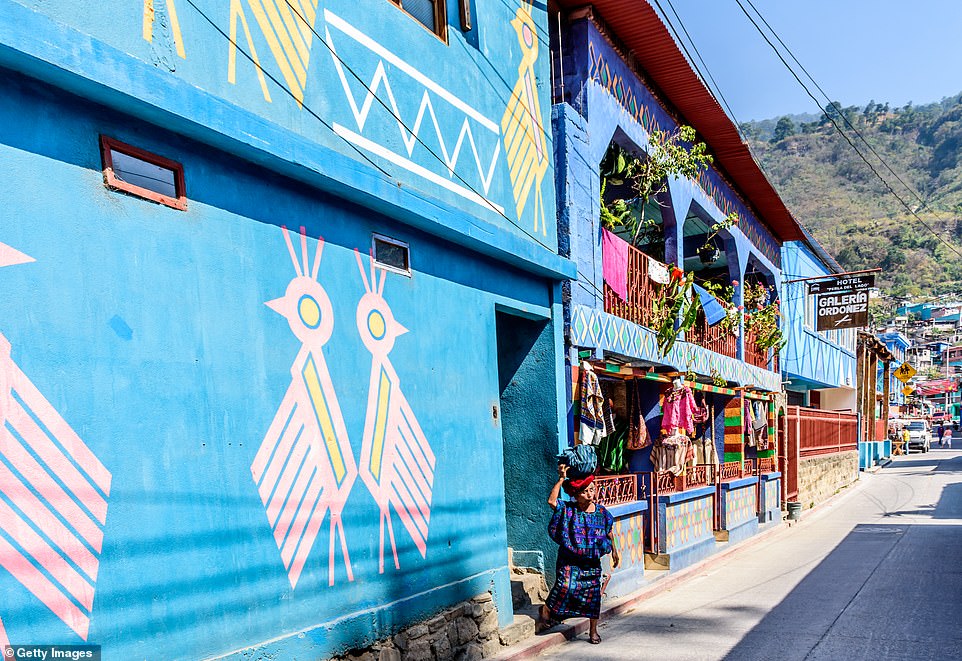 No filter: Buildings decorated in the paint project at Santa Catarina Palopo, Guatemala

Colour story: The vibrancy of volcanoes.

Head to the shores of Lake Atitlán in Guatemala to find the freshly painted town of Santa Catarina Palopó. Its 5,000 Mayan residents used to make their living from farming and fishing but have turned to tourism since their arable land started being gobbled up by urban sprawl. And what do tourists like? The Santa Catarina Palopó paint project, which began in 2016 and encourages residents to paint their houses with the traditional motifs you see on Guatemalan woven blouses. That means lots of pictures of birds and vibrant volcanoes in five key colour combinations. Three years later and cafes, artisan shops and other small businesses are opening to make visits even more fun.

Travel details: Scott Dunn (scottdunn.com) offers a 12-night luxury holiday to Guatemala from £4,100pp, which includes two nights at Casa Palopo on Lake Atitlán where rooms have been designed by Diego Olivero, the designer behind the paint project. BA flights and private transfers included.