The Canaries for culture vultures! A guide to what the islands offer

The Canary Islands, a Spanish archipelago off the coast of northwestern Africa, are packed with art, architecture and history if you know where to look.

Here’s our guide to the cultured side of the Canaries – and you’ll be astonished which island tops the list.

Start a tour of the island’s arty side with a visit to the former home of Lanzarote-born artist Cesar Manrique, an extraordinary structure built in an undulating lava field in Tahiche. Abstract works by Manrique (1919-1992) hang alongside works by Picasso and Miro in a sequence of underground chambers fashioned out of volcanic bubbles.

Manrique’s vivid imagination has had an impact on many tourist attractions on Lanzarote. One is the contemporary art museum at Castillo San Jose (spain-lanzarote.com) in Arrecife, the capital. Manrique oversaw the redesign of the castle, which now has a series of rooms with eye-catching works.

From here, head north – a hire car is essential – stopping for a while at the beautiful Jardin de Cactus at Guatiza, another creation of the island’s best-loved artist. It’s like an art gallery created by nature, with cacti of all shapes and sizes in a circular hollow.

Further north still, you’ll discover the brilliant excavated volcanic tunnels at Cueva de los Verdes (cactlanzarote.com), where you are led deep underground on well-organised tours. Yet again, Manrique was behind this transformation of nature. 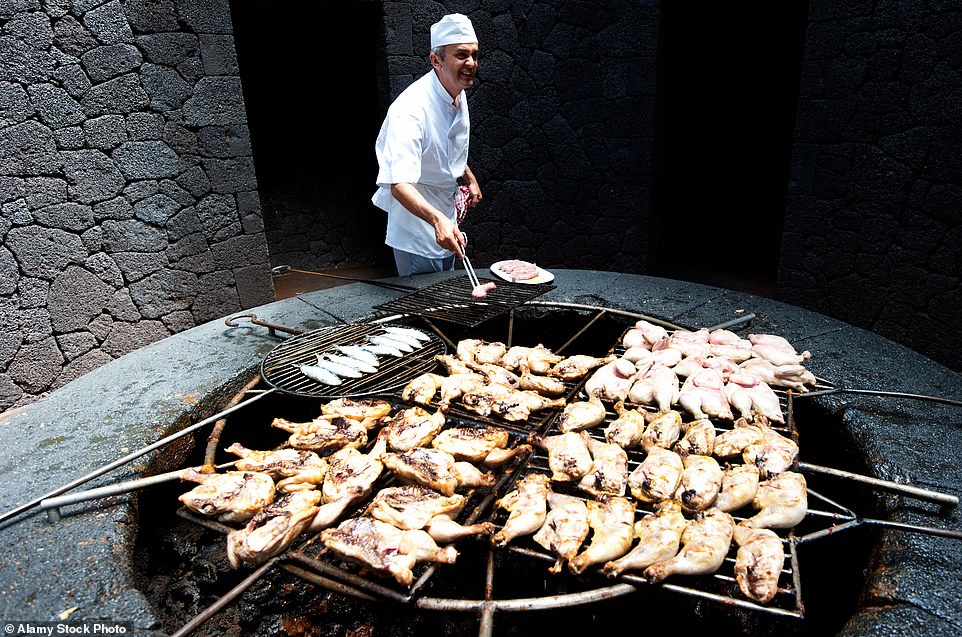 Hot stuff: A chef uses the natural volcanic heat for grilling on Lanzarote

In the very north-east corner of the island is another of his creations. This is Mirador del Rio (cactlanzarote.com), a spectacular viewing point peppered with architectural touches on a 1,600ft cliff overlooking the little island of La Graciosa.

Art scene: The Cesar Manrique Foundation in Tahiche captures the vision of the artist, who stumbled upon the volcanic bubbles in a lava field here in 1968 and decided to build a home (fcmanrique.org).

A little bit of history: Learn about the 1730s volcanic eruptions on a tour of Parque Nacional Timanfaya. The story of how they affected the island is told on bus tours among lava fields and cones. Manrique designed a splendid circular visitor centre/restaurant – the geothermal-heated chicken here is delicious (reservasparquesnacionales.es).

Best for foodies: Bodega Geria is a vineyard deep in volcanic landscape. The tapas bar serves succulent grilled sardines or garlic prawns with potatoes topped with mojo hot sauces and a glass of wine for €6.50 (lageria.com).

Blow the budget: Princess Yaiza is a five-star hotel with pools, a spa and a sandy beach. A week’s B&B is from £1,041pp with BA flights from Gatwick and transfers (prestigeholidays.co.uk).

On a budget: Eco Finca de Arrieta is a series of yurts and stone cottages with kitchenettes near the north-east coast. It’s all ‘off-grid’ with wind and solar power. Yurts are from €95 a night (lanzaroteretreats.com). EasyJet has Gatwick return flights from about £55 (easyjet.com). 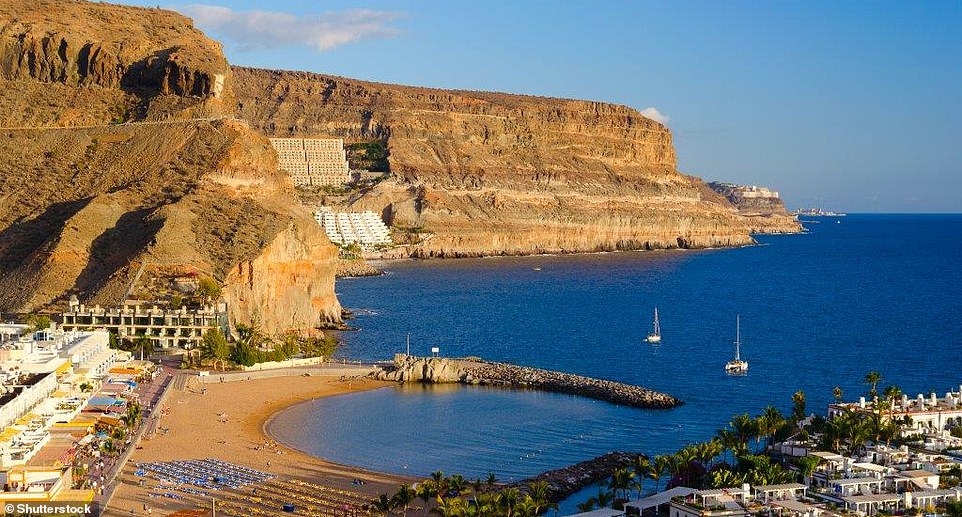 A view of Puerto de Mogan bay in Gran Canaria. The island is renowned for its sandy beaches, volcanic peaks and nature reserves

Renowned for its sandy beaches, volcanic peaks (rising to 6,400ft at Pico de las Nieves) and nature reserves, the cultural life is also vibrant if you know where to look.

Art scene: Start in Las Palmas, the capital, in the lively neighbourhood of Vegueta, where the Centro Atlantico de Arte Moderno is located. This is home to works by contemporary and late 20th Century artists and holds exhibitions (caam.net).

A little bit of history: After leaving Spain in August 1492, Christopher Columbus stopped at Gran Canaria to repair his ship before discovering the New World. He visited the island on other voyages, and Casa de Colon, a museum in Las Palmas, explains all (casadecolon.com).

Best for foodies: Overlooking Las Canteras on the north coast, La Marinera is a large, popular restaurant with sensational seafood paella, seabass with coriander, tasty fish soups, and steaks. Two courses are from about £18 (restaurantelamarineralaspalmas.com).

Blow the budget: Grand Hotel Residencia is a five-minute stroll from the dunes by Maspalomas beach. A week’s B&B with flights from Gatwick is from £1,655pp (prestigeholidays.co.uk).

On a budget: Hide away from the crowds on the coast at El Mondalon, a charming ten-room hotel with a pool in a rural location by the Monumento Natural de Bandama park. Rooms are from £90 (i-escape.com). 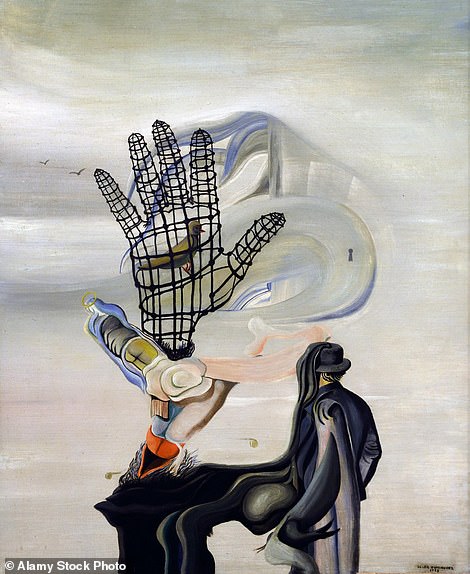 A painting by surreal Canarian artist Oscar Dominguez, which is displayed at Tenerife Espacio de las Artes in Santa Cruz

Attracting more than five million tourists a year, Tenerife is the largest Canary Island, famous for its beach resorts. But culture vultures have plenty to do, too.

Art scene: Make a beeline for Tenerife Espacio de las Artes in Santa Cruz, the capital. It’s in a striking modern building with a contemporary art gallery, photographic exhibitions and works by the surreal Canarian artist Oscar Dominguez (teatenerife.es). More works by Canarian artists, as well as 16th Century Flemish paintings, are at the city’s Municipal Museum of Fine Arts (santacruzmas.com). Also in Santa Cruz, the Tenerife Symphony Orchestra at the Auditorio de Tenerife give concerts in an amazing structure that looks a bit like the Sydney Opera House (auditoriodetenerife.com).

A little bit of history: Find out about the Guanches aboriginal community that predated the European discovery of the Canaries at the Museum of Nature and Archaeology in Santa Cruz (museosdetenerife.org). This houses ancient mummies and royal artefacts as well as fossils of giant lizards.

Blow the budget: Overlooking the sea on the south-west coast, the Ritz-Carlton Abama is a five-star hotel with two Michelin-starred restaurants, pools galore and a spa. B&B rooms cost from about £210 (ritzcarlton.com). EasyJet has return Gatwick flights from about £50 (easyjet.com).

On a budget: In the mountain village of Vilaflor, Spa Villalba is great for walkers. There are 27 rooms at this peaceful hideaway, which has a spa and heated pool. A week’s B&B is from £735pp with Gatwick flights and car hire (prestigeholidays.co.uk). 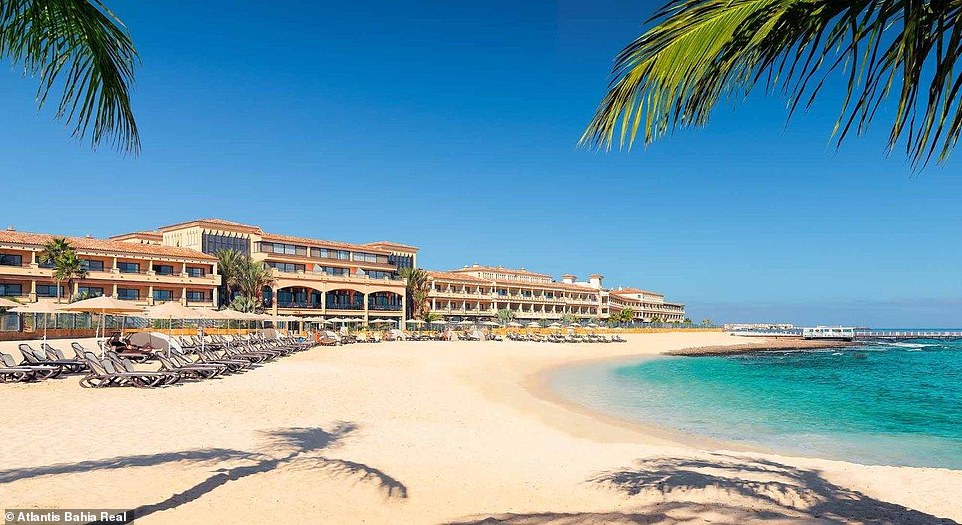 Close to the dunes of Parque Natural de las Dunas de Corralejo, Atlantis Bahia Real is a five-star spa hotel. A week’s B&B costs from £849pp including flights and transfers

Less developed than the others, it offers a gentler pace of life, plus beaches framed by sweeping dunes. It you dig about, you can discover the quiet island’s cultural side.

A little bit of history: Explore stone dwellings at La Atalayita, which date from before the Spanish Conquest (fuerteventuraguide.com).

Best for foodies: Restaurant Avenida in Corralejo has excellent grilled squid as well as lamb, pork and rabbit dishes. It’s about £18 for two courses.

On a budget: Hotel Arena Suite is in Corralejo, near the beach. All-inclusive rooms are from £100 a night with booking.com. EasyJet has return flights from about £50 (easyjet.com).