The Carr Fire, a massive blaze in northern California that claimed the lives of eight people and destroyed thousands of homes, has been fully contained, fire officials said.

The blaze started 38 days ago, on July 23, near Redding after a trailer’s tire blew out. The inferno spread quickly throughout Shasta and Trinity Counties burning 229,651 acres, destroying 1,604 structures and damaging 279 others.

The Carr Fire, the seventh largest in the state’s history, also claimed the lives of eight people, including a grandmother and her two great-grandchildren.

After more than a month of battling the wildfire, Cal Fire officials announced in a Facebook post late Thursday night that it is 100 per cent contained.

Cal Fire officials said on Thursday that the Carr Fire is 100 per cent contained. Pictured is an aerial shot of the blaze on July 30 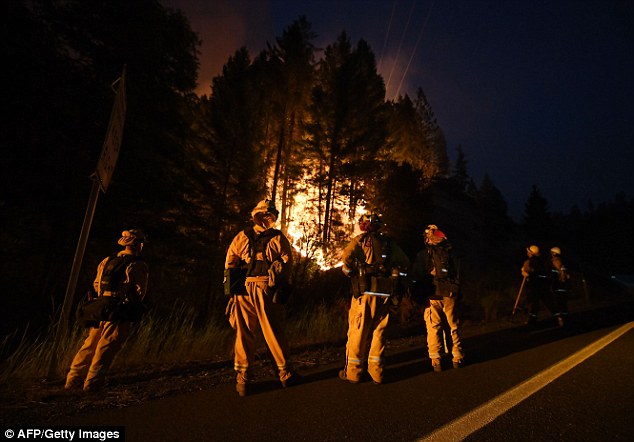 The fire started 38 days ago due to a mechanical issue on a trailer. Firefighters look on at the Carr Fire on July 30 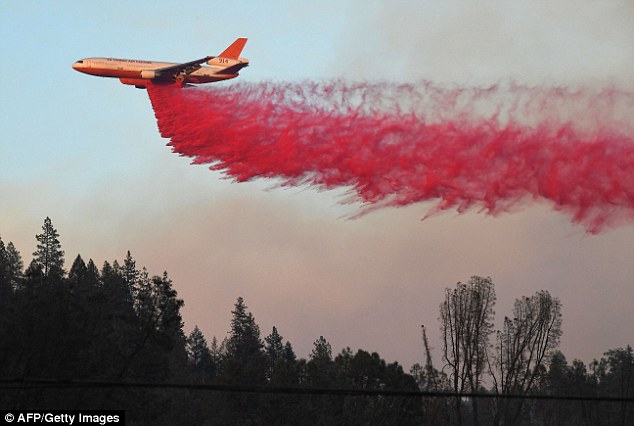 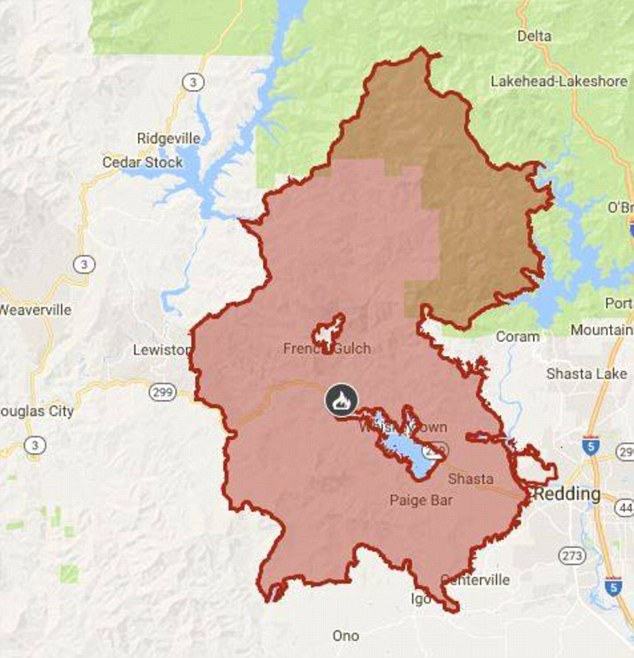 ‘We have hand lines all around it and the threat is completely out,’ a Cal Fire spokesman told the San Francisco Gate.

Officials said 456 firefighters from five crews were used to battle the massive blaze. There were three firefighter fatalities.

Bulldozer operator Don Ray Smith 81, was found dead by rescue personnel in mid-July while clearing vegetation. Officials said he was overtaken by the wildfire. Redding fire inspector Jeremiah Stoke, 37, was killed on July 26 while evacuating residents in west Redding when he was overtaken by a fire tornado, also called a fire whirl.

Cal Fire mechanic Andrew Brake, 40, was killed on August 9 when his work vehicle veered off the road around a curve and crashed into a tree. PG&E lineman Jairus Ayeta, 21, and mobile home resident Daniel Edwards Bush, 62, were also among the fatalities. Burned trees rest in a field after the Carr Fire burned through the area on July 29, 2018 in Whiskeytown 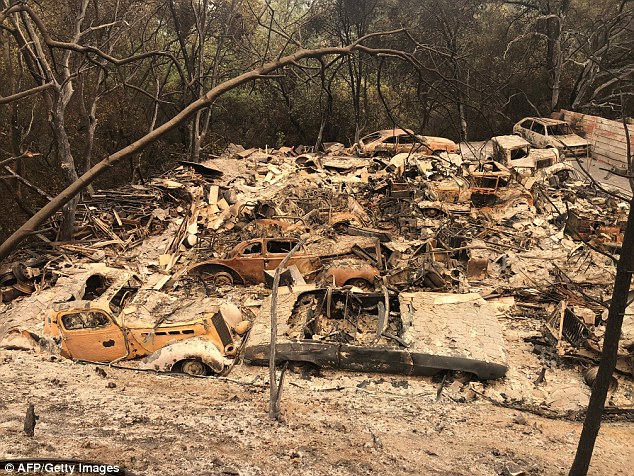 Antique cars, part of a collection, lie in rubble in a devastated neighborhood July 29, 2018 near Redding, 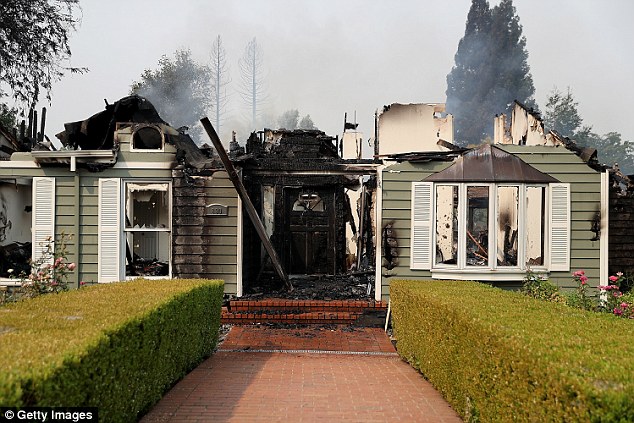 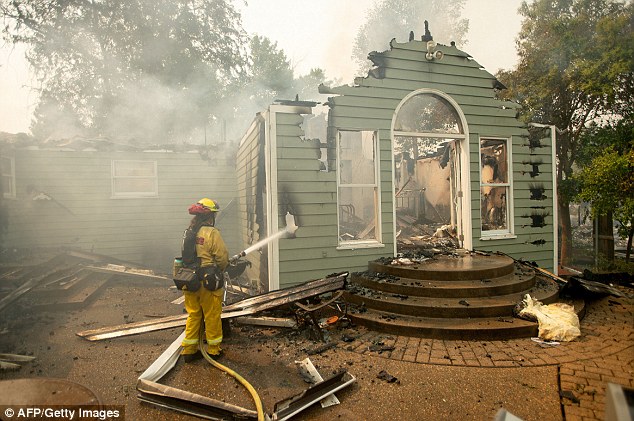 A firefighter in Redding, California puts out a fire at a home on July 27 that was destroyed by the Carr Fire

In July, fire officials announced that 70-year-old Melody Bledose and her great-grandchildren James, 5 and Emily, 4, were found dead in their Redding home. The family had spent days searching for Bledose and the children after Bledose’s husband received a frantic phone call that he needed to come home and pick them up because the fire was approaching.

Thousands of other residents had to seek shelter in churches, colleges, casinos, grammar schools and fairgrounds. The Carr Fire is said to be the sixth most destructive wildfire in California’s history.

The fire started late at night on July 23 by sparks from a flat tire on a trailer. Cal Fire officials said in a statement earlier this month that the husband and wife who own the trailer were devastated.

‘Many have been thinking and praying for this man. We learned that his wife is blaming herself for the #CarrFire, because she asked him to take the trailer in the first place. She has been crying day and night on her couch,’ officials said, urging residents to send the fire department notes and cards of encouragement they can deliver to the couple. 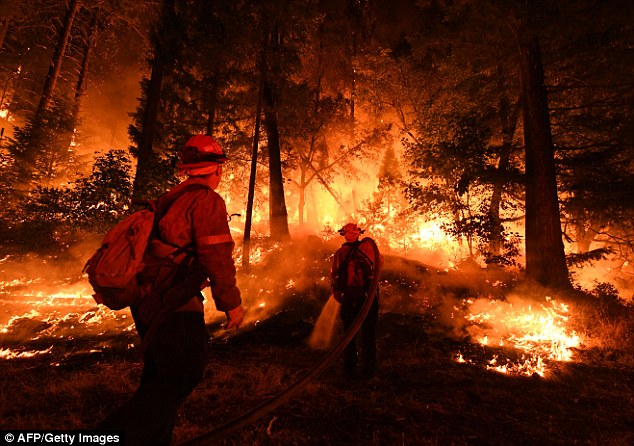 Firefighters try to control a back burn as the Carr fire continues to spread towards the towns of Douglas City and Lewiston near Redding, California on July 31 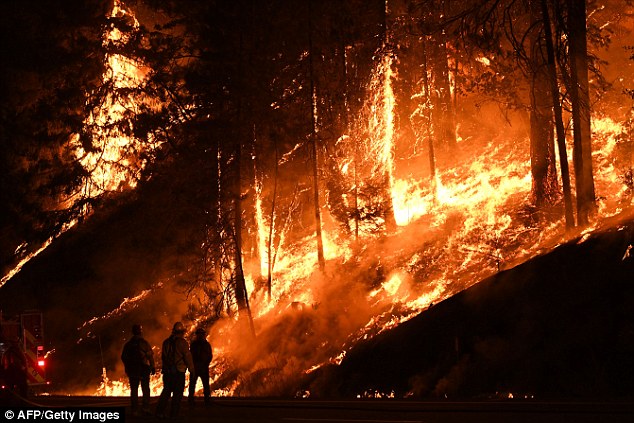 Firefighters look on as the Carr fire continues to spread near Redding, California on July 31 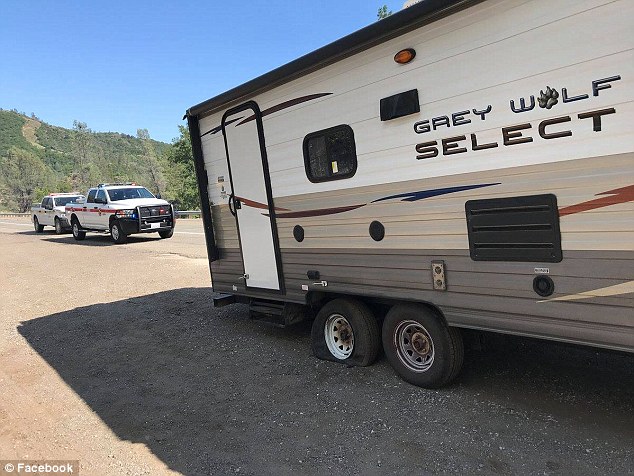 The fire was started by a flat tire on a couple’s trailer on July 23. Officials said the couple is devastated

‘We understand this was tragic for many and emotions may be varied and it be “too soon” for some. But please only message us if you have something gracious to say, perhaps as though it was your own grandma and grandpa. This may be one of our finest moments, Redding!’

The post received hundreds of comments from residents and strangers telling the couple not to blame themselves for the fire.

While the Carr Fire has been fully contained, firefighters are still battling wildfires in other parts of northern California. Late Monday, Cal Fire officials said the Mendocino Complex fire is nearing full containment, with full containment expected by September 1.

Mendocino Complex is the combination of two wildfires – the Ranch and River fires – and is the largest recorded fire in California history. In southern California, the Holy Fire was fully contained but a flare-up on Monday escaped fire lines, putting containment back at 93 per cent.