Only Fools And Horses The Musical

Unfinished by the great John Sullivan at his death in 2011, this eagerly awaited musical of the BBC sitcom has been finally realised by his son Jim and Paul Whitehouse, with song contributions by Chas (Hodges) and Dave (Peacock).

Fans can rest assured: it’s funny, and the cast impersonate the original actors to perfection.

It’s set in 1989 and the Nag’s Head pub is centre stage. Del Boy (Tom Bennett, terrific in sheepskin coat and flat cap) is flogging Leaning Eiffel Towers of Pisa to any dipstick who’ll have one. 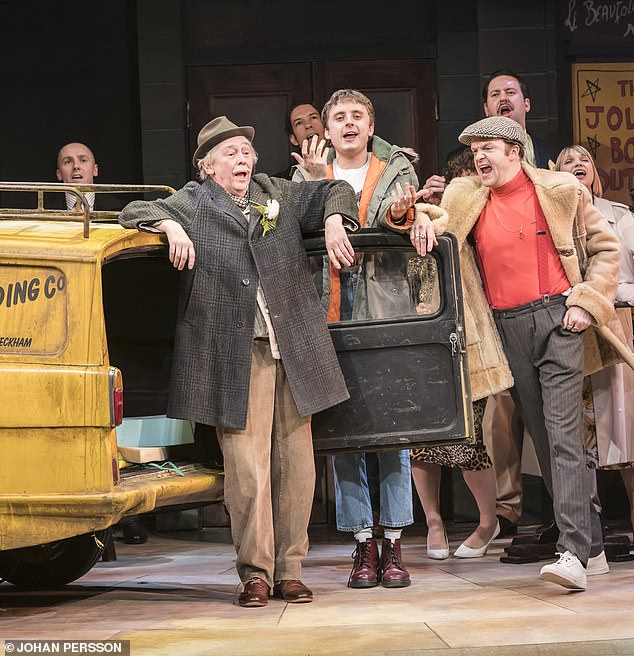 Del Boy (Tom Bennet, above right in sheepskin coat with Ryan Hutton, centre, as Rodney) is flogging Leaning Eiffel Towers of Pisa in the eagerly awaited Only Fools And Horses musical

There, the creme de menthe of Peckham (the show is stuffed with Del Boy’s mangled mange-tout French) is intact. Rodney – a great stage debut from Ryan Hutton – is going to marry Cassandra (Pippa Duffy) in a parallel plotline to Del Boy’s dates with Raquel (played delightfully by Dianne Pilkington).

Boycie (Jeff Nicholson) and Marlene (Samantha Seager) are still trying to have a baby – if only his tadpoles could swim! And Paul Whitehouse gives a pathos to Grandad with a hint of his Fast Show character Unlucky Alf.

Denzil is played by Adrian Irvine and Peter Baker pays hilarious homage to Roger Lloyd Pack in his portrait of Trigger. 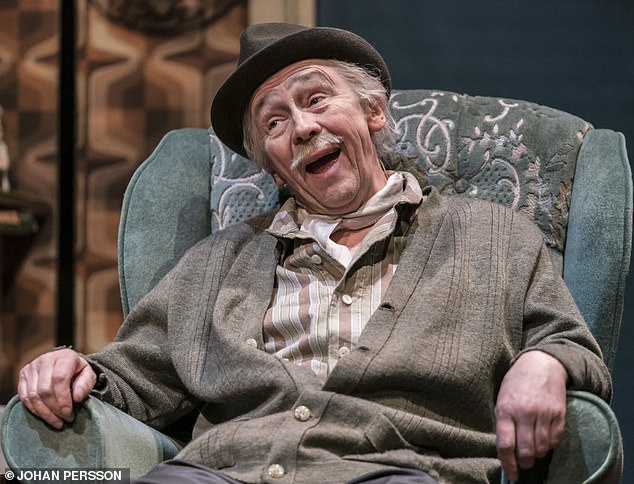 In a rambling plot, highlights such as the chandelier and the bar-flap routine are among those cherry-picked from 64 episodes, in a show that all looks very Eighties, the series’ casual sexism lending a sense of period.

Songwise it’s very mixed – and mostly bland. But Where Have All the Cockneys Gone? (the answer is Kent) is an ensemble treat, and Chas & Dave’s Margate holds up well.

David Jason was not the first choice to play Del Boy in the hit series – Jim Broadbent was initially offered the role but turned it down.

Meanwhile, Jim Sullivan’s song written for Rodney, A Bit Of A Sort, has an Oliver! feel to it.

Mick Hucknall’s Holding Back The Years is gorgeously sung by Melanie Marshall (as Mrs Obooko), but what’s it doing here? Same with Bill Withers’ Lovely Day.

As a musical, it’s all over the shop – it feels bunged together from a job lot of songs off the back of a van.

Yet the show comes with a brilliant cast, riding a wave of affection for the sitcom’s dreamers and prize plonkers.

Dolly Parton wishes y’all a happy evening via video in this re-creation of the 1980 film that starred Parton, Jane Fonda and Lily Tomlin. 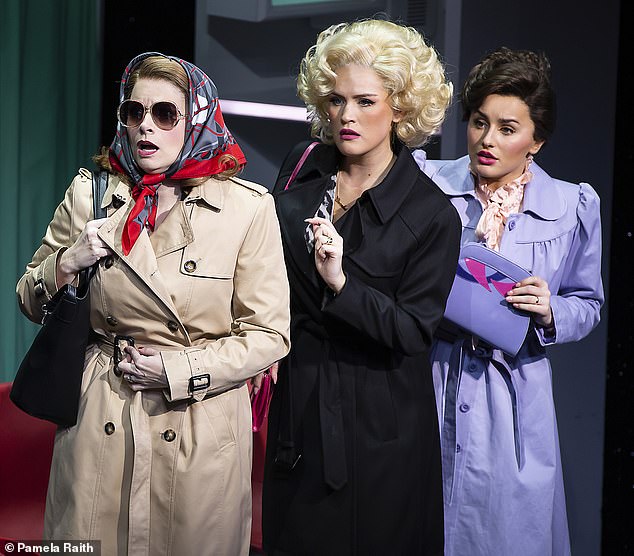 Doralee’s (Natalie McQueen, above centre) steps into Dolly Parton’s brassiere for this adaption of the 1980 film. Caroline Sheen (left) and Amber Davies (right), are excellent as her co-stars

This cheery 2008 musical adaptation for the stage (making its West End premiere) is by Patricia Resnick, who co-wrote the film, with music and lyrics by Parton. Resnick seems to have modelled it on a British pantomime, so we have the best Buttons in the business – Brian Conley – overplaying the sexist, cigar-thrusting boss Franklin Hart, on whom three female workers take revenge.

The office prig, Roz, is played by super-trouper Bonnie Langford, who can still do the splits (upside-down on a sofa) when passion consumes her. Her big number is Heart To Hart, done with full ensemble. 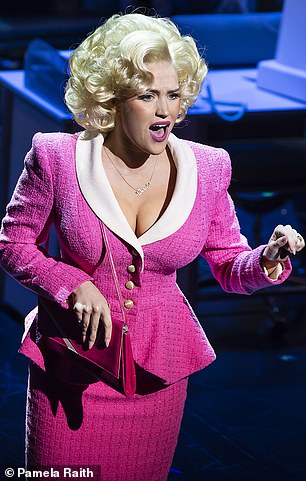 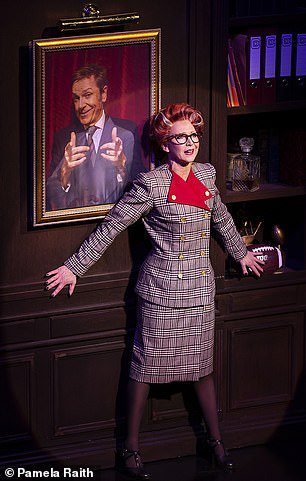 Natalie McQueen’s dim, dear Doralee has curves in all the right places while Roz the office prig is played by super-trouper Bonnie Langford (right)

The Parton character – dim, dear Doralee – is played by Natalie McQueen with curves in all the right places. Of the songs, the most Parton-like is Backwoods Barbie, for which McQueen gets Parton’s Nashville yodel pitch-perfect.

Doralee’s colleagues are played by Amber Davies (Judy) and Caroline Sheen (Violet), both excellent. They thoroughly muck in for this daft – it’s almost cartoonish – tale of female empowerment.

Sheen leads the number One Of The Boys: she’s especially good considering she stood in at the last minute because of an injury to Louise Redknapp.

But only that number and the vivacious title song really stand out. A bog-standard, rock combo West End band produces a sound that’s loud and samey. You simply can’t help missing Jolene or indeed the plaintive quality that made Parton such a good songwriter.

Jeff Calhoun’s production has crass gags and a bubblegummy vision of workplace equality.

But for all its faults, it’s still a catchily sung, thoroughly good-hearted night out for women working all hours.

Only two actors feature in this interesting American play by Tanya Barfield. It’s set in 1995 at the time of the ‘Million Man March’ in Washington DC, a mass all-male African-American demonstration.

Ray Fearon plays a grumpy mathematics professor, Lewis, who disowns his heritage and whose wife has dumped him after 25 years.

Into his gloom comes, unbidden, a visitation of three generations of his male forebears. His slave great-grandfather, his son, who was lynched for trying to vote, and then his son – Lewis’s dad – who witnessed his father’s hideous death and became an alcoholic. 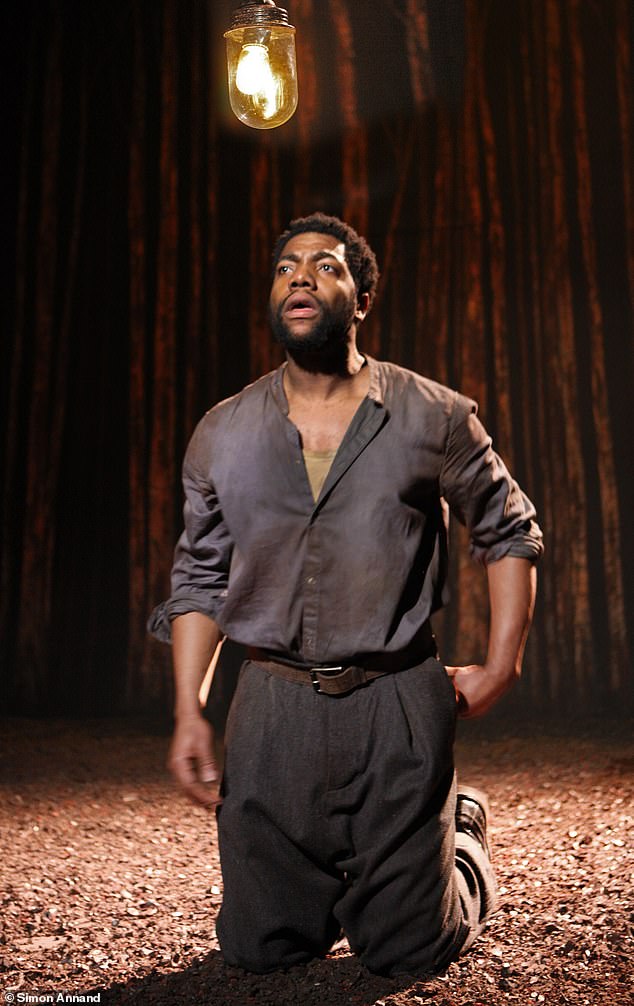 Fehinti Balogun (above) plays brilliantly three generations of Lewis’s (Ray Fearon) forebears. There are only two actors in this haunted play about the toxic legacy of American slavery

These dead characters are played, brilliantly, by Fehinti Balogun.

The material is grim as you like. But the two actors prove a tasty double act, occasionally slipping into African chant, blues and gospel. It helps to lighten this haunted play about the toxic legacy of American slavery.

Anna Washburn’s quirky Almeida production The Twilight Zone reopens in the West End in March. No surprise perhaps that this – concerning the Trump effect – also finds people scared and mystified in uncertain times.

As a group of friends talk, at great and often irritating length, stuck in a cold and dark house, their liberal complacency on Trump is exposed, particularly on racial issues.

Alongside this, the testimony of a young Kenyan man (Fisayo Akinade) adopted by white parents is telling. 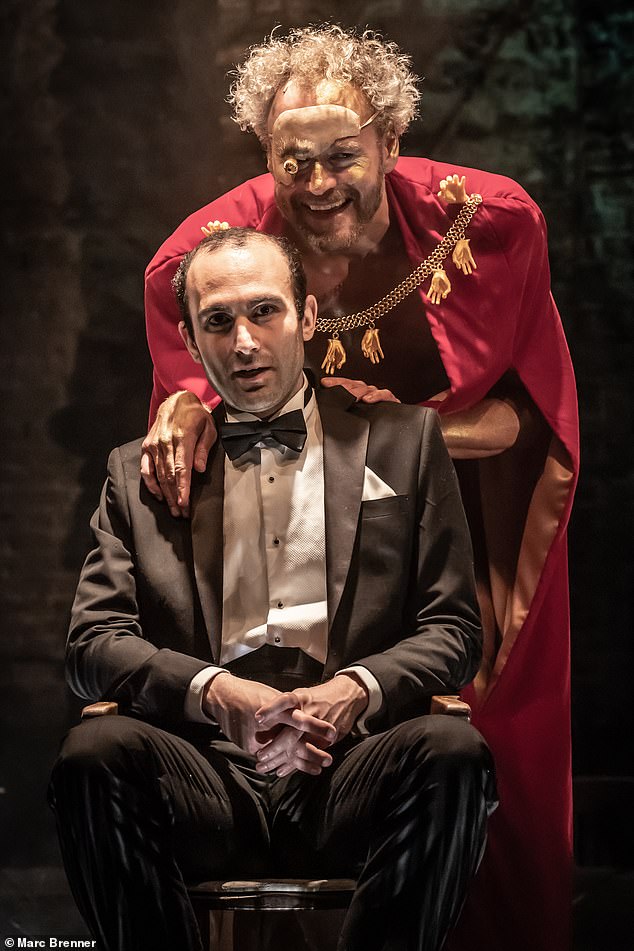 The Donald himself is incarnated, in a bizarre climatic scene, as an ancient South American deity goading former FBI director James Comey (Khalid Abdalla, above with Elliot Cowan)

The Donald himself is incarnated, in a bizarre climatic scene, as an ancient South American deity goading former FBI director James Comey (Khalid Abdalla). But Washburn – never one for the tidy option – tries to cover too much ground and the characters are on the sketchy side.

Director Rupert Goold vividly makes the most of two cartoony scenes but could have wrestled this loose baggy monster into something more coherent.