The cat with the split purrsonality! Moggie with two-tone face fathers kittens… one in each colour

The cat with the split purrsonality! Moggie with two-tone face fathers kittens… one in each colour

He’s a cat with a difference – a two-tone face with a precise dividing line that runs right down to his nose.

But there is something still more intriguing about this shorthair crossbreed.

Three-year-old Narnia has fathered two kittens that have each taken their colour from either side of his face.

Stephanie Jiminez (pictured left) owns a cat with a difference. Three-year-old Narnia (right) was born with a half-grey, half-black face, which is a very rare feature

Phoenix was born totally grey, while sister Prada is black, with a dash of white under her chin.

His breeder Stephanie Jiminez said: ‘When Narnia was born I was extremely surprised. I knew immediately that he was exceptional.

The cause of his two-tone face is unknown but other cats with this mysterious look are known as chimeras.

In male cats, this means an extra X chromosome was present at the embryo stage. 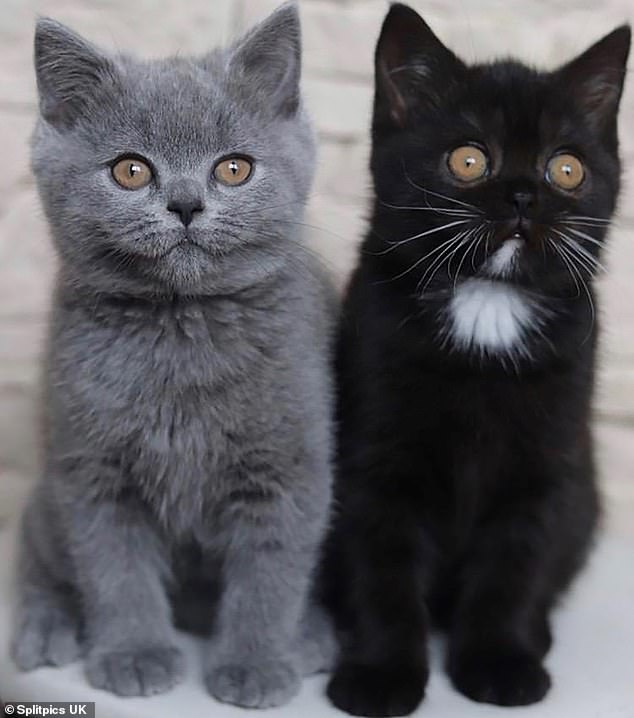 Now Narnia, has fathered two kittens that have each taken their colour from either side of his face – Pheonix (left) and Prada (right)

But Miss Jiminez, 34, said genetic testing revealed he was not a chimera. ‘A geneticist performed tests and [found] Narnia has only one DNA… there remains a mystery for science,’ she said.

Miss Jiminez, who raises purebreeds, added: ‘He also has beautiful blue eyes, which is very rare in a cat that is all black. Normally blue eyes are often found in white cats.’

Narnia, who is from Paris but lives in Britain, fathered Phoenix and Prada last year.

Phoenix has since been adopted and Prada is shortly to go to her new home.