British taxpayers have slammed councils for allowing towns and cities to be turned into rubbish dumps after Christmas.

Many areas have missed collections during the festive season, when the most amount of rubbish is produced, meaning many bins are over-flowing onto pavements and roads.

In Brighton, Justin Richmond tweeted his local council saying: ‘Rubbish on our streets is totally disgusting. I thought the whole idea of communal bins was that they are supposed to be emptied daily. This is not happening!’

Another resident of the Sussex city, Cat Fletcher, added: ‘Reports of overflowing Communal recycling waste bins across Brighton and Hove Most were full before Chrismas Day and are definitely over-capacity/contaminated now! How bad is this problem?’

Piles of rubbish were pictured today outside a Tesco in Bristol, with bundles of black sacks and old shopping bags engulfing several already packed bins.

Refuse collections in the city were suspended on Christmas Day and Boxing Day, when recycling centres were also closed.

families across the country are starting to get rid of the millions of tons of waste generated by the festivities, including an estimated 300,000 tons of card and 270,000 miles of wrapping paper

Piles of rubbish were pictured today outside a Tesco in Bristol, with bundles of black sacks and old shopping bags engulfing several already packed bins 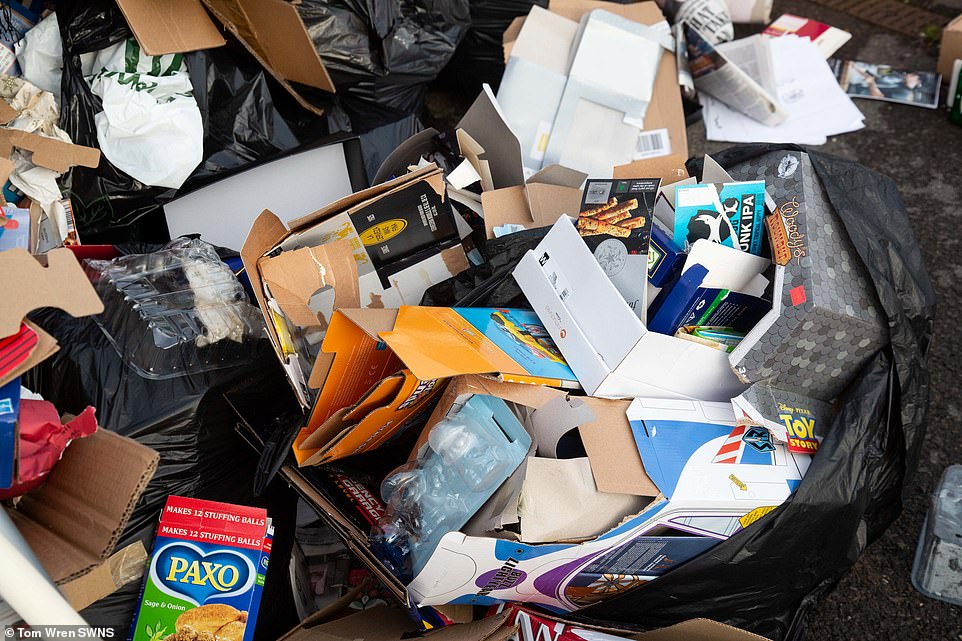 While cardboard boxes are easily recycled, not all packaging can be – and much of this waste piled outside the Golden Hill branch in Bristol today will end up in landfill 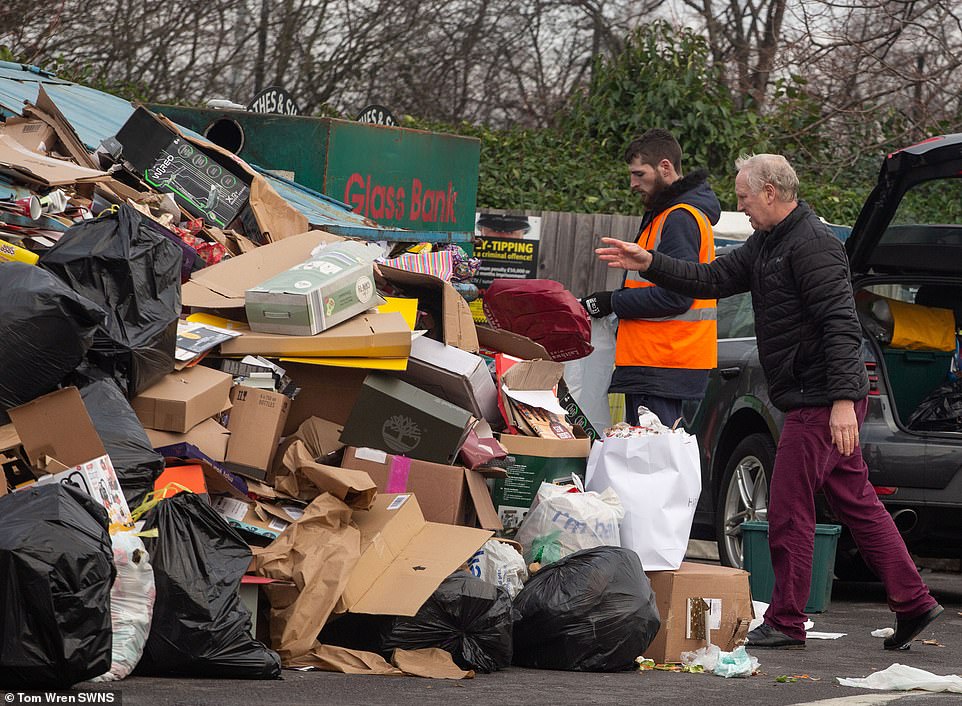 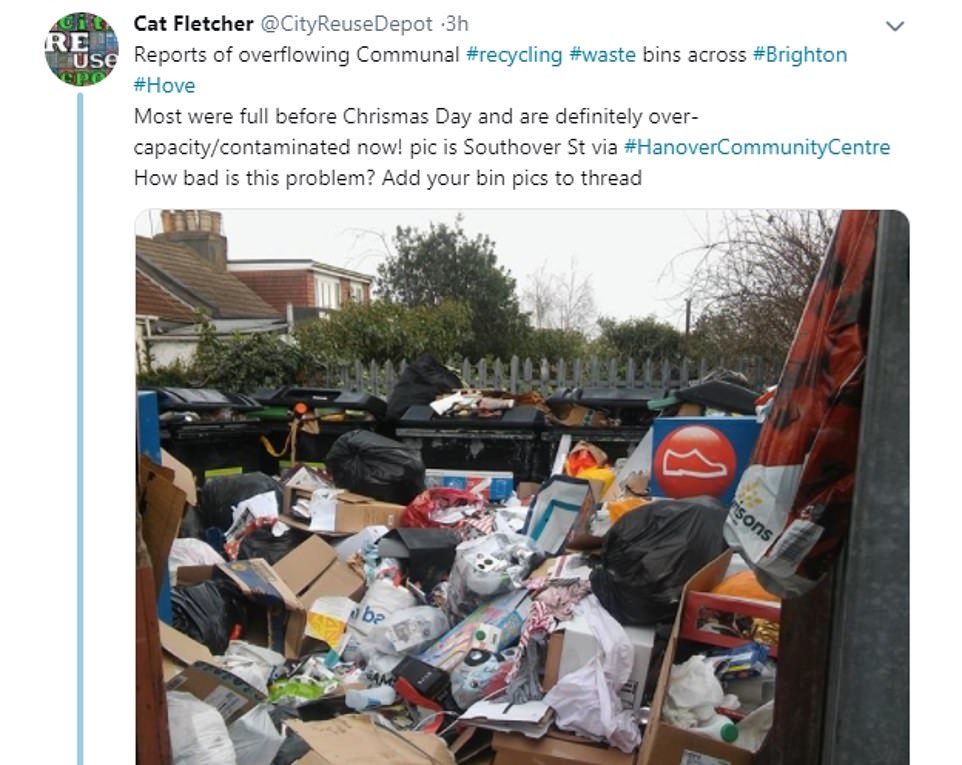 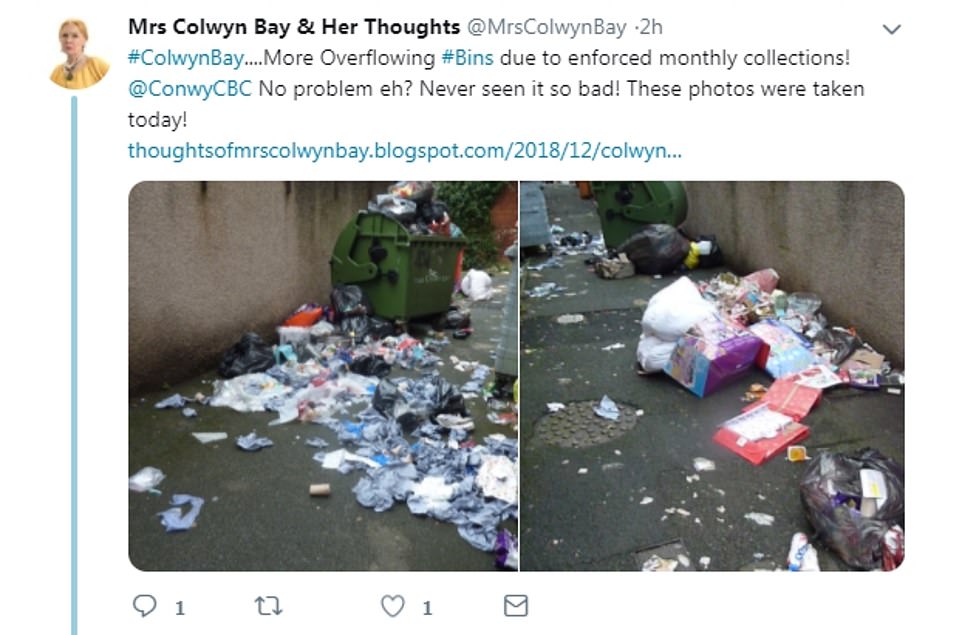 Elsewhere in the country, a resident of Colwyn Bay, north Wales wrote: ‘More overflowing bins due to enforced monthly collections! @ConwyCBC No problem eh? Never seen it so bad! These photos were taken today!’

And in Merton, south London, Phoebe Gardiner posted: ‘Happy Holidays @Merton_Council! Thanks for the lovely welcome home. Can your rubbish removal services pls do better than this.’

Researchers say Britons will throw away more than 100million rolls of wrapping paper during the festive season, while 34 per cent of adults admit they never recycle packaging or cards.

One family was shocked at how much waste was generated by their modest celebration. In fact they ended up with more than 70 leftover items of rubbish, many of them plastic.

Michael Traill, who lives with wife Claire and daughters Hannah, eight, and Sophie, four, in Aberdeenshire, said: ‘When you look at all the cardboard, paper and plastics together, it really makes you think about the impact it could have on the environment.

‘We always recycle as much as we can anyway. But a lot of the low-grade plastic the toys are wrapped in isn’t recyclable, so you’re faced with a choice – burn it on the stove or put it in the bin to go to landfill. Either way, it’s not great.’ 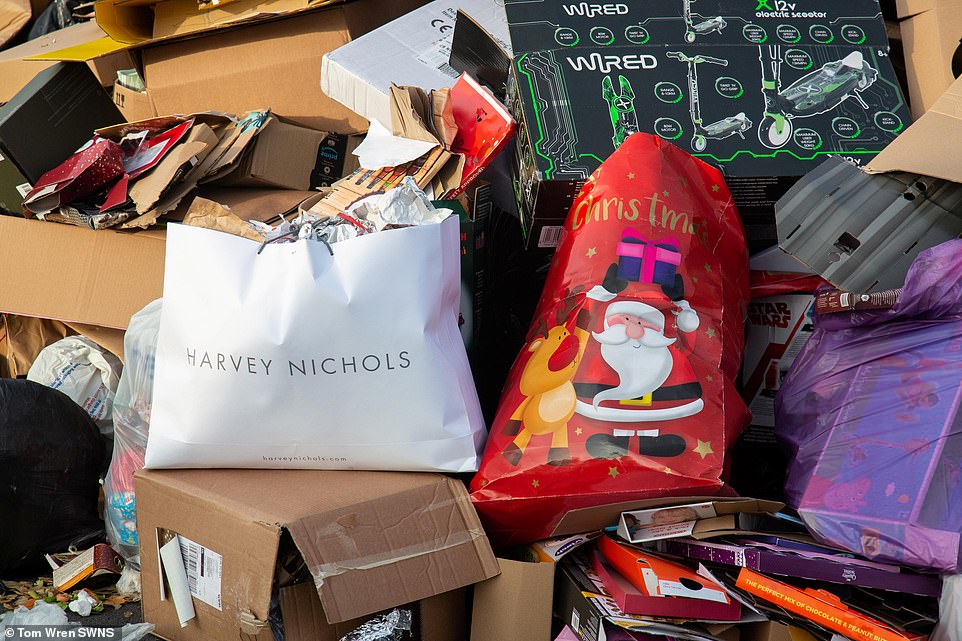 Researchers say Britons will throw away more than 100million rolls of wrapping paper during the festive season, while 34 per cent of adults admit they never recycle packaging or cards. Pictured: The recycling centre at Tesco Golden Hill 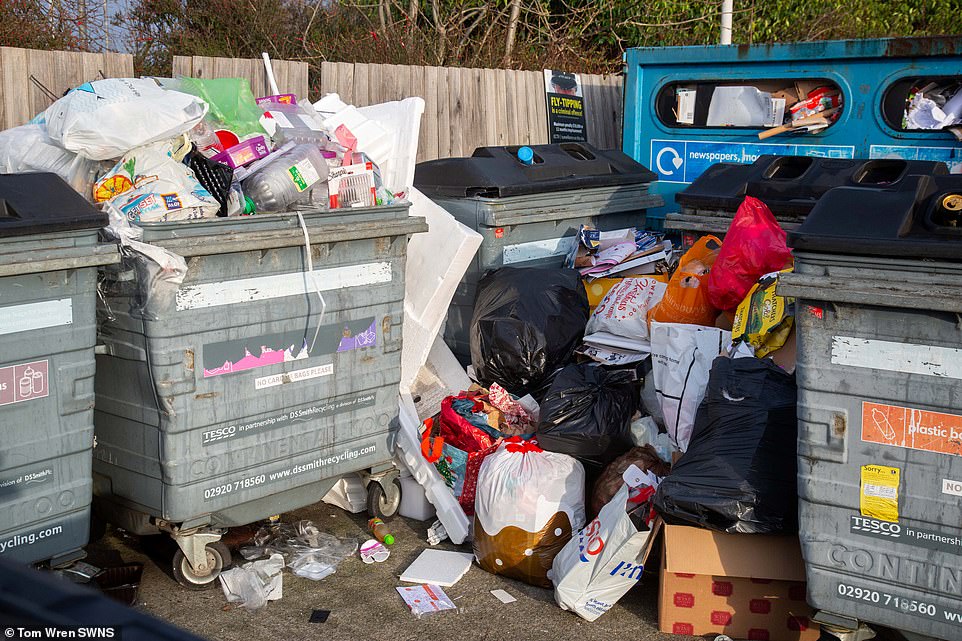 Research estimates that Britons throw away 300,000 tons of cardboard, 270,000 miles of wrapping paper and 1 billion cards after Christmas 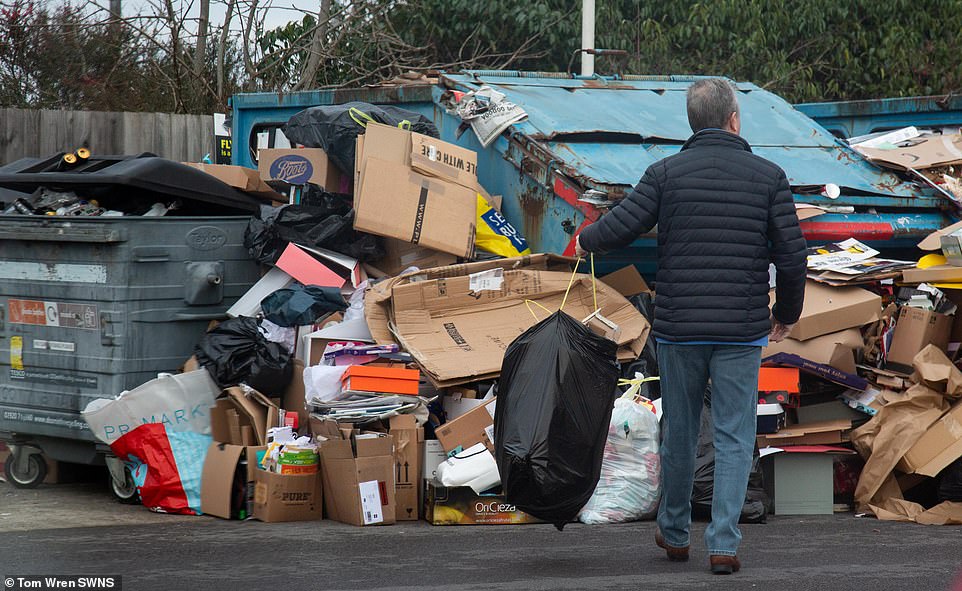 What’s going in the bin?

The couple buy recyclable wrapping paper but the 39-year-old photographer said: ‘We bought presents online and the amount of unnecessary packaging that comes with them is excessive.’

Mrs Traill said: ‘Our youngest got a jigsaw and the box was wrapped in plastic. When you opened the box the puzzle pieces were wrapped in more plastic.

‘Even our eight-year-old was shocked by the amount of cardboard and packaging we had. She’s aware of what plastic is doing to marine life and the need to recycle more, so she’s been helping to sort it all out into what’s recyclable and what’s not.

‘It’s scary to think people all over the country will have this amount of waste, and possibly a lot more.

‘As consumers it’s up to us to be more environmentally friendly and help look after the planet, but retailers also need to rethink how much packaging they use.’ 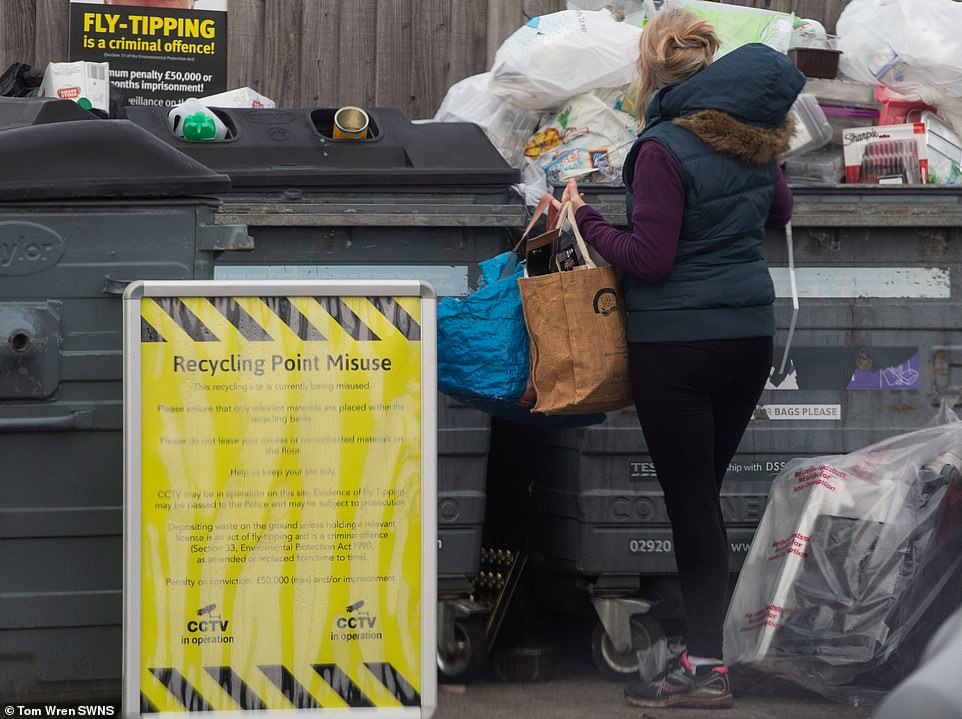 Refuse collections in Bristol were suspended on Christmas Day and Boxing Day, when recycling centres were also closed. Every year the city’s residents throw out the equivalent of 35,000 Christmas puddings 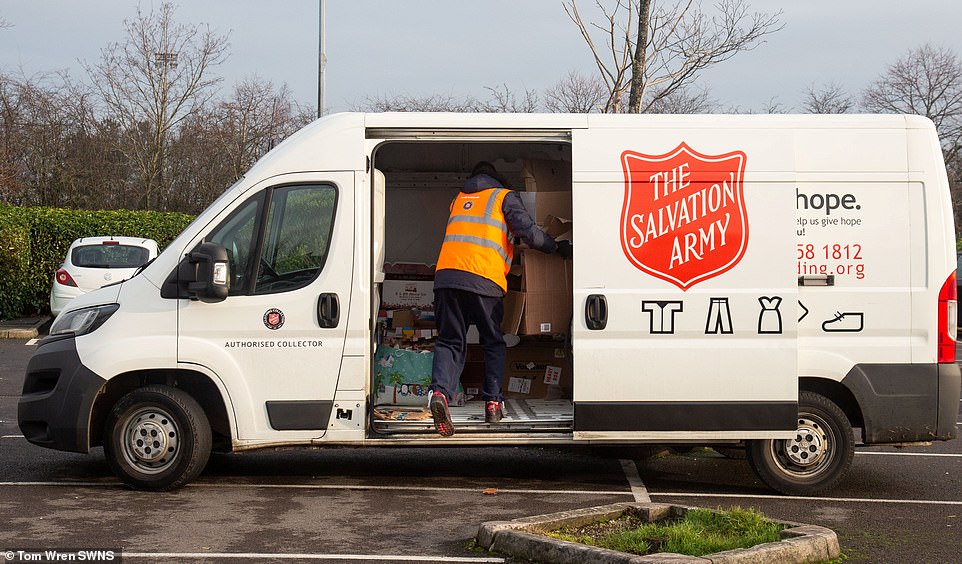 A Salvation Army worker bags up some of the rubbish. Other food waste chucked out by Bristol’s residents amounts to 14,000 turkeys and half a million mince pies 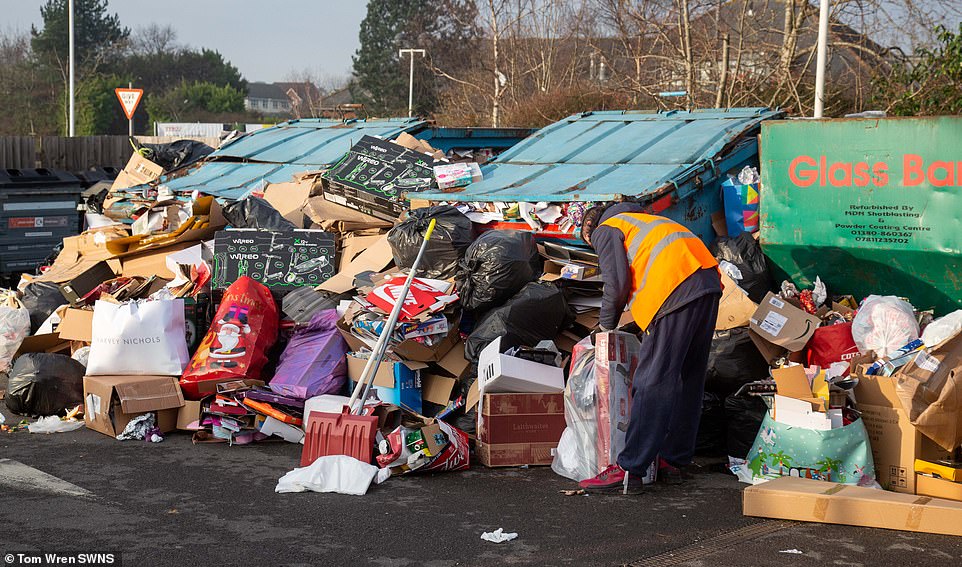 This year, more than 60 local councils have told residents not to recycle Christmas cards and wrapping paper, as the glitter and foil they contain can contaminate the recycling process