The Coat of Arms created for the Duchess of Sussex has been unveiled.

The design of the Arms was agreed and approved by Her Majesty The Queen and Thomas Woodcock (Garter King of Arms and Senior Herald in England), who is based at the College of Arms in London.

The Coat of Arms are traditionally bestowed upon royal brides in the run up to their wedding, as was seen with the Duchess of Cambridge in 2011, however, Meghan’s came after.

Her Royal Highness worked closely with the College of Arms throughout the design process to create a Coat of Arms that was both personal and representative.

The blue background of the shield represents the Pacific Ocean off the California coast, while the two golden rays across the shield are symbolic of the sunshine of the Duchess’s home state. The three quills represent communication and the power of words.

The Coat of Arms of the Duchess of Sussex has been unveiled, including subtle nods towards Meghan’s native California

Beneath the shield on the grass sits a collection of golden poppies, California’s state flower, and wintersweet, which grows at Kensington Palace.

The Supporter relating to The Duchess of Sussex is a songbird with wings elevated as if flying and an open beak, which with the quill represents the power of communication.

A Coronet has also been assigned to The Duchess of Sussex. It is the Coronet laid down by a Royal Warrant of 1917 for the sons and daughters of the Heir Apparent. It is composed of two crosses patée, four fleurs-de-lys and two strawberry leaves. 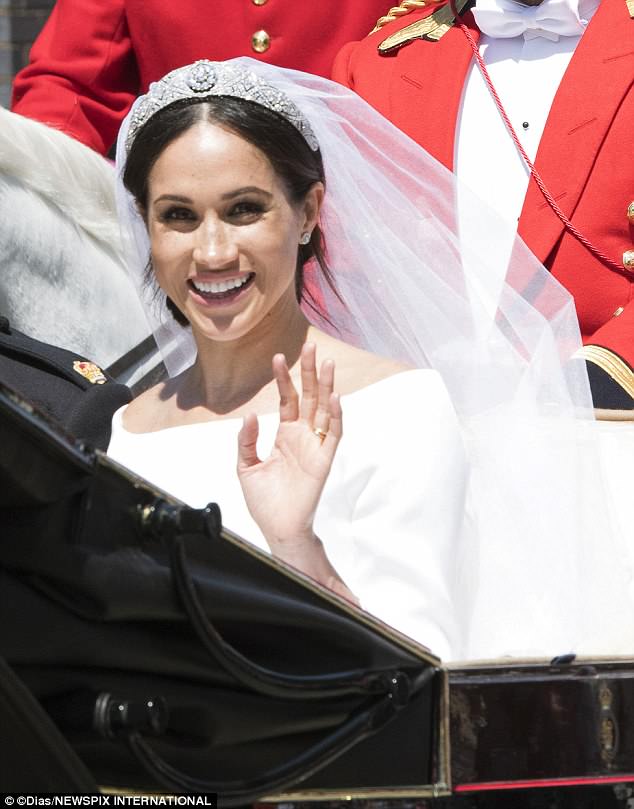 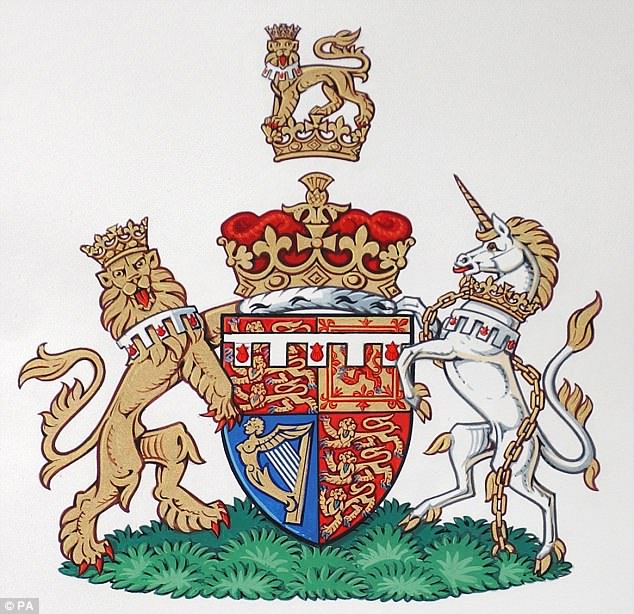 Prince Harry’s coat of arms, which was unveiled on his 18th birthday in 2002, also features a lion  as a ‘supporter’, it is customery for wives of the royals to have one of their husband’s supporters on their crest

The arms of a married woman are shown with those of her husband and the technical term is that they are impaled meaning placed side by side in the same shield.

Thomas Woodcock, Garter King of Arms said: ‘The Duchess of Sussex took a great interest in the design.

‘Good heraldic design is nearly always simple and the Arms of The Duchess of Sussex stand well beside the historic beauty of the quartered British Royal Arms.

‘Heraldry as a means of identification has flourished in Europe for almost nine hundred years and is associated with both individual people and great corporate bodies such as Cities, Universities and for instance the Livery Companies in the City of London. ‘ 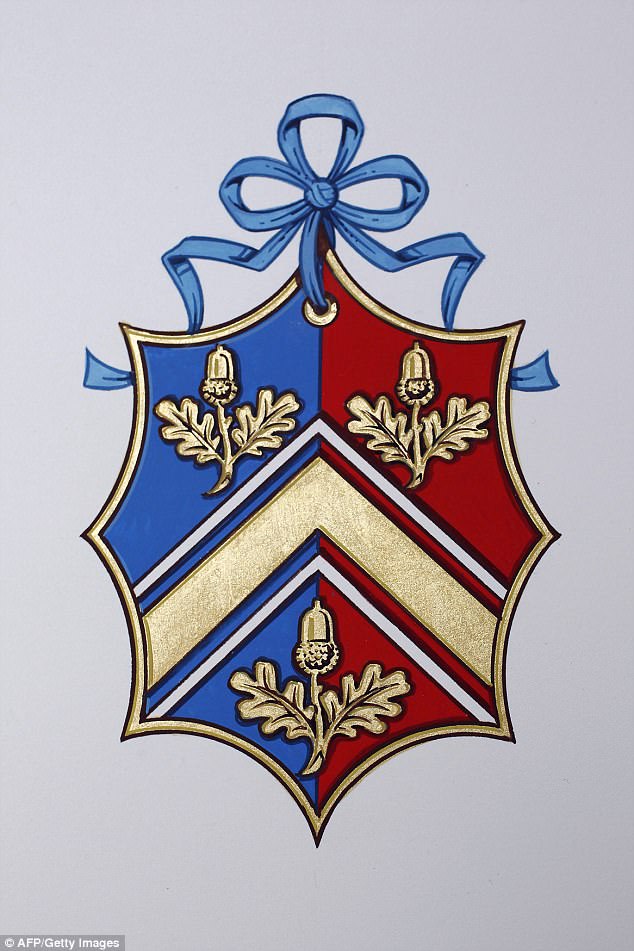 Meghan’s Coat of Arms suggests an air of independence in comparison to the Duchess of Cambridge’s in 2011.

Before her wedding to Prince William, Kate’s family was awarded the crest, rather than the royal bride alone.

Although Kate was entitled to apply for a heraldic design in her own right, it was her father, Michael, who actually entered the petition.

This gives his entire family – including his other children, Pippa and James, as well as wife Carole – the right to use the emblem.

The design is simple, with three leafy acorns representing each of the couple’s three children – an idea suggested by Kate herself.

Acorns were chosen for the analogy that they grow into great oaks. Oak is also a symbol of England and strength, and West Berkshire, where the children were brought up, has many oak trees. 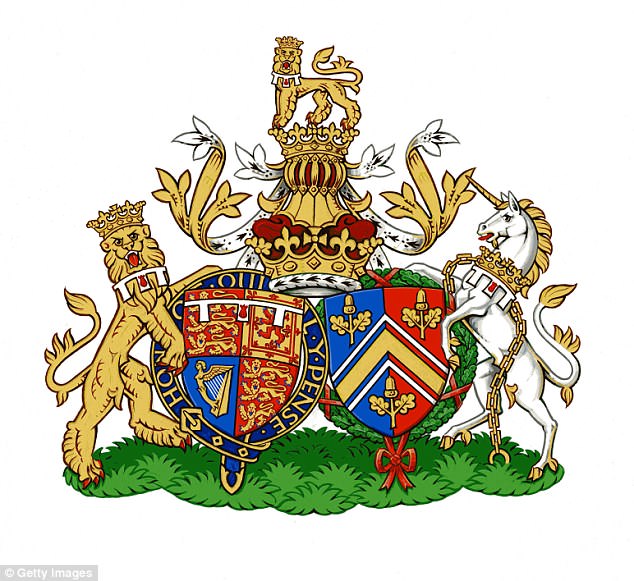 Two years after they were married The Duke and Duchess of Cambridge had a joint Coat of Arms created, known as a Conjungal Coat of Arms

Two years after their wedding the Duke and Duchess of Cambridge had a joint Coat of Arms created, known as a Conjungal Coat of Arms.

Acorns were chosen for the analogy that they grow into great oaks. Oak is also a symbol of England and strength, and West Berkshire, where the children were brought up, has many oak trees.

In the centre of Kate’s emblem is a gold chevron representing the Duchess’s mother, Carole, at the heart of the family. Her family name was Goldsmith.

The two thin white chevrons on either side indicate, remarkably, the family’s love of skiing and mountains, while the background colours of red and blue were chosen as they are the principal colours of the flag of the UK and match William’s own shield.

William’s design is a version of the Royal Coat of Arms which was granted to him by the Queen on his 18th birthday.

It shows the various royal emblems of the United Kingdom: the three lions of England, the lion of Scotland and the harp of Ireland.

It is surrounded by a blue garter bearing the motto Honi soit qui mal y pense – Shame to those who think evil of it – which symbolises the Order of the Garter of which he is a Knight Companion.

Both shields are supported by the Duke of Cambridge’s ‘supporters’ – a royal lion and unicorn, each wearing a three pointed collar, known as a label.

The label has a red scallop shell derived from the Spencer coat of arms, which has been used by the ancestors of Princess Diana for centuries.

Flowing out from the top of the Conjugal Coat of Arms is ‘mantling’, which represents the slashed cloth hung around the necks of knights fighting in the heat of the Middle East during the Crusades.

HOW DO YOU GET A COAT OF ARMS?

Coats of Arms came into being during medieval tournaments like jousting when knights would be recognised by the motifs on their shields or helmets and heralds quickly learnt the different ones in use, taking up responsibility for the control of their use.

Their use declined in competition and battle but they became more widely used in society.

The arms are given for free while the money people pay is for the research and design of the coat of arms.

However, that doesn’t mean that just anybody can pay the fee and get a coat of arms. The cumulative knowledge of the Earl Marshal gathered over hundreds of years has given them the skill of tactfully suggesting that people don’t proceed with their application.

The late Peter Gwynn-Jones, a former Garter King of Arms, once said: ‘In practice, eligibility depends upon holding a civil or military commission, a sound university degree or professional qualification, or having achieved some measure of distinction in a field beneficial to society as a whole.’