The correct way to polish off a Creme Egg revealed

A Cadbury’s worker has revealed the correct way to eat a Creme Egg – and it involves licking out the filling.

Shaheed Khattak, a systems maintenance engineer at the Cadbury factory in Bournville, Birmingham, said you firstly have to bite off the top of the popular chocolate treat.

He explained that you then have to eat out the centre, before eating the rest of the shell on its own.

Speaking to the HuffPost, Shaheed said: ‘Who are these people out there eating them whole? You’re asking for death by Creme Egg.

‘You have to bite the top, eat out the centre and then eat the shell on its own. Obviously.’

He also revealed that the Creme Egg production line takes up two entire floors of the Cadbury’s factory in Bournville.

Creme Eggs are only available to buy from January to Easter each year, despite being produced all year round.

It comes after there was a fierce debate over the pronunciation over Creme Egg, which began when fan tweeted them to ask whether it should be pronounced ‘cream’ or ‘crem’. 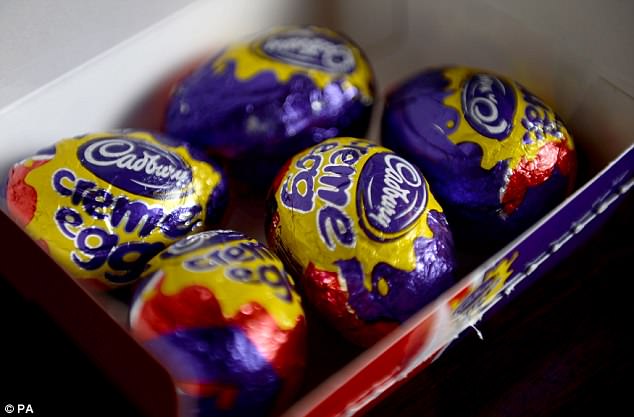 The Cadbury UK Twitter account caused an uproar when they replied with ‘crem’, adding a smiley face for good measure.

But just hours later, following an influx of angry messages from chocolate fans, the manufacturer retracted its guidance, claiming it had in fact been a typo.

Cadbury explained at the time: ‘We thought we’d avoid stepping on eggshells & come clean! We accidentally missed the “a” out when explaining how to pronounce Creme Egg! Don’t worry, it’s ‘Cream’ egg’.

They added: ‘Don’t worry! Sometimes our eggcitement gets too much and our letters get scrambled.’