The courageous picture that proves not all disabilities are visible

You could easily forgive 28-year-old Hannah Witton if she chose to shy away from any publicity about ulcerative colitis, given what the disease has done to her body.

Three years ago, the London-based YouTube blogger and author had a procedure to be fitted with a stoma bag, an attachment that plugs into her abdomen, collects all the digestive waste from her body and needs emptying regularly.

It was required because Hannah’s condition had damaged her system to such an extent she had to have surgery that left her unable to use the lavatory in the way most of us take for granted.

But she has proudly put her stoma bag on show as part of a major new campaign challenging the way the public perceive sufferers of ulcerative colitis and Crohn’s disease – lifelong conditions that can cause diarrhoea, stomach cramps, fatigue, weight loss and anaemia.

Hannah Witton, 28, has proudly put her stoma bag on show as part of a major new campaign challenging the way the public perceive sufferers of ulcerative colitis and Crohn’s disease

The campaign, by the charity Crohn’s & Colitis UK, is called Not Every Disability Is Visible and aims to educate the masses on why sufferers often need immediate access to toilets reserved for ‘disabled’ people.

It follows claims by some sufferers that they face abuse and intimidation when they use disabled loos in an emergency from passers-by who question whether they really are disabled.

A poll carried out by the charity revealed 60 per cent of Crohn’s and colitis sufferers have experienced verbal or even physical abuse. The charity wants all disabled toilets to be renamed ‘accessible toilets’, to reflect that not all users have obvious ailments.

More than 80 per cent of sufferers said they would feel more comfortable using toilets billed as ‘accessible’.

Such signs have already been installed in nearly 3,000 shops and supermarkets and 15 travel hubs, including railway stations.

Hannah and three other people have volunteered to feature in a poster campaign illustrating how Crohn’s and colitis sufferers who appear to be in perfect health are anything but.

The top half of Hannah’s image depicts her waving her arms, as a broad smile lights up her face. But the bottom half clearly shows the stoma bag she must wear 24 hours a day to handle a task most of us hardly think twice about. 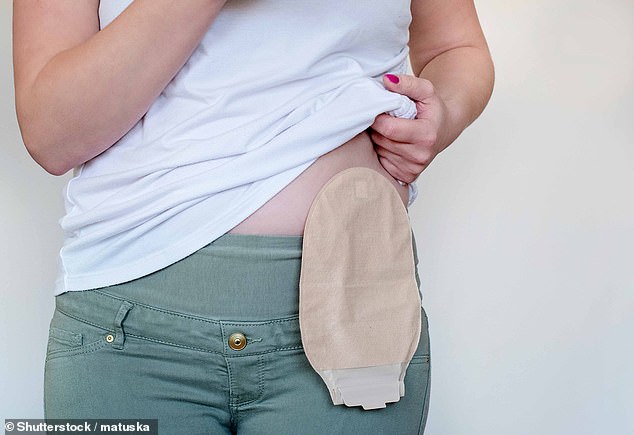 A stoma bag allows faeces or urine to be collected in a bag on the outside of your body. Ulcerative colitis and Crohn’s disease are lifelong conditions that can cause diarrhoea, stomach cramps, fatigue, weight loss and anaemia

Hannah says it’s a constant battle changing the bag in public toilets, while many venues have low lighting in bathrooms. She says: ‘Once I had to manage with just my phone light – holding it in my mouth.’

Fellow volunteer Ben MacFarlane, a 39-year-old father- of-two who regularly goes to the gym, looks in the peak of fitness but has suffered agonising Crohn’s disease for 20 years.

His image shows him pumping iron in one half of his picture but unable to leave the toilet on the other – an indication of his uncontrollable bowel movements. ‘My son sees me as this big strong gym-going man, not someone in a toilet, crying in pain,’ says Ben.

Sarah Sleet, chief executive officer at Crohn’s and Colitis UK, says: ‘We know that if the public better understand the devastating symptoms of these conditions, they will be more considerate and supportive of people who feel ashamed or embarrassed.’

An estimated 146,000 people in the UK have ulcerative colitis, where the inner lining of the colon becomes inflamed and ulcerated. A further 115,000 or so suffer from Crohn’s disease. 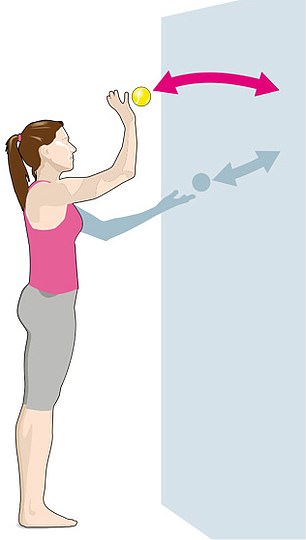 Follow this five-step process, focused on throwing and catching, to build stronger shoulders

Try this: Throw and catch, for stronger shoulders

Of all the bones and joints in the body, the shoulders – due to their surprisingly delicate structure – are the most prone to injury. Thankfully, it’s easy to bulletproof the joint with a simple throw-and-catch exercise performed every other day.

1. Stand facing a wall, two steps back from it.

2. Using one hand, hold a light medicine ball or tennis ball above your head, keeping your elbows soft and shoulders straight.

3. Start to throw it against the wall and catch it. Do this for one minute.

4. Lower the arm by your side so your hand is in line with your shoulder while throwing and catching for one more minute.

5. Raise the arms back to starting position and continue for a further minute. Repeat with the other arm.