The Covid toll on older workers: 30% of the 1.3million on furlough fear being SACKED when it ends

The Covid toll on older workers: Over-50s more likely to have had their hours cut while 30% of the 1.3million on furlough fear being SACKED when it comes to an end

The economic impact of the coronavirus lockdown on older workers was laid bare today by new figures showing those over 50 were more likely than younger workers  to have their hours cut.

Some 1.3million people in that age group have been furloughed, according to the Office for National Statistics (ONS).

And three-in-10 of them fear for their long-term job prospects, with around 400,000 saying there is a greater than 50 per cent chance they will be sacked when the scheme comes to a halt.

The ONS data suggests they have suffered because the jobs they have have been badly hit by the pandemic shutdowns. 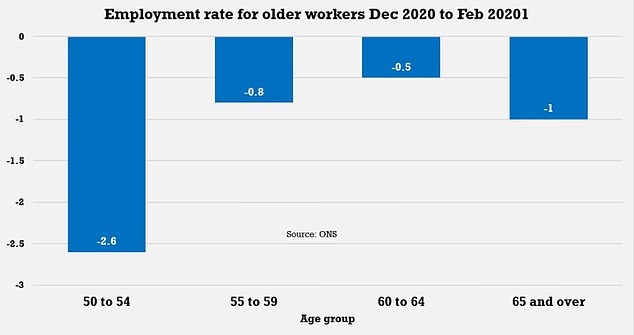 The ONS reported a fall in employment among those aged over 50 between December and February, driven mainly by the 50-54 and over 65 age groups.

Additionally the proportion reporting themselves as being self-employed among the over-50s fell by 2 per cent to 19.4 per cent, with an increase in the proportion becoming employees to 80 per cent.

But almost 200,000 people could have been added to the nation’s unemployed, with the ONS noting: ‘The fall in the number of self-employed aged 50 years and over was larger than the gain in the number of employees, leading to an overall seasonally adjusted net loss of 193,000 older workers (down from 10.7 to 10.5 million).

‘We must recognise the immediate and longer term impact this will have if we don’t take action. The over-50s represent a third of our workforce and yet often, due to their age, they will find it much harder to re-enter the workforce.

‘Job losses amongst the over-50s represents a significant loss, both to our economy and to their own later life financial security, with one-in-eight workers over 50 having changed their retirement plans as a result of the pandemic.

‘We are at risk of a large group of people experiencing serious long term pension poverty when you consider that the cost to an average male earner retiring at age 55 instead of 65 could be around £280,000 in lost employment income and a reduction of private pension pot by 55 per cent.’