The craziness of a Brilliant Mind 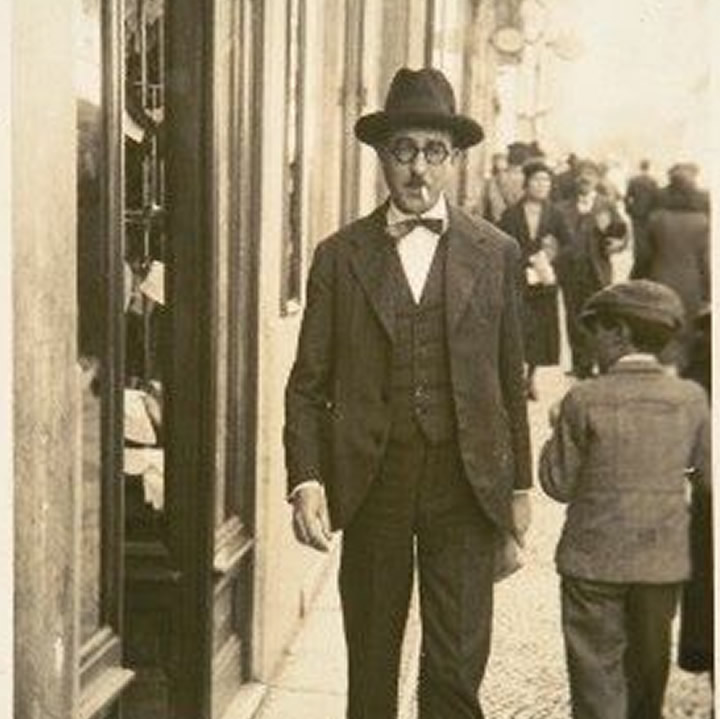 Some artists in the early centuries were called crazy because of their exuberant expression and creativity, but maybe they had indeed some sort of mental disease never diagnosed during their life. What we have now are theories to analyze their work.

Fernando Pessoa, a Portuguese poet, publisher, and philosopher in the early 20th century, created the literary term “heteronym”, which stands for an author writing outside his/her own personality. Pessoa had given life to over 70 heteronyms, a fact that indicates a multiple personality disorder.

Fernando Pessoa was born and died in Lisbon, Portugal (1888-1935), but he was actually raised in Durban, South Africa, where he became fluent in English and French. After his father’s death, his mother remarried the Portuguese consul of Durban, a British-governed town.

For a seven years old kid, probably was not easy to move to another country, with a different language and culture; and this event was an important milestone of Pessoa’s childhood because it is when there is a register of his first work, he wrote a poem to his mother called “To My Dear Mother”, expressing his feelings about moving from Lisbon to Durban.

Pessoa was a specimen student, fascinate by authors philosophers as Shakespeare, Horace, John Keats, and Edgar Allan Poe. His former classmate, Clifford Geerdts, said that Pessoa was inclined to avoid association with the other students, a matter that can be related to a mental disorder or either a very sheepish kid.

Pessoa returned to Lisbon to attend the University in 1905, when he began to write poems and short stories, some of them under the pseudonym “David Merrick”, more often in English and French than Portuguese at that moment.

Fernando Pessoa had never got married or had kids, and lived his entire adult life in a rented bedroom or with familiars; he did not finish University or had a regular career, he worked as a translator and bookkeeper for a couple of years. Besides his active participation to introduce modernist literature to Portugal, his work became acclaimed after his death (Ciuraru).

As Carmela Ciuraru says in her article “Fernando Pessoa & His Heteronyms”, “You will never get to the bottom of Fernando Pessoa. There are too many of him.” There is no record affirming for sure how many heteronyms Pessoa had created, but the number is over 70, some researchers’ say 72, others 78, and other ones say that there are even more than 100.

We might never be able to know for sure how many different heteronyms Pessoa had created, but the idea that he did is monumental. He did not sign his work with a different name as many authors do, which is called pseudonym – a name that someone uses instead of his or her real name, esp. on a written work – (pseudonym – Cambridge Dictionary, n.d.).

What the author Fernando Pessoa had done indeed, was an entire biography created for each of his heteronyms, giving a complete and different writing style for each of them. Among all the heteronyms created by Pessoa, there are 3 of them that the literature has been highlighting: Alberto Caeiro, Ricardo Reis, and Alvaro de Campos.

Pessoa would not hide his heteronyms, contrariwise, he would introduce his friends to his heteronyms as they were real people, and even exchange letters with them. Pessoa himself wrote a letter in 1935 trying to explain the reason why he had given life to so many heteronyms.

I start with the psychiatric part. The origin of my heteronyms is the bottom line of the hysteria that exists inside me… Since I was a child, I had the tendency to create a fictitious world around me, to surround myself with friends and acquaintances who had never existed. (I do not know, indeed, if they did not really exist, or if I do not exist.

In these things, as in everything, we should not be dogmatic.) Since I know myself to be what I call myself, I remember to mentally need, in figure, movements, character, and history, various unreal figures that were to me as visible and mine as the things of what we call, perhaps abusively, the real-life… (Pessoa, 1935)

Pessoa’s letter, written in 1935, evidence his intricate state of mind, what would be described as a mental disorder. According to the National Institute of Mental Health, Personality Disorders represent an enduring pattern of inner experience and behavior that deviates markedly from the expectations of the individual’s culture (Mental Illness, n.d.).

Looking to Pessoa’s frame would be plausible to say that he had Dissociative Identity Disorder, once he was not only creating all of those personas but also externalizing them.

The fact that the Portuguese poet, publisher, and philosopher Fernando Pessoa, had created over 70 heteronyms during his life, indicates some kind of mental disorder, even though he was never diagnosed during his life. For many years our society would prefer to do not to talk about mental disorders and just categorized all of them in only one box named “crazy”.

However, inside the mental health field, there is a long list of possible diseases. Back in the early 20th century, Fernando Pessoa would have been called crazy by someone, when actually his brilliant mind was creating all the heteronyms to keep him stable and sane because he was expressing his multiple personalities through his papers.

Nowadays, with the medical advances around Mental Illness, perhaps Fernando Pessoa would be diagnosed and be able to have a normal adult life, without so much haziness and delusions about himself. On the other hand, if that scenario were possible back in the day, we would not have all of his work to admire.

His Dissociative Identity Disorder along with his brilliance, merged in a beautiful result because they allowed Pessoa to create an amazing literary collection, which confirms the quote wrote by himself: “Everything is worthwhile if the soul is not small”.