Where to start? The bonkers story of Ian Bishop’s appearance at a world series poker final in Las Vegas? That can wait. So can the dead body we see during our evening together. That was sobering.

For now, though, the former West Ham and Manchester City midfielder is sitting on an ornate sofa in his Florida apartment, the backdrop a stunning Union flag wall design that, remarkably, he painted himself. Oh, and his pet cockatoo, Charlie, is perched on his arm.

Earlier, over a few beers as the sun set on Palm Beach County, he shared a grizzly picture from last year of his upper lip ripped in two. The perpetrator? Charlie. The wound explains the moustache and goatee he now wears.

‘It’s a bit love-hate — I love him, he hates me,’ says the 54-year-old, before giving the bird a kiss, albeit tentatively. ‘Do you want to hold him?’ I’m good, thanks.

Charlie takes flight, circles and lands, all the while chatting away to himself. It is a magnificent sight, if entirely unnerving. ‘He’s harmless when he’s on the floor, he won’t hurt you.’

I’d prefer him in the cage. Charlie is back behind bars and his night blanket draped over. There is a hole he has pecked to keep watch. Thankfully, Charlie doesn’t have a taste for canvas, for Bishop’s artwork is truly impressive.

He produces a painting of Winston Churchill in front of a moonlit sea. ‘That’s all from in here,’ he says, tapping his temple. ‘Ever since I was a kid, I just had a talent for it.’

The artist in him explains a lot about Bishop the player; an elegant, two-footed playmaker who deserved England recognition.

‘From four years old I was going to be a footballer. I don’t even remember if I was left or right footed. I was the slowest player you’d ever seen, so I had to compensate and use my brain. I played holding midfield but really, I was a No 10 before No 10s were fashionable.’ 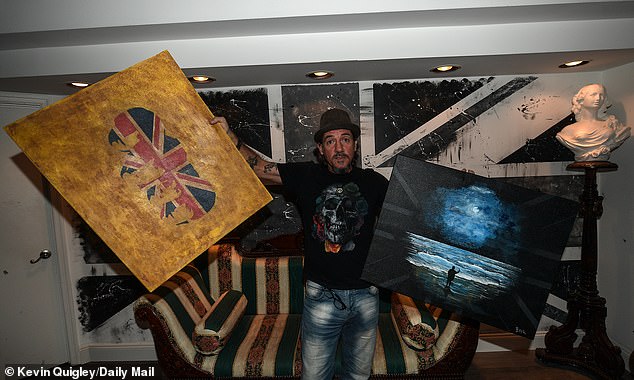 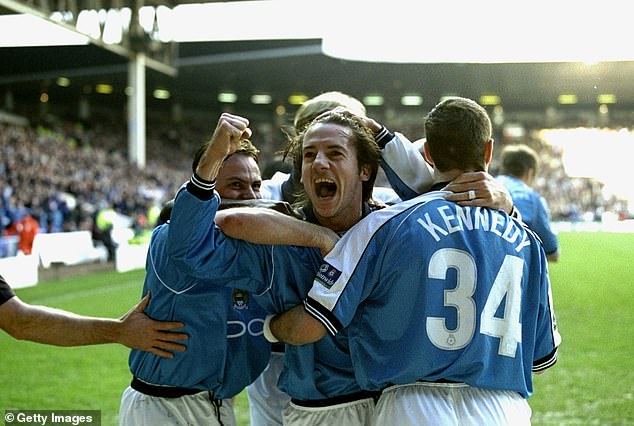 Bishop was an elegant, two-footed playmaker who enjoyed two stints at Manchester City

Bishop was — and is — a free spirit, and wonderful company with it. His trademark long hair and chic fedora, decorated by one of Charlie’s feathers, captures the man and the maverick.

We retire to the bar he has built just off the living room. It feels like an old London pub. He harbours a definite nostalgia for England, the country he left behind to move here on the back of a successful spell with Miami Fusion in MLS.

‘See this,’ he says, picking up a bronze football trophy. ‘Evening Standard, best player in London award. Better than Gazza. For one month…’

That’s still a nice achievement? ‘Yeah, but I was there nine years!’

As much fun as this is, Bishop doesn’t seem one for a quiet night in. ‘Fancy town?’ he asks. Absolutely. Let’s go. He floats the idea of bringing Charlie, who would no doubt be great conversation and a source of protection, but decides against it. Probably best.

We catch a lift into Delray Beach in a Mini convertible, top down, music up. The Housemartins hit Happy Hour is playing and Bishop’s Scouse melody mixes seamlessly with fellow Merseysider and singer Paul Heaton to bring song to the warm Atlantic air. ‘What a good place to be…’

They are right. Only, that is when we see the body bag. A fatality from a road accident is being lifted into an ambulance. Chillingly, Bishop had told me earlier of how dangerous the roads are in these parts. 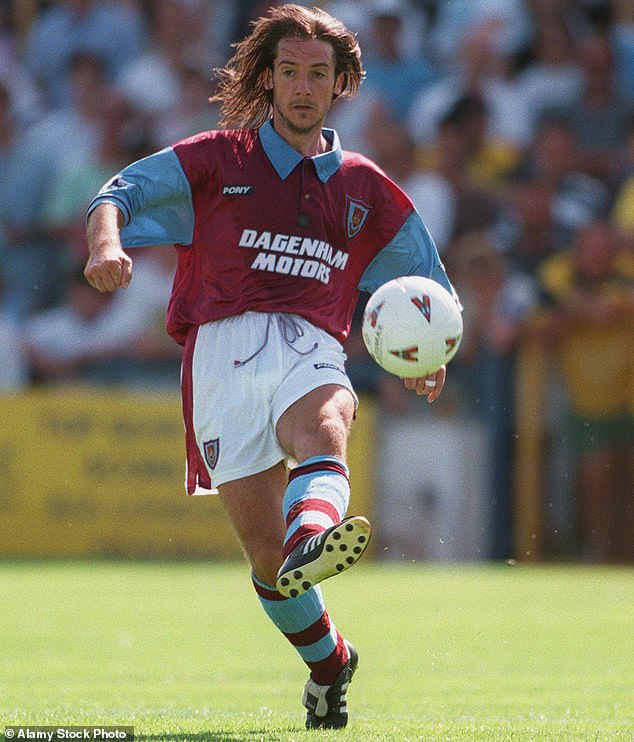 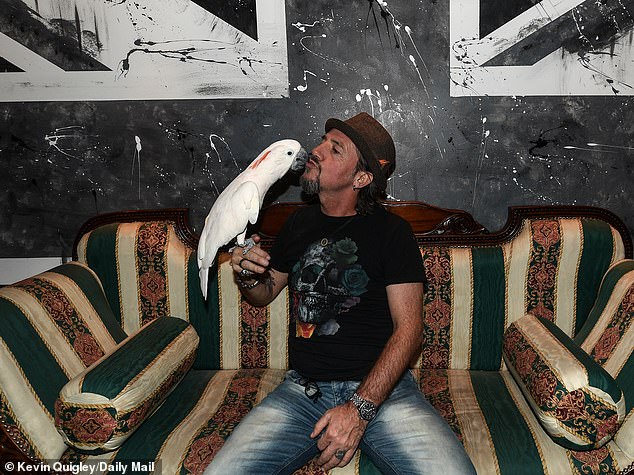 He puckers up for a kiss with his pet cockatoo, Charlie, during his interview with Sportsmail

That is why his Harley-Davidson has been parked for the past 18 months. We lower the music and drive on, arriving at The Avenue, a neon-illuminated strip of open-air bars. It is Friday and live bands play at every other venue.

‘Are you the lead singer?’ a lady asks Bishop during a break in performance. It is an entirely plausible enquiry and one we mischievously entertain. After all, she was unlikely to have embraced tales of the Boleyn Ground.

Another young reveller tells us that rapper Vanilla Ice — of 1990s fame — is playing next door. Really? It’s true, there he is, on the mic performing to a packed dancefloor.

‘I’ve met him,’ announces Bishop. ‘My mate was cleaning windows and I gave him a hand once, we did his place. Nice guy.’ Window cleaner. Artist. Footballer. Oh yes, and poker star too. Bishop’s story is definitely best told over a beer.

It was in 2006 that Bishop found himself at a poker table in the MGM Grand just 40 minutes into Party Poker’s World Series main event, facing a decision that would make or break his week in Las Vegas.

In his hand were two fours. The flop (cards for all players) were three, four, seven. He now had three fours, a decent enough hand. He stayed in. That was when a female opponent went ‘all in’. Fourteen years on, as we reflect from the drinks terrace of Burt & Max’s in Delray Marketplace, his bewilderment lingers.

‘I’m thinking, “Why’s she done that? She must have hit the nuts — five, six. Or is she bluffing?” I had a chance to win enough to go straight through to day two. So what do you do?’ 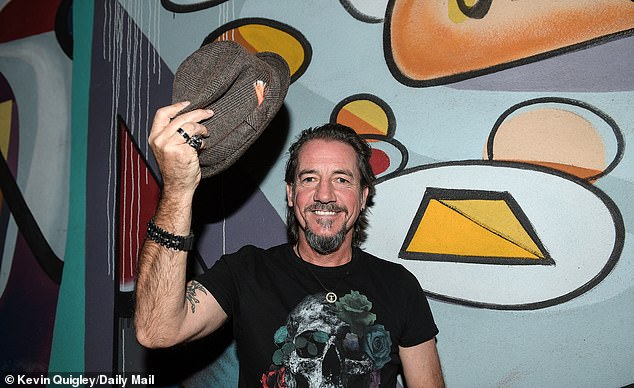 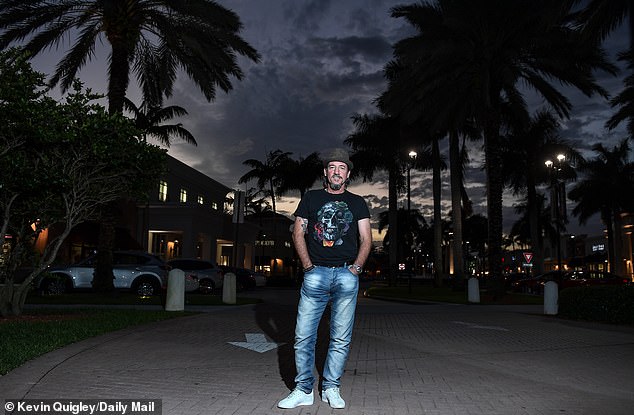 Bishop missed another four on the next two community cards and was done.

‘I’d won 10 consecutive tables of 10 players to get there. I’d waited three months and it was a five-hour flight. And I’m going home after 40 minutes — I didn’t even make it to half-time!’ 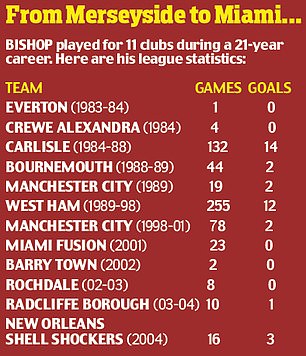 He returned to Florida that night. The next morning, however, he entered another tournament and won £30,000. ‘Maybe it was meant to be,’ he smiles.

The dad-of-three plays little poker these days and instead varies his time between the golf course, coaching football and media work. He would even be open to a return to the UK were an opportunity to present itself.

He admits, though, that he needed the thrill of the poker table in the wake of his 21-year playing career.

‘It was the only thing that gave me a similar buzz to running out in front of 40,000. It wasn’t desperation, like it is for some. Don’t get me wrong, losing was like losing a footy match.

‘But you have to learn it can all go against you in a second. I learned to handle that — the same with having a beer, partying, gambling on the horses. I know when to stop. I’ve never let anything get a hold of me.’

He certainly did not let Carlos Valderrama get a hold of him during one infamous scrap with the Colombia star, who was playing for Tampa Bay Mutiny in MLS. 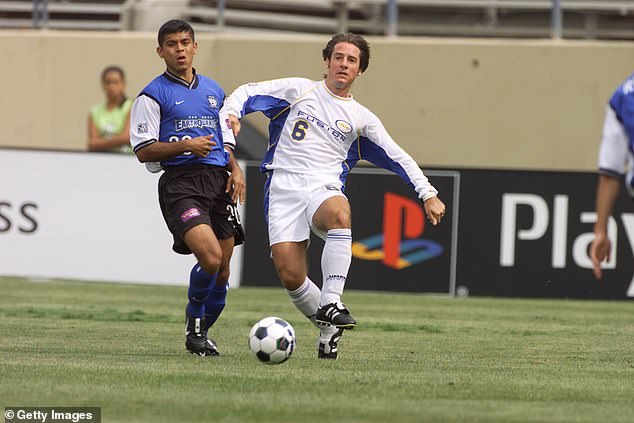 ‘First of all, great hairdo, great player. But we (Miami) were 4-0 up at Tampa late on and I’d ran the show. The ball came out of the sky and I trapped it with my a**e. I sat on it. It was instinct.

‘I saw him running towards me, but before he got there I just dropped off a little side pass. Except, he kept on coming. He’s screaming at me in Spanish. I was laughing, “Don’t know what you’re saying, mate”. I know I’m wrong, but it’s funny. We were in each other’s faces, well as close as you can get with his wig.

In fact, he loved life. ‘We had two sponsors at Miami — Budweiser and Hooters. We ran out to Hooters girls and came back in to a crate of Budweiser! I thought I’d died and gone to heaven.’

This was all a far cry from Carlisle United, where Bishop established himself in the mid-1980s before a move to Harry Redknapp’s Bournemouth and a brief first spell at Manchester City in 1989. 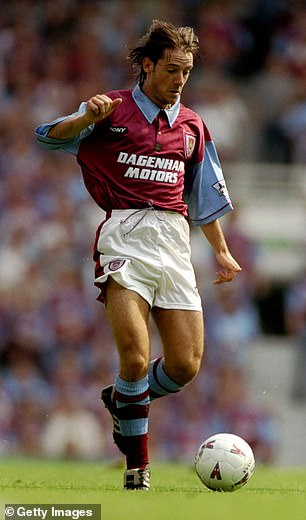 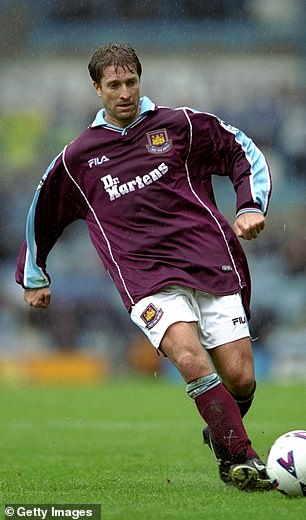 And then West Ham. ‘Those nine years were amazing. I’d found home. Their style of football, Upton Park, the fans, playing alongside John Moncur. What a player.

‘We’d go for a pint and tell each other we were the best we’d ever played with. Everyone else said we couldn’t play together, too similar. They’d say you need a ball-winner. We’d be like, “Why do you need to win it if you don’t give it away in the first place?”’

At West Ham, though, there was also a period in Bishop’s life that is not so easy to explore. ‘You’re going to ask about the rumours, aren’t you?’ he says. I can’t not, I explain.

It was in 1991 that best friend and team-mate Trevor Morley was stabbed by his wife. He nearly died. Malicious gossip spread of the motive being that Morley and Bishop were in a relationship. It was untrue. That did not stop the crude terrace taunts. 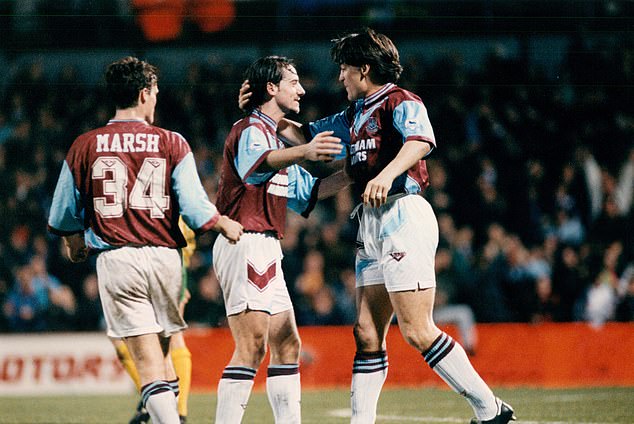 ‘I got abused for 10 years because of that, and I had a wife and three kids. I got through it. The worst thing for me was that it really affected Trevor. This was my friend, on his death bed, and all of a sudden these ridiculous lies start appearing and you lose control.’

Bishop had won an England B cap and was tipped for senior honours.

‘I do believe all of that affected my England chances. I believe I was good enough, I’ll be honest.’

There is, then, regret. Anger, even. But, as ever with Bishop, also humour.

‘Trev came to stay with me and my wife during his convalescence. As a joke, when my wife went down to make the tea in the morning, he’d jump into bed with me and we’d read the papers.

‘We’re sat there one morning and the window cleaner appears! He saw the funny side, I hope.’ 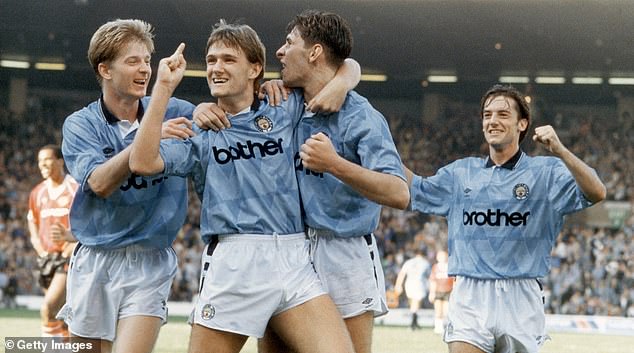 Bishop (right) scored in the ‘Maine Road Massacre’, the 5-1 win over Manchester United in 1989 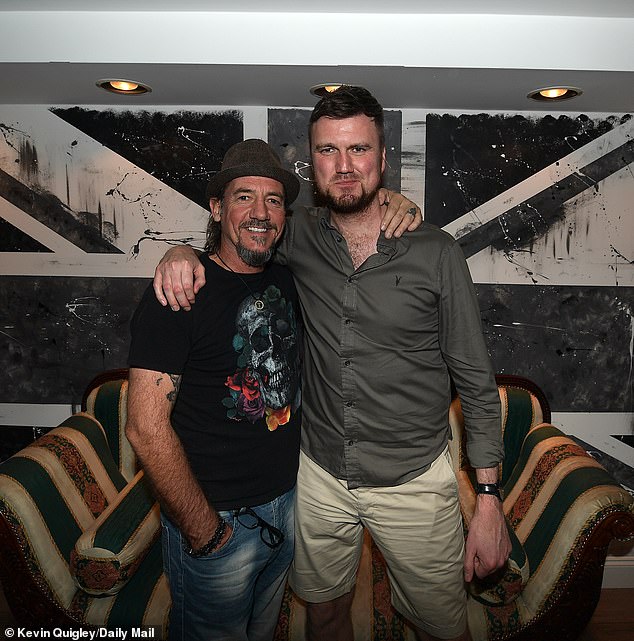 Bishop left West Ham a club legend in 1998 but gave up a testimonial to drop two divisions and play his part in the rebirth of Manchester City, for whom he was instrumental in back-to-back promotions to the Premier League.

‘I was already a cult hero at City because I’d scored in the “Maine Road Massacre”, the 5-1 win over United in 1989. But I had unfinished business. To go back and play my part in that period, it was special.’

Miami followed City and then, aged 39, a final fling at New Orleans Shell Shockers. ‘What a place, but I had to get out of New Orleans. Imagine the best Christmas parties ever, and we had that every day for four months. They even had daiquiri drive-throughs!

Still, there will always be something of the entertainer about Bishop. Spend a night in his company in Florida and you’ll appreciate why.