James Murray has been seen in character as Prince Andrew for the first time.

The Cutting It star, 46, has replaced Tom Byrne as the Queen’s second son for series five of The Crown, which will cover the events of the Royal Family in the Nineties.

James donned a grey suit and brown wig to transform into the royal alongside co-star Claudia Harrison, who plays Princess Anne, as they filmed in Surrey on Wednesday.

The pair were believed to be filming memorial scenes, suggesting the show will steer away from the official royal timeline with embellished scenes as in previous episodes.

Claudia took over the role from Erin Doherty, who played the Queen’s only daughter in the previous two seasons of The Crown.

She was dressed in a blue skirt suit for the scenes, with a brunette wig coiffed in Anne’s signature beehive style. 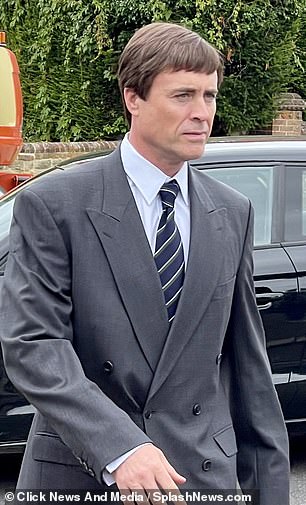 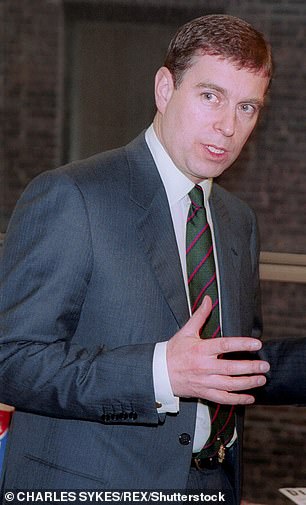 Two of a kind: Cutting It star James, 46, has replaced Tom Byrne as the Queen’s second son (pictured right: Prince Andrew in 2000) 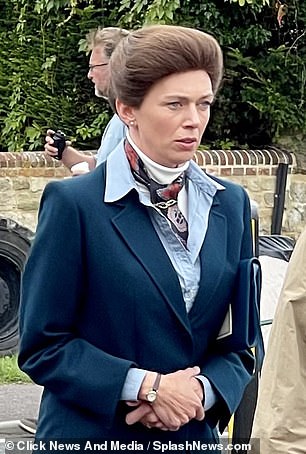 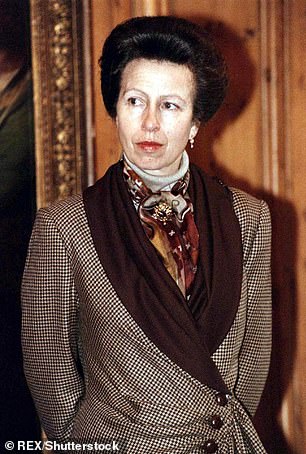 Seeing double: Claudia took over the role from Erin Doherty, who played the Queen’s only daughter in the previous two seasons of The Crown (pictured right, Princess Anne in 1999)

James’ previous endeavours include his portrayal of Stephen Hart in ITV’s Primeval, playing Liam Carney in BBC One’s season four of Cutting It and acting as the lead DCI in completely improvised show Suspects.

The Mancunian actor, who is married to actress Sarah Parish, is also currently filming Masters of Air – the Steven Spielberg and Tom Hanks-produced Apple TV series. 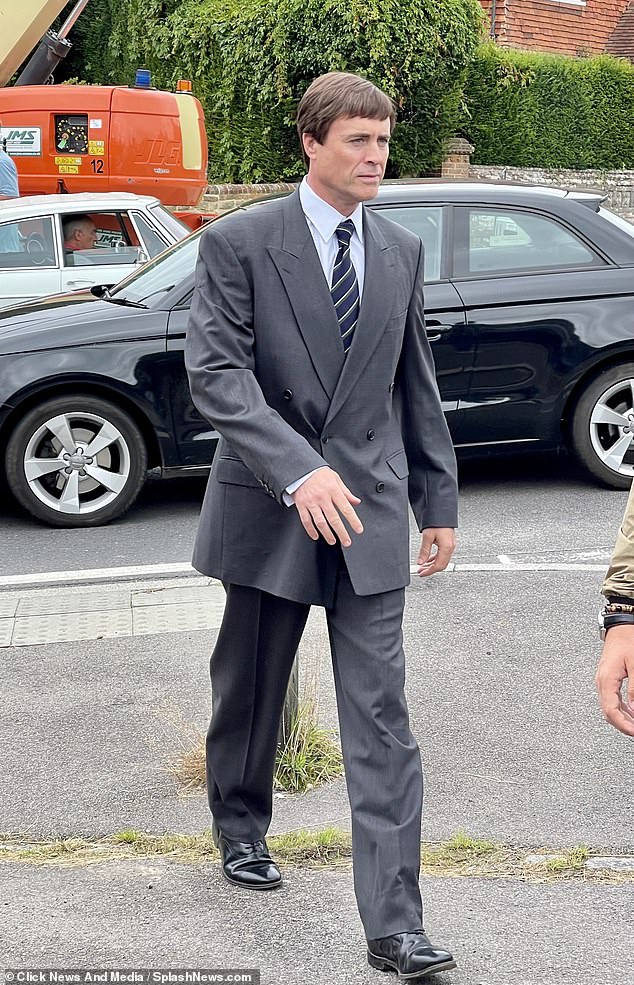 Dapper: James donned a grey suit and brown wig to transform into the royal alongside co-star Claudia Harrison, who plays Princess Anne, as they filmed in Surrey on Wednesday 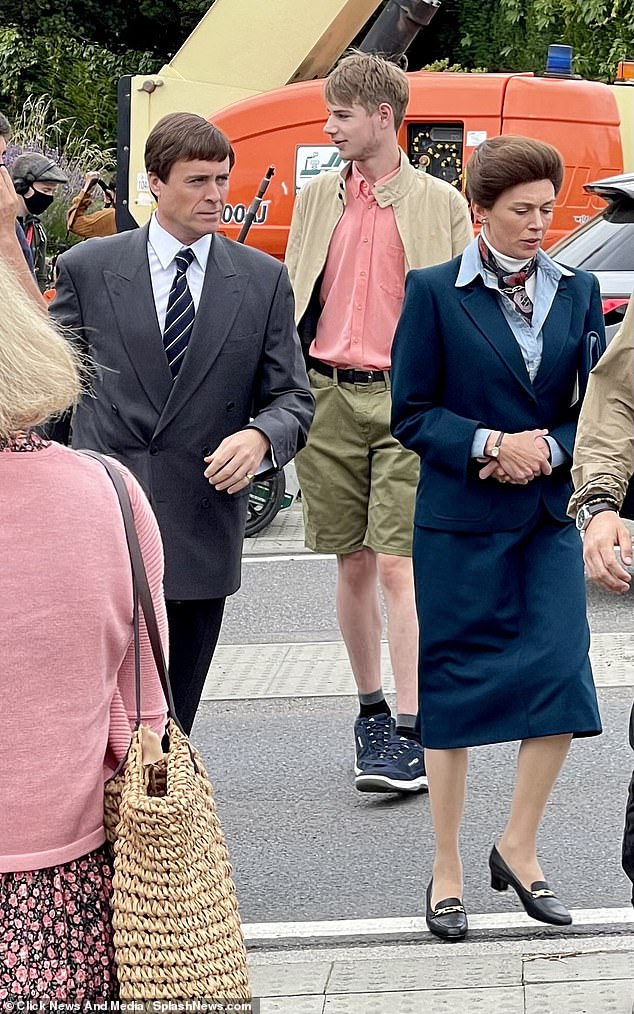 Blue-tiful: Claudia was dressed in a blue skirt suit for the scenes, with a brunette wig coiffed in Anne’s signature beehive style 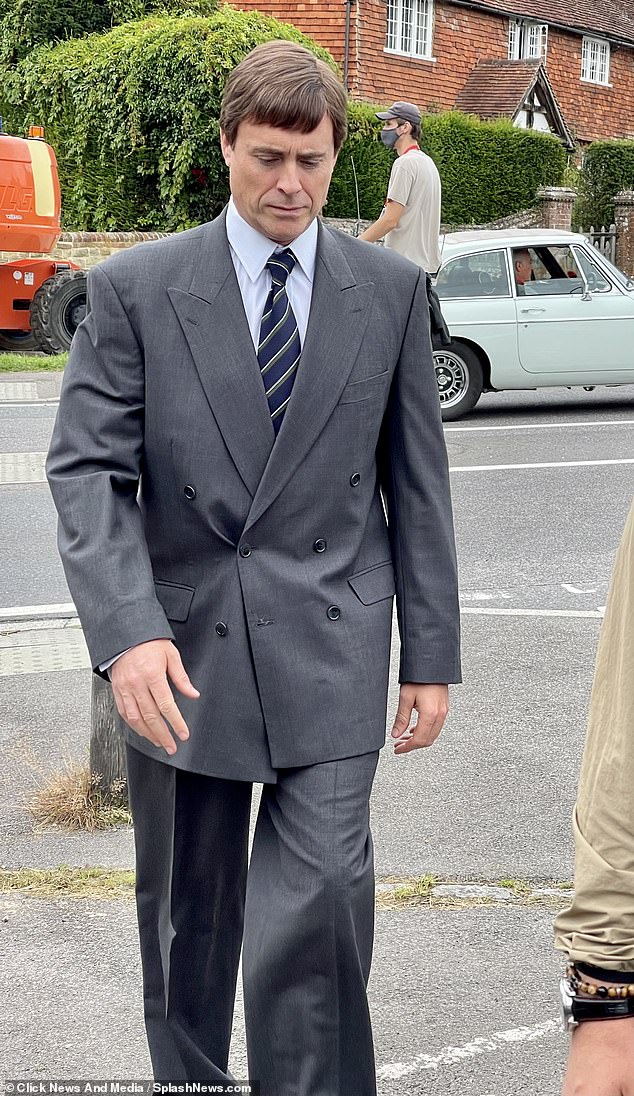 One to watch: The pair were believed to be filming memorial scenes, suggesting the show will steer away from the official royal timeline with embellished scenes as in previous episodes 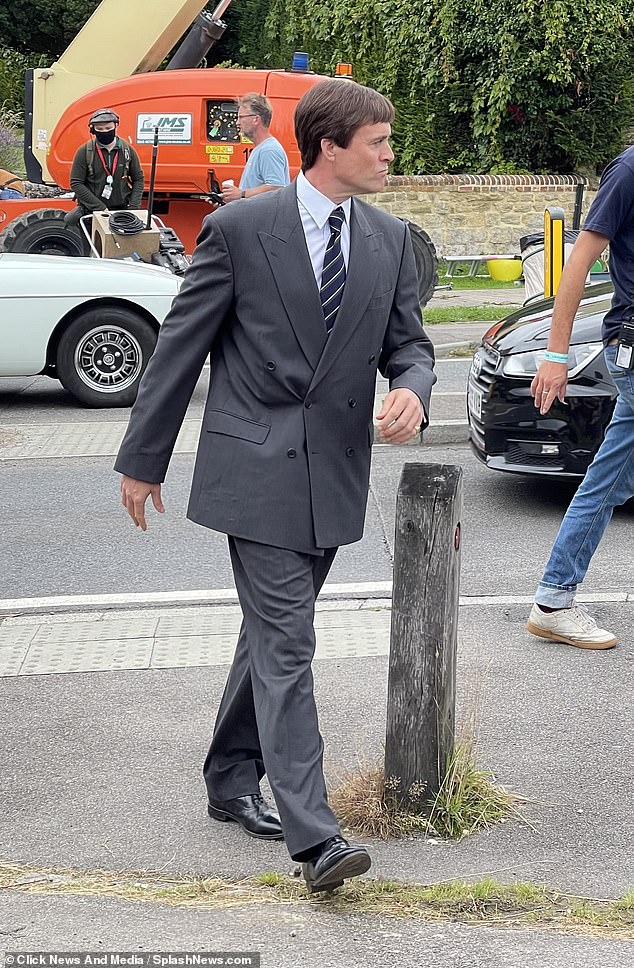 New face: News of James’ casting as Prince Andrew was unveiled last month. He is best known for his roles in Primeval, Cutting It and Suspects

The Crown’s fifth series will see Imelda Staunton take over the role of the Queen from Olivia Colman, while Lesley Manville is set to play her sister Princess Margaret, replacing Helena Bonham Carter.

Jonathan Pryce, 73, will take over the role of Prince Philip for the seasons showing the Royals navigating the 1990s and early 2000s.

Elizabeth Debicki will take over the coveted role of Princess Diana from Emma Corrin, while Dominic West will play Prince Charles. 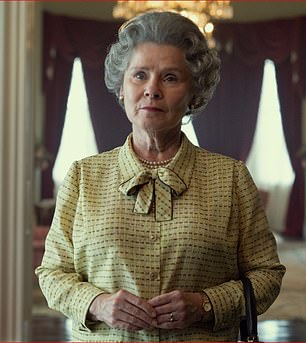 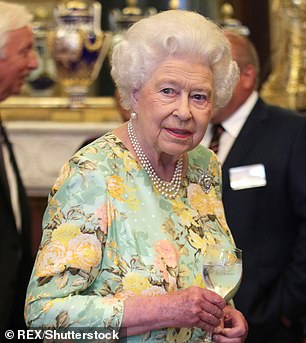 Her Royal Highness: The very first image of Imelda Staunton in character as Queen Elizabeth II was revealed earlier this month 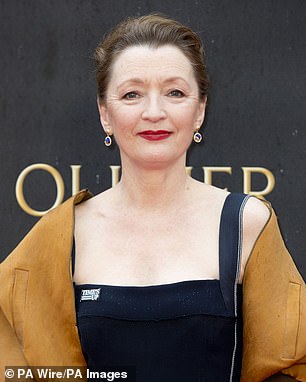 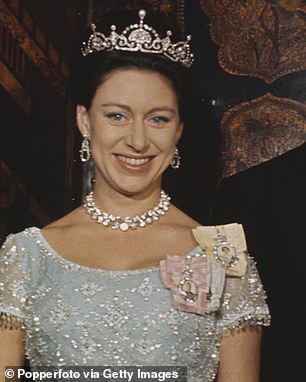 Congrats! Lesley Manville has been cast as Princess Margaret (right in 1966) for the fifth and sixth seasons of The Crown 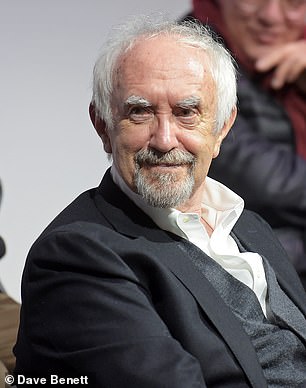 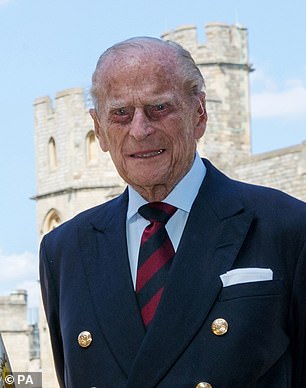 New role: The Two Popes actor Jonathan Pryce, 73, has said he is ‘confident’ to take on the ‘daunting’ role of Prince Philip in The Crown’s final two seasons 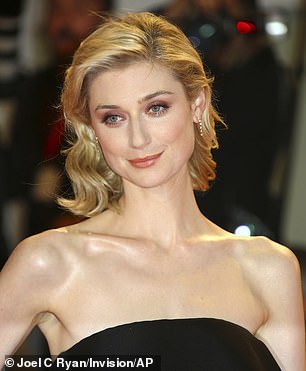 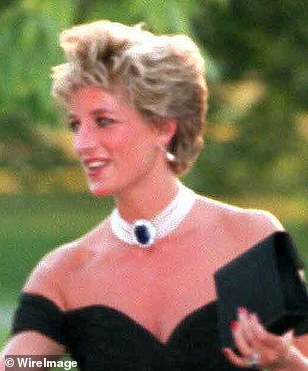 Casting: It was announced that Elizabeth Debicki had been cast as Princess Diana last August, and fans of the Netflix show were delighted to hear that the Australian actress would be taking on the role 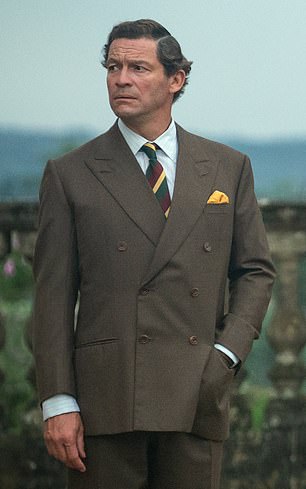 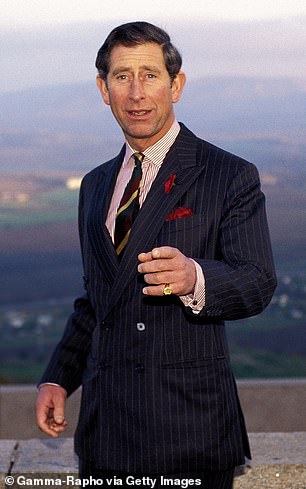 Leading man: Dominic West will take on the role of Prince Charles (right in 1996), at a time when his marriage to Diana came to a turbulent end. A first look at the actor in character was released earlier this month (left)

The final two series of The Crown will cover the Royal Family’s history throughout the 1990s and into 2003, however it is not yet known which moments will be seen.

There are several poignant moments which could be used, including the Queen making a speech on her 40th anniversary of her accession in 1992, in which she called the year an ‘annus horriblis’.

Key historical moments involving the Royal Family between 1999 and 2003

1999: The marriage of the Queen’s son Prince Edward and Sophie Wessex: The wedding took place at St George’s Chapel in Windsor.

2000: The Queen celebrates the Millennium: Millennium celebrations take place throughout the UK. The Millennium Dome in London is officially opened by HM The Queen on January 1.

2001: Queen Elizabeth reacts to 9/11 terrorist attacks: A week after the tragedy she sent a message to the British ambassador to Washington, Sir Christopher Meyer to offer her condolences.

She wrote: ‘Each and every one of us has been shocked and numbed by what we have witnessed in these recent days.

‘At your service today, we think especially of the British victims. These are dark and harrowing times for families and friends of those who are missing or who suffered in the attack – many of you here today.

‘My thoughts and my prayers are with you all now and in the difficult days ahead’.

On September 13 The Queen ordered the Changing of the Guard ceremony to be paused for a two minute silence, followed by the playing of the American national anthem.

2002: The Queen’s Golden Jubilee: The Queen celebrated the milestone on February 6 and it was an international event to mark the 50th anniversary of her ascension to the throne.

On June 4, an estimated one million people headed to central London to line The Mall on the last day of the official celebrations.

Queen guitarist Brian May played ‘God Save The Queen’ from the roof of Buckingham Palace in her honour.

2002: The Queen dines at 10 Downing Street with the five living former Prime Ministers who served under her. She met with Tony Blair, John Major, Margaret Thatcher, James Callaghan and Edward Heath.

2002: The death of Princess Margaret: The Queen’s younger sister dies after suffering a stroke aged 71. The pair had had a troubled relationship after The Queen said she couldn’t marry her love Peter Townsend.

2002: The Queen Mother dies: She passed away aged 101 at Royal Lodge Windsor.