The ‘crying’ moon: Small meteors are hitting the surface

The ‘crying’ moon: Small meteors are hitting the surface and causing water 3 inches deep in the lunar soil to spew out, say scientists

Small meteors which crash into the moon are cause it to leak water buried just three inches (8cm)  below the lunar surface, according to NASA scientists.

They suggest that the subsurface moisture that is being released has been retained since the Moon formed, or soon after.

The researchers estimate that meteorite impacts on the Moon cause the loss of as much as 200 tonnes (220 tons) of water per year.

The impacts hit soil which is dry 3 inches (8cm) deep underneath which is a layer with about 0.05 per cent water content which is spewed out on impact.

The researchers estimate that meteorite impacts on the Moon cause the loss of as much as 200 tonnes of water per year. The impacts hit soil which is dry 3 inches (8cm) deep underneath which is a layer with about 0.05% water content which is spewed out on impact

Following the early analysis of lunar samples from the Apollo and Luna missions, the surface was generally accepted to be anhydrous, or contained no water

But a decade ago, trace amounts were found on the surface of the Moon, and not only in polar ice deposits as previously thought.

Researchers say the water originated on the moon due to a combination of solar wind and meteor tires bringing it to the barren surface.

However, the source and extent of these water traces have been debated.

When a speck of space debris strikes the moon it vaporises on impact, creating a shock wave that resonates through the lunar soil.

For a sufficiently large impactor, this shock wave can breach the soil’s dry upper layer and release water molecules from a hydrated layer below.

Using an instrument on aboard NASA’s Lunar Atmosphere and Dust Environment Explorer (LADEE), planetary scientist Doctor Mehdi Benna said that it picked up ‘high anomalously high and episodic amounts of water in the lunar atmosphere’.

‘There was so much that the instrument on the spacecraft acted like a sponge, soaking up the water that was moving through the atmosphere,’ said Dr Benna.

The LADEE detects these water molecules as they enter the lunar atmosphere, with peaks in the water signal correlating to known meteor showers on Earth.

The craft orbited the Moon from October 2013 to April 2014 and its detections coincided with 29 meteor streams. 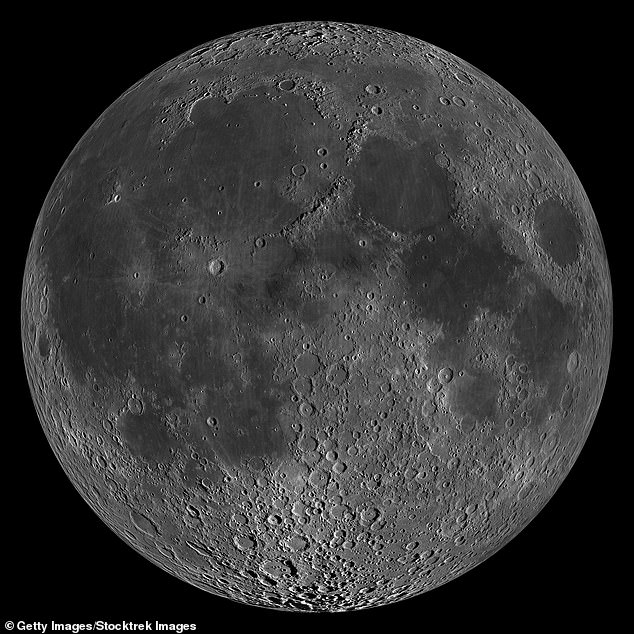 These findings may lay the groundwork for future investigation into the origin and fate of water on the Moon. The researchers estimate that meteorite impacts on the Moon cause the loss of as much as 200 tonnes of water per year (stock)

Dr Benna and his team studied the amount of water released by meteor streams of different sizes.

They were then able to determine that the uppermost layer of lunar soil is dehydrated.

Below this, they calculate that water is uniformly present at concentrations up to about 0.05 per cent.

The team said that the discovery may lay the groundwork for future investigation into the origin and fate of water on the Moon and improve our understanding of the moon’s geologic past and its continued evolution.

The full findings were published in Nature Geoscience.

WHAT OTHER EVIDENCE HAS BEEN FOUND FOR WATER ON THE MOON?

A number of researchers have made claims that water may be found on the moon, either above or below its surface or in its soil, by future visitors.

Such discovery could mean future lunar colonies could harvest water on the moon without having to bring it with them from Earth.

They could also convert it into hydrogen and oxygen for rocket fuel or oxygen to breathe, scientists claim.

In February 2018, a study found by the Space Science Institute in Boulder, Colorado water in the form of OH – a more reactive relative of H2O – all over the lunar surface.

In September 2017, experts created the first map of water and its building blocks trapped in the uppermost portion of the Moon’s soil.

They claimed that water in this form is present nearly everywhere on the lunar surface.

A separate study that month, showed that the surface of the moon holds more water than we thought.

It suggests the interior of our natural satellite could hold a deep reservoir of water.

This finding bolsters the idea that the lunar mantle is surprisingly water-rich, which could make colonising it for future space exploration much easier.