The darts-playing postman with an IQ of 159

Britain is full of unsung heroes and heroines who deserve recognition. Here in our weekly obituary column, the moving and inspirational stories of ordinary people who have lived extraordinary lives, and who died recently, are told by their loved ones…

Peter the postman with an IQ of 159

Peterter grew up in a two-up, two-down cottage in Duston, Northamptonshire, with his mother Vera, who was a caterer, and his grandmother Florence, a local darts champion.

He never met his father, Henry, a soldier who had been stationed at the barracks nearby.

When told the happy news that Vera was pregnant, Henry fled back to his own wife and family on the South Coast.

For all that, Peter’s childhood was happy. He adored reading, loved nature and the outdoors — and had a pet squirrel who used to run up and down his arm.

Gifted and modest: Peter and Carol’s wedding day in 1964 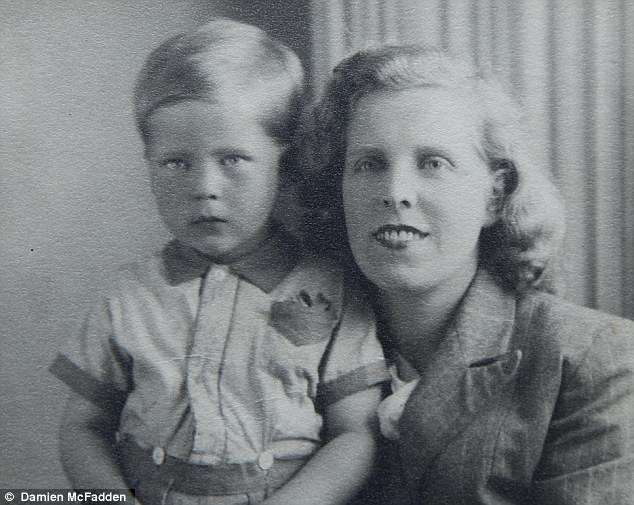 Peter in 1944 with his mother Vera 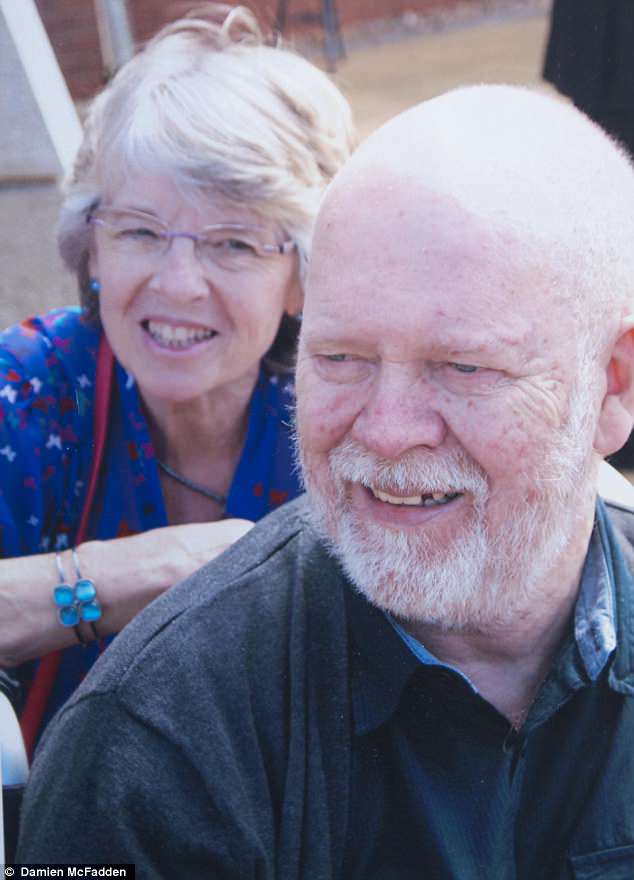 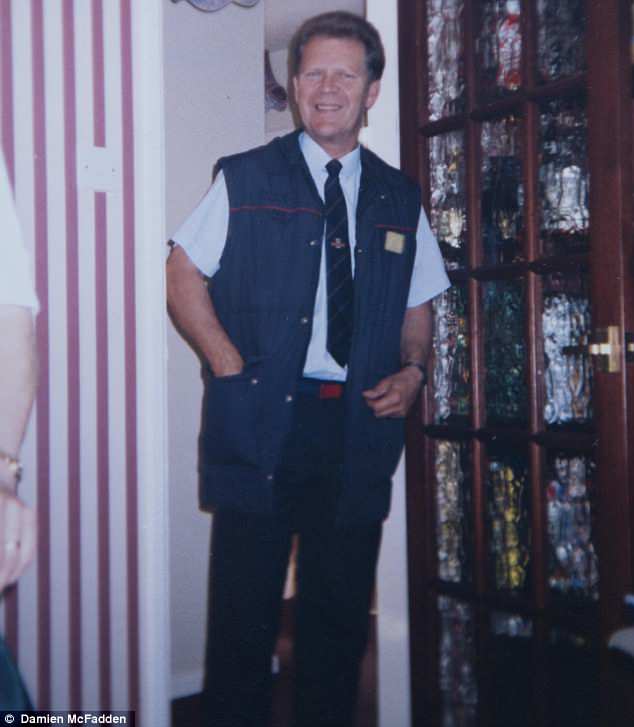 Peter Kirk from Northampton read constantly, adored cricket, was a brilliant musician and photographer, and collected everything from stamps to concert programmes

Academically gifted, he flew through the 11-plus, but later lost two years to rheumatic fever and left school early, flitting from job to job — painter and decorator, aerial-rigger and warehouseman.

Vera, meanwhile, married a man from Belfast who knocked her about. A second wedding to an American GI was called off when it emerged that he was already married.

Eventually, she settled down happily with second husband, Julyan John Hakes, and, finally, Peter had a sister, Julie. Despite a 12-year age gap, they were close.

Pete and I met on a coach trip to Farnborough Air Show in September 1962. He fell for me very quickly.

It took me just a little longer, but eventually I realised that, though a man of very few words, what he said was worth hearing. We wed in 1964 and were very happy.

We had three children, David, John and Lorna, and three grandchildren. He was a lovely father — quiet and loving.

He read constantly, adored cricket, was a brilliant musician and photographer, and collected everything from stamps to concert programmes.

We never moved from Duston, but he adored travelling around Britain.

Later in life, he took exams for fun: O-levels in English and Maths, a traffic controller qualification and, in 1992, he took the Mensa test and scored 159.

His certificate says that he was in the top one per cent of the population!

Pete was never career-minded, but had always longed to be a postman. When he took the test in 1986, they said he was too clever.

But he insisted and loved it. He even won Postman of the Year and was on Anglia TV.

It was after our daughter Lorna’s wedding in 1997 that our health started to fail.

I was diagnosed with multiple sclerosis and, soon after, Pete with an inoperable brain tumour. The doctors told him to enjoy life as best he could.

He lived for another 20 years! Slowly, he went from walking stick to a walking frame to a wheelchair and, for the last three years, he was virtually housebound.

But he never, ever lost his spirit. He joked all the time and his carers loved him.

Pete could have done so much more with his life, but it wasn’t wasted. He was happy with his lot and was a lovely, lovely man.

Her best friends were Time Lords and Jedis

Sarah and I were always different. I was into dolls and My Little Pony, and she was a tomboy who loved Transformers, taking things to pieces and rebuilding them.

She could make or mend anything and she loved technology.

If repairmen ever came to the house when we were small, she’d follow them around (armed with a screwdriver).

Sarah Little was a brilliant aunt who doted on my son Joe, now 15

As a teenager, she discovered science fiction. She loved The X Files, Quantum Leap and Star Trek: The Next Generation.

She had lots of jobs over the years — in a cinema, a bowling alley, in tool shops and at Homebase.

But she had so many interests. She loved the Ancient World and travelled solo to Greece and Egypt, visiting the tomb of Tutankhamun. She loved Stonehenge, too.

In her 30s, she began attending sci-fi conventions where she met stars from her favourite shows.

She soon discovered Cosplay, in which fans attend conventions dressed as a particular character.

Her favourite was David Tennant’s 10th Doctor (she adored the actor and met him several times).

But she made lots of other costumes — Marvel’s Black Widow, Men In Black and Star Trek.

She was a brilliant aunt who doted on my son Joe, now 15.

Sarah first fell ill about two years ago, and was diagnosed with type 2 diabetes. Then started getting migraines. It was only when she had a seizure that doctors reluctantly offered her a brain scan.

She never had it. Our mum found her in her flat, dead of an undiagnosed brain tumour at 38.

Sarah would have loved her funeral! Her Doctor Who-themed coffin was carried in to the show’s theme music.

Many of her Cosplay friends attended, including several Time Lords and a Jedi Knight.

The ceremony was also live-streamed on the internet to her friends around the world. We miss her so much.

Husband who taught me how to live

David and I hadn’t known each other long. We met on a walking holiday on the Isle of Arran seven years ago and were married for just five years.

He said he noticed me first, but he soon got my attention. I was 44 and he was 62, but he didn’t look it: in fact, I made him show me his driving licence to prove his age!

At the end of the holiday, he asked for my email address — even though he didn’t have a computer. He did have a telephone, thankfully.

He lived in Paisley in Scotland and I was living on the South Coast in Lancing, West Sussex, but the next weekend I travelled back up to try to get to know him better. 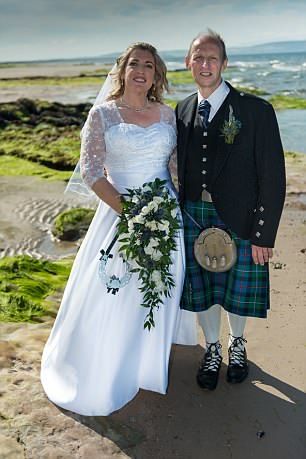 David Frances Faulds’ wedding photograph: He exuded calm and never got upset or frustrated in a traffic jam, or even when his favourite football team lost

Within a month, I’d taken the plunge and moved my life to be with him.

I’d realised pretty quickly that David was special. He wasn’t a religious man, but he was a good man, and he saw the good in every person he met.

He didn’t try to fix people or change them, he just accepted them as they were. And he listened.

He would help anyone — he’d give lifts home, roll up his sleeves and paddle in if someone’s kitchen had sprung a leak, and he’d bake for anyone and everyone.

Glasgow-born, David took over his father’s newsagents in Paisley, which he later sold to go and work for John Menzies, delivering newspapers to shops throughout the night. While he missed the bustle of his shop, he soon adapted and became part of the team.

Neither of us had been married previously. David had lived with his parents until they died.

He’d also never really been in a very serious relationship before, so his marriage proposal took a few hints and a few stiff drinks. But it worked.

We moved to the Scottish Highlands when he retired and I carried on working as a freelance financial journalist.

We got married in Nairn on August 11, 2012. I wore white and he wore his kilt in the Campbell tartan.

We were very happy — though I hadn’t realised what a comedian he was. How he deliberately made mistakes, got colours wrong, put things in cupboards upside down, back to front, just for the fun of it.

David didn’t think life should be too perfect. He liked for things to go slightly wrong.

Despite being on tablets for hereditary heart disease, he was fit and able and never really ill. The day before he died, he was walking our dog, Campbell, and met his best friend for a drink.

He even drove himself to hospital because it was supposed to be simple day surgery to fit stents in his arteries that would protect him from a sudden heart attack.

But it turned out there were complications — though they did everything they could.

It’s only afterwards that I realised the extraordinary gift David gave me.

He exuded calm and never got upset or frustrated in a traffic jam, or even when his favourite football team lost.

He took the time to daydream. He never complained. He accepted things as they were and always showed empathy, even to complete strangers.

He showed me how to live well. And then there was that sense of humour!

He was such a lovely husband. It felt like we’d only just met. I never expected him to go so suddenly.

The Pearly Queen who made me feel like a king

KATHY was the most wonderful wife — beautiful, caring and kind. She knew me inside out. If I was in pain, she’d care for me. If I lost something, she’d find it.

She was my alarm clock, my right arm, my cook and my ears. I am very deaf and she even went to evening classes to learn sign language, just in case I lost my remaining hearing.

Most of all, she was the Pearly Queen of Peckham to my Pearly King, embracing my love of the Pearly tradition of dressing up in mother-of-pearl decorated suits to raise money for charity.

Really, she hated being the centre of attention — but took part just to please me.

Our love story began 41 years ago when I knocked on the wrong door in South Norwood in Croydon. I was supposed to be picking up my blind date for the evening, but instead met Kathy. 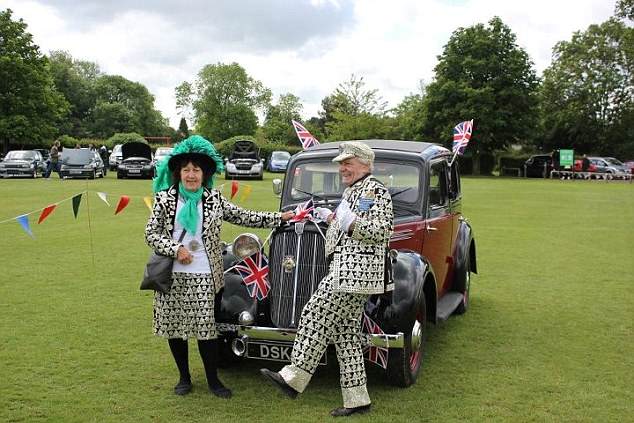 George and Kathy Major: ‘She was my alarm clock, my right arm, my cook and my ears’

We got chatting, and she realised I was deaf by the way I was looking at her lips. She was beautiful, with lovely brown hair, and even before we went out for dinner I could feel something romantic starting.

A year later I proposed, on one knee. I was hoping so desperately she’d say yes that the engagement ring was burning a hole in my pocket.

She was acquiring more than a husband. My first wife, Anne, had died several years earlier and I had four children. Kathy and I wed in September 1978 and honeymooned at Lake Windermere, driving there in my Robin Reliant three-wheeler, just like Del Boy Trotter from Only Fools And Horses. (I even ran a market stall in Peckham.)

I was the happiest man in the world. My children adored Kathy and soon she had two more children to look after — Claire Louise and Sean.

She was marvellous, juggling it all, as well as working, first at Lloyds Bank and, until she died, as a sales assistant in the Epsom branch of M&S.

Eventually, we had 12 grandchildren and seven great-grandchildren. They all loved her and always sought her advice.

She was never once ill. Then, one Monday in February, while we were watching TV, she went into the kitchen, complaining of a headache.

I found her collapsed on the floor. Kathy had had a stroke and died the next day.

Everyone loved her. I’ve received more than 600 letters of condolence. Kathy was a marvellous woman. She was my best friend, my everything.