When magazine mogul Jann Wenner saw Mick Jagger and his star photographer Annie Leibovitz wandering up from a Barbados beach at midnight, he couldn’t help notice the Rolling Stone’s knees were covered in sand.

It could only mean one thing and Bianca Jagger evidently reached the same conclusion, according to a new book. She furiously emptied a pot of icy water over her husband’s head.

Mrs Jagger shouldn’t have been surprised. Wenner and Leibovitz were guiding lights of Rolling Stone magazine, the rock music ‘bible’ that for much of its 50 years has been more ‘sex, drugs and rock ’n’ roll’ than the music superstars it covered, according to Sticky Fingers, a withering biography of Wenner and the magazine.

Staffed by a motley crew of bed-hopping, pot-smoking reprobates under the command of cocaine-snorting Wenner, when Rolling Stone wasn’t getting high with the rock gods of the Sixties and Seventies, it was feuding bitterly with them.

Numerous stars, including John Lennon and Paul McCartney, all fell in and out with the powerful but touchy Wenner. Some, may even have fallen into bed with him, the book claims.

But then, Wenner was always a mercurial soul. In 1995 he left his wife and mother of his three children after 27 years for a twentysomething male fashion designer after coming out as gay.

It’s possible that even Wenner has forgotten through the drug-addled haze how badly he and his friends all behaved, given his outrage over a biography which he actually commissioned.

He not only spoke to its author, the respected American writer and investigative journalist Joe Hagan, but persuaded many of his pals to do the same.

Apparently expecting a hagiography, Janner, now 71, was appalled and furious with the result, accusing the author of focusing too much on his sexuality and drug use. This week he disowned Hagan, dismissing the unflattering book as ‘deeply flawed and tawdry’.

Wenner, a university drop-out, was 21 when he founded Rolling Stone in San Francisco in 1967.

Perfectly capturing the counter-culture mood of the 1960s and — a decade later — rock music’s emergence as a huge industry, Rolling Stone rapidly became the place where any self-respecting musician had to be seen.

For British stars, the thumbs-up from Rolling Stone was crucial to U.S. success. When the magazine monstered Eric Clapton, calling him the ‘master of blues cliches’, he was shown the article while dining in a restaurant — and promptly fainted.

It helped that Wenner spent huge sums attracting fashionable American writers such as Hunter S. Thompson, Truman Capote and Tom Wolfe. It helped more that he, allegedly, cosied up outrageously to some stars, allowing the likes of Bob Dylan, Bono and Jagger to edit their own interviews.

Critics dismissed Wenner and his equally ambitious and status-obsessed wife Jane as glorified rock groupies. But as Rolling Stone’s sales soared above a million, their wealth and power grew exponentially. Their flash lifestyle included homes in San Francisco, Manhattan and the affluent beach community of the Hamptons on the East Coast, a ski ranch in Idaho and their own Gulfstream II jet. 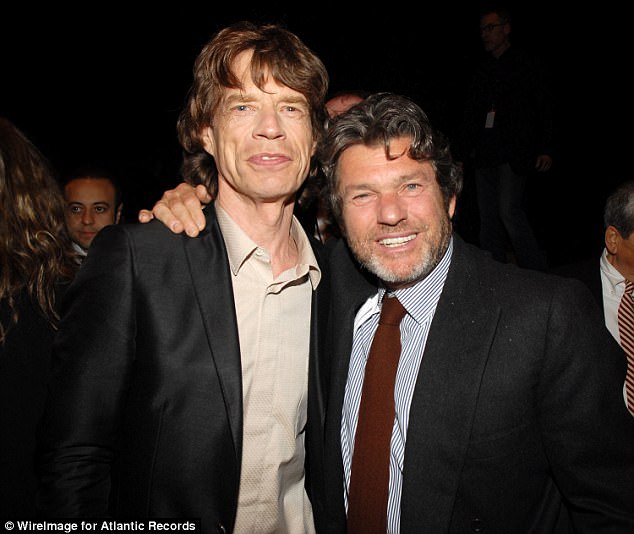 At just 5ft 6in, Wenner certainly lives up to the Napoleon Complex of the driven, arrogant and insecure small man. A shameless social climber, he claimed he founded Rolling Stone just so he could meet John Lennon — the music ‘genius’ he idolised above all others.

His fixation with Jagger, however, was seemingly more carnal.

The Rolling Stones were none too happy that Wenner appeared to be cashing in on their fame with his choice of magazine title. But after meeting Wenner, Jagger ended up agreeing to collaborate on a UK version of the magazine in 1969.

It was the start of a bizarre friendship. In London, Wenner and The Who’s Pete Townshend — who has described himself as having been ‘probably bisexual’ — went to watch the Stones in a recording studio. They were ‘ogling Jagger like groupies’, Hagan writes. ‘It turned out that [Wenner], like me, harboured an adoration of Mick Jagger that was not entirely heterosexual,’ Townshend told him.

It is alleged that Wenner later went back with Jagger to his Chelsea flat, but the evening was cut short by the singer’s then girlfriend, Marianne Faithfull, coming home ‘hysterical and histrionic’ after a day on the set of Hamlet, in which she was playing Ophelia.

The UK Rolling Stone deal rapidly soured. Wenner was furious that its stoned staff couldn’t even spell stars’ names correctly, with a Bob ‘Dillon’ headline on the front page.

But rather than rein them in, Jagger indulged them.

The book claims that the UK staff threw a record industry party in which the punch bowl was spiked with LSD and several guests had to be hospitalised. Victims included Marc Bolan of T Rex, who became so paranoid that he locked himself in a lavatory until he was talked out by a gynaecologist, also a guest.

Wenner closed the UK title after less than a year and his love-hate relationship with Jagger soon took another turn for the worse.

The Stones organised the disastrous Altamont free music festival in California in December 1969 where thuggish Hells Angels provided the band’s security. They beat up fans with pool cues and there was a fatal stabbing.

Rolling Stone magazine tore into Jagger, saying the festival had been the ‘product of diabolical egotism, high ineptitude … and a fundamental lack of concern for humanity’. Harsh words, but they made up within months when — to the disgust of his journalists — Wenner put Jagger on the front cover.

Marshall Chess, the Stones’ former publicist, told author Hagan that Wenner acted like a besotted groupie, regularly having Jagger over to his home for cocaine sessions. Chess, like others, speculates about what went on. Asked by Hagan whether they did anything untoward, Wenner laughed and said: ‘I neither confirm nor deny.’ 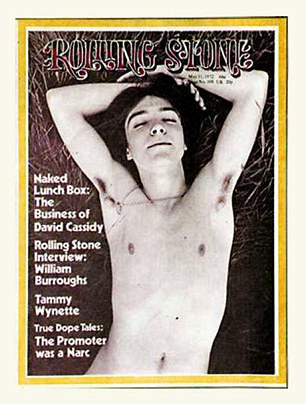 Wenner wouldn’t have been the only staff member at Rolling Stone spending time with Jagger.

Annie Leibovitz, the photographer who made her name with her work for the magazine, admitted she fell under Jagger’s spell while covering the band’s 1972 tour. She described him as a ‘sexy little devil … who drives me insane’.

Three years later, she joined another Stones tour and was sucked into the band’s notoriously hardcore drug-taking culture and became Jagger’s lover. Their affair supposedly inspired the Stones song Memory Motel. Wenner said Jagger told him that the woman in the song — whose ‘eyes were hazel’ and nose ‘slightly curved’ — was his beaky-nosed, 6ft photographer.

The affair continued after the tour ended when Leibovitz joined the Jaggers and Wenners on holiday in Barbados and Wenner witnessed Mick and Annie’s return from their night-time ‘frolic’.

‘He’s got sand on his knees. He’s clearly been out f****** her,’ Wenner recalled indelicately. ‘Bianca comes out with a pot of [iced] water — dumps it on his head.’

Jagger was hardly alone in his passion for Leibovitz. Rolling Stone art director Robert Black recalled looking through her photo contact sheets and seeing her frequently in bed with her subjects.

She maintains that any relationships occurred after the shoot, which was ‘the most important thing’. Leibovitz has declined to comment on the book.

She was famously adept at bending subjects to her will, in 1971 persuading squeaky clean pop pin-up David Cassidy to sprawl naked for a Rolling Stone shoot. Hagan reports that a magazine colleague pepped up Cassidy with his first ever snort of cocaine before delivering him to the photographer.

Yes, it was all going on at Rolling Stone. Leibovitz, Jagger and Wenner were all using drugs heavily in the Seventies, says Hagan. It’s no secret that Keith Richards was a heroin addict but Jagger was also having serious drug issues.

Hagan reveals how the stoned Stone came close to death from a drug overdose, ‘turning blue’ one afternoon in the mid-Seventies at Marshall Chess’s New York home.

His wife, Diane Chess, recalled hearing ‘this slapping and Marshall yelling “Mick! Mick!” enough times for me to see what was going on’. The singer was ‘blue, lips purple’.

Marshall tried to give Jagger mouth-to-mouth resuscitation before he was rushed to hospital.

Leibovitz, for whom the Queen sat for a portrait on her 90th birthday, became a ‘full-blown drug addict’, it is claimed by Hagan.

Wenner’s own astronomic cocaine habit became so blatant he even took it while being interviewed by a reporter. The Manhattan home he shared with his wife contained a specially-made ‘entertainment console’ featuring secret his-and-hers cocaine drawers.

On one occasion, according to the book, Wenner went for lunch with Jackie Kennedy Onassis after a night of heavy cocaine snorting. He developed a violent nosebleed, sending waiters rushing to the table with towels.

Returning to his office with an icepack clutched to his nose, Wenner tastelessly referenced JFK’s assassination, boasting how he had ‘just bled all over Jackie — just like Jack!’.

The Beatles were a band with whom Wenner had a tricky relationship. This was partly because he exploited the acrimony between Lennon and McCartney, but it didn’t help that the Fab Four assumed (wrongly) the magazine’s title implied Wenner considered the Stones a better band.

Wenner became good friends with Lennon and his wife Yoko Ono, putting them (naked) on his front cover — thereby infuriating the other Beatles, who blamed Ono for breaking up the group.

Lennon gave Wenner a landmark interview in 1971, only for the greedy businessman to flout the star’s wishes by taking a $40,000 book deal on it.

Furious at his betrayal, Lennon never spoke to him again, although on December 8, 1980, Lennon was photographed by Leibovitz for a new Rolling Stone interview. Later that night, he was shot dead.

Relations were never great with McCartney, who Wenner got to know after unsuccessfully pursuing New York photographer Linda Eastman, before she became Linda McCartney.

Paul told Hagan he was wary of Wenner, regarding him as Lennon’s spy. In 1973 he relented, agreeing to let Paul Gambaccini interview him for Rolling Stone in London. Wenner insisted they discussed such issues as the ‘feud with Lennon’ and ‘could Linda make it without [Paul]’.

Wenner certainly knew how to bear a grudge. He never forgave the singer Paul Simon for making romantic overtures to his wife Jane, even though she rejected them. For years, Rolling Stone either ignored Simon & Garfunkel or rubbished them.

Elton John faced a similar fate after giving a 1976 interview to the magazine in which he came out as being gay. He didn’t grace Rolling Stone’s front cover again for 35 years, a fact which Elton’s manager and ex-lover, John Reid, blamed on Wenner’s ‘ambivalence’ about his own homosexuality.

Rolling Stone — which relocated to New York in 1977 — was increasingly chaotic. It is claimed Wenner would swig vodka out of the bottle and snort cocaine at his desk, and give drugs — dispensed from the darkroom — to favoured staff.

Staff rarely left the office. ‘Everybody slept on their desks and had sex on their desks,’ recalled a former Wenner publicist. The walls of the ladies’ were covered in graffiti discussing how the men had performed. Wenner boasted he had slept with everyone who worked for him, male or female, but told Hagan the women were not about sex but ‘social conquest’.

According to Hagan, Jane Wenner gave her husband ‘implicit permission to enjoy extracurricular sex, as long as he kept it well hidden’. The marriage ended in 1995 after Wenner came out of the closet, as he announced he was in a relationship with Matt Nye, a fashion designer.

They’re still together and Wenner is still at Rolling Stone’s helm, although has announced he is selling his controlling stake in the magazine, now a shadow of its former self.

Hagan says he always knew Wenner would find his book ‘difficult’ to accept ‘because he’s not a very reflective person’. Yet another icon of the swinging Sixties and Seventies for whom looking back honestly may be just too painful.