The diabetics who’ve made their own new pancreas

After 28 years of injecting himself up to ten times a day with insulin, Tim Street was convinced there must be an easier way to manage his type 1 diabetes.

He was diagnosed with the autoimmune condition — where the pancreas doesn’t produce the hormone insulin, needed to control blood sugar levels — at the age of 13.

Like all of the 460,000 Brits with type 1 diabetes, Tim has to constantly monitor his blood sugar levels and inject insulin many times a day to stay alive.

Traditionally, this involves a finger-prick test. Based on the readings, patients then give themselves enough insulin to keep their blood sugar levels stable, either by injection or by manually pressing a button on a pump — a matchbox-sized electronic device that administers the insulin through a tube attached to the abdomen.

Fact: Too much insulin will cause blood sugar levels to drop dangerously low (hypoglycemia) — leading to cold sweats, confusion, trembling hands and seizures

Another option is a continuous glucose monitoring device, such as the FreeStyle Libre, the patch-like sensor worn by Prime Minister Theresa May (who was diagnosed with type 1 in 2012). This sends glucose readings 24/7 to a mobile phone or reader.

Although it has been available on the NHS since November 2017, a third of local health authorities refused to fund it. However, last November, NHS England announced that all eligible patients will get access to these devices from April.

Tim had a continuous glucose monitoring device and an insulin pump, but even these aren’t without their problems. Doing diabetes ‘maths’ is difficult, as day-to-day management of the condition involves a lot of numbers. Administer too little insulin and blood sugar rises, causing increased thirst and headaches in the short term. Long term, it can result in blindness, kidney failure and damage to blood vessels and skin, leading to amputation.

Too much insulin will cause blood sugar levels to drop dangerously low (hypoglycemia) — leading to cold sweats, confusion, trembling hands and seizures.

Scientists have been working on an artificial pancreas for decades, but progress has been slow.

Last October, doctors from the University of Cambridge revealed they’d trialled such a system on 46 patients for 12 weeks. Those using the system had healthy blood sugar levels for almost 65 per cent of their time, compared with 54 per cent for patients using the existing technology.

The first commercial medical device to automatically deliver insulin to a patient was launched in the UK that month.

A small number of NHS patients are now using it, but fed up with the wait, others such as Tim have taken matters into their own hands. 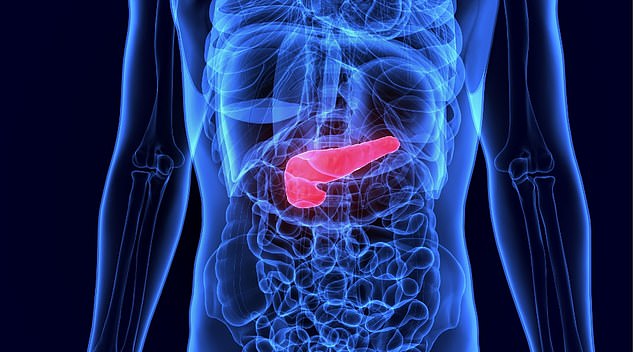 Did you know? It’s estimated that between 200 and 300 people with type 1 in the UK are now using some kind of DIY artificial pancreas

Three years ago, Tim, 43, a specialist in electronic financial trading, adopted a DIY approach. He worked out that if you could create computer software that allows the glucose monitoring device and insulin pump to ‘talk to each other’ via an app on a smartphone, you could create a DIY artificial pancreas. This would allow the pump to dispense the right amount automatically.

Searching online Tim found information to create such a system, and has been using it since 2016. It constantly monitors his blood glucose levels, works out the diabetes maths, and then automatically sends the correct dose of insulin, via the pump, freeing him of testing and injections.

‘Before I set up the DIY artificial pancreas, I was sugar surfing — checking my blood sugar levels every 20 minutes,’ says Tim. ‘I was able to get good blood glucose levels, but it was time consuming.

‘Now, I don’t have to worry or think about my sugar levels anywhere near as much as I did.’

For patients wanting to set up their own DIY artificial pancreas, there are free tools online. Tim adds: ‘All you need is a continuous glucose monitor, insulin pump and the computer coding. All sorts of people have been able to do it.’

It’s estimated that between 200 and 300 people with type 1 in the UK are now using some kind of DIY artificial pancreas.

Libby Dowling, senior clinical advisor at Diabetes UK, says these devices are not endorsed by the charity, but it’s aware people are using them. ‘These are people who are familiar with the technology and extremely motivated to control their diabetes,’ she says.

‘But it doesn’t take the diabetes away; you have to be certain the technology is working, make sure you have enough insulin and the pump is not blocked.’

Professor Roman Hovorka, director of research at the Institute of Metabolic Science at the University of Cambridge, adds: ‘This tech hasn’t been through the regulatory approval. If something goes wrong, there’s no recourse.’

Tim admits that, although he was initially nervous using the device, it’s transformed his life. ‘I no longer have to spend so much time thinking and making decisions about diabetes, so I can focus on other things,’ he says.