The dilapidated Sydney property going for $800,000

Home Sweet Home? The dilapidated Sydney property going for $800,000 even though its only toilet is outside in a rickety graffitied shack

A rundown house in Australia’s most expensive capital city is on the market for $800,000 despite the fact it has no bathroom.

The ‘dilapidated’ 1880s terrace at 110 Morehead Street in Waterloo, in Sydney, is described as ‘not for the faint-hearted’ in the property listing on realestate.com.au.

The ‘blank canvas’ features collapsing walls, damaged floors and mould-stained interiors as well as an overgrown garden complete with a graffiti-covered wooden outhouse.

There is no toilet inside the home or a shower or bathroom amenities.

The ‘dilapidated’ 1880s terrace at 110 Morehead Street in Waterloo, in Sydney’s Inner-West is described as ‘not for the faint-hearted’ in the property listing

The Sydney apartment which is up for sale by Ray White Surry Hills is described as ‘ready for revival’ in the online property listing.

‘This rundown terrace is in need of a complete overhaul essentially offering a blank canvas ready for renovation,’ the listing reads.

On top of the assorted junk littering the backyard, the home comes with a free cabinet which is being used to hold up the laundry’s roof.

Some of the rooms in the old housing commission building are also inaccessible and cut off from use with caution tape.

The home is also heavily smoke stained, with a former occupant reportedly to have smoked between two to three packs a day inside the property. 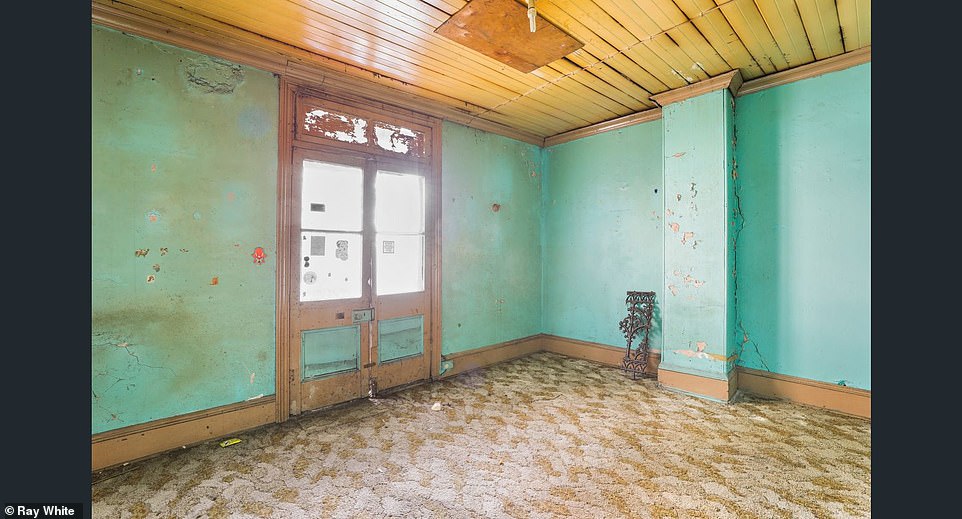 The ‘blank canvas’ features collapsing walls, rust and mould-stained interiors and is likely to require hundreds of thousands of dollars in repairs before its inhabitable 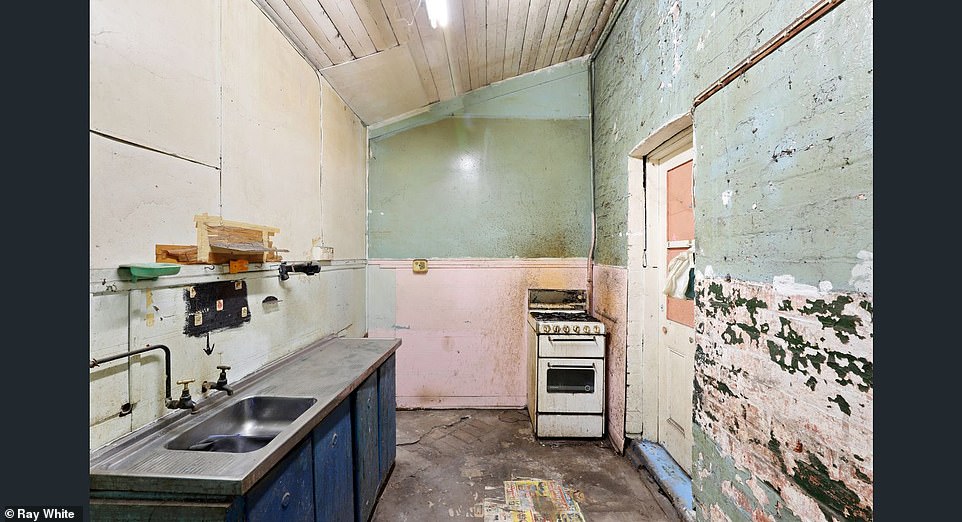 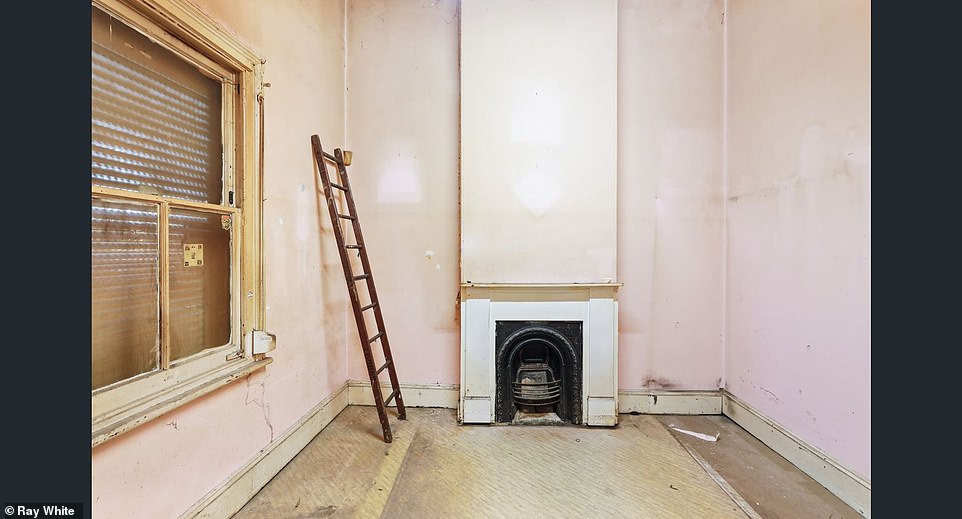 The home is also heavily smoke stained. The former occupant reportedly smoked between two to three packs a day inside the property

Listing agent Jack McGhee said they are expecting there will be significant interest from potential buyers.

‘These kind of properties always get attention because they are rare. There aren’t many of them left,’ Mr McGhee told realestate.com.au

He believes it would take a minimum of $250,000 to get the home to a liveable standard.

‘That would be the bare minimum if you were a builder,’ he said.

‘But you’d probably spend more like $500,000 … it’s hard to say what needs to be done because we don’t know the state of the wiring and things like that.’

A similar property went under the hammer for $4.6million on Surrey Street in Darlinghurst at the end of June, while a weathered cottage in North Sydney sold for $1.4million.

The Waterloo property will go up for auction on August 1. 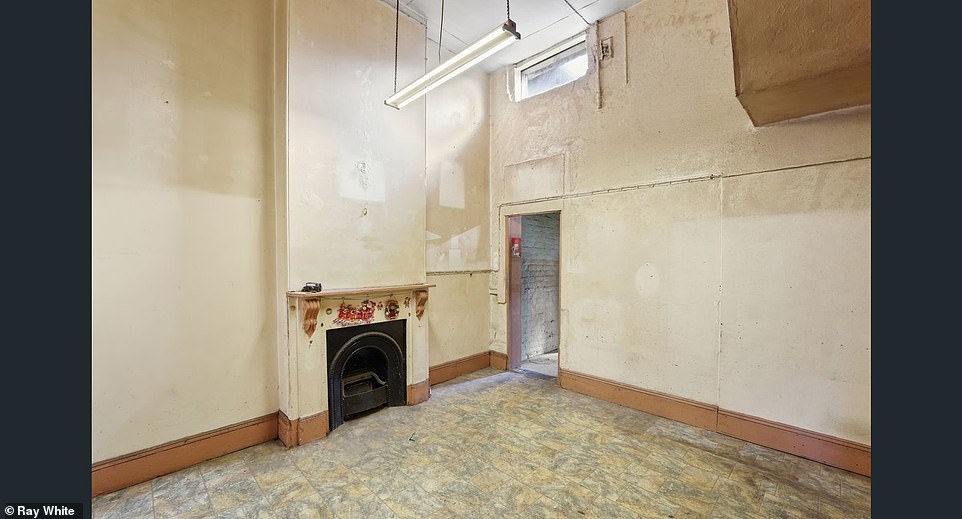 The terrace is described as ‘the ultimate fixer upper’ in a fantastic city fringe location, perched in Waterloo in Sydney’s growing inner-west 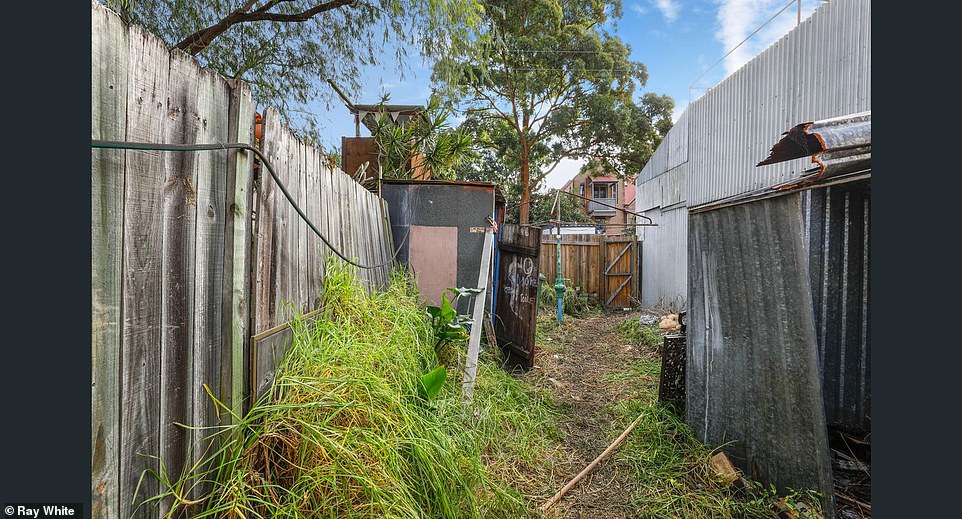