The Domes of Elounda in Crete where families come first

Cretans are proud of their olive oil – and rightly so.

But if weren’t for the Minoans 3,000 years ago, cultivation might have been postponed for several centuries and Crete’s fortunes could have been markedly different.

The Minoans were an industrious lot. In addition to olive oil, they produced wine, pottery, jewellery and a whole range of ‘household goods,’ all of which helped fund the construction of the Palace of Knossos on the north coast near Iraklio.

Sparkling Crete: The harbour at Elounda is a picture of Greek-island charm

For us Britons, a tour of this extraordinary site (built almost 2,000 years before the Roman Empire) is enhanced by knowing that a determined and autocratic Welsh archaeologist called Sir Arthur Evans was the man who discovered it, bought it and began the excavation work in the early 20th Century.

Not everyone agreed with his conclusions but, as long as you take a guide, an hour or so here is well worth the 15 euro entrance fee (free for children under 18). It will give you what politicians like to call ‘perspective’ – in this case a sense of why Crete (birthplace of Zeus) considers itself a part of Greece but not of Greece.

The largest of all the Greek islands, it seeks to plough its own furrow. And despite Greece’s woes, new hotels and villas are popping up here and there, cashing in on there being two airports and a season that lasts until the start of November when the skies are still sunny, the sea still toasty.

Domes of Elounda, in the Gulf of Mirabello not far from ritzy Ayios Nikolaos, opened seven years ago and keeps expanding. Owned by a Greek doctor and built from scratch, it spreads over a huge amount of ground and is the new kid on the block when it comes to holidays specifically targeted at families.

In fact, don’t even think about coming here without a few sprogs in tow. Yes, there’s a ‘Quiet Zone’ on the strip of beach but its effectiveness reminds me of when smokers were asked to sit at the back of the plane.

When the resort is full, there can be 400 people here, billeted in apartments, duplexes and modern villas reached via electric buggies of which there never seem to be quite enough. 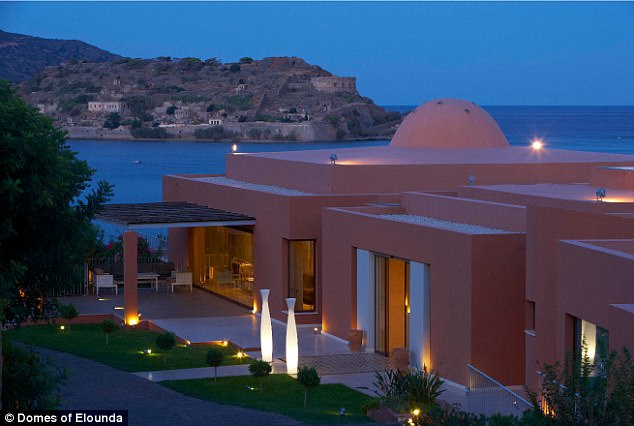 Lots of guests, but plenty of space: When the Domes of Elounda resort is full, there can be up to 400 people in its apartments, duplexes and modern villas

The provision for children is outstanding. Allowing for a tantrum or two, you can drop off a child aged three months at the crèche and pick him or her up again at tea-time. Then there are all sorts of ‘Kid’s Clubs’ for the five-12 year olds; a special games hall for teenagers; a watersports centre; boat rides; four restaurants and I count at least six swimming pools.

Give it a few years for the trees and shrubs to come into their own and the angular architecture might seem, well, less angular. And if the outer walls could be painted white rather than brown you would conjure up a touch of the Santorini spirit. But you’re not here to argue over paint palates – you’re here to prove that a slice of luxury can be combined with traditional family holiday mayhem.

Allowing for a tantrum or two, you can drop off a child aged three months at the creche and pick him or her up again at tea-time

Choose your apartment with care. The best come with haunting views of Spinalonga, a fortress island founded by the Venetians in 1579. It proved to be impregnable and was only handed over to the Turks by treaty in 1715, some 50 years after the rest of Crete had surrendered. But its reputation suffered during the first part of the 20th century when it became a leper colony – the last in Europe – long after drugs to control the condition had been found.

Boat trips to the island come and go from Elounda and from the little hamlet of Plaka, a pleasant walk from the hotel, where there are a couple of decent fish restaurants.

Once on Spinalonga, a sense of isolation and ‘here by the grace of God go I’ prevail. Combine this with a wander later in the day around Ayios Nikolaos, with its smart shops and expensive bars and you will have bought into Crete’s treasure chest of assorted charms.

Far more seasoned fans of Crete than me will tell you that the best of this island remains still largely undiscovered – and that you should get on with discovering it. A bit like Sir Arthur Evans must have thought when he chanced upon Knossos Palace all those years ago.