Twenty years ago the House of Lords, with its hairy-eared hereditary peers, at least had a certain dottiness. Yes, it was an undemocratic outrage and should have been reformed at least in the reign of Edward VII.

But there was something beguiling about the tweedy grandees who would blow in from distant districts to kick the mud off their boots and take part in the national discussion.

Today’s Lords, which yesterday held another buttery discussion about its future, is no less of a democratic outrage but it cannot even claim to be interesting.

The earls and viscounts have mostly gone and in their place we have a new legislative aristocracy: ex-politicians and schmoozers from civic life and its bureaucratic silos. Blandness is valued. Don’t rock the boat, Humphrey.

More than in 1998, today’s peers come from similar careers and spout similar views. They have lost their eccentricity. Eccentrics have an independence of mind. Today’s peers are often just blobs.

They may belong to different politicial traditions but the party they represent is the Party of Smooth Managerialism. What they want is continuity. What they hate is radicalism. Most dread Corbynism and Brexit in equal measure.

Crossbencher Harries mouldered away about how the Government should not have appointed 13 new peers last week (seven are former MPs) because the newbies will delay the slow shrinkage of the House via deaths and retirements. ‘The quicker we can get down to 600, the greater the respect in which this House will be held,’ purred Lord Harries.

The greater the respect? Good one! What he meant was ‘the less we will be regarded as parasitic stooges of inertia’.

The public would possibly like to see the upper house reduced to something far smaller than 600.

But 600 is the figure mentioned in a recent review by Lord Burns, a former Whitehall civil servant. Sound Establishment man, is Terry Burns. He’ll never suggest anything too upsetting. Most peers are delighted by Burns’s review because it does not recommend forced eviction for any current peer. Graze on, sheep. Lord Young has this week noted, with little more than a pointed stare, that the Lib Dems, who currently have a ridiculous 100 peers, have not yet put anyone up for retirement. 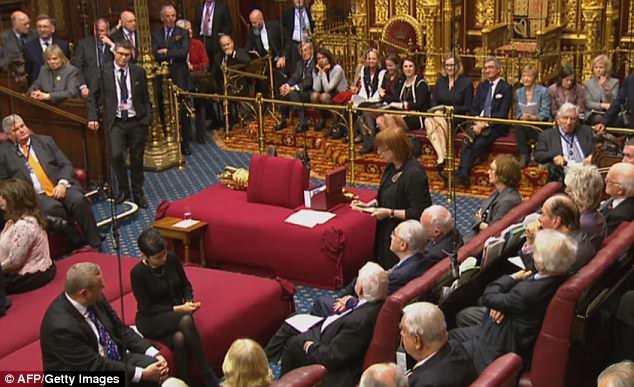 Their leader, Lord Newby, yesterday merely moaned that one of the incoming Tory life peers, Andrew Tyrie, recently accepted the chairmanship of an independent body. Lord Young announced that Tyrie would be sitting as a non-affiliate peer.

On Monday, that unhappy figure Lord Adonis (a former Blair aide bent out of shape by Brexit) made a similar petty point about political allegiances. Ditto Lady Hayman yesterday. Party power is how they view everything but it misses the point. The problem with the Lords is both its size and, now, its very existence.

Several peers yesterday hear-heared when Lord Burns’s report was mentioned. Of course they did.

Burns does not threaten to abolish them and allows for them to remain almost as big as the Commons.

Lord Young, a gracious stick, smeared his replies with charm. He all but admitted that Theresa May’s Government is trying to say nothing on Lords reform. He murmured: ‘This is the 15th question on the composition of the house I have answered – or, to be more accurate, the 15th I’ve been asked.’ Droll laughter.

All those ex-MPs and ex-charity bosses and ex-quangocrats and ex-soapy bishops just want the place to teeter on for another few years until they’ve croaked. That’s all that worries them. The rest of the country may be more impatient for change.