The Dow jumps as JPMorgan, J&J kick off earnings

The Dow closed 500 points higher on Tuesday as hopes that the Trump administration could move to ease coronavirus-induced lockdowns overshadowed worrying quarterly earnings reports from JPMorgan and Wells Fargo.

Profits at JPMorgan Chase & Co and Wells Fargo & Co plunged in the first quarter, as both banks set aside billions of dollars to cover potential loan-losses from the pandemic.

However, their shares rose between 1.3% and 1.5% in premarket trading after plunging 29% and 41% respectively so far this year, as the health crisis crushed business activity and halted deal-making.

Coronavirus-fueled uncertainty also forced Johnson & Johnson to cut its 2020 adjusted profit forecast, but its shares rose 3.5% as it boosted its quarterly dividend, signaling financial stability at a time when a slate of blue-chip firms have suspended dividends to shore up cash reserves.

Analysts expect a 10.2% slide in earnings in the first quarter and a 22.4% slump in the second, according to IBES estimates from Refinitiv.

‘It should come as no surprise that earnings are going to be hit very hard in 2020,’ said Fiona O’Neill, deputy head of equities research at Fidelity International in London.

‘But it would be wrong to focus too much on 2020. Instead, we must look to forecast where earnings will go in 2021 and beyond so that we can continue to identify those companies that are going to emerge from this as winners.’

The benchmark S&P 500 index has recouped about 26% in the past month, powered by historic fiscal and monetary support and early signs the virus outbreak was peaking in some U.S. hot spots, but remains about 22% below its February all-time high. 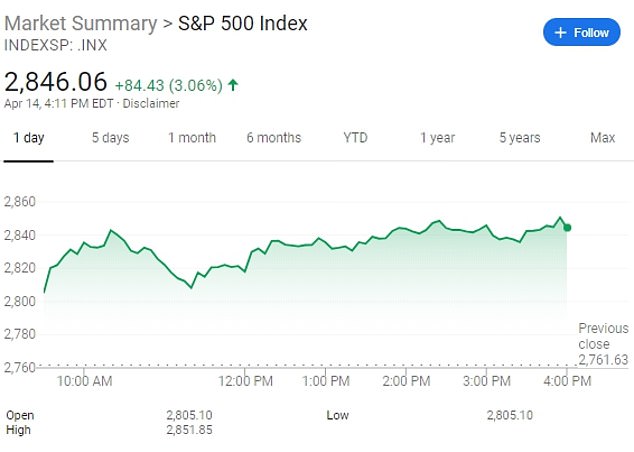 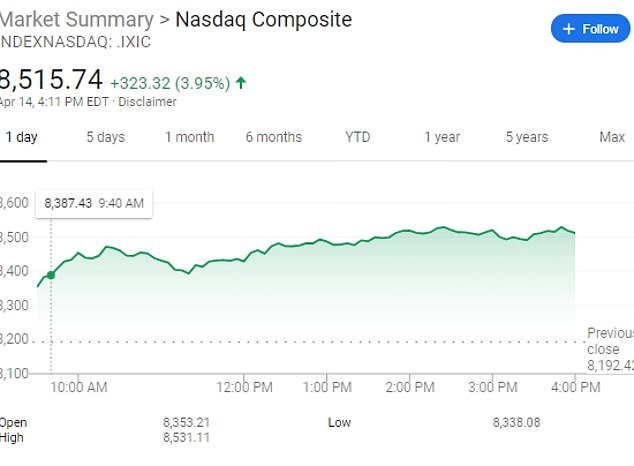 President Donald Trump said late on Monday his administration was close to completing a plan to re-open the economy, but some state governors said the decision to re-start businesses lies with them.

‘The ‘turned the corner’ narrative has a strong immediacy, but there remain creeping concerns about a slow economic re-opening and lasting changes to consumer spending,’ said Yung-Yu Ma, chief investment strategist at BMO Wealth Management in Portland, Oregon.

Meanwhile, data showed China’s exports and imports shrank less than expected in March as factories restarted production, but analysts warned a sure-footed recovery was months away.