The downfall of Roseanne Barr and her suicidal tweet

Back in the 1990s, the much-loved US TV sitcom Roseanne offered a no-holds-barred glimpse inside the rambunctious home of a hard-up, working class family of white factory workers in Illinois.

As the eponymous matriarch of the extended Conner clan, Roseanne – played by the formidable, drawling comedienne Roseanne Barr – was never short of an acid-tongued, deadpan put-down.

The long-running show broke new ground in the vanilla world of American television where happy families were invariably middle class and affluent.

It spoke to millions of Americans whose lives were just like the Conners.

The message of Roseanne was that here was a woman who told it like it was – and more often than not, those in her sights were the proponents of political correctness on the East and West coasts, smug elites for whom the rest of the country barely existed and which certainly didn’t count for much.

No limits: Roseanne barr posted a racist tweet about Valerie Jarrett, which saw her show axed

The election of Donald Trump changed all that, so it was no surprise when the sitcom – which ran on US and British television from 1988 to 1997 – was revived in March this year after a 20-year hiatus.

Like many real American families, the Conners in their most recent incarnation were politically divided – with Roseanne’s TV sister, Jackie Harris, supporting Hillary Clinton.

Barr told the New York Times that she decided to turn her character, Roseanne Conner, into a Trump supporter because she felt it was an ‘accurate portrayal’ of the political preferences of many working class Americans.

‘I just wanted to have that dialogue about families torn apart by the election and their political differences of opinion and how we handle it,’ Barr said. ‘I thought that this was an important thing to say at this time.’

The new show was a huge ratings hit and one of the most successful comedies in years, attracting an audience of 27 million for its season finale last week and raking in millions of dollars for broadcaster ABC.

TV critics lauded it for offering insights that no sociologists or demographers could square with the people who voted in a maverick president and why. 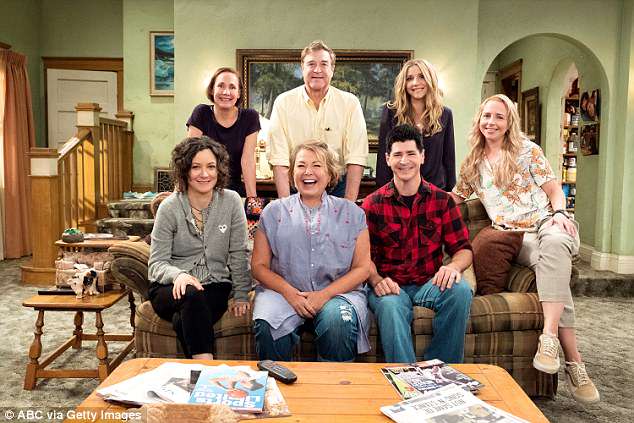 Now that success is in tatters, and it’s fair to say those liberal types she used to mock so mercilessly will feel it’s been their turn to deliver a few home truths to Barr.

She has been dispatched to the showbusiness wilderness, with the series – for which she was paid $2.25million – cancelled after an ugly racist outburst that even her on-screen character would baulk at.

It was on Monday that the 65-year-old unleashed a storm on social media when, in a Tweet, she described Valerie Jarrett, a senior black advisor to Barack Obama, as the offspring of the ‘muslim brotherhood & planet of the apes’.

Yesterday, despite various apologies, Barr seemed set on digging an even deeper hole in which to bury herself.

First she blamed her distasteful comments on sleeping pills, then claimed she thought the object of her attack was ‘white’ and finally unleashed a series of offensive retweets that destroyed whatever was left of her reputation.

Barr has also made clear she feels that she’s been targeted for being a vocal supporter of Trump.

Yet not even the President himself could provide damage limitation, with a Tweet yesterday offering some vestige of support.

Barr’s incendiary insult was the kind of remark she has been making online for years and getting away with. 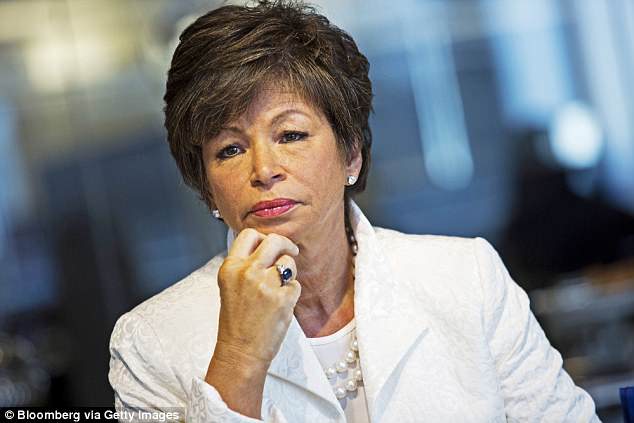 Barr’s suicidal tweet referred to Valerie Jarett (pictured), senior advisor to US President Barack Obama as offspring of the ‘muslim brotherhood & planet of the apes’

But for many, reviving an old racist slur went far beyond what they were willing to tolerate. (Neither, incidentally, does Miss Jarrett have any connection to the radical Muslim Brotherhood organisation.)

On Tuesday, hours after Barr’s late night outburst, her agents at ICM Partners said they would no longer represent her.

Wanda Sykes, a black comedian and producer who worked on the latest Roseanne show, announced she was leaving in disgust.

Within hours, ABC – the Disney-owned TV network that makes Roseanne – not only sacked Barr but said it wouldn’t recommission the series.

As its most successful comedy for years, it was a heavy blow to the network, cast and crew.

Channing Dungey, ABC’s entertainment president, described her comments as ‘abhorrent, repugnant and inconsistent with our values’. Bob Iger, Disney’s chief executive, chimed in, saying: ‘There was only one thing to do here, and that was the right thing.’

Others vehemently disagreed, however, and an almighty Twitter ruckus blew up as it became clear that the show – certainly in its new if short-lived incarnation – has assumed a significance far beyond a mere sitcom for daring to portray Trump supporters as people who weren’t the deranged morons dismissed by his opponents.

Last night the battle over the barring of Barr was still raging on Twitter and other social media sites, principally fought between those who say she has finally met her just deserts for being unforgivably racist – and those who feel a pro-Democrat mainstream media is simply getting revenge on an over-mighty Trump supporter.

Her defenders have posted examples of Trump haters comparing the orange-coiffed US president to an orang-utan to prove the double standards they felt had been applied to Barr.

Indeed, the King of Twitter storms weighed in himself, highlighting the comments made on ABC in the coverage of his presidency.

Trump tweeted: ‘Bob Iger of ABC called Valerie Jarrett to let her know that ‘ABC does not tolerate comments like those’ made by Roseanne Barr. Gee, he never called President Donald J Trump to apologise for the HORRIBLE statements made and said about me on ABC. Maybe I just didn’t get the call?’

As for Barr, while it’s difficult even to attempt to explain away her Planet of the Apes slur, she’s done little to help herself as she’s worked her way through a string of damaging responses.

First she blamed the powerful insomnia drug Ambien for her late-night behaviour, urging her fans not to defend her.

‘It was 2 in the morning and I was Ambien tweeting,’ she wrote. ‘I went too far and do not want it defended.

‘It was egregious [and] indefensible.’ She added: ‘Not giving excuses for what I did (tweeted) but I’ve done weird stuff while on Ambien: cracked eggs on the wall at 2am etc.’ 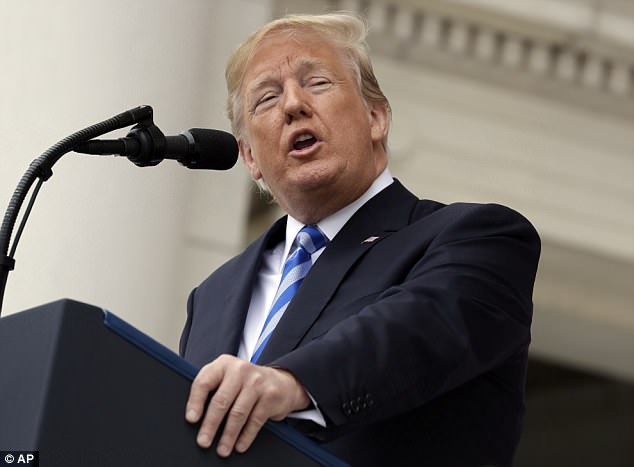 In response to her sacking, Barr also retweeted a doctored image of the black actress Whoopie Goldberg wearing a T-shirt of Donald Trump (pictured) shooting himself in the head

(Sanofi, the French company which makes Ambien, tweeted that ‘while all pharmaceutical treatments have side effects, racism is not a known side effect of any Sanofi medication.’)

Barr then wrote: ‘I apologise to Valerie Jarrett and to all Americans. I am truly sorry for making a bad joke about her politics and her looks. I should have known better. Forgive me – my joke was in bad taste.’

She followed it up with a tweet that she ‘mistakenly thought [Jarrett] was white’.

In a reply to one of her fans, she said: ‘I honestly thought she was Jewish and Persian – ignorant of me for sure, but… I did.’

The comedienne has also attacked her co-stars on the show, accusing them of ‘throwing [her] under the bus’.

Bizarrely, she then re-posted a previous Tweet showing a picture of Miss Jarrett alongside one of a female chimp character from the original Planet of the Apes films, and a hoax tweet claiming Miss Jarrett had said she wanted to make America more Islamic.

Barr also retweeted a doctored image of the black actress Whoopie Goldberg wearing a T-shirt of Donald Trump shooting himself in the head. It certainly isn’t the behaviour of someone keen to show contrition.

While there really is no conceivable excuse for the offending tweet, many will rue the passing of Roseanne the show, if not Roseanne the star. Barr has always fought against neat stereotypes.

A Jewish-born former stand-up comedian from Salt Lake City in Utah, she made her first TV appearance in 1985 on the Tonight Show with Johnny Carson.

The actress, who has been married three times and has five children, won an Emmy and a Golden Globe for her work on Roseanne.

At one stage she was the second highest paid woman in showbusiness, earning $21million for the last series in 1997. Her net worth is reportedly £60million.

In many ways, Roseanne was ahead of her time and a forerunner of the MeToo feminist movement now holding sway.

She had strong feminist views and insisted on having gay characters in the series long before they were de rigeur in Hollywood shows.

Barbara Ehrenreich, a political activist, once called Barr a ‘working-class spokesperson’ representing ‘the hopeless underclass of the female sex: polyester-clad, overweight occupants of the slow track; fast-food waitresses, factory workers, housewives, members of the invisible pink-collar army; the despised, the jilted, the underpaid’.

Barr was, she said, the queen of ‘the kind of class-militant populism that the Democrats, most of them anyway, never seem to get right’.

It’s no coincidence that the show did so well in the Midwest. But, of course, some liberal critics couldn’t bring themselves to watch it, complaining that the real Roseanne was too toxic for them.

Now those critics can relax and no longer worry about ‘contaminating’ themselves with Roseanne Barr and her opinions.

Roseanne has gone and, whatever one thinks of its star, with it one of the more refreshing and realistic shows to hit calcified American TV for many years.