Fit and healthy: Nicola Shepherd, 29, is slim and healthy thanks to her active lifestyle

Standing up from her desk to take a phone call at work one morning, Nicola Shepherd was struck with sudden breathlessness and an aching sensation in her chest.

As a keen runner and otherwise in good health, Nicola, 29, initially assumed she had simply stood up awkwardly, or had a funny turn that would soon pass.

So the social worker finished her phone call and tried to resume her work. But the ‘funny turn’ didn’t pass — the pain continued and she was struggling to breathe.

‘When a colleague asked if I was OK, I burst into tears, suddenly scared of what was happening,’ recalls Nicola, who lives with her boyfriend in Warrington, Cheshire.

‘It didn’t make sense because I knew I was in good health — I’d done a 5km run at the weekend and got a personal best. I hoped the breathlessness would pass, but when it hadn’t after an hour, I knew I needed to see a doctor.’

Nicola’s mother collected her from work and drove her to A&E, where an X-ray revealed that Nicola’s right lung had collapsed.

‘Strangely, it had crossed my mind that my lung might have collapsed,’ says Nicola. ‘It wasn’t a condition I knew anything about, but there didn’t seem any other explanation for the pain or how breathless I felt.’

A collapsed lung, or pneumothorax, can occur due to trauma or an injury to the lung and is most common among smokers, due to the damage done to their lungs by cigarettes, but this was not why non-smoker Nicola had one.

She had an altogether different risk factor: being 5ft 8in tall and slim.

Nicola had a spontaneous pneumo-thorax, a collapsed lung occurring suddenly in patients who are non-smokers with no existing lung conditions. It is most common among 20-to-40-year-olds, although why is unclear.

A collapsed lung occurs when a small tear forms on the lining of one lung, typically as a result of small air pockets or blisters, known as blebs, bursting. Blebs develop over years and fill with air, growing to be up to 2cm wide. They are symptomless and only the largest can be detected on X-rays, so most people would never know they were there.

However, they can suddenly burst without reason and as a result, air from that lung leaks into the chest cavity. The pressure of that escaped air causes the lung to collapse — like the emptying of a balloon. As a result, the body receives only half its usual oxygen levels and in rare cases, it can be life-threatening. 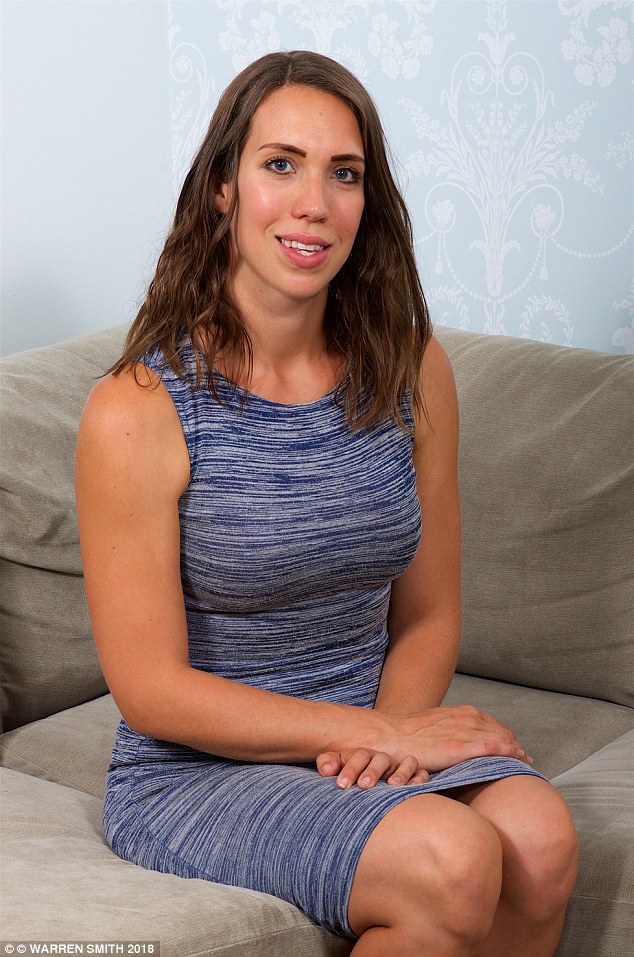 Unusual: Nicola had a spontaneous pneumo-thorax, a collapsed lung occurring suddenly in patients who are non-smokers with no existing lung conditions

The first sign, as in Nicola’s case, is breathlessness that comes on out of the blue, and chest pain brought about by the escaping air and small drops of blood from the tear irritating nerve endings in the cavity lining. ‘In most cases, the patient will be doing nothing — or something as simple as switching on a light — when the blister happens to burst,’ says Professor Stefan Marciniak, an honorary consultant respiratory physician at Addenbrooke’s Hospital in Cambridge.

‘Patients often find their way to us when their GP sends them for a chest X-ray or if they walk into A&E, worried about a sharp chest pain.’

The taller you are, the more you are at risk, as it increases the chance of developing blisters in the first place, says Professor Marciniak. ‘The simplest way to understand this is to compare the lung to a wet sponge,’ he says.

‘If you suspend a sponge by holding it from one end, the top-most part of the sponge experiences the most stretch, causing its holes to be pulled larger at the top versus the bottom. Taller, longer lungs experience more stretch at the top, and when the stretch is very high, little blisters can form.’

Teens undergoing a sharp growth spurt can also be at increased risk because of the added stretch exerted on the lungs, as are slim people with a Body Mass Index (BMI) under 18.5.

‘The increased likelihood in tall, slim people could be because the lung structure is physiologically different,’ explains Dr Siddiq Pulakal, a consultant in respiratory medicine at University Hospitals South Manchester.

Indeed while more than 9,000 people need hospital treatment for a collapsed lung each year, Professor Marciniak estimates the incidence is four times more common in men than women, probably due to height differences.

In a tall, thin, young man, the risk of having a spontaneous collapsed lung could be as high as one in 200, he says; 50 times higher than the one in 10,000 risk across the general population.

Risk: A collapsed lung occurs when a small tear forms on the lining of one lung, typically as a result of small air pockets or blisters, known as blebs, bursting

Though not immediately life-threatening in most young people, it can be if a severe leak is left untreated and the lung continues to collapse.

‘In those cases, the heart doesn’t receive enough oxygen and the outcome can be fatal, though this is usually in cases where the patient has suffered a trauma or chest injury,’ says Dr Pulakal.

‘If a spontaneous collapsed lung is treated quickly, there is no long-term damage and other organs are not affected.’ The treatment is initially a lung aspiration, where — with the patient under sedation — a needle is used to draw escaped air from the chest cavity, alleviating pressure and allowing the lung to re-inflate.

Nicola was given a lung aspiration but within three hours another X-ray showed her lung had collapsed a second time. ‘It suddenly seemed very serious and I felt as if I couldn’t draw in enough breath,’ says Nicola.

I couldn’t breathe properly and wondered if it would ever heal. It was hard to believe what was happening — a week earlier I’d been in perfect health.

This time she had an intercostal chest drain insertion, where under anaesthetic a drainage tube is inserted into the ribcage, containing a one-way valve which slowly draws out the air.

The end of the tube sits in a tub of water, with the number of bubbles letting doctors determine if there is still air present in the chest cavity. ‘I was especially scared because my mum had already left the hospital, as we assumed I’d be sent home that evening,’ adds Nicola. In fact she was in hospital for another week as repeated X-rays showed her lung had failed to properly re-inflate.

‘I still couldn’t breathe properly and wondered if it would ever heal,’ recalls Nicola. ‘It was hard to believe what was happening — a week earlier I’d been in perfect health.’

But as Professor Marciniak explains: ‘If you have one collapsed lung, the risk of a second is 30 to 50 per cent. If you’ve had two, the chances are you’ll have many more, so we then advise surgery, which can prevent further collapse.’

Nicola underwent pleurectomy surgery to remove the thin layer of tissue between the lung and the chest wall, so the lung sticks to the chest wall instead. This means the lung cannot deflate again because there is nowhere for the air to go.

It reduces risk of recurrence to below 5 per cent. Surgeons also remove the blisters on the lung, and close any large holes, known as a blebectomy.

Nicola’s case was unusual — as most people have repeated collapsed lungs over time before they are offered surgery.

Most patients make a full recovery, though whatever predisposed them to a pneumothorax means the other lung could be at risk.

After her scare, in November 2014, Nicola was told to live life as normal, but her consultant warned her to avoid activities which could put her left lung under excess pressure.

She must now be cautious, about flying because the decreased air pressure on a flight can cause any volume of trapped air to rise, which could result in existing air pockets on the lung bursting.

‘He told me not to treat myself like a patient, but advised that I shouldn’t fly more than a few times a year. And I can never go scuba diving because of the intense pressure it puts on the lungs,’ she says.

‘Once I started running again I had coughing fits at first, as all the tubes down my throat had aggravated my respiratory system. But I soon felt back to normal. I’m relieved it hasn’t happened again — but if it does, I’ll know exactly what to look out for.’