The electrical ‘sixth sense’ that turns sharks into killers

Sharks are equipped with an electrosensing organ that allows them to detect even the slightest disturbances from nearby prey amid the ‘blizzard of electric noise.’

According to a new study, this would be much like a person having ‘superhuman hearing,’ in which even a whisper may sound like a blaring horn.

While sharks have a similar electrosensory system to sea skates, researchers found their responses to stimuli were very different, with sharks always appearing to be tuned toward catching prey.

Sharks are equipped with an electrosensing organ that allows them to detect even the slightest disturbances from nearby prey amid the ‘blizzard of electric noise.’ According to a new study, this would be much like a person having ‘superhuman hearing.’ File photo

‘Sharks have this incredible ability to pick up nanoscopic currents while swimming through a blizzard of electric noise,’ senior author David Julius, Ph.D., professor and chair of physiology at the University of California, San Francisco.

‘Our results suggest that a shark’s electrosensing organ is tuned to react to any of these changes in a sudden, all-or-none manner, as if to say “attack now.”’

Sharks and skates – the winged evolutionary cousins of sting rays – both have electrosensory organs called ampullae of Lorenzini.

Electricity passes through the organs through pores around the animals’ mouths, and makes its way to spherical cells called electroreceptors.

These relay information to the nervous system.

While skates uses theirs to find food and mates, however, sharks appear to use their ‘sixth sense’ only to find the next meal.

This response may be dictated by genes that encode for proteins called ion channels.

‘They play a major role in controlling how information flows through a nervous system. Mutations in ion channels can be devastating and have been linked to a variety of disorders, including cystic fibrosis and some forms of epilepsy, migraines, paralysis, blindness, and deafness. 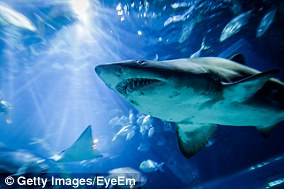 Shark have electrosensory organs that act like a ‘sixth sense’

The ampullae of Lorenzini are visible as small pores in the skin around the head and on the underside of sharks, skates, and rays.

Each pore is open and connected to a set of electrosensory cells by a long canal filled with a clear, viscous jelly.

The AoL jelly likely contributes to this electrosensing function, yet the exact details of this contribution remain unclear.

‘Skates and sharks have some of the most sensitive electroreceptors in the animal world,’ said Dr David Julius, professor and chair of physiology at UCSF and senior author of a recent study on the mechanism.

‘Studies like this highlight the role in a single ion channel can play in any nervous system, shark, skate, or human.’

In the new study, the researchers compared the currents recorded from skate cells with those from the chain catshark.

This revealed that the cells were sensitive to the same range of voltage zaps – but, they responded differently.

While skates’ cells responded with varying currents, sharks’ were much larger and consistent.

And, regardless of the size of voltage zaps, the sharks’ receptors released the same number of neurotransmitter packets. 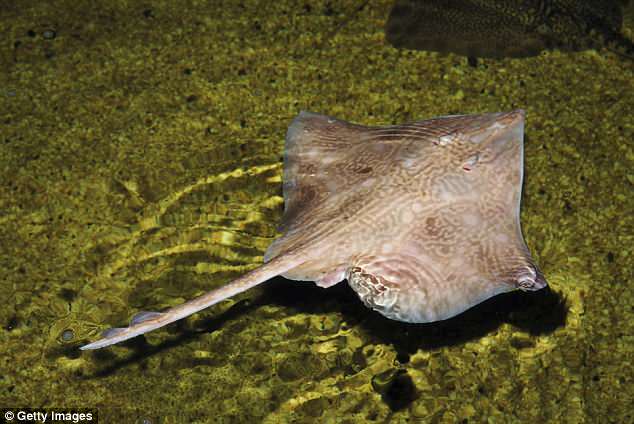 While sharks have a similar electrosensory system to sea skates, researchers found their responses to stimuli were very different, with sharks always appearing to be tuned toward catching prey

Skates, on the other hand, varied their responses according to the stimulus.

The researchers also found that almost every field caused sharks’ breathing rates to reach levels typically seen when they smelled food, suggesting their response is geared toward hunting.

‘In almost every way, the shark electrosensory system looks like the skate’s and so we expected the shark cells to respond in a graded manner,’ said Nicholas W. Bellono, Ph.D.

‘We were very surprised when we found that the shark system reacts completely different to stimuli.’