The END of fatal food alergies?

When I was a medical student, I witnessed a child almost die from anaphylactic shock, the result of a severe allergic reaction to accidentally eating something containing peanuts. It was particularly traumatic for everyone involved because in those days nut allergy was relatively rare.

No longer. Like many other food allergies, rates of nut allergy in the UK have soared, tripling over the past 30 years. Somewhere between one and five per cent of children now have a serious enough problem to warrant treatment.

Children tend to grow out of other common childhood food allergies to milk, eggs, wheat or shellfish. But nut allergies seem to be for life. It is often serious, and can be fatal.

Like many other food allergies, rates of nut allergy in the UK have soared, tripling over the past 30 years. Somewhere between one and five per cent of children now have a serious enough problem to warrant treatment

Earlier this month, two men working in a takeaway restaurant were jailed for the manslaughter of 15-year-old Megan Lee. She died after eating a takeaway contaminated with peanuts. She had told the restaurant, when placing the order, that she had a nut allergy, but it turned out that standards of hygiene in the kitchen where the food was prepared were minimal, allowing cross contamination.

And it would be impossible to forget the tragic case of Natasha Ednan-Laperouse, 15, who died on a flight to Nice in July after suffering an allergic reaction to a Pret a Manger baguette that contained sesame seeds.

The rise and rise of nut allergy is frightening. But for sufferers there was, this week, some good news.

A study carried out by British and American researchers and published in the prestigious New England Journal Of Medicine showed that by regularly exposing teenagers and children with severe peanut allergy to minute quantities of nuts they could be desensitised, to the point where they could safely tolerate eating a couple of nuts without becoming dangerously ill. 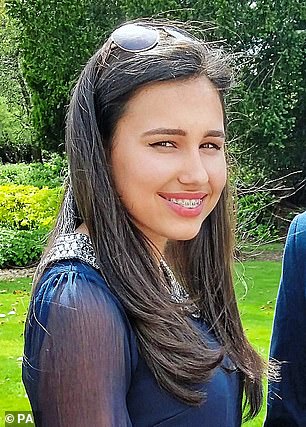 It would be impossible to forget the tragic case of Natasha Ednan-Laperouse, 15, who died on a flight to Nice in July after suffering an allergic reaction to a Pret a Manger baguette that contained sesame seeds

For this study, 372 children between the ages of four and 17, and with severe peanut allergy, were given gradually increasing doses of a drug called AR101 – essentially peanut flour in a capsule.

They started out with tiny doses, just 0.5 milligrams, the equivalent of the amount you would find in one six-hundredth of a large peanut. Over time, the dose was increased until the children were eating the equivalent of a whole peanut.

By the end of the trial, which lasted 24 weeks, two thirds of the children were able to eat the equivalent of a couple of peanuts without having a bad reaction, which is pretty remarkable. It doesn’t mean they will be rushing out to eat peanut butter sandwiches, but it does mean they will no longer react to small amounts of peanut that might make their way into foods because of kitchen contamination, and tragic deaths like Megan’s might soon become a thing of the past.

Professor George du Toit, a paediatric allergy consultant at Evelina London Children’s Hospital, and the study’s lead researcher, thinks this could be a real breakthrough.

‘The results of this ground-breaking study are very promising and suggest that we will be able to protect children who are allergic to peanuts from having a severe reaction after accidental exposure,’ he said.

‘Until recently there has been nothing to offer peanut allergy suffers other than education around peanut avoidance and self-treatment of reactions.’

The study follows a smaller one done in Australia a few years ago.

Researchers gave 56 children with peanut allergy either a placebo or a pill containing a mixture of peanut protein and a probiotic, called Lactobacillus rhamnossus. 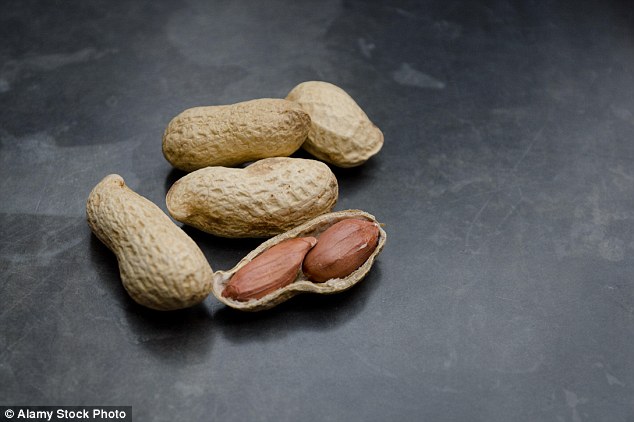 Researchers gave 56 children with peanut allergy either a placebo or a pill containing a mixture of peanut protein and a probiotic, called Lactobacillus rhamnossus

A probiotic is the name given to living bacteria you can swallow and which help bolster the other ‘good’ bacteria in your gut. The researchers were hoping the mix of probiotics and low doses of peanut protein would damp down and ‘re-educate’ the children’s immune system – and it certainly seemed to.

They found, after 18 months of taking the pills, that 82 per cent of the children given the mix were now tolerant to peanuts, whereas only four per cent of the placebo group had become tolerant.

The researchers asked those who were now tolerant to peanuts to go on eating them, and they followed this group for another four years. For most it went on working: 70 per cent still had full tolerance four years after stopping treatment.

What about adults? One study with 41 adults, again using AR101, ended up with more than half of them dropping out, partly because of side effects, which included abdominal pain, vomiting, itching and nausea. But 85 per cent of those who stuck with it were able to pass a peanut challenge at the end of the study. The company who make AR101 hope to get approval for its use early next year.

HOW ALLERGIES DEVELOP… AND KILL

People often get confused by the differences between food allergies and food intolerances. 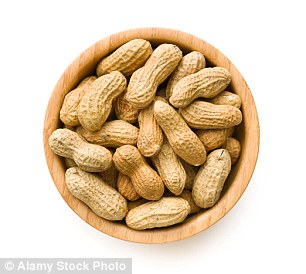 If you are allergic to one of these substances the body’s immune system produces antibodies to fight the allergen and releases the chemical histamine, which causes the symptoms of allergy. Histamine dilates the blood vessels, causes the mucous membranes (lining tissues of the nose and airways) to swell, and stimulates the glands in the nose and the respiratory passages to produce mucus.

The respiratory passages contract, making it difficult to breathe. Anaphylaxis is the name given to the most severe of these symptoms and can lead to death in minutes if not treated.

In order to diagnose an allergy, it is often enough to tell the doctor when, where and how you get the symptoms. If there is doubt, they can carry tests, exposing the skin to a tiny amount of the suspected allergen to see if there is any reaction. When I had this test, while investigating the subject of allergies, I found I had a reaction to cat hair, even though I have a cat, and have never noticed any symptoms. This low-level allergy, I was told, didn’t warrant action. So the cat stayed.

Likewise, it’s thought that if you tested every single person for peanut allergy, about 15 per cent of people would have a reaction. But that doesn’t mean they’d all have a problem worth worrying about. Most minor allergies are treated by over-the-counter antihistamines.

Those at risk of anaphylactic shock are often prescribed an EpiPen, a device containing a spring-loaded hypodermic needle designed to deliver a dose of the hormone adrenaline, which suppresses immune response.

This works quickly to counter the fatal effects of anaphylaxis by relaxing the muscles in the lungs to help breathing, reversing swelling and maintaining blood pressure. It can be a lifesaver, but it does not prevent further allergic reactions. Aside from this, those with severe allergies are just told to stay vigilant and avoid potential allergens to minimise risk of further anaphylaxis.

Food intolerances, on the other hand, typically cause inflammation, bloating and abdominal pain, but there is no immune reaction. That means there is no reliable blood test for a food intolerance and sending off for one of those tests you see advertised is almost certainly a waste of money.

The only real way to discover if you have a food intolerance is to eliminate the food from your diet for several weeks and see if you get better. You can find out how to do this on my website, cleverguts.com.

WHY PREVENTION IS BETTER THAN TREATMENT:

It is obviously far better to stop an allergy developing in the first place, rather than waiting to treat it. And it turns out that one of the best ways to do this, for peanut allergy at least, is to expose children to peanuts from a very early age.

Could the current epidemic of peanut allergy be partly the result of well-meaning Government advice issued decades ago?

When my wife Clare was pregnant with our first son, she was told to avoid peanuts and to avoid giving him peanuts when he was young. It seemed to make sense that if kids aren’t exposed to peanuts they won’t become sensitised. Yet even then some doctors were puzzled by the fact that Israeli children, who eat lots of peanut products from a very early age, were ten times less likely to develop peanut allergies than Jewish children of the same age in the UK.

A group of researchers from King’s College, London, did a big study where they randomly allocated very young children to either getting fed peanut products or avoiding them completely.

Current Government advice is now almost exactly the opposite of what it once was.

Parents of very young children, particularly those who have eczema or have a family history of allergy, are now actively encouraged to feed children from the age of four months onwards foods containing pureed peanuts or peanut extract (but not whole peanuts, as these can cause choking).

SO WHAT ABOUT OTHER ALLERGIES?

Could lots of other allergies be treated with desensitisation therapy? There is no reason to think not. At the moment, AR101 is peanut specific but many people with peanut allergy also have allergies to other nuts, so those may well be the next treatments developed. But it is only worth doing if the allergy has serious consequences and the child is unlikely to outgrow it.

So there is little point using this approach with children who have an egg allergy as most will become naturally tolerant as they get older. That said, desensitisation has been successfully used for hay fever and to treat people who suffer from wasp and bee sting allergies.

A recent study, carried at Imperial College, London, using grass pollen extract in weekly injections or a daily pill, found that both led to dramatic improvements, but the treatment had to be continued for at least three years to produce a lasting effect. As a hay fever sufferer, I was keen to try it out and took the pill for nine months, a few years back.

During the trial, I didn’t suffer any symptoms. But I didn’t stick to the treatment… and the next year my hay fever came back.