The end of the road for me and Top Gear: Matt LeBlanc

With more twists and turns than an Alpine pass, the Top Gear saga keeps rumbling on.

First there was Jeremy Clarkson’s sacking for punching a producer four years ago, then his two co-stars James May and Richard Hammond joined him when he defected to Amazon to make The Grand Tour.

In came Chris Evans, co-hosting the revamped series with former Friends star Matt LeBlanc, but his torturous stint in the driving seat lasted just one series amid claims he and Matt just hadn’t got on.

Matt then took up the reins and navigated his way through two largely well-received series with co-hosts Rory Reid and Chris Harris, but now he too is off after the new series ends, to be replaced, controversially, by former cricketer Freddie Flintoff and Paddy McGuinness.

Former Friends Star Matt LeBlanc, 51, revealed his decision not to return to Top Gear was influenced by the fact he misses his daughter, friends and mother

And the reason for Matt’s departure? His 15-year-old daughter Marina by ex-wife Melissa McKnight.

‘I didn’t decide not to come back until after we’d finished making the series,’ he tells me when we meet in Los Angeles.

‘When it was all done we had a little celebration. Some champagne came out and we all said, “Wow, that was a good batch of shows.”

‘I didn’t feel sad because I hadn’t yet decided not to renew my contract.’

It was only when he was back home in California, relaxing on his beloved cattle ranch near Santa Barbara that he shares with Marina, that he had second thoughts.

‘Having one full-time job is a lot of work, so I don’t know how I managed two.

‘I was jet-lagged for three years! I had some time off, and realised I wasn’t sure about going back to Top Gear.

‘I’d had time to think and to spend with my daughter and I realised how much I missed her – and my friends and my mother and sleeping in my own bed.

‘I realised you need balance between work and play, and mine was out of whack.

‘It was time to move on, which was a great call.’

But for viewers there’s a new five-part series to enjoy, with its familiar mix of hair-raising challenges, fun stunts and impossibly fast cars.

The first episode finds Matt and Chris in Norway, where they try to prove the 208mph Ferrari GTC4 Lusso and the 190mph Porsche Panamera Turbo Sport Turismo can work as family cars. Their wacky trip takes in Vikings, chainsaws and lots of tunnels. 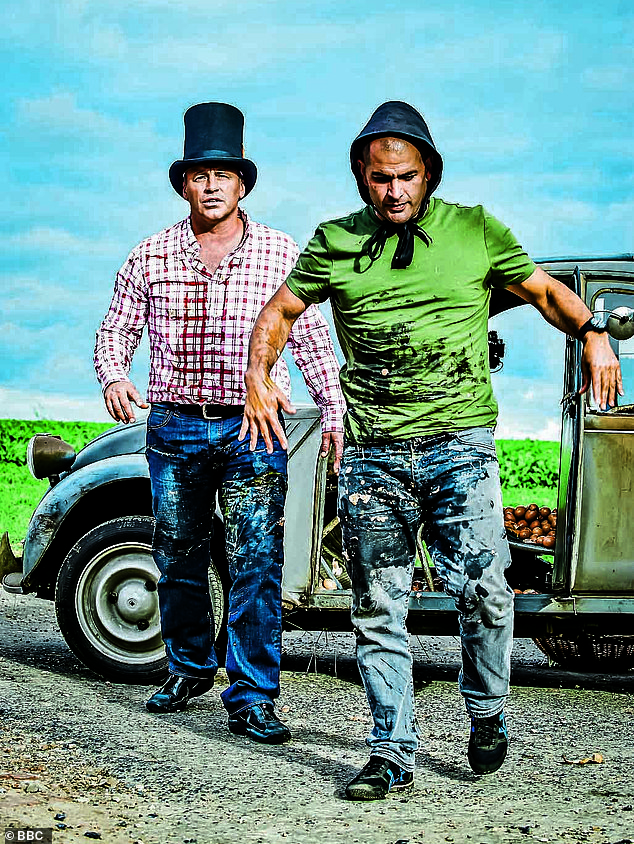 Matt (pictured in Normandy with Top Gear co-host Chris Harris last year) who juggled Top Gear with starring in Man With A Plan, says he felt jet-lagged for the past three years

In the second episode Matt and Chris are in Sri Lanka, testing the versatility and durability of the tuk-tuk motorised rickshaw.

Disaster strikes when they try to take one up Sri Lanka’s most notorious mountain track.

Show three finds Chris and Matt in Spain, testing out the new 200mph Bentley Continental GT, while the fourth sees the chaps buying three second-hand classic cars for £6,000 each (then the cost of the cheapest new car in Britain, the Dacia Sandero) – a Mercedes, a Rolls-Royce and a Bentley – and putting them through a six-hour endurance race.

It’s all been quite a journey for Matt but he says he has nothing but the fondest feelings for Top Gear, not least because he’s been dating Aurora Mulligan, a producer on the show.

‘I had a great experience, which I’ll never forget.

‘The cars were a lot of fun, and I made some good friends there – particularly Chris Harris, who I spent a lot of time with.

‘One of the most fun stunts we did together was when we took a Citroen 2CV across a field in Normandy last year, carrying a basket of eggs.

‘I didn’t know much about that car before that, except that it was made famous in the Bond movie For Your Eyes Only. But Chris owns one and we used his car in the shoot. 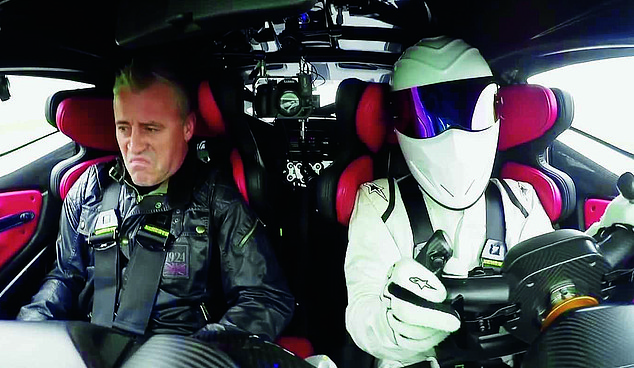 Matt revealed going top speed in an Aston Martin Vulcan for Top Gear was one of the scariest times he’s experienced in a car. Pictured: In the Vulcan with The Stig

‘It’s a charming car, and it turned out that one of the original design briefs for it had been that it had to be able to transport a farmer and his wife carrying a basket of eggs and wearing their Sunday church hats across a field without breaking any eggs.

‘So we took that idea and ran with it. We took a basket of eggs, and we didn’t do so well because there were eggs everywhere!’

Not all the stunts were quite as much fun as testing the 2CV’s suspension, though, and Matt blanches as he recalls being driven around Top Gear’s Dunsfold track in Surrey at top speed in an Aston Martin Vulcan by faceless speed merchant The Stig.

‘But we went round the track in it with The Stig driving frighteningly fast. It has to be one of my scariest times in a car ever.’

As the son of a mechanic, Matt grew up with cars.

‘We were a very blue-collar family, where everybody wanted to do their own work on their own cars – to modify them, make them go faster,’ he recalls.

These days he has ‘15 or 16’ cars that he keeps in the enormous garage he built at his ranch.

‘They’re not all Ferraris,’ he laughs, ‘some are just garbage. I wouldn’t say I’m a collector, more an enthusiast.

‘A collector just collects, but I drive them all.

‘I can find something to fall in love with about any car – it could be a VW Beetle on its last legs. Engines are like 3D jigsaw puzzles. 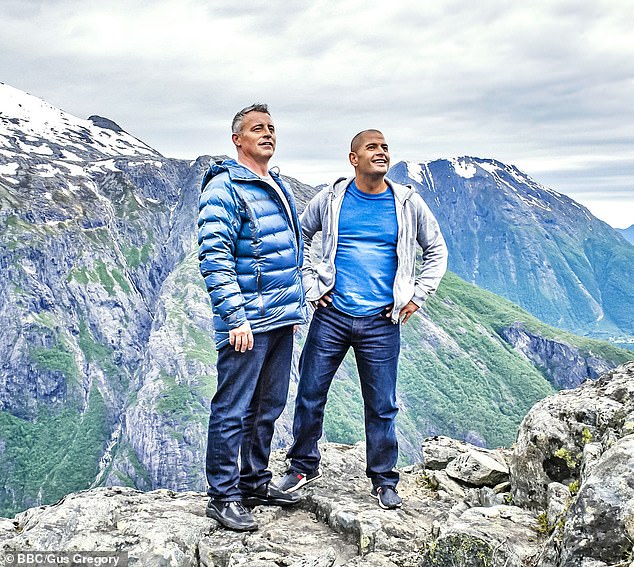 Matt LeBlanc (pictured with Chris Harris) says he can find something to fall in love with about any car, when he’s not tinkering with cars he’s roaming his ranch

‘If you take an engine apart and lay it out on the table, it’s just all these inanimate objects; but if you put them together in a certain way, that harnesses an explosion that produces motion, which is still amazing to me. It’s magic in a way.’

When he’s not tinkering with cars, he says he’s contentedly roaming the 1,200 acres of his ranch, which he bought in 2002 and admits he still sometimes pinches himself to realise is his.

‘We raise cattle and rodeo cows – we don’t milk those, we just raise them until they’re old enough to go into rodeos.

‘I love my ranch.

‘My daughter’s learned all about nature there – we go into the woods and go camping and there are deer and coyote and wild pigs and it’s just fantastic.

‘My parents split up when I was small and for the first eight years of my life, it was just me and my mother living in a small apartment, and the landlord had a little grass lawn at the back.

‘It was his pride and joy, he had a little vegetable garden and I wasn’t allowed to go on the grass.

‘I remember as a little boy thinking, “Someday, I’m going to have a big yard.”

‘And to this day I look around my ranch and think, “Yeah – that’s a big yard.” It’s one of the things I’m most proud of.’

After Friends finished in 2004 he embarked on the spin-off Joey, based on his character Joey Tribbiani, which was panned by critics and ended after just two series. 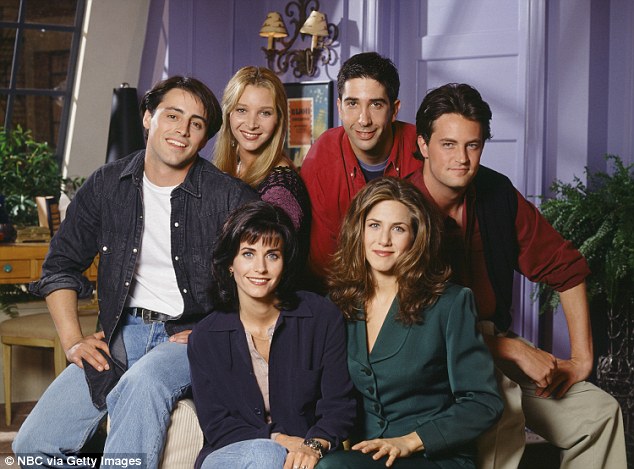 Matt had his life transformed after starring in Friends fifteen years ago, he compares the hit sitcom to Man With A Plan. Pictured: On Friends with his co-stars

He later had more success sending himself up in Episodes with Tamsin Greig and Stephen Mangan, which ran for five series until 2017.

In Man With A Plan he plays an old-fashioned husband and father who receives a shock when he’s left to look after the children when his wife goes back to work.

‘We’re in season three and the writers have really found their feet,’ he says.

‘It’s the kind of show I like to be on, where there isn’t just one main character, but all the characters are as important as each other.

‘Anyone can make a joke or be the focus of the story. Friends was like that, and that’s where I cut my teeth.’

Fifteen years after the demise of the show that changed his life, he says he’s as pleased as ever to have been a part of it.

‘It’s probably the thing I’m most proud of in my whole career.

‘Recently Netflix was going to take it off their schedule, but there was a big uproar from the fans so they had to bring it back.

‘It’s been 15 years since the show ended, and 25 years since we started it. It’s amazing it still feels relevant today to so many people.’

Ask him if his daughter is part of the new generation of fans, and he laughs. ‘It’s not her thing!’ he says.

‘Friends of hers have pointed it out to her – and maybe one day she’ll get into it herself too – but right now I think she thinks it’s a little too much Dad for her.

‘Now I’m home so much, she thinks she sees me enough for her liking!’