After award-winning hits of classics such as the Andrew Scott Hamlet, Oresteia and Mary Stuart, Robert Icke ends his stint as an associate director at the Almeida with a dense but intriguing work that is very much of the moment.

Icke has written as well as directed this, which is based on a play by the Austrian Arthur Schnitzler that touched on anti-Semitism, medical ethics and national identity in 1912.

But it tackles much more too – it makes Brian Clark’s 1978 drama Whose Life Is It Anyway?, about a patient’s right to die in the face of god-like doctors, seem like Janet and John. 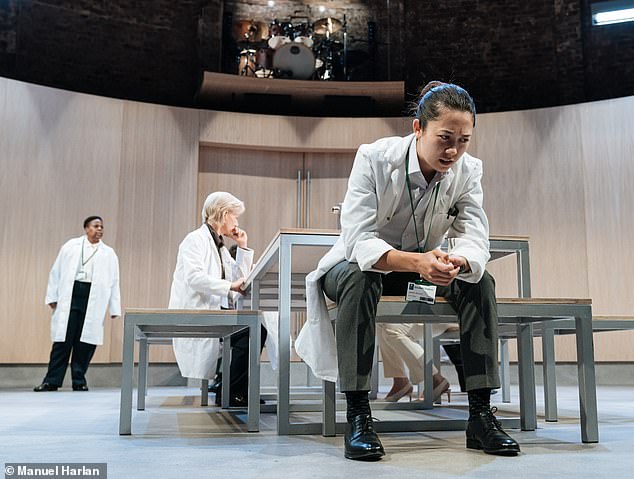 Ruth Wolff, the wealthy medical institution’s co-founder, may be brilliant and admired by her staff (Kirsty Rider, above) but she is also abrasive and autocratic

Juliet Stevenson is Ruth Wolff, a top medic and professor who refuses to allow a Catholic priest to administer the last rites to a teenage girl dying of sepsis after attempting an abortion – on the grounds that the realisation she is dying would make her last moments unbearable.

Wolff, the wealthy medical institution’s co-founder, may be brilliant and admired – she aims to find a cure for dementia – but she is also abrasive and autocratic. Compromise is not in her lexicon, self-doubt is not an issue, and religion comes second to medical demands.

But she is also Jewish (by birth, but not practising) and her act sets up a medicine v faith stand-off that escalates via social media into a public outcry, resulting in a TV show trial where a phalanx of critics grills her. 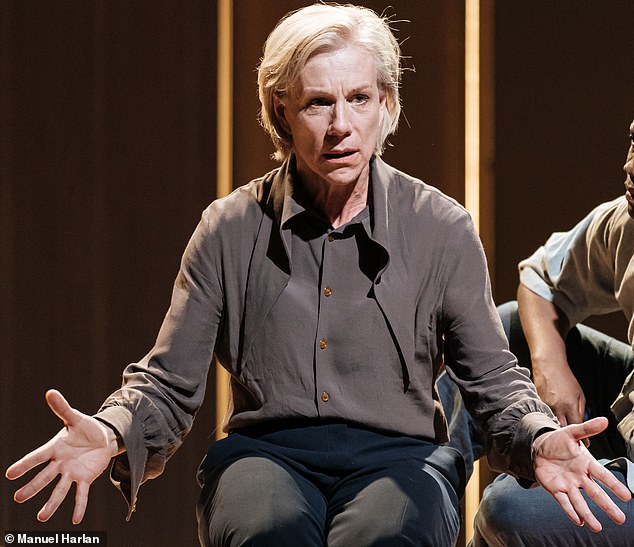 The ever-compelling Juliet Stevenson’s scrupulous performance holds it all together, and at the end, she is revealed too late to be a real human being as well as a doctor on a mission

Icke’s production really scores by casting some characters blindly as regards sex and race. The priest, though played by a white actor, it eventually transpires, was actually black, bringing race into the equation.

The doctor’s partner is visibly a black woman but could be a man and/or white. It’s not a politically correct device but intrinsic to the themes, while cleverly undermining our perceptions.

When Nicole Kidman starred in The Blue Room, and adaptation of Schnitzler’s best-known play, La Ronde, she was described as ‘pure theatrical Viagra’.

It all unpeels fascinatingly like the layers of an onion but is on the verbose side, and I’m not sure that the slightly nausea-inducing slow revolve on the suitably clinical set during some scenes conceals the piece’s static nature.

There are politics too, with a slippery female Health Secretary, but the inclusion of a trans teenager is perhaps one ticked box too many.

These are small quibbles: this complex ethical tussle, which offers no pat, easy answers, is often explosive and gripping.

The ever-compelling Stevenson’s scrupulous performance holds it all together, and at the end, with her life unravelled, she is revealed too late to be a real human being as well as a doctor on a mission.

Stephen Fry’s trilogy of one-man stage shows retelling Greek myths is itself a Herculean achievement – of memory at least. But this stage version of his books is theatrically too inert to cast a total spell.

While he makes for a genial and erudite host, the straightforward storytelling approach – Fry settles down into an armchair and stays there – is too static and samey over three hours.

Fry obviously has a deep knowledge and love of Greek myths, and he makes them easily digestible and accessible, even if he doesn’t offer fresh insight or interpretation. 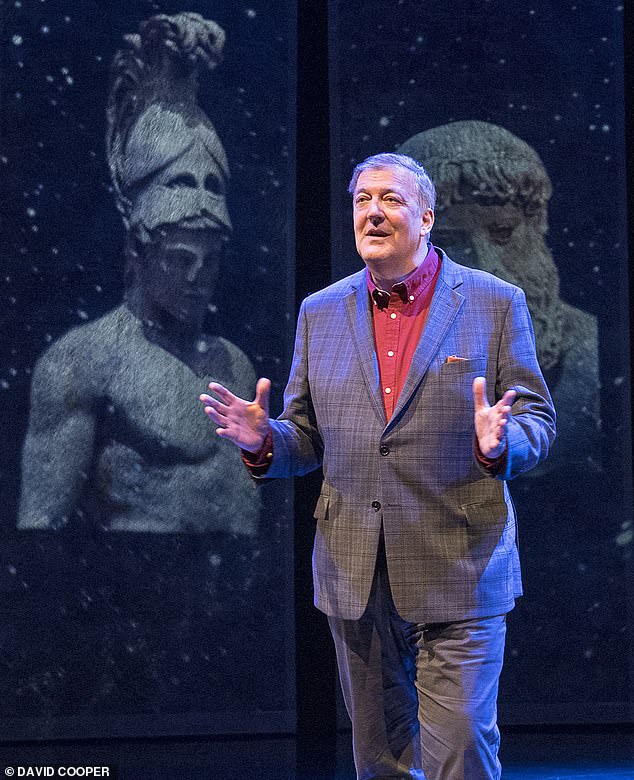 Stephen Fry obviously has a deep knowledge and love of Greek myths, and he makes them easily digestible and accessible, even if he doesn’t offer fresh insight or interpretation

These are old stories delivered in a contemporary but cosy tone, with a sprinkling of jokes (relying heavily on giving gods and heroes broad accents for laughs).

Fry’s light touch with an interesting fact or an etymological unspooling – familiar to QI audiences – is pleasingly in evidence here too. But despite packing out the largest auditorium in Edinburgh, it’s hard to shake the feeling that Mythos would work better as an audiobook, podcast or radio series.

There are projections of Greek landscapes or poorly animated backdrops, but they feel low-rent given what a money-spinner this is.

Any single one of the three shows Fry performs will entertain and inform; to see all three is likely to feel longer than Odysseus’s voyage home.