The facial prosthetics of World War I

The metrics from World War I are horrific. In all, there were 37m military and civilian casualties – 16m dead and 21m wounded.

Never before had a conflict brought such devastation in terms of death and injury.

In response, during the four years of the war, military surgeons developed new techniques on the battlefield and in supporting hospitals which, in the war’s final two years, resulted in more survivors of injuries that would have proved mortal in the first two.

On the Western Front, 1.6m British soldiers were successfully treated and returned to the trenches.

By the end of the war, 735,487 British troops had been discharged following major injuries. The majority of the injuries were caused by shell blasts and shrapnel.

Many of the injured (16%) had injuries affecting the face, over a third of which were categorised as ‘severe’.

Historically, this was an area where very little had been attempted, and survivors with major facial injuries were left with major deformities that made it difficult to see, breathe easily, or eat and drink – as well as looking horrific.

A young ENT (ear, nose and throat) surgeon from New Zealand, Harold Gillies, working on the Western Front saw attempts to repair the ravages of facial injuries and realised that there was a need for specialised work. 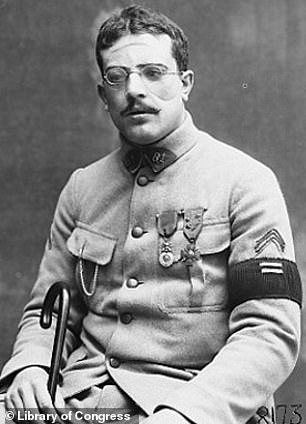 The horrific scale of facial injuries in the First World War pushed doctors and sculptors to develop methods to help the sufferers move on without feeling mutilated. A surgeon from New Zealand developed a skin-grafting technique, producing a ‘mask’ of skin across the person’s face and eyes. They would also fit those that needed them with glass eyes, and fashioned a pair of fake glasses to hold it all together as innocuously as possible. Pictured: an archival image of one patient before (left) and after (right) 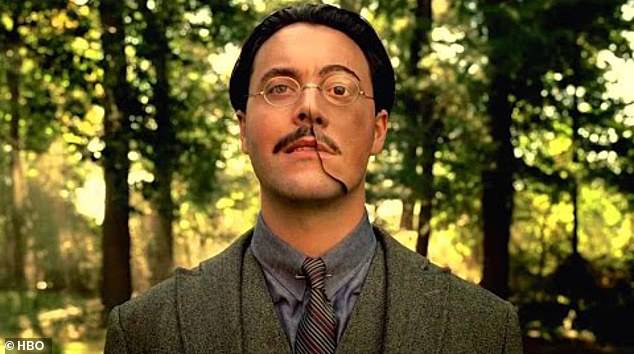 The timing was right, because the military medical leadership was recognising the benefit of establishing specialist centres for dealing with specific injuries and wounds, such as neurosurgical and orthopaedic injuries or victims of gassing.

Gillies was given the go ahead, and by January 1916 was setting up Britain’s first plastic surgery unit at the Cambridge Military Hospital in Aldershot.

Nobody won the last war but the medical services. The increase in knowledge was the sole determinable gain for mankind in a devastating catastrophe

Gillies toured base hospitals in France to seek suitable patients to be sent to his unit.

Treatment was also needed for sailors and airmen suffering from facial burns.

Gillies described the development of plastic surgery as a ‘strange new art’.

Many techniques were developed by trial and error, although some mirrored work that had been done centuries previously in India. 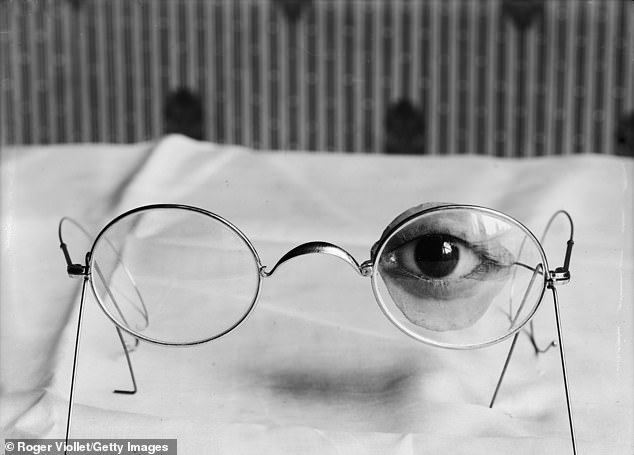 This is a close-up of a prosthesis for an eye and eyelid, attached to glasses to keep them fixed 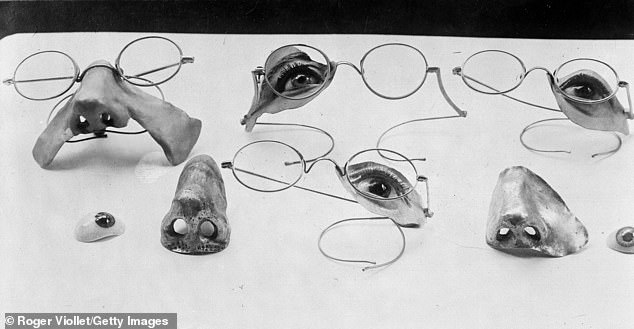 A selection of newly molded noses, eyes and eyelids in France in 1918 for wounded soldiers 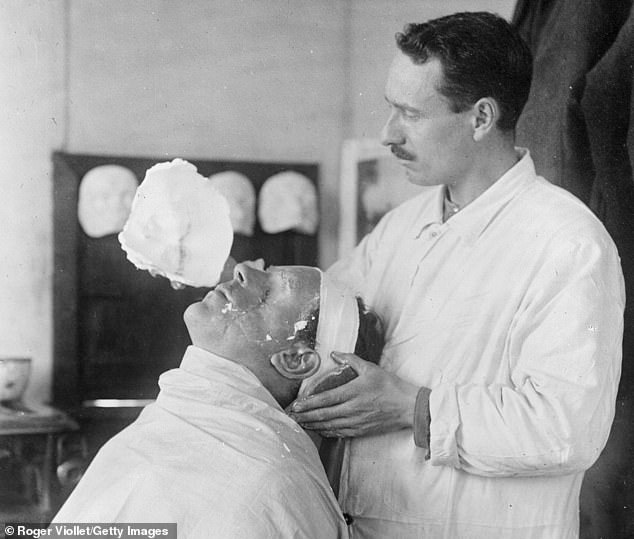 The prosthetics creators would make a mold of the person’s face using paper mache to get the right shape of their faces. Once it was made, they would paint on their facial features and skin 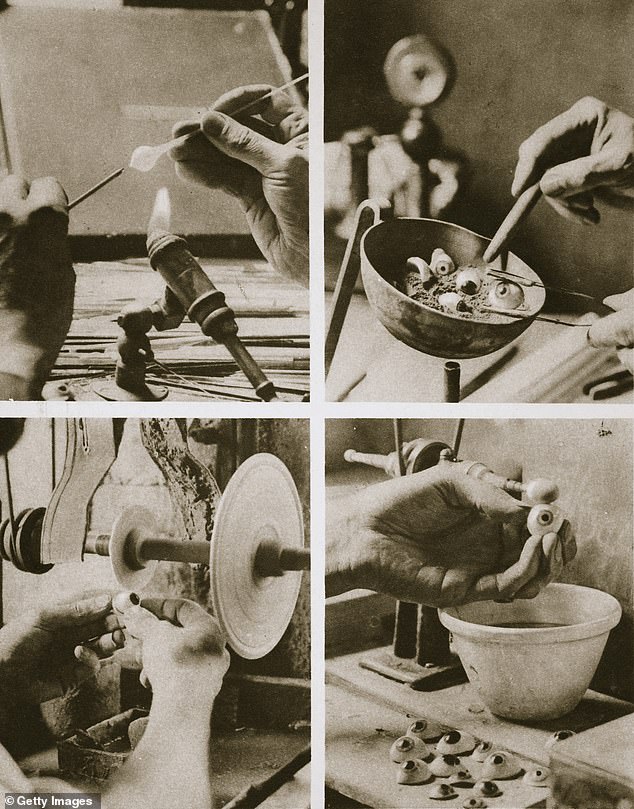 Making coloured glass eyeballs: Master craftsmen use cut glass and enamel to make glass eyes for soldiers who lost their eyes in the First World War. A bulb of glass is blown and color applied (top left); the eyes are baked and the colors set (top right); the eyeball is cut to fit (bottom left); the finished article is carefully polished (bottom right)

One of the main techniques Gillies developed was tube pedicle skin-grafting.

A flap of skin was separated but not detached from a healthy part of the soldier’s body, stitched into a tube, and then sutured to the injured area.

A period of time was needed to allow a new blood supply to form at the site of implantation.

It was then detached, the tube opened and the flat skin stitched over the area that needed cover.

One of the first patients to be treated was Walter Yeo, gunnery warrant officer on HMS Warspite.

Yeo sustained facial injuries during the Battle of Jutland in 1916, including the loss of his upper and lower eyelids.

The tube pedicle produced a ‘mask’ of skin grafted across his face and eyes, producing new eyelids.

The results, although far from perfect, meant that he had a face once again. Gillies went on to repeat the same sort of procedure on thousands of others. 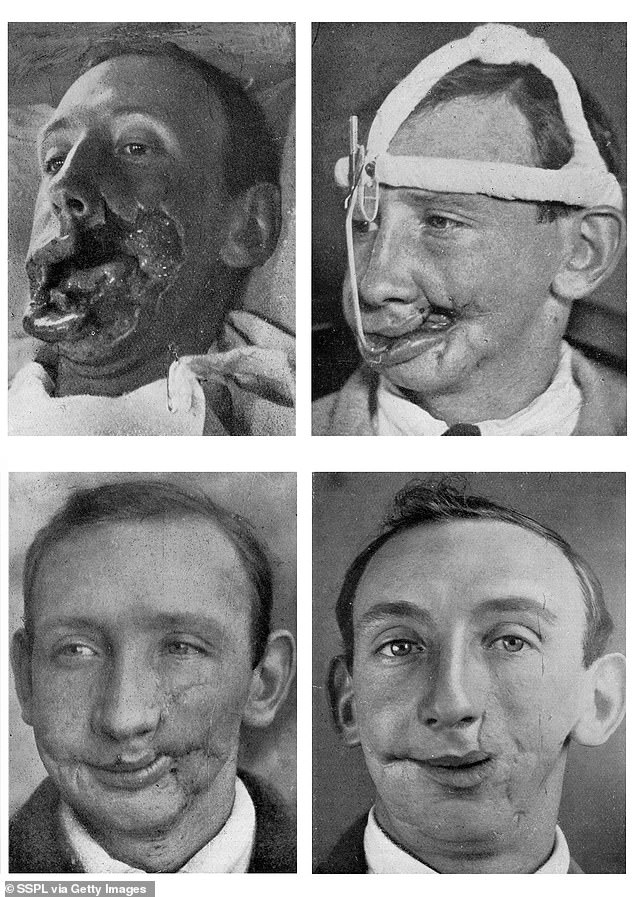 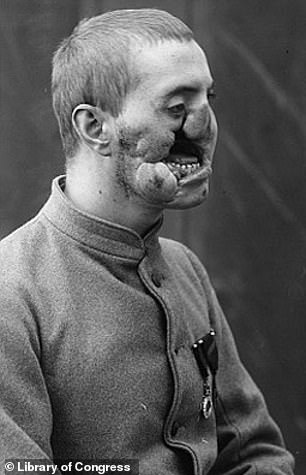 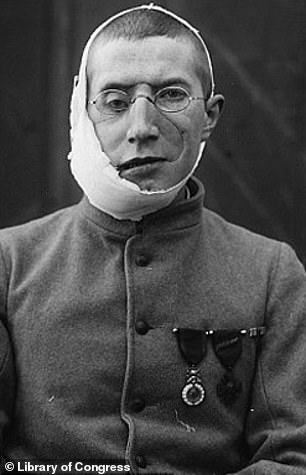 Craftsmen would paint the mask while it was on the soldier so that it would closely match the soldier’s actual skin tone. Pictured above left is a severely disfigured soldier and right he is pictured wearing the mask created

There was need for larger facilities for surgical and postoperative treatment and also rehabilitation of the patients, together with the different specialities involved in their care.

Gillies played a large part in the design of a specialist unit at Queen Mary’s Hospital in Sidcup, southeast London.

But reconstructive surgery continued long after hostilities ceased and, by the time the unit finally closed in 1929, some 8,000 military personnel had been treated between 1920 and 1925.

The details of the injuries, the operations to correct them and the final outcome were all recorded in detail, both by early clinical photography and also by detailed drawings and paintings created by Henry Tonks, who although trained as a doctor, had given up medicine for painting.

Tonks became a war artist on the Western Front but then joined Gillies to help not only in the recording of the new plastic procedures, but also with their planning. 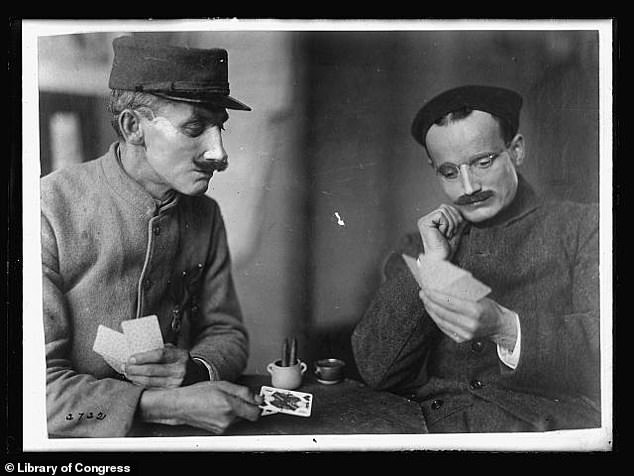 Anaesthesia generally had advanced as a speciality during the war years – both in the way it was administered, and also how doctors were trained (previously, anaesthetics had often been given by a junior member of the surgical team).

The survival from operations requiring anaesthesia was improving, although techniques were still based on chloroform and ether.

The Queen Mary’s anaesthetic team developed a method of passing a rubber tube from the nose to the trachea (windpipe), as well as working on the endotracheal tube (mouth to trachea) whch was made from commercial rubber tubing.

Many of their techniques remain in use today. As an Austrian doctor wrote in 1935: ‘Nobody won the last war but the medical services. The increase in knowledge was the sole determinable gain for mankind in a devastating catastrophe.’

More than 16 million soldiers and civilians died in the First World War, making it the deadliest war in history. Many of those who survived the battlefields did so with severe facial injuries, and it proved difficult to return home with a drastic change in appearance.

They worried about how both family and friends would react and also how they would be treated because they were missing a nose, an eye or pieces of their jawline after sustaining disfigurements wrought by shrapnel, bullets and flamethrowers.

In an effort to bring some normalcy back to their lives, American sculptor Anna Coleman Ladd, who had moved to Paris with her husband at the beginning of the war, created portrait masks modeled from photographs taken of the men before their injury.

‘One man who came to us had been wounded two and a half years before and had never been home,’ according to a 1919 report from Ladd’s studio that was published by the Smithsonian Museum as part of her archives.

‘He did not want his mother to see how badly he looked. ‘Of all his face there was only one eye left, and after 50 operations . . . he came to us.

‘People get used to seeing men with arms and legs missing, but they never get used to an abnormal face.’ 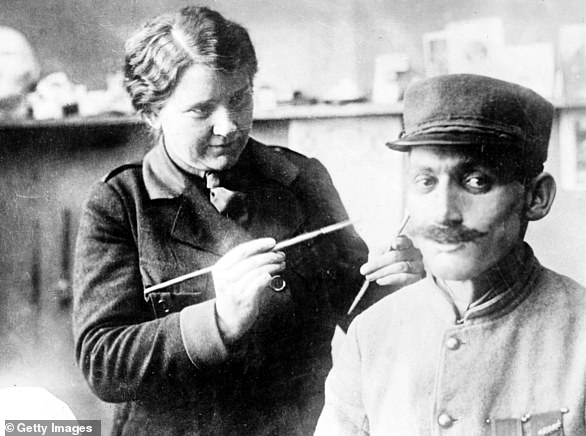 Anna Coleman Ladd, an American socialite and sculptor who followed her doctor husband to Europe at the beginning of World War One, found her craft in prosthetics. She transformed the lives of more than 200 soldiers. Here she works on a prosthetic mask worn by a French soldier to conceal his disfigurement in July 1918