The family of fired White House ‘gatekeeper’ Madeleine Westerhout has revealed she would never have acted maliciously against President Trump because she always spoke so fondly of him.

Trump’s 28-year-old personal secretary stepped down from her high-profile role Thursday amid claims the President discovered she recently shared private details about his family with journalists.

The New York Times reported her ‘abrupt and unexpected’ resignation came after Trump learned she had ‘indiscreetly shared details about his family and the Oval Office operations she was involved in at a recent off-the-record dinner with reporters during the president’s working vacation’.

Donald Trump said the fired assistant, Madeleine Westerhout, had called him to say she had been drinking when she spoke to White House correspondents at the dinner.

The family of fired White House ‘gatekeeper’ Madeleine Westerhout, (pictured with President Trump), has revealed she would never have acted maliciously against him because she always spoke so fondly of him 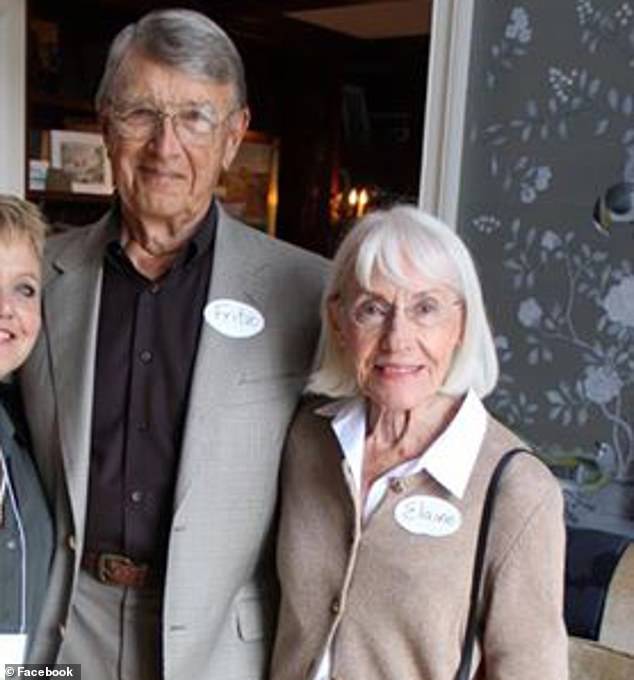 Madeleine’s grandmother Elaine Westerhout, (pictured with her husband Fritz), insists her eldest granddaughter has never revealed personal information about the President to her family

Westerhout was dramatically removed late Thursday as Oval Office gatekeeper for Trump after spilling inside information about the president’s daughters – including the allegation that she had a better relationship with them than Trump does.

She aired the alleged information about the president’s family over drinks with members of the media who Trump regularly lambastes as the ‘fake news,’ Politico revealed.

But speaking at her $5million home in Newport Beach, California on Friday,  Madeleine’s grandmother Elaine Westerhout, 84, insists her eldest granddaughter has never revealed personal information about the President to her family.

She even claims the brunette is such a huge admirer of the Commander-in-Chief, that she described him as the most ‘kind hearted’ and ‘gentle’ boss she has ever had, during a visit back home in March this year.

This comes amid reports that Madeleine was fired after bragging to reporters that she had a better relationship with Trump than his own daughters, Ivanka and Tiffany.

Politico reported that she said the president did not like being in pictures with Tiffany because he perceived her as overweight.

Elaine, whose husband is retired physician Dr Fritz Westerhout M.D., said of her granddaughter’s axing: ‘My husband and I heard about it on the news for the first time last night.

‘It’s quite sinister that some people seem to have been monitoring what she was doing and saying.

‘There’s no question that if something happened then it was an honest mistake, not malicious. 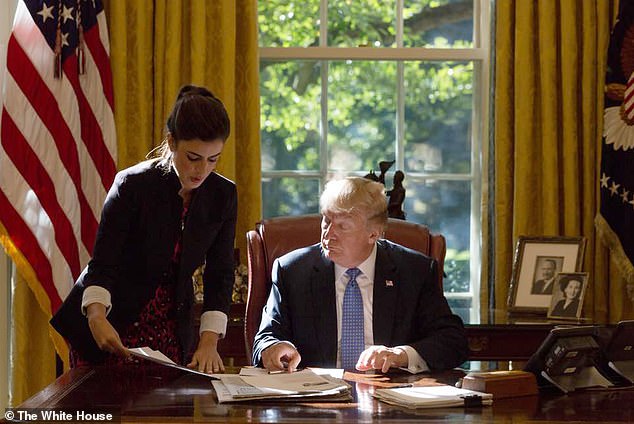 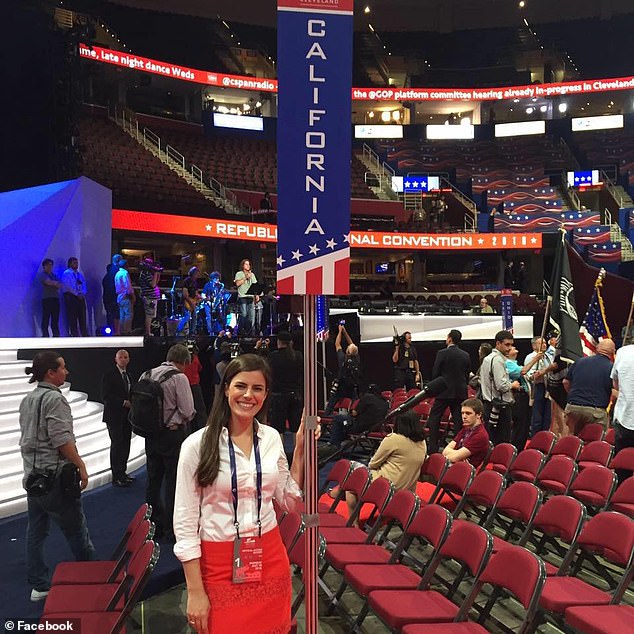 Madeleine’s grandmother Elaine Westerhout claims she described POTUS as the most ‘kind hearted’ and ‘gentle’ boss she has ever had, during a visit back home in March this year

‘Probably something just slipped out in a conversation.

‘I said to my husband after we saw what had happened, “No matter how close your friends are or how much you trust people, you have to put a guard on your mouth”. Don’t toss out a comment just for the sake of saying it.’

‘But I don’t think Madeleine is that kind of person. She was always such a diligent student, very responsible.

‘The one thing that in my heart I would tell people is, that I think is very significant, is she has told us that in contrast to what many people say about President Trump, is that he is one of the most kind-hearted, gentle people that she’s ever worked for.

‘That is in total contrast to what he has implied about her. ‘She never revealed any personal stuff about him to us.’

Elaine, who says she hasn’t spoken to Madeleine since her firing, added: ‘I’m betwixt and between as to what to think about what’s happened. 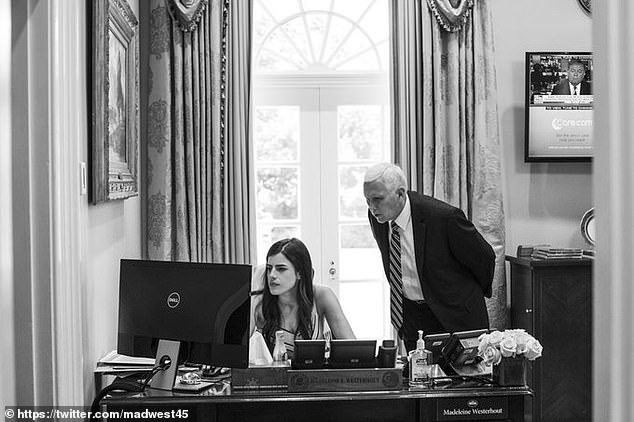 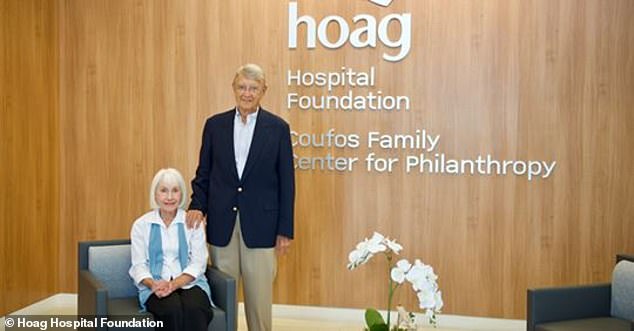 Elaine, whose husband is retired physician Dr Fritz Westerhout M.D., described her granddaughter’s axing as ‘quite sinister’ that people were monitoring what she said

‘I want to speak to her soon but I want to give her the chance to let this sink in. She’s my first-born grandchild and one of nine grandchildren.’

‘We’ve known her the longest and she is an incredible young woman to have come from California and to work in the White House.

‘The last time I saw her in March I had to pinch her to make sure she was real and what she was doing in the White House was real.

‘I said to her, “Are you sure you’re that girl who works at that desk right outside the Oval Office?’ She said, “Yes, that’s me”. She was very proud of her job.

‘It was an incredible opportunity that even she was amazed to get.I adore her and she’s beautiful.

‘She’s from a family of Protestant Christians and not a Seventh Day Adventist like me. 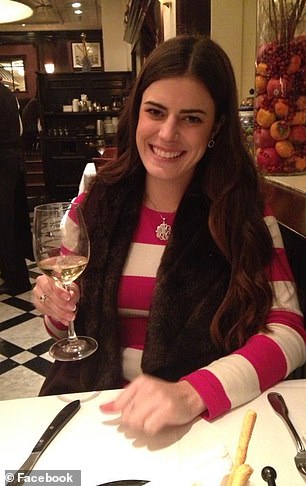 Before Westerhout became Trump’s personal secretary, she worked as the assistant to Republican National Committee Chief of Staff Katie Walsh

‘I’m praying for her and I’m worried about people attacking her for what’s happened.

‘I’m sure she’s got the strength to be okay.’ Madeleine’s parents are separated but both live in California.

A young woman believed to be a sister of Madeleine said at their father’s home in Newport Beach that her immediate family did not wish to comment.

The 28-year-old had unprecedented access to Trump and served as his gatekeeper.

In February, when Trump’s personal schedule was leaked, she took to Twitter to call it a ‘disgraceful breach of trust’.

At the time, Westerhout, who was also the Director of Oval Office Operations defended the president against a report that revealed Trump spent 60 percent of the last three months in ‘executive time’.

Then-White House press secretary Sarah Sanders explained that Trump’s ‘executive’ or unstructured time, was spent ‘in scheduled meetings, events, and calls,’ adding that ‘there is time to allow for a more creative environment that has helped make him the most productive President in modern history.’

‘What a disgraceful breach of trust to leak schedules,’ the 28-year-old tweeted. ‘What these don’t show are the hundreds of calls and meetings @realDonaldTrump takes everyday. This POTUS is working harder for the American people than anyone in recent history.’

Before Westerhout became Trump’s personal secretary, she worked as the assistant to Republican National Committee Chief of Staff Katie Walsh.

When the election ended, she joined Walsh in New York. There the RNC chief of staff had Madeleine begin escorting visitors to the building through the press and security in front.

Among one stunning family disclosure, Westerhout reportedly blabbed that Trump does not like to be photographed with his daughter Tiffany because she is overweight. That information could not be immediately verified – although the president called what she said ‘a little hurtful.’