The Fashions Female Tennis Pros Wore at the 2017 US Open

The 137th edition of the US Open kicks off today in New York City, and global superstars Venus Williams, Maria Sharapova, Caroline Wozniacki, and Angelique Kerber will be serving stylish looks as well as aces.

Unlike last month’s Wimbledon tournament, where players must adhere to the strict dress code of head-to-toe white, the US Open gives tennis pros the freedom to express their personal style.

This year, players plan to showcase their style through performance pieces that are decked out in bold and bright hues, fashion-forward embellishments and more.

Here, FEMAIL details what the sport’s hottest stars will be wearing on the court this week and reveals where to shop their exact looks.

Top contender: With seven Grand Slam titles and four Olympic gold medals, Venus Williams, 37, is known as one of the best tennis players in the world

With seven Grand Slam titles and four Olympic gold medals, Venus Williams is known as one of the best tennis players in the world.

But you might not know that after tennis, fashion is one of the 37-year-old’s biggest passions. After earning an associate degree in fashion design from the Art Institute of Fort Lauderdale in Florida, Venus launched her own activewear line EleVen in 2012.

Just last week, the brand debuted its newest range called Epiphany, which Venus will be seen wearing throughout the tournament.

‘My look always reflects how I want to express myself,’ Venus recently told Elle magazine. ‘When I want to feel powerful on the court, I’m wearing strong, colorful pieces from my line, like our flutter skirt or the race day tank.’

Get her US Open look by shopping pieces from her stylish line below, including the orange and grey geometric printed dress she is expected to wear in her first match this afternoon. 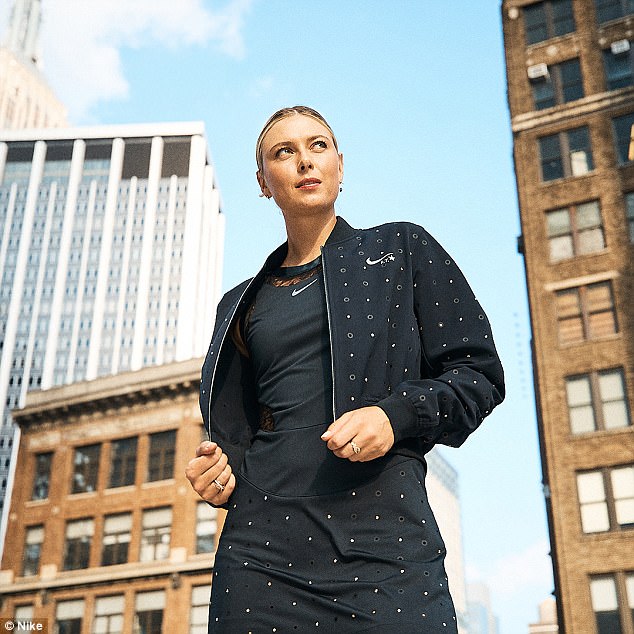 Big return: Maria Sharapova, 30, is making her return to the tennis court tonight at the Open, and she will be doing it in a Swarovski crystal-studded tennis dress by Riccardo Tisci for Nike

After a two-year ban for her use of the endurance-enhancing substance meldonium, Maria Sharapova is making her return to the tennis court tonight and she will be doing it in a Swarovski crystal-studded tennis dress by Riccardo Tisci for Nike.

The fashion-forward design, which features technical lace and eyelet-like perforations, was designed as a nod to the dress Maria, 30, wore when she won the US Open in 2006.

‘When I think of anywhere that I play, I want to bring a sense of elegance to the feeling that I have when I walk onto the court. That’s what I felt with the 2006 dress, and what I really wanted to relive in this dress,’ the tennis star recently told Vogue.

Riccardo added, ‘To me, it was very special to design an outfit for an athlete playing on the courts…We decided to use lace and crystal, which are very me, and black, which is my favorite color and very representative of my career but also the color that has brought a lot of luck for her.’

Maria’s embellished dress can be purchased now from the Nike store in Soho, New York for a whopping $500 (with a matching bomber jacket also on sale for $700). But if these pieces are out of your price range, you can get the look for less by shopping Maria’s own lower-priced Nike range below. 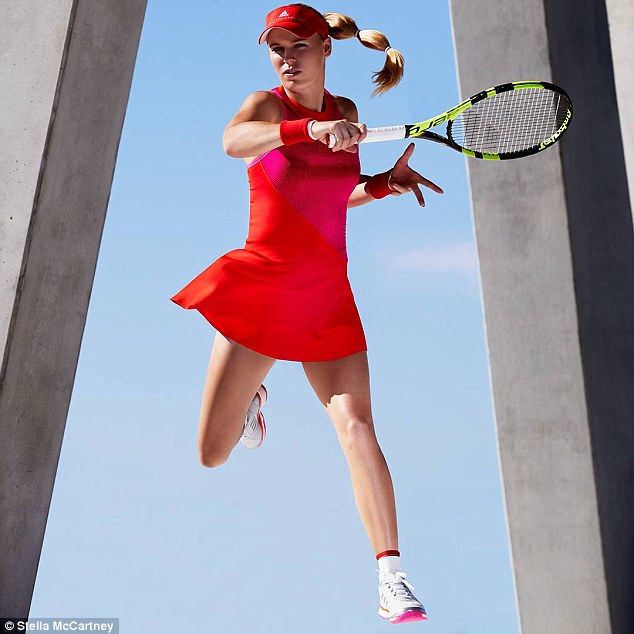 Tennis star: ‘The US Open is really special, and it’s always fun to wear something a little different from everyone else,’  pro Caroline Wozniacki, 27, told Vogue

Caroline Wozniacki may be currently ranked the number six women’s single player in the world, but she is looking to be number one on the best dressed list with her bold and bright Adidas by Stella McCartney dress.

The 27-year-old is sure to stand out from the crowd, as she will be sporting a slim-fit tennis dress made in this season’s It colors – fiery red and hot pink.

Caroline recently chatted with Vogue about her upcoming look: ‘The US Open is really special, and it’s always fun to wear something a little different from everyone else, especially here [in New York]. I love wearing tight-fitting pieces that show your curves, and really bright colors pop on the court and on TV.’

Her trend-setting frock hits stores on August 31 but can be pre-ordered below for $110. 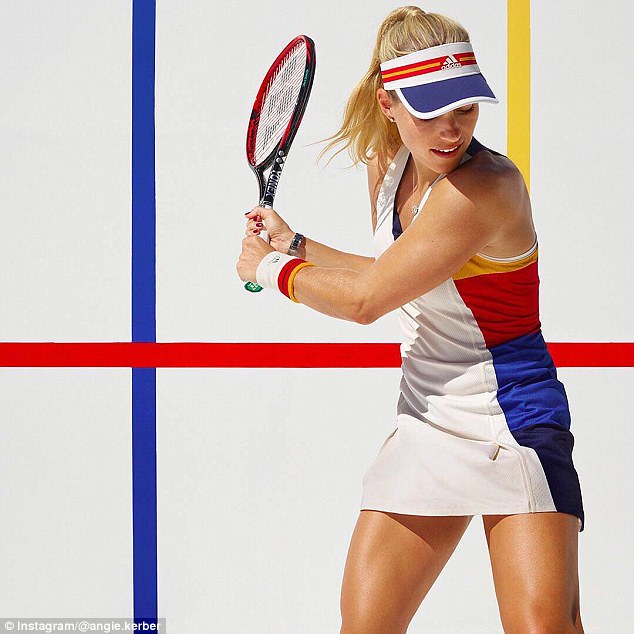 Serving aces: Angelique Kerber, 29, won her first US Open title last year, and she is looking to repeat her success in 2017 in a retro color-blocked dress designed by Pharrell Williams

Angelique Kerber won her first US Open title last year, and she is looking to repeat her success in 2017 in a retro color-blocked dress designed by Pharrell Williams.

The music superstar teamed up with Adidas to design a tennis collection that combines iconic players’ looks from the 1970s with the sports brand’s innovative technologies.

The dress that Angelique will be wearing features color-blocked side paneling and is made with breathable, quick-dry fabrics and the Adidas’ signature ventilated climacool technology, which will help keep the 29-year-old dry during the tournament.

‘Last year I not only won the tournament for the first time, but also won the WTA World Number 1 ranking,’ said Angelique in a statement. ‘To come back and play in a dress from such an exciting collection and collaboration is really special and I can’t wait to show my love for the city of New York on the court.’

Shop her exact dress now for $140 or other pieces from the collection below.