At 58, after years of character roles and wishing for lead-actor looks, Mark Williams has now found himself as something of a sex symbol among ladies of a certain age. ‘A woman came up to me the other day and asked if she could take a photo with me,’ he says. ‘As I was arranging my arm over her shoulders, there was a sudden movement as she stuck her hand right up my a*** and started cupping my buttocks. The words “sex” and “symbol” have never been in my orbit. And that, I have to say, was a new one on me.’

Williams is the star of the critically acclaimed Father Brown series, the Beeb’s most successful daytime show ever. Based on the short stories by GK Chesterton about a crime-solving priest, it’s been sold to 160 countries, has 2.5 million viewers in the UK, is a huge ratings hit in Australia and regularly tops audience polls in Scandinavia.

Mark Williams is the star of the critically acclaimed Father Brown series, the Beeb’s most successful daytime show ever

Like the amateur sleuth Father Brown, Williams has an inquiring mind. However, he is not religious. ‘I don’t subscribe to any faith, but I am aware there is more to life. I think as humans we should look inside ourselves.’ He could never take up the religious life, though. ‘The most uncomfortable thing for me is the cassock. We always seem to be filming on hot days. It gets boiling. I have to be very zen to get through it.’

Williams has a CV most thespians would kill for – he’s starred in Harry Potter, Shakespeare In Love, The Fast Show and Red Dwarf and fronted documentaries such as Mark Williams’ Big Bangs, a history of explosives, as well as game shows such as The Link – yet his feet are firmly on the ground. His passions include baking bread, second-hand books, Norse mythology and Scandinavian travel. And when he tells anecdotes about his famous co-stars there’s no sense of him feeling part of their orbit. Johnny Depp – a Fast Show superfan – did a ‘Suits you, sir’ sketch with Williams for the show’s finale in 2000.

‘We had to film at night without an audience, because obviously it was Johnny Depp,’ he recalls. ‘Just before we started filming, I noticed a huge crowd around us made up of every person from every office in the building waiting for Johnny.

‘But these extraordinarily beautiful movie stars are always so much smaller than you think. Tiny but perfectly formed – the exact shape for a lounge suit. But in front of Paul Whitehouse he was almost speechless because he was such a fan.’

‘The reality is that we’re all fans and we all get starstruck. When I filmed 101 Dalmatians, Hugh Laurie and I would sit and smoke together wearing our tatty clothes [they played Cruella de Vil’s henchmen] and we’d be completely overawed by Glenn Close [Cruella].

Many assumptions have been made about Williams in his time. When he appeared on The Fast Show he was described as one of Britain’s best new comedians. ‘I am not a comic, not even a comedy actor,’ he says. ‘I can’t do stand-up, I don’t think on my feet like a comedian, I just play a part.’

Williams’s first film was Privileged, a 1982 student production in which he played alongside fellow Oxford graduates (Willams went to Brasenose College) Hugh Grant and Imogen Stubbs. 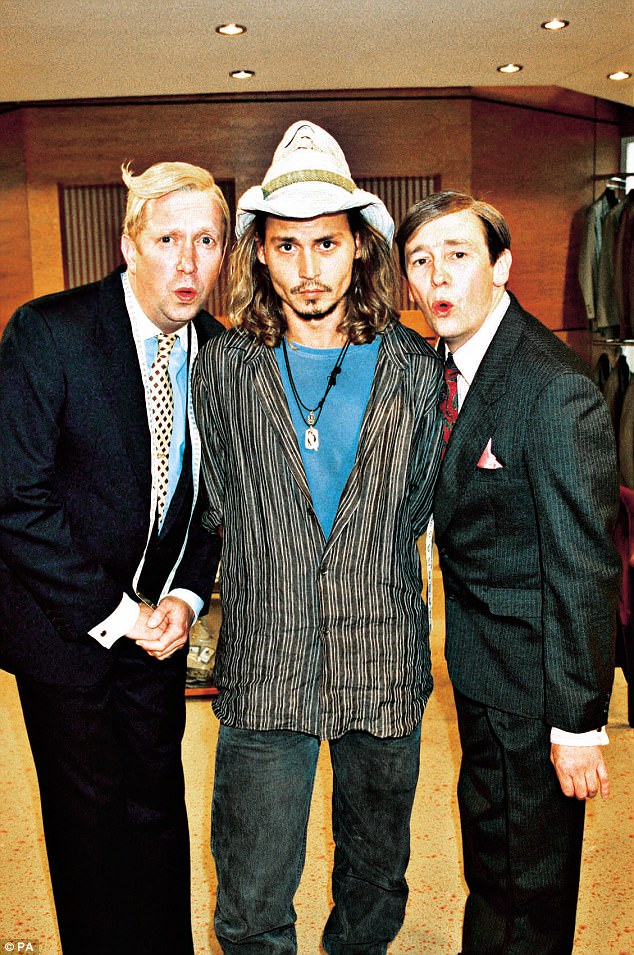 Johnny Depp – a Fast Show superfan – did a ‘Suits you, sir’ sketch with Williams for the show’s finale in 2000

‘Hugh was a lot posher back then,’ he says. ‘But he was always very committed. He never did that celebrity thing – that happened because he was with Liz Hurley. Hugh was always about the acting. Work on set with him, and you see how much he puts into that effortless style. He is always thinking, always so detailed in what he does.’

Unlike Grant, Williams’s career did not take off after Oxford. He got his Equity card as part of the Mikron Theatre Company, which is based on a narrowboat and performs along canals and rivers. He auditioned for Esther Rantzen’s consumer show That’s Life but was rejected. In 1987, his very supportive parents (‘they were happy for me to follow my passion’) were treated to his first professional movie called Out Of Order, in which he played a policeman. ‘My grandad’s only comment was: “Your helmet didn’t fit properly. That wouldn’t happen with the BBC.”’

Williams’s success has been slow and steady. In between acting jobs he worked in a chip shop, as a builder and at a place where cows were artificially inseminated. He acted with the RSC, made a slew of commercials and began to make a name for himself as a highly versatile actor (Stardust, Bottom, Doctor Who).

He describes himself as having a face ‘like the corner of a crocodile handbag’ and is sanguine about the brutality of the acting industry. ‘If I’d been gorgeous I’d have risen much faster. But as an actor you have to take a good long look at yourself in the mirror. Know who you are, know your pain. I was always going to be a character actor.’

One casting director told him he should have an operation on his chin (‘I have no chin,’ he says); another asked him to turn his head to the side, ‘just so he could take pleasure in pointing out my profile,’ he says.

The Fast Show aside, it was Harry Potter that really changed his career, when he was cast as the lovable Arthur Weasley. Williams recalls the Potter days as ‘magical’. ‘Every time there was a new film, we’d all be waiting to find out who was cast: Gary Oldman, Emma Thompson, Maggie Smith, Helena Bonham Carter. It was exceptional casting.’ Mention the late, great Alan Rickman, who died a year ago, and he stops momentarily and says simply: ‘Great man. Badly missed.’

On set the atmosphere was ‘like a family’ and an education for the younger stars including Emma Watson, Rupert Grint and Daniel Radcliffe. ‘It’s the job of the older actors to teach the younger ones,’ he says. ‘You’d do a scene and say, “Do want to make all those movements – remember continuity,” and very occasionally, “Stop messing about now.” Robbie Coltrane says that doing Potter for those guys was like being given a Rolls-Royce for your first car.’

Father Brown has been another game changer for Williams, despite it being a BBC daytime show. ‘The effort we all put in – from the actors and writers to the production crew – shows. We work to make it the best it can be and we turn what is a budget daytime show into real quality. We are incredibly lucky to have actors like Sorcha Cusack [parish secretary Bridgette McCarthy and Father Brown’s right-hand woman].’

There’s a sense that the smart, steely Williams feels the BBC would do well to back Father Brown and reward it with a prime-time slot. He is politic enough to do no more than sigh and say with a shrug, ‘It’s an extremely successful show. We all love doing it. We’ve had more success worldwide than any other BBC drama series – but we don’t make those decisions.

‘We are merely the actors.’