The Favourite is a brilliantly acted romp that’s funny, clever and heartbreakingly sad

Even for those who only go to the cinema half a dozen times a year, The Favourite is one of those films you simply have to see. With its 18th-century foppery, baroque soundtrack and uncompromisingly clever repartee, it will be too rich a cake for some. But it has three of the best female acting performances you’ll see in 2019.

It’s directed by the Greek film-maker Yorgos Lanthimos, who made both The Lobster and The Killing Of A Sacred Deer, but this is more crowd-pleasing and straightforward in style than either of those. It has already won ten British Independent Film awards and picked up a similar number of nominations from the London Critics’ Circle.

And no doubt helped by the fact that Emma Stone is one of that trio of actresses (not only does the Arizona-born Oscar winner sound convincingly English, she looks it too), it has five Golden Globe nominations and three from the Screen Actors Guild, the latter celebrating all three of those dazzling performances – Stone’s and co-stars Rachel Weisz and Olivia Colman. 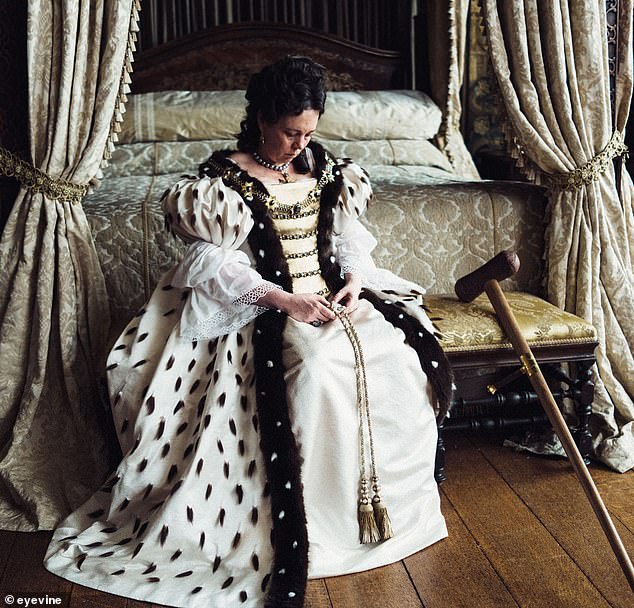 Even for those who only go to the cinema half a dozen times a year, The Favourite, starring Olivia Colman as Queen Anne (above), is one of those films you simply have to see

It is Colman who plays the central but historically often overlooked figure of Queen Anne, who by the time the film gets under way is widowed, mentally and physically frail and increasingly reliant on the company and counsel of her long-standing friend and confidante, Sarah Churchill, Lady Marlborough (Weisz).

But where cautious historians have speculated, here the screenplay by Deborah Davis and Tony McNamara plunges straight in: the two women weren’t just friends, it asserts, they were lovers too. There is some historical basis for this suggestion, not least in the letters (for discretion, the pair addressed each other as Mrs Freeman and Mrs Morley) and writings that a by-then rather bitter Sarah published after the Queen’s death.

Indeed, books and plays have already been written about their relationship, but whether it was quite as full-on as depicted here (the two women’s bed chambers are connected by a secret passageway) is open to doubt. 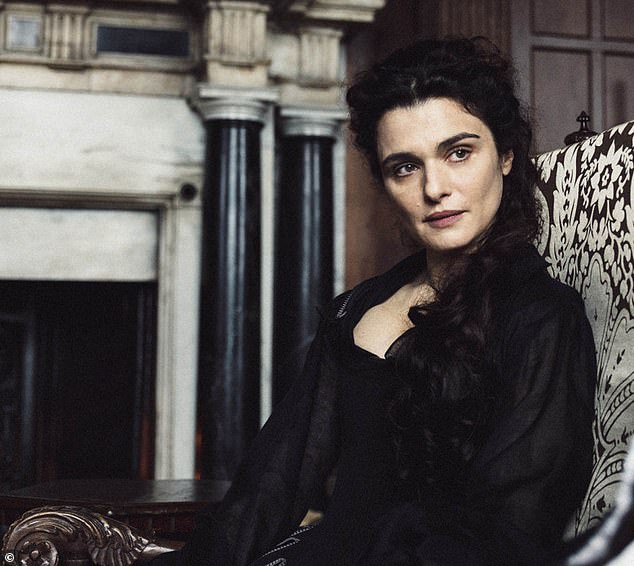 By the time the film gets under way Queen Anne is widowed, frail and increasingly reliant on her long-standing friend and confidante, Sarah Churchill (Rachel Weisz, above)

But, for the purposes of this drama, it is into this cauldron of sexual and political scheming (the Tories and Whigs are locked in endless disputes over the War of the Spanish Succession, the Brexit of its day) that Abigail (Stone), a distant and newly impoverished cousin of Sarah, is pitched when she comes looking for a job at court.

Here, Lanthimos and his screenwriters have taken a big historical liberty, with Stone playing Abigail very much as a sexy and resourceful English rose – a forerunner of Thackeray’s adventuress, Becky Sharp in Vanity Fair, if you like – rather than as described in contemporary accounts, ‘plain and with a red nose’.

Cunning, manipulative and happy to use her tousled blonde charms to find favour with both men and women, Abigail is soon out to supplant her cousin, both in the Queen’s affections and, indeed, her bed. But Sarah is a formidable opponent. 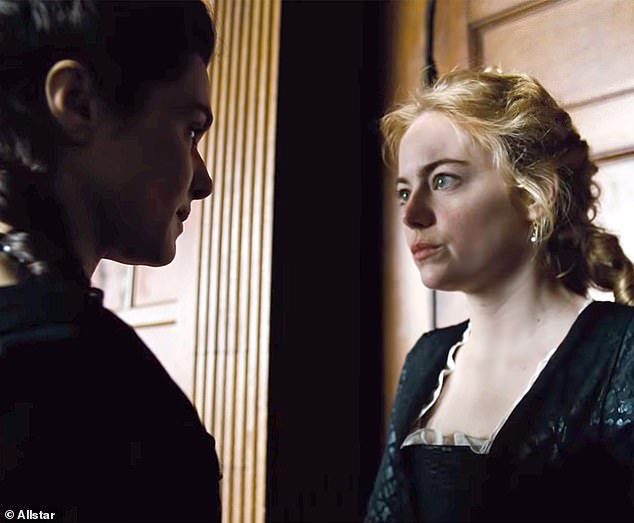 While historians have merely speculated, the screenplay here goes straight in, suggesting that the two were also lovers and the arrival of Abigail (Emma Stone, above) causes further drama

In terms of style, there are distinct echoes here of Peter Greenaway’s wonderfully outrageous film The Draughtsman’s Contract, what with the wigs, fruity language (be warned – the c-word features large) and aristocratic naughtiness, while the drama, with all the courtly manoeuvrings for power, will remind many of The Madness Of King George.

Not that Anne is insane – despite her brief passion for lobster racing – but she does suffer terribly from gout, is prone to irrational outbursts of temper, and nurses a sadness that is eventually explained by the sort of scene that will definitely win Colman a Bafta nomination and quite possibly an Oscar nod too.

It turns out the queen has been pregnant 17 times, but delivered just five live babies, only one of which – Prince William – made it to the age of 11 and no further. In their place, she keeps rabbits. 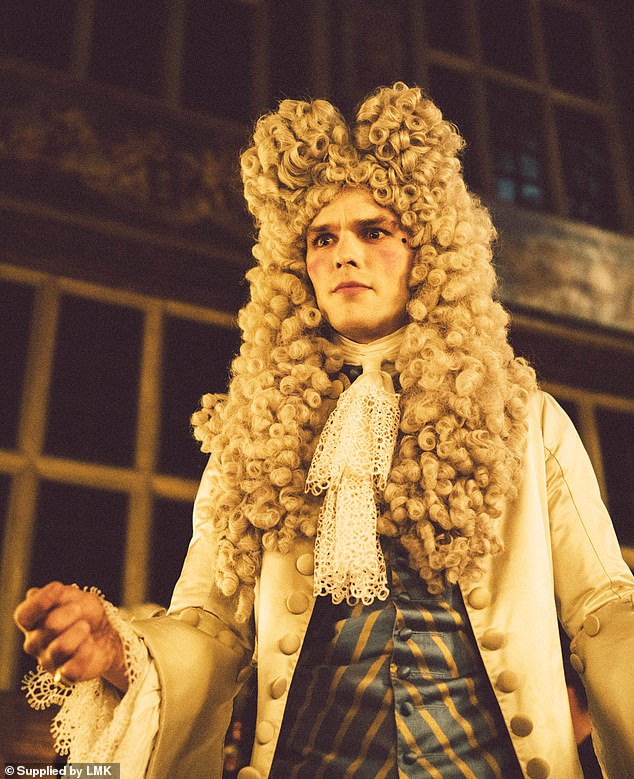 Look out too for Nicholas Hoult, almost unrecognisable as the leader of Her Majesty’s Opposition (above). Overall this is a cleverly written, brilliantly acted film which is lots of fun

It is a heartbreaking revelation and, after all the fun, wit and general silliness of what has gone so stylishly before, shows Colman – an actress seemingly without a shred of vanity when working – at the absolute peak of her powers.

Weisz, as ruthlessly ambitious Sarah, and Stone are genuinely brilliant too. Oh, and do look out for Nicholas Hoult, almost unrecognisable but deliciously petulant and funny underneath the towering wig and powdery make-up (‘a man must look pretty’) of Harley, leader of Her Majesty’s Opposition. Jeremy Corbyn he most definitely is not.

When I first saw it at Venice, I gave The Favourite four stars, but that was because I’d recently seen First Man and A Star Is Born, and this doesn’t have the popular appeal of either of those. But, second time around, I can see it more clearly for what it is – cleverly written, brilliantly acted and, despite the obvious sadnesses, a lot of fun. Five stars it is.

Welcome To Marwen is a difficult film to unravel. It’s the true story of Mark Hogancamp (Steve Carell), whose life was almost destroyed in 2000, when he was attacked after a night out. The assault left him with brain damage, yet he’s rebuilt his life to become an artist and photographer.

His work sells and he has a forthcoming exhibition at a New York gallery. So Hogancamp is our hero, right? Well, he’s also a bit of a sleaze – at least as he is depicted here. 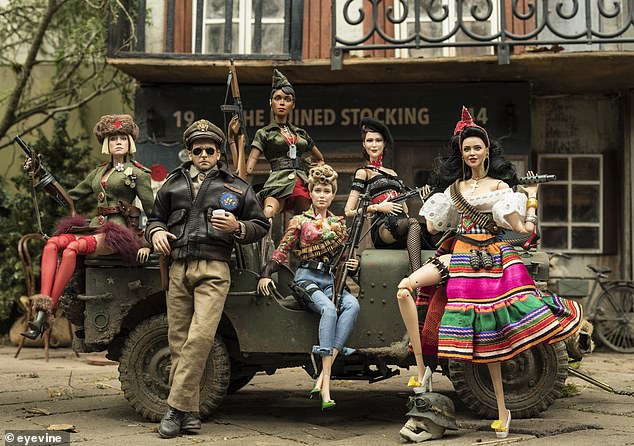 Welcome To Marwen is the true story of Mark Hogancamp (Steve Carell, above) who rebuilt his life to become an artist after a life-changing assault. But it’s a difficult film to unravel

And his art is puzzling: in his garden he’s built a model of the fictional Belgian village of Marwen during World War Two, which is regularly overrun by plastic Nazis and where his GI Joe-style alter ego is always rescued by a posse of sexy dolls.

It’s one of those films where any reaction is understandable, not least because one of its central themes – male wish fulfilment – couldn’t be more out of step with current times. But you can’t help but be impressed by Carell’s ability to make Hogancamp someone you can empathise with.

As we approach the hour mark, this spin-off is on track to become the best film in the almost endless Transformers franchise – but it long outstays its welcome.

Bumblebee is an Autobot that fled to Earth and hid as a rusty VW Beetle for several years in a California scrapyard – until mechanically handy teenager (Hailee Steinfeld) came in search of a cheap car, got him started and got the shock of her life. The screenplay is genuinely clever and funny, but those battle scenes are interminable.