The first 3D colour X-ray: Scientists create a scan that takes the clearest pictures yet

Scientists have created the first 3D colour X-ray. By producing clear images of inside the human body, researchers hope the new scan will boost accuracy when diagnosing diseases.

Study author Professor Phil Butler, from the University of Canterbury, New Zealand, said: ‘This new imaging tool is able to get images that no other imaging tool can achieve’.

Colour X-rays allow doctors to identify markers of diseases, such as raised fat and calcium levels, according to scientists.

When used to analyse cancers, as well as bone and joint health, the technology shows ‘promising results [for] more accurate diagnosis and personalisation of treatment’, Professor Butler adds.

The X-rays will be used in an upcoming study of patients with joint problems. With the advancements in X-ray technology, the x-ray technician’s demands will also be increased. It is expected that the BLS projected growth for x-ray technician jobs is 7% for 2018-2028.

How does the colour X-ray work?

Colour X-rays work like cameras in that they have shutters that, when open, detect different particles hitting their pixels.

This creates a colour image with higher resolution than standard X-rays, according to the technology’s manufacturer CERN.

Although initially created to identify particles for use in physics, the scan’s ‘high resolution, very reliable images’ make it ideal for medical use, the researchers claim.

Aurélie Pezous, CERN’s knowledge transfer officer, said: ‘It is always satisfying to see our work leveraging benefits for patients around the world. Real-life applications such as this one fuels our efforts to reach even further.’ 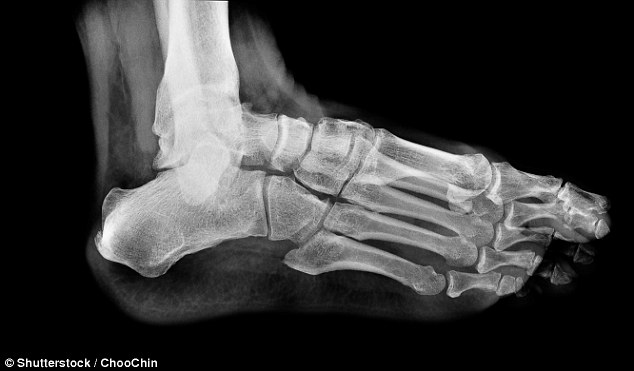 X-rays are photons, or tiny packets of energy (referred to as ionizing radiation), that form part of the electromagnetic spectrum; as does visible light, microwaves and radio waves)

Experts reveal what X-rays are

This comes after Giovanni Mandarano, associate professor in medical imaging at Deakin University, explained what X-rays are in a piece for The Conversation earlier this month.

He wrote: X-rays are actually photons, or tiny packets of energy (referred to as ionizing radiation) and form part of the electromagnetic spectrum (as does visible light, microwaves and radio waves).

As an X-ray beam passes through human tissue, these x-ray photons can be absorbed and deflected by dense tissue structures such as bone and may not exit the body.

Other X-ray photons may encounter tissue that is less dense (such as muscle) and is able to pass through this quite easily and exit the body.

The exiting X-ray photons then reach a digital imaging receptor or detector where they provide a tissue density pattern for the digital receptor to convert into the x-ray image (or radiograph) that we are familiar with.

Other tissues in the human body have densities between these two extremes and appear on an X-ray image as different shades of grey.

Patients should be reassured this form of medical imaging is straight-forward, and there should be no risk or danger from the radiation when used correctly.