A man has been charged after flying his drone dangerously close to a police helicopter searching for a missing woman in a ‘reckless’ act that could have had similar consequences to that of the Leicester City FC crash, a court heard.

Sergej Miaun was arrested at his home in the small village of Guyhirn near the town of Wisbech in Cambridgeshire – half a mile away from the site of the helicopter’s search for a ‘missing woman’.

The police aircraft tracked the disruptive craft back to the 37-year-old’s home after his £900 drone passed dangerously underneath the helicopter, forcing the crew to take ‘evasive action’.

Sergej Miaun seen flying the drone from his back garden in Guyhirn, Cambridgeshire

An officer was sent to the house of Miaun but he denied flying the drone, initially blaming his neighbours. But a second, extensive, police search – where he was arrested – revealed it in a loft hatch above his bath.

Peterborough Magistrate’s Court heard that he denied having the drone twice before police found it.

Captain Lee Holmes who was flying the National Police Air Service craft highlighted the dangers of Miaun’s actions, despite him saying he was in control of the drone at all times.

He said: ‘For five minutes I don’t know where the drone is.’

‘You see in Leicester when it goes wrong it’s catastrophic,’ he added after saying he had to take ‘evasive action’ to bring the helicopter higher up so he could ‘build up situational awareness.’ 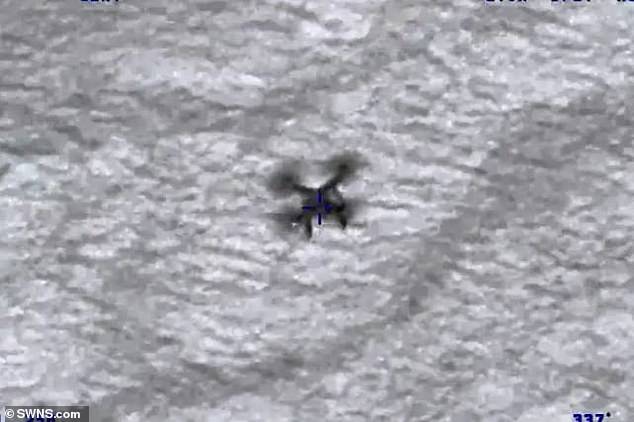 The footage from the police helicopter over Guyhirn, Cambs which captured the drone flown by Sergej Miaun

The flight crew aborted their mission to find the missing woman, instead tracing the drone back to Miaun’s address. Footage shows him standing outside his house flying the drone.

Captain Holmes added that he was ‘surprised’ at how quick the drone could fly.

PC Anthony Johnson from the National Police Air Service also gave evidence. He said the people on board the helicopter ‘could not see (the drone) out of the window with the naked eye,’ adding: ‘The fact the drone was in the vicinity of the aircraft meant it was dangerous, whether I could see it or not.’

Sentencing him last week, chief magistrate Hilary Glover rejected Miaun’s testimony that he was in control of the drone at all times and told the defendant: ‘You could not reasonably be satisfied that the flight could be safely made. 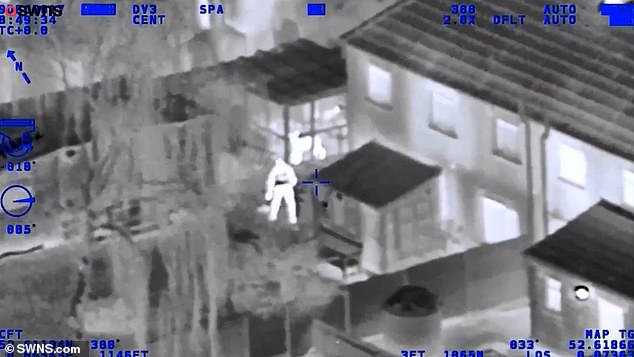 Sergej Miaun, 37, flew his drone narrowly under a police helicopter which could have brought ‘catastrophic’ consequences

‘We consider this to be reckless, especially considering the possible serious consequences of your actions.’

The court heard that he became aggressive when PCSO Lisa Mann was dispatched his house after the crew of the helicopter identified that the small aircraft landed in his garden.

She said he also refused to provide ID and ‘denied flying the drone. He said possibly a neighbour was flying it’.

Acting Sergeant Gore was next to attend the house. He arrested Miaun then searched the property.

He said: ‘It took sometime but I did find it just within the loft hatch in the bathroom, above the bath.’ Miaun was alleged to have told police he kept it there to ‘protect it from the children’.

With the help of a Russian interpreter Miaun told the court that he decided to fly the drone out to the A47 – next to the river Nene – as he saw police lights there and thought there could be an accident. 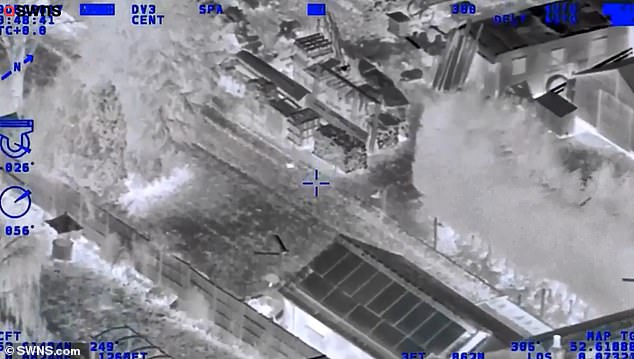 Officers were sent to Miaun’s home, he denied using the drone twice before being arrested

Police were reacting to a call from a member of the public that someone looked in ‘distress’ in the area. It transpired that the police found no one that matched the description given and that no one had gone into the river.

Miaun told the court that after three minutes he realised there was a helicopter and flew the craft back to his garden.

He continued: ‘It was a safe distance. If I interrupted the pilot I did not really want to so I apologise for that.’

Acting Sergeant Darren Gore said: ‘This is the first conviction of this type in the UK. It should serve as a warning to all people flying drones that they need to be operated within the limits of the law.

‘This incident could have ended very differently had the police helicopter not taken evasive action whilst dealing with another serious incident.’