Pancreatic cancer has the lowest survival rate. Symptoms of the ‘silent killer’ often go unnoticed, leading to a late diagnosis.

But the test, developed by Queen Mary University of London, is able to spot warning signs of the disease in the earliest stages.

Early trials of the test – proven to be 90 per cent accurate – have shown it can spot the disease five years before symptoms show.

A leading pancreatic cancer charity hailed the urine test, which gives results within 24 hours, as a breakthrough that is ‘desperately needed’.

The first urine test in the world could increase survival rates by more than 50 per cent if successfully rolled out, scientists have said

Professor Tatjana Crnogorac-Jurcevic has been developing the test, which has yet to be named, for 10 years.

She told MailOnline: ‘The pancreatic cancer most likely grows for a decade or longer so there is a large “window of opportunity” where we can detect it.

‘At the moment, we only detect late stage cancers.’

Professor Crnogorac-Jurcevic believes the test could improve the five-year survival rate to 60 per cent, against the current five per cent.

She said: ‘If we can detect pancreatic cancer when it’s still operable and when the tumours are small and not yet spread to other organs, we could see a significant impact on patient survival.

‘Removing tumours that are 1cm or smaller can increase five-year survival to around 60 per cent.’

The test works by measuring three proteins – LYVE1, TFF1 and REG1B – secreted in the body by pancreatic cancer and present in the urine.

Using an algorithm, a risk score is calculated which will indicate if a patient needs further testing. It is not a diagnostic test, rather a diagnostic aid.

The team at Queen Mary have tested the biomarkers on human samples, publishing their findings in the journal Clinical Cancer Research in 2015.

DIAGNOSIS FIVE WEEKS BEFORE DEATH IS ‘TOO LATE’

Will Chiles lost his wife Claire, 50, to pancreatic cancer in May 2015. They had been waiting for a diagnosis for five months.

He believes she could have had a chance to survive if her condition had been identified earlier, had the urine test been available. 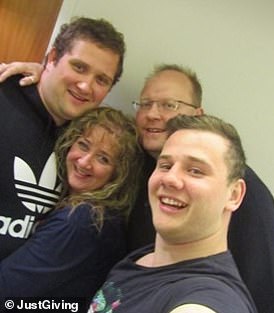 The 47-year-old from Coventry said: ‘We’re not quite sure, but the bottom line is she may well have had a chance, whereas the circumstances we went through she didn’t have a chance, it was a death certificate basically because she only got diagnosed five weeks before she died.

‘She had no chance, she didn’t even have a chance to get chemotherapy, so it could mean the difference between life and death.’

He added: ‘Something like this comes through, if it means somebody’s odds are better to live, to survive, then it’s a no-brainer.

‘Whereas from our perspective we just didn’t know. And when we did know, it was just too late.’

Mr Chiles has raised more than £10,000 for Pancreatic Cancer Research Fund on JustGiving.

The 3,000 participants will be sourced be referral by their GP if they have suspected symptoms, or if they have a family history of the disease.

The study is expected to take around four years, but if it’s successful, it will be ready to be used by clinicians immediately – if approved.

Professor Crnogorac-Jurcevic said: ‘In around ten per cent of pancreatic cancers, there is family background.

‘Those individuals are currently being tested using invasive procedures so the compliance isn’t great.

‘They may have imaging with CT scan, MRI, or an endoscopic ultrasound scan (EUS) together with a biopsy if a diagnosis is still not clear after having a CT scan.

‘An EUS is very unpleasant and you have to be sedated.’

During an EUS, a thin, flexible tube is passed through the mouth and down into your stomach to collect images of where cancer may be.

Professor Crnogorac-Jurcevic said: ‘We would like to establish the accuracy of our test compared to radioactive imaging to see if they are as good or better, and then implement it before those tests need to be done.’

Pancreatic cancer strikes 9,100 people in UK and 56,770 in the US each year, according to estimates.

A quarter of patients with the disease die within a month of being diagnosed, and three quarters will die within a year.

Dr Chris MacDonald, head of research at Pancreatic Cancer UK, said: ‘A non-invasive test to help provide earlier diagnosis for pancreatic cancer is desperately needed if we’re to see the first improvements in survival for decades.

‘Pancreatic cancer is incredibly adept at evading detection by our immune system, and its vague symptoms – like back pain or indigestion – pose a huge challenge for doctors.

‘All too often the disease is able to develop unnoticed until it is tragically too late for patients and their loved ones.’

Although early in its development, Dr MacDonald said the urine test is a good example of innovative research to find indicators of pancreatic cancer.

He said: ‘It is the quickest killing cancer, yet decades of underfunding have delayed the breakthroughs we so badly need to see.’

PANCREATIC CANCER: WHAT ARE THE SYMPTOMS AND STATISTICS?

Pancreatic cancer often doesn’t cause any signs or symptoms in the early stages. This can make it hard to diagnose early. As the cancer grows, it may start to cause symptoms. The symptoms and how bad they are can vary for each person.

Around 10,000 people are diagnosed with pancreatic cancer per year in the UK – 27 people every day.

Some evidence has suggested that alcohol, red and processed meat, blood group and gallstones or gall bladder surgery may also increase your risk.