The floral copy queens: How these stars have blossomed by taking a leaf out of the royal style book

The floral copy queens! How these glamorous stars have blossomed by taking a leaf out of the royal style book

By Karen Millen For The Daily Mail

Meandering through Selfridges recently, I felt like I had been granted a private viewing of the Queen’s dressing room, such was the array of bright, flowery prints.

Such florals — long the design of choice of our monarch — are no longer the preserve of old ladies and little girls, but the height of fashion and the go-to look for some of our most high-profile celebrities.

Indeed, when Boris Johnson’s girlfriend Carrie Symonds arrived at Downing Street this week in a pink floral dress by Ghost, I was struck by how similar it was to one Her Majesty has enjoyed.

It wasn’t my only sense of deja vu.

When Jenna Coleman, the actress who played Queen Victoria, arrived at the Cartier Queen’s Polo Cup final in a mid calf-length dress with a blue, pink and white floral design, I noticed its resemblance to one worn by the Queen at the Derby Festival last year.

Even Dame Joan Collins appeared to take a leaf out of Her Majesty’s style book when she attended Royal Ascot.

Mirren image! Playing the Queen was not enough for Helen Mirren who channelled Her Majesty’s blue floral dress at a premiere

Throughout her 67-year reign, the Queen has fallen back on her favourite design at countless events and has inspired Hollywood stars such as Margot Robbie

Dressed in a pale-pink, mid-length number emblazoned with lilies and leaves, the similarities between her outfit and one worn by the Queen at Windsor Castle were striking.

And it’s hard not to spot just how many celebrities — from TV presenters Holly Willoughby, Susanna Reid and Charlotte Hawkins, to Hollywood A-listers Helen Mirren, Margot Robbie and Rachel McAdams — are emulating the style of Her Floral Majesty!

So perennial is our monarch’s love of decorative blooms that it was her print of choice for the christening of her only daughter, Princess Anne, back in 1950. 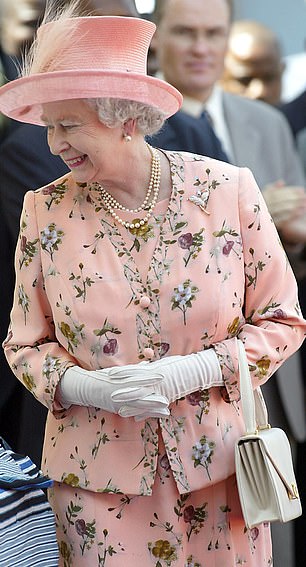 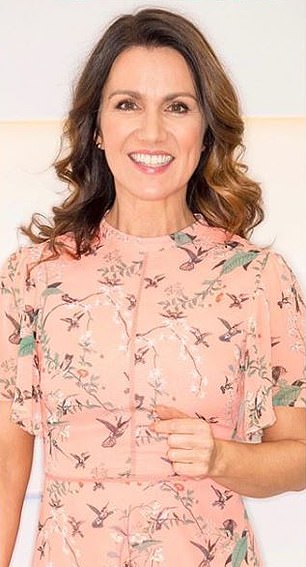 I’m sure it’s no coincidence she chose it for her girl’s special day, given it is a look we associate with femininity.

Throughout her 67-year reign, the Queen has fallen back on her favourite design at countless events and, in this respect, she appears to have been ahead of her time.

While rose and daisy designs look great with court shoes on older women, they are also fabulous dressed down with wedges, or even Dr Martens on teens and twentysomethings.

The key to making florals look less mumsy or childlike is to pair them with the unexpected — boots, a leather jacket, heavy knitwear, or chunky jewellery — to give them a bit of an ‘edge’.

We know, thanks to her interview with Sir David Attenborough, that the Queen loves her garden.

Many of us are now discovering what Her Majesty has long known: that carrying a little bit of this beauty around with you day-to-day is a great way to raise not only your own spirits, but those of everyone you meet.

As told to Helen Carroll